Willian church, Herts - a matter of Life and Death 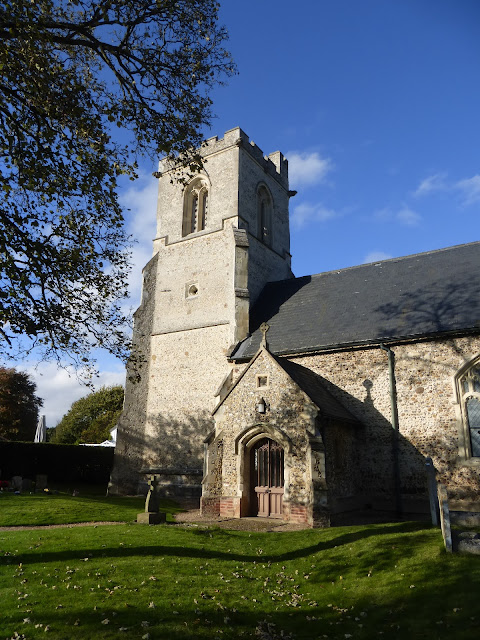 Willian, more so than the two other villages among which Letchworth Garden City has been built (Norton and Letchworth), retains its own individual identity; this, I think, is partly because of its relatively prominent church. Norton's church is down a cul de sac, while Letchworth's is small and hidden away, but Willian's, despite being behind a pub, has a proud, unmistakeable Perpendicular tower, easily visible to anyone passing.* 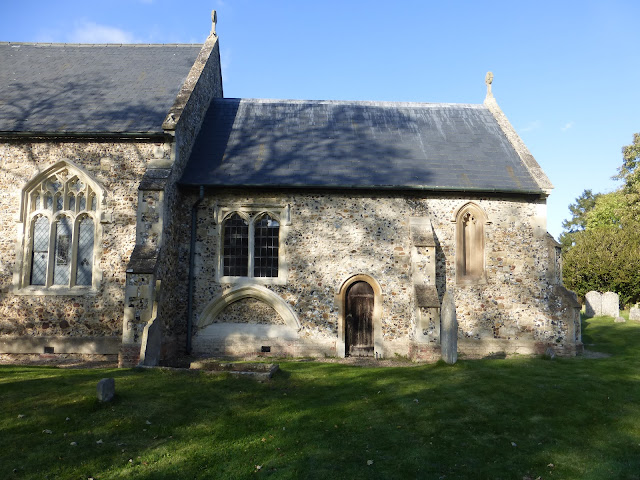 The flint church as it stands now looks entirely Perpendicular, say c. 1430, but a round-headed doorway in the south wall of the chancel reveals its Norman origins (like that of Norton and Letchworth); most of the external details were throughly restored in 1870.

The west doorway seems to be largely original; the shield on the left has the Instruments of the Passion, while that on the right is heraldic. 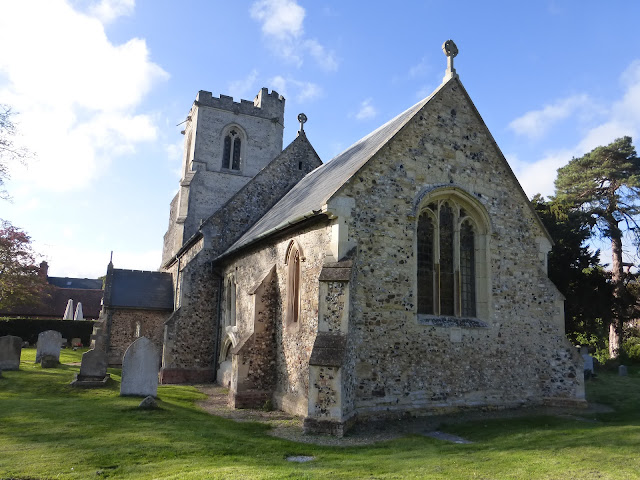 The east window dates from when the chancel was reordered, 1823, that is, before the fully-fledged Gothic Revival had got under way. (Both the Royal Commission on Historical Monuments and the Victoria County History state that the window is genuine 15th century work; I prefer to rely on James Bettley's judgement in his revision of Pevsner's Buildings of England volume, and the evidence of my eyes.)
The interior of the nave is cavernous - the high, dark roof dates from the 1870 restoration - and plain. Most of the interest is found in the chancel. 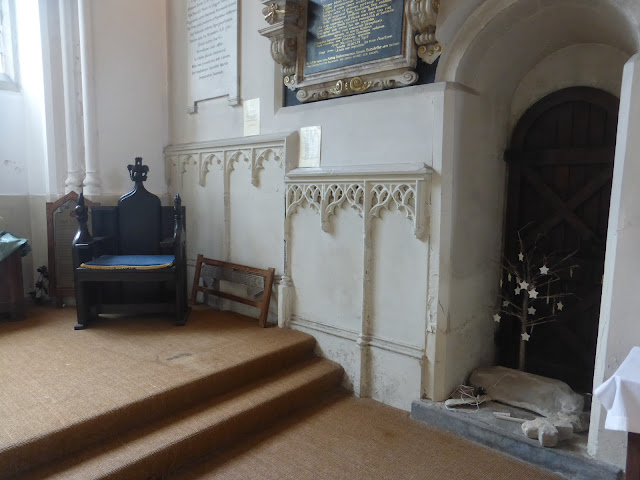 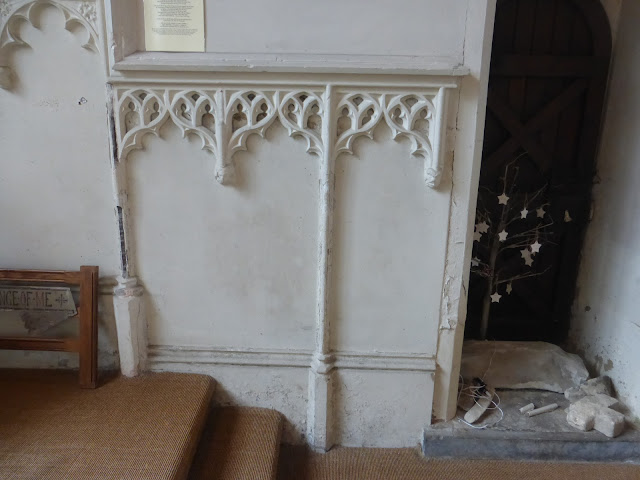 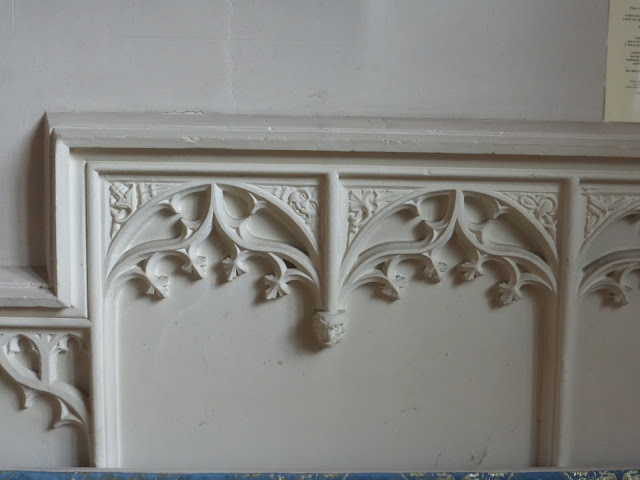 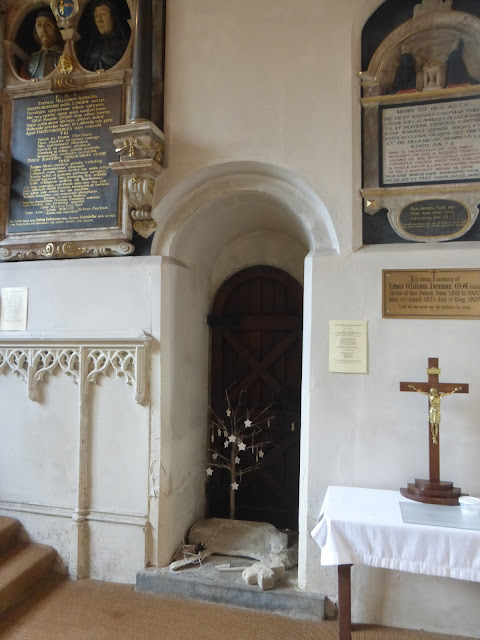 In the chancel there's blank arcading on the lower walls, from 1823. It's made of Roman cement, not carved from stone as it would very probably have been had it been medieval, but it is pretty, and surprisingly accurate for its date,  a good imitation of work of the earlier 14th century. 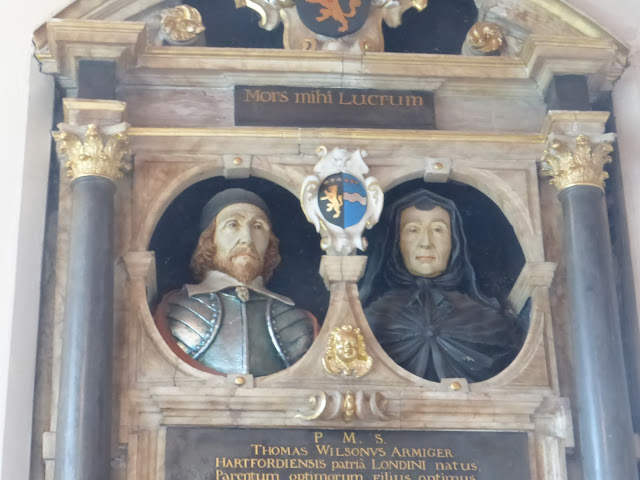 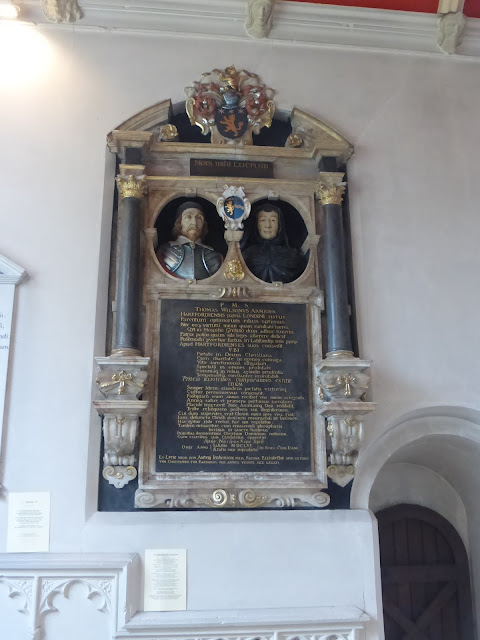 There are some appealing monuments. My favourite is this one, to Thomas (d.1656) and Lucy Wilson, presumably made during the Protectorate. The two busts are almost hyper-realist, so life-like is the painting (how closely the painting matches the original I don't know). She is dressed in mourning (presumably the monument was made in her lifetime), and seems to have an enormous star on her chest, like some kind of extravagant medal. 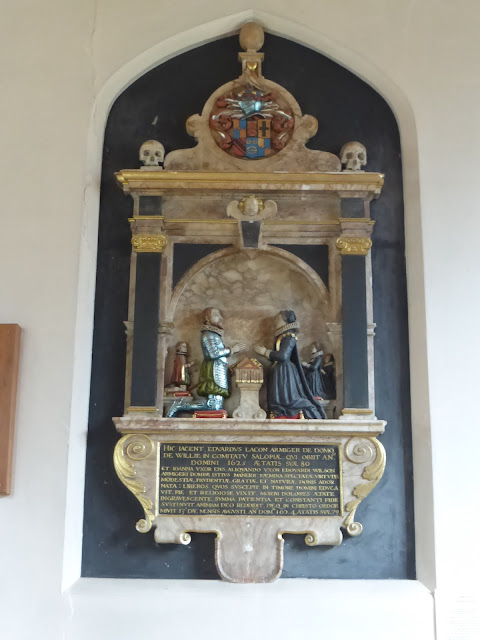 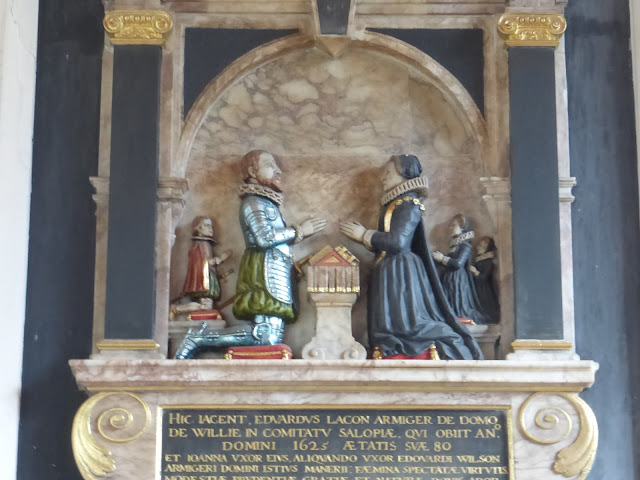 Edward (d.1625) and Joan (d.1624) Lacon, who both lived to a good age (80 and 79 respectively). Only three children are depicted; the younger daughter is tucked away like an afterthought behind her big sister. 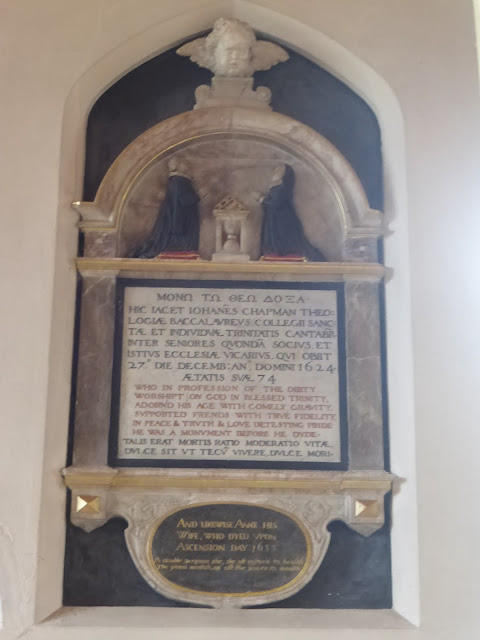 John (d.1624) and Anne Chapman. He was the vicar of Willian. Nearby, on the southern fringe of Letchworth Garden City, there's a road called Chaomans. I've heard it claimed that this was originally intended to be Chapmans, perhaps after this vicar (or maybe after George Chapman, the 16th/17th playwright, poet and translator who was born in nearby Hitchin), but a misspelling crept in and has stuck. (On the other hand, Chaomans is a 'real' name, so possibly it wasn't a  mistake at all.) 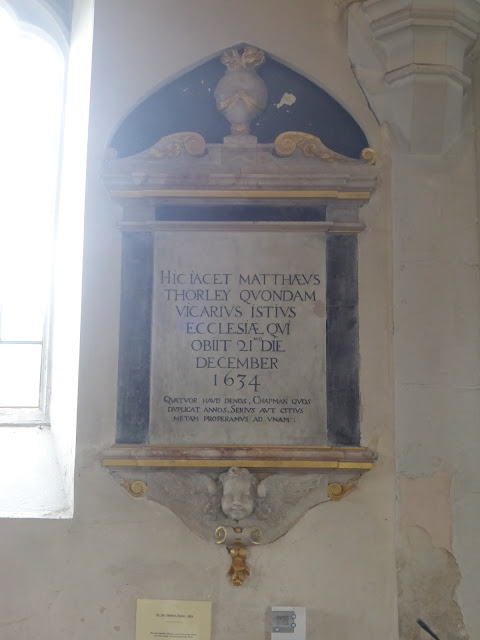 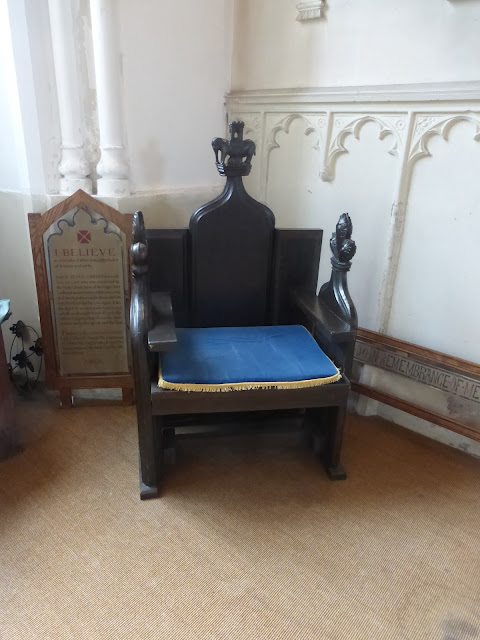 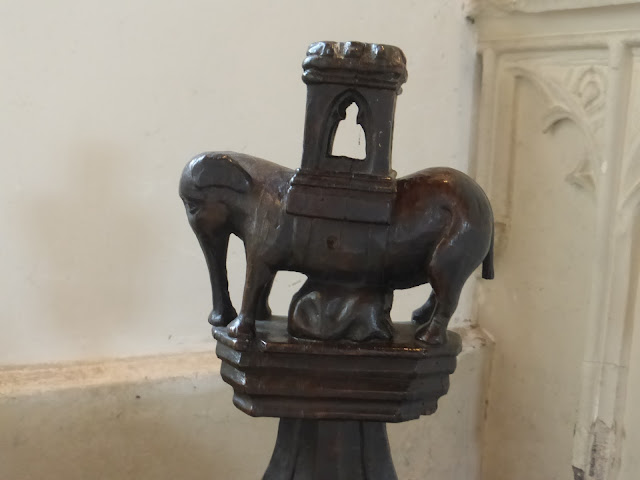 The church's most charming artefact by far is this 15th century carving of an elephant and castle, from St Andrew's in Biggleswade, Beds. It first came to Willian in the 1820s and was incorporated into a chair in 1974. I'm trying to think of other Hertfordshire churches with representations of elephants; maybe there are others, but all I have so far are the corbels at Watton-at-Stone.
To see the church's most striking objects, however, it's necessary to step back outside and look up to the top of the tower. There are four large grotesques** and four smaller carvings. They are all closely modelled on the 15th century originals, but these were found to be so decayed as to be unsafe and were replaced with copies in 1996. (The originals are in the care of the Letchworth Heritage Foundation, though as far as I know they're not on public view.)
The copies were made by masons from the Cambridge firm Rattee & Kent, founded in 1848 and well-known for its conservation work on historic buildings. Just before the masons moved to work on Willian's figures they'd been carving saints to go on the facade of Westminster Abbey. 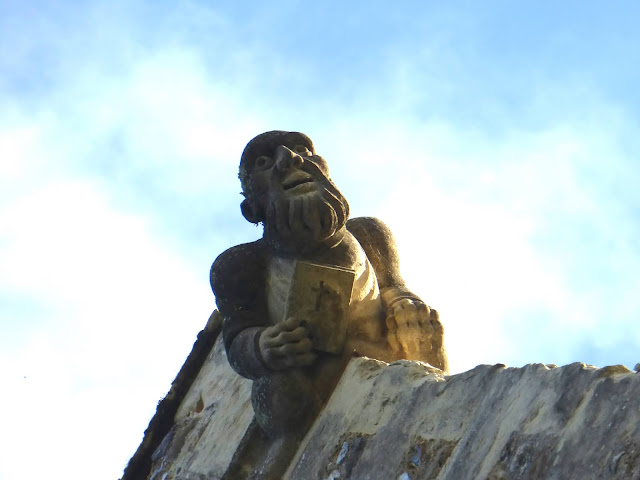 This bearded figure represents a Saint; the book he holds is presumably a Bible. 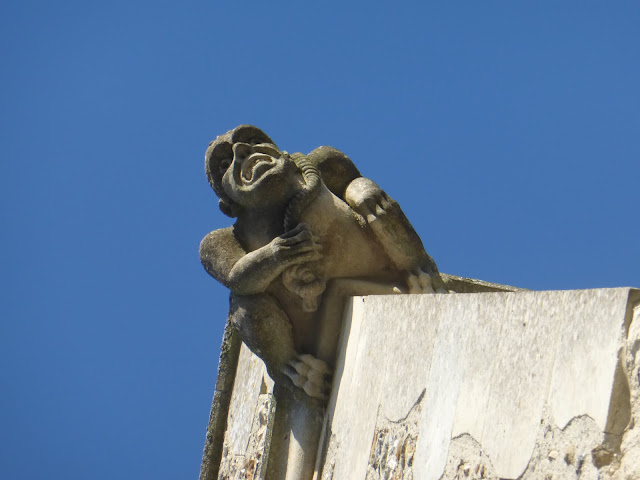 This is Life; his expression is said by the church history (by Peter Harkness) to be 'cheerful', but to me it looks more like a fixed grimace. Perhaps I'm looking at him from an unfortunate angle. He has a bag slung over his shoulder. 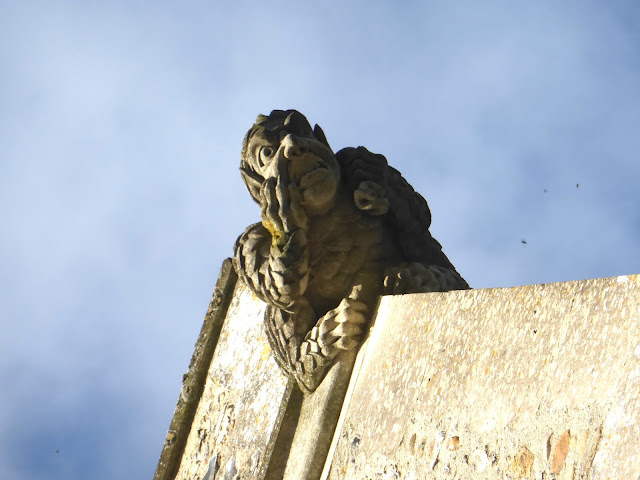 Neither of the first two figures are truly grotesque, but the last two more than make up for this. This is the Devil (the antithesis to the Saint on whom he turns his back), with scaly skin, long claw-like fingernails, pointed ears and staring eyes. He seems to be clinging creepily on to the tower top, as if he's poised to leap or slink down at any moment. 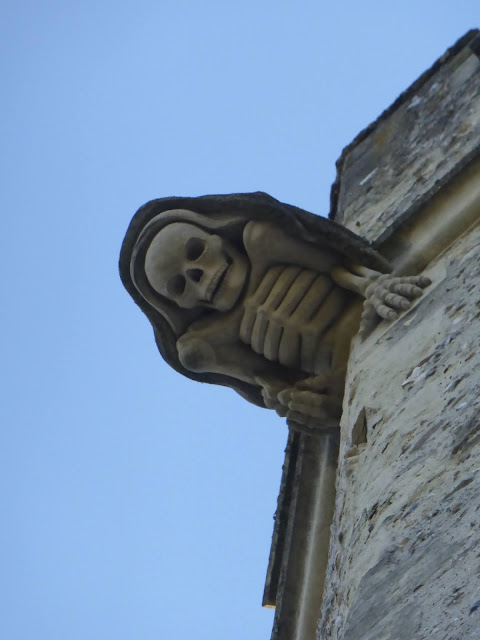 Lastly, this splendid skeleton represents, of course, Death, the antithesis to Life, peering, hollow-eyed, inexorably down at us, a reminder that our lives can have only one end.
Which seems a suitable, if grim, way to end this. Willian, like Letchworth and Norton, is usually locked and hard to get into.
* Willian and Letchworth churches are only half a mile apart. Except for Great and Little Hormead (c. 0.3 miles apart) these seem to be the two churches of medieval foundation closest to each other in the county. Caldecote and Newnham are fractionally further apart (c. 0.6 miles).

** They're sometimes called gargoyles, which strictly speaking is incorrect as gargoyles are grotesquely carved waterspouts - indeed, the word 'gargoyle' derives from words meaning 'throat' and 'gargle'. However, language is democratic and words come to mean what the majority of people who use them mean by them, and maybe 'gargoyle' now means any grotesque carving whether or not it spits water. 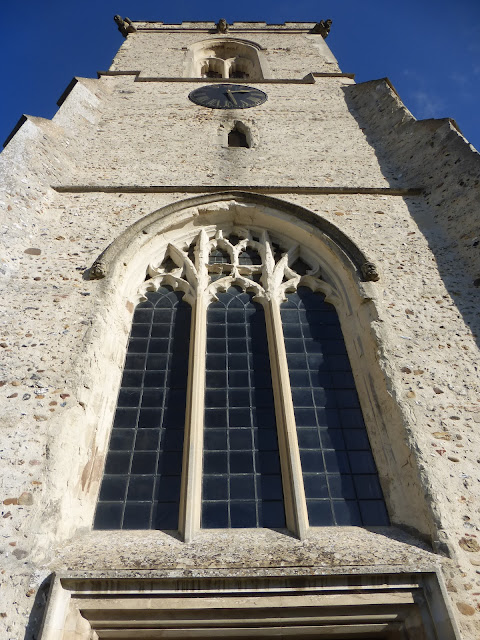 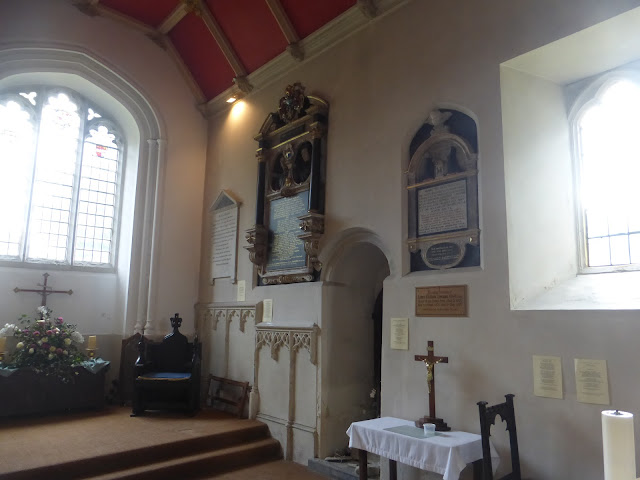 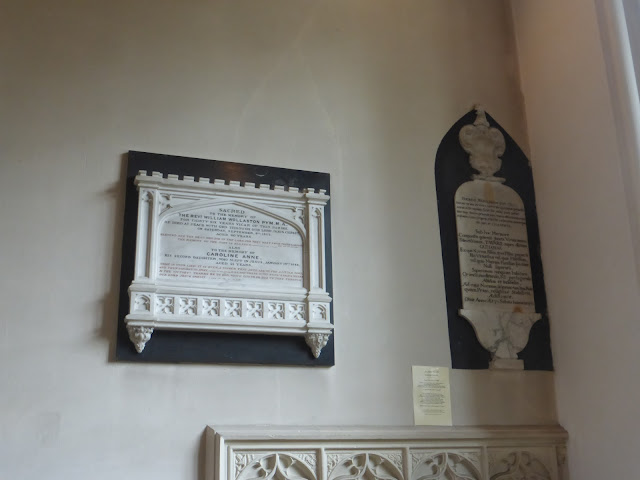 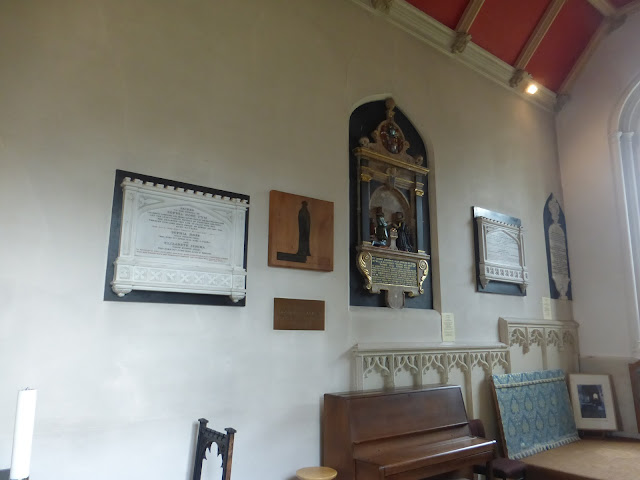 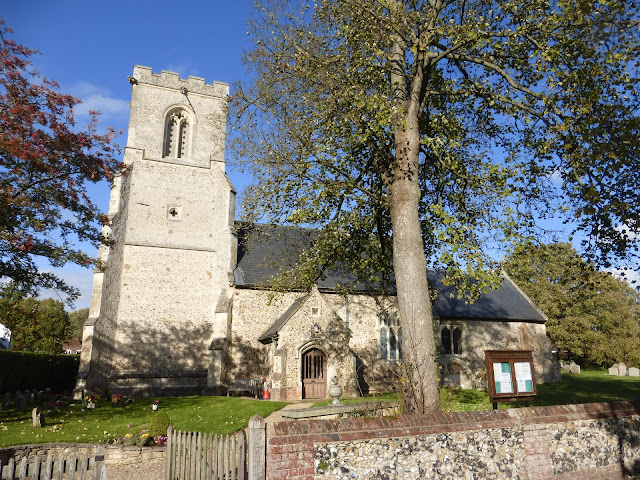 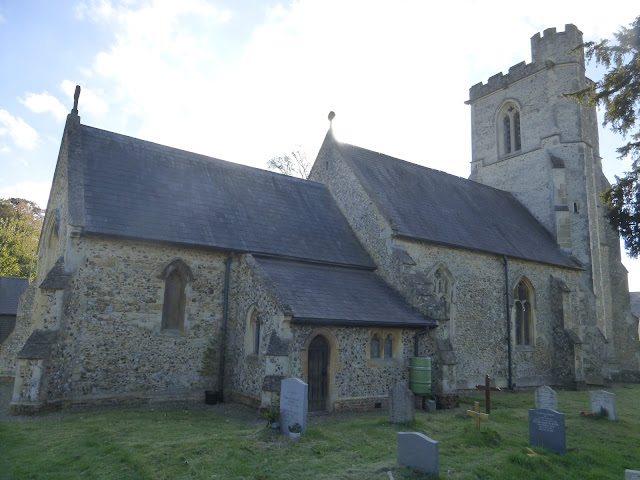 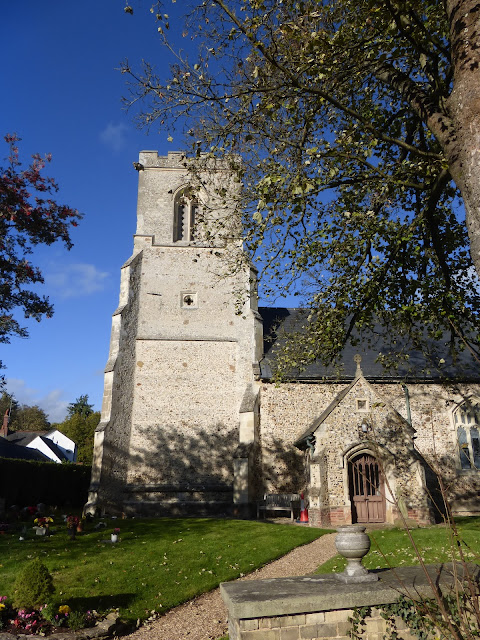 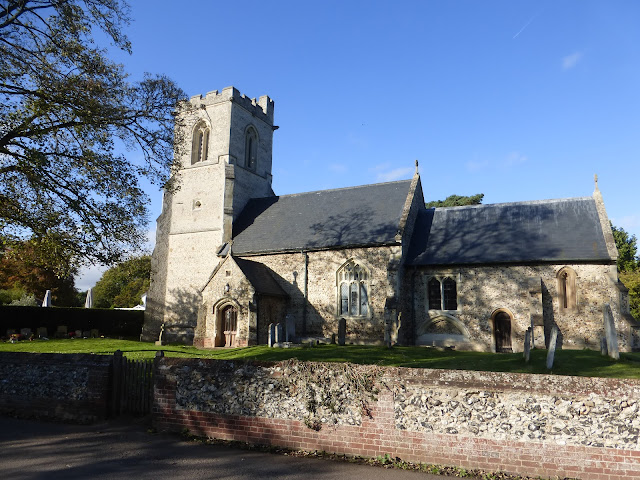 Posted by David Gouldstone at 17:19