Last week I had an hour to spare in Surrey (a county I've mostly overlooked), and decided to pick a church at random to visit. The map revealed that Worplesdon was just a few miles away, so Worplesdon it was. I knew nothing about it, though when I arrived the tower, visible from the road, revealed that the church was an at least partly medieval structure, and thus that there was a reasonably good chance of finding interesting things inside. Entry is by the west door, and before I'd gone more than a few paces down the nave I noticed that the easternmost window of the north aisle contained what looked like 14th century glass - an exciting discovery. 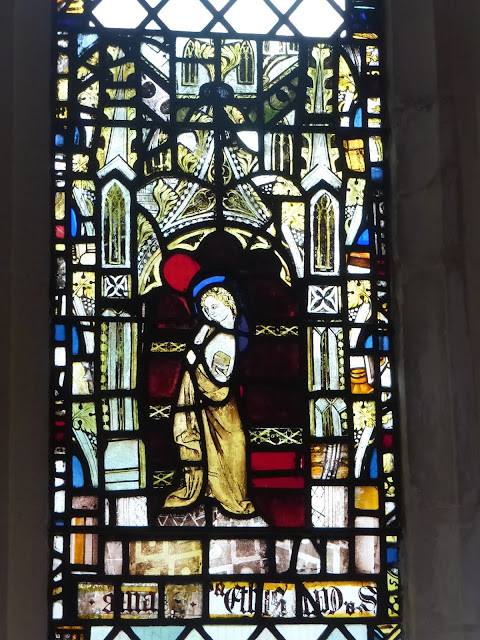 It's the verdant green* of the figure on the left (at the top of the page) that is the first and most obvious clue to its date. The figure on the right is posed in an S-shaped curve, another very typical feature of the 14th century, related to the S-curves, known as ogees, found in the coeval Decorated style of Gothic architecture. The abundance of yellow glass, unknown before the early years of the century, is another aid to dating. This glass is undoubtedly both decorative and Decorated.

The figures are protected by imposing canopies, which also exhibit ogees and are complete with fictive windows, and are surrounded by a jumble of fragments. 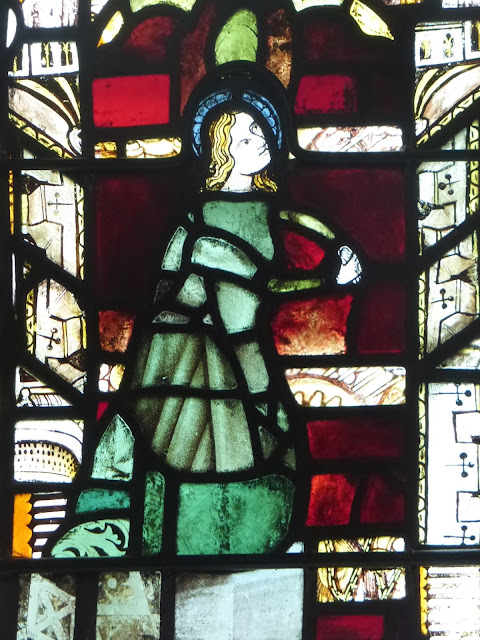 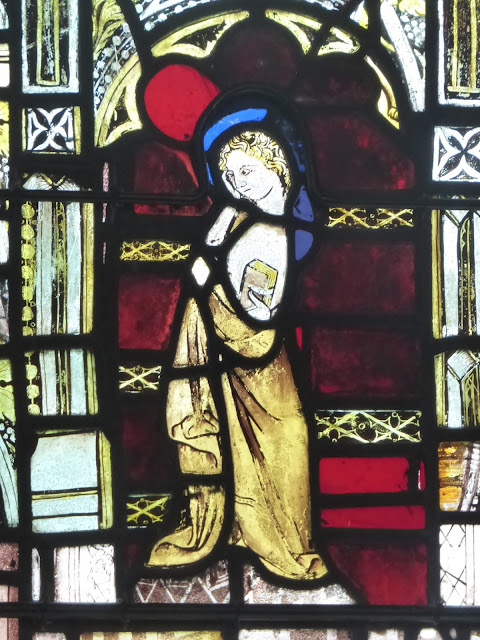 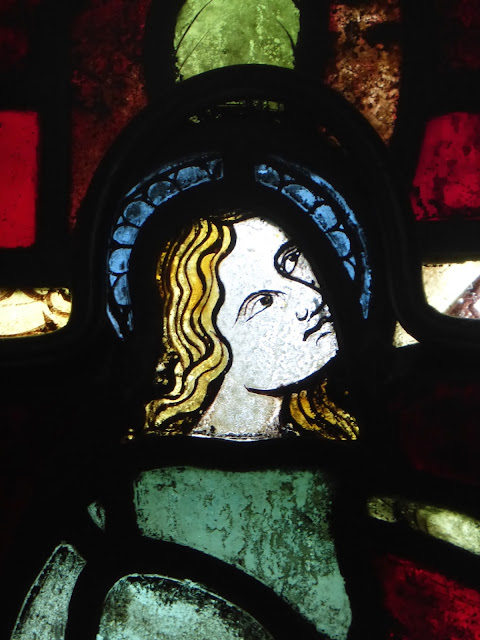 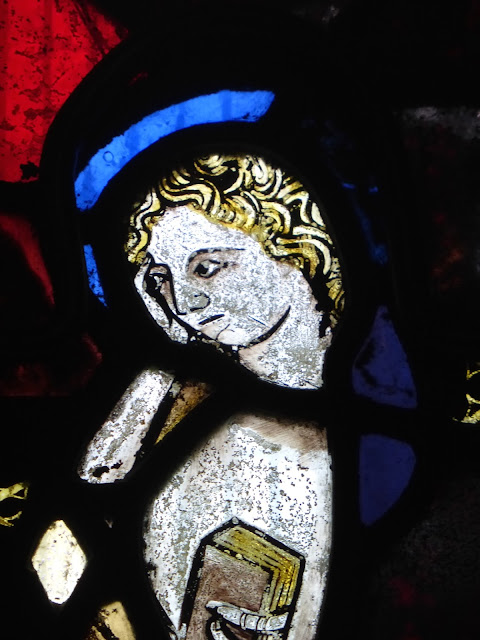 What or who do the figures represent? They have no attributes, except haloes (definite on the left, only probable on the right), and a book. Cowen calls them saints; the Shell Guide and Pevsner fail to commit themselves and describe them simply as figures. Osborne,** on the other hand, says that the scene is an Annunciation (in which the angel Gabriel tells Mary that she is to be the mother of Jesus), and I agree that this is the likeliest interpretation, as Mary is generally portrayed with a book to underline her serious, scholarly nature. She seems to shrink a little from the news, and clutch her gown protectively. 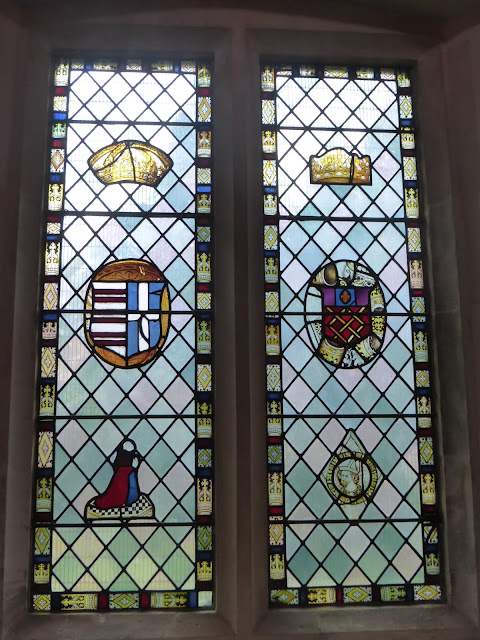 Osborne also says that this glass was originally in the east window, but was removed in 1887 to make way for the current Clayton and Bell glass. Some more medieval glass survives in another north aisle window, including: 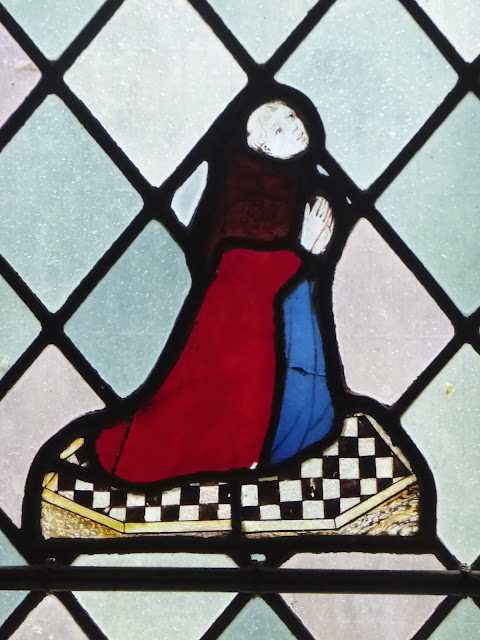 A monk or priest kneeling on a chequered tiled floor. Note the complete lack of perspective; when, a century or so later (in Italy), artists started to use geometrical perspective they often used tiled floors to demonstrate their skill and give a sense of depth to their pictures. English artists took until the 16th century to adopt this technique. 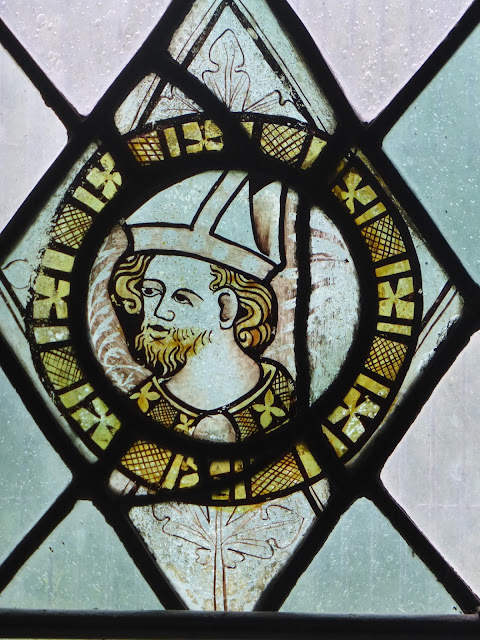 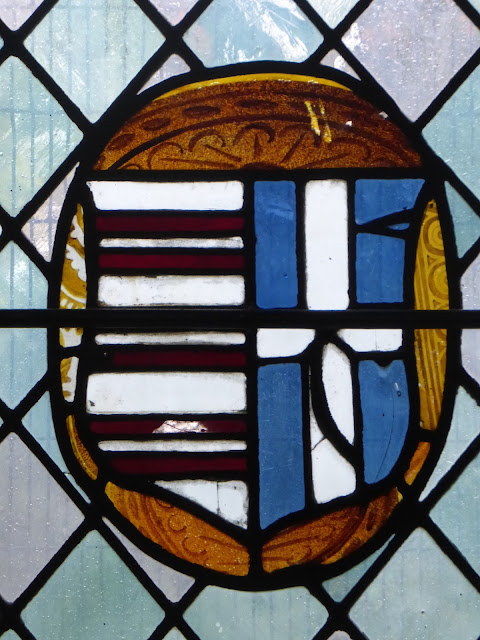 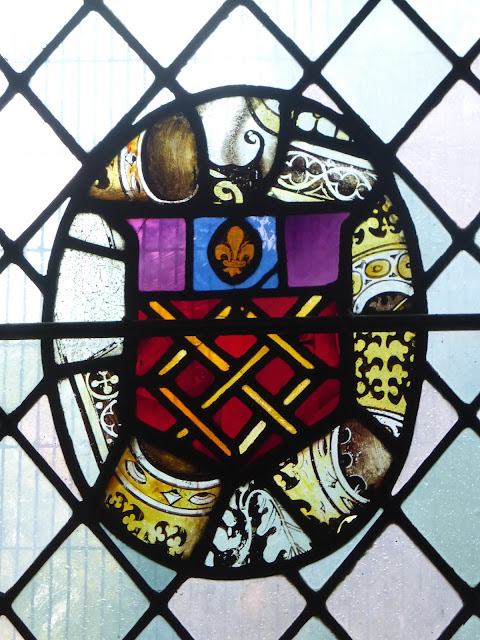 Two shields. The technical terminology for the first one is Argent three gimel bars gules impaling azure a cross argent. I've got only a rough idea what that means, but nevertheless I can savour the language.

The south aisle has two more windows with shields, and the date 1802, which was when they were put in their present positions: 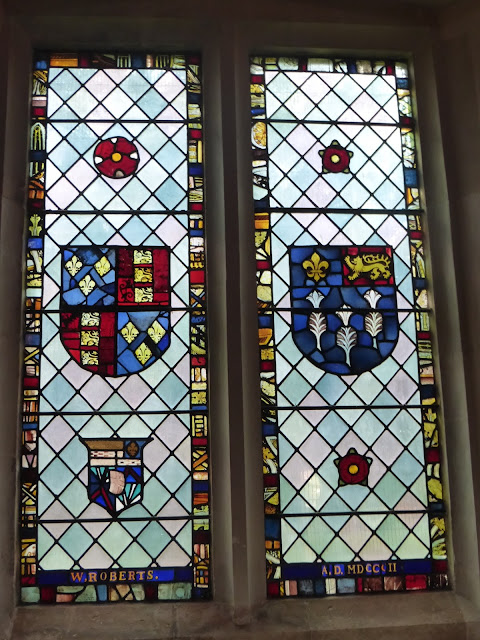 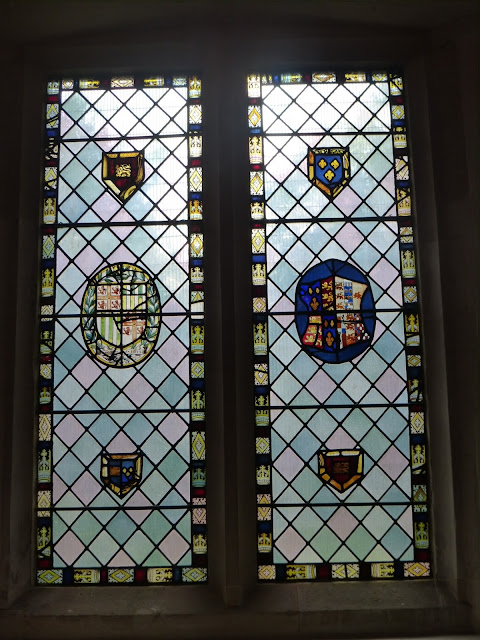 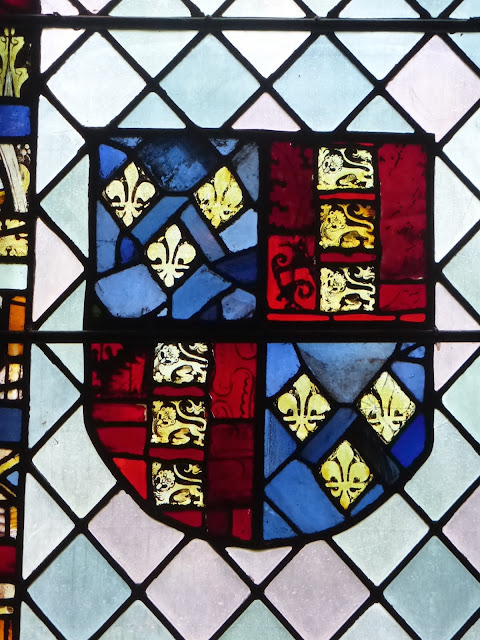 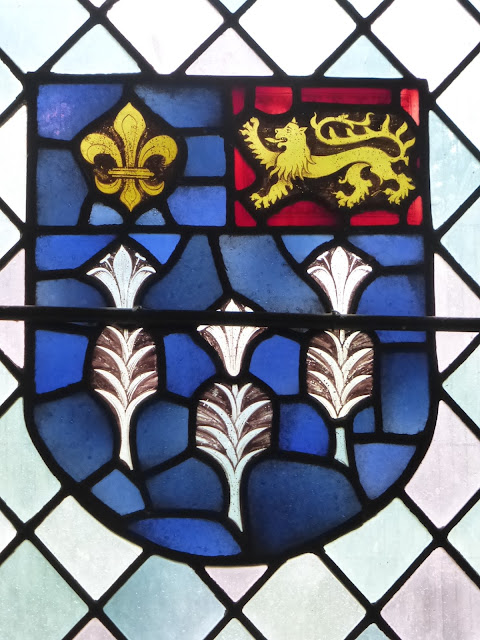 The arms of Eton College; the three flowers are lilies. The pulpit and font in the church were brought from Eton. 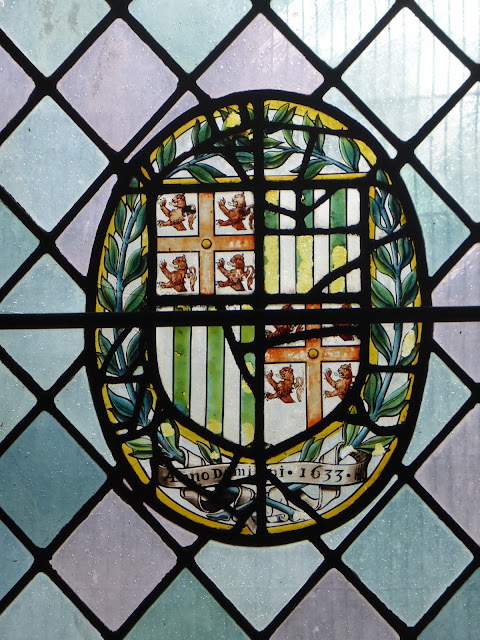 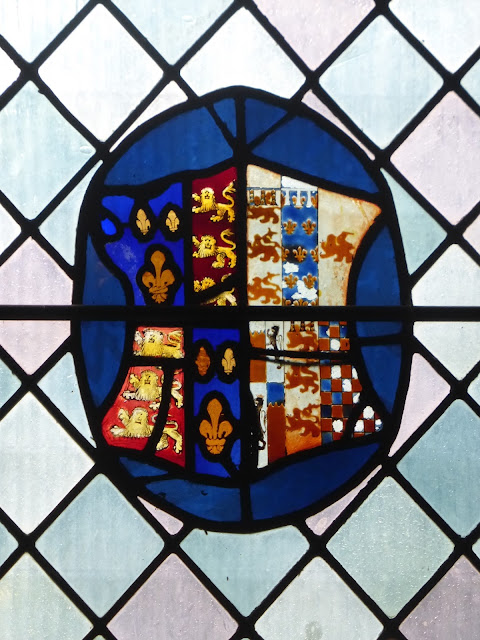 The arms of Henry VIII impaling those of Ann Boleyn, which must date from their short marriage (1532-36). 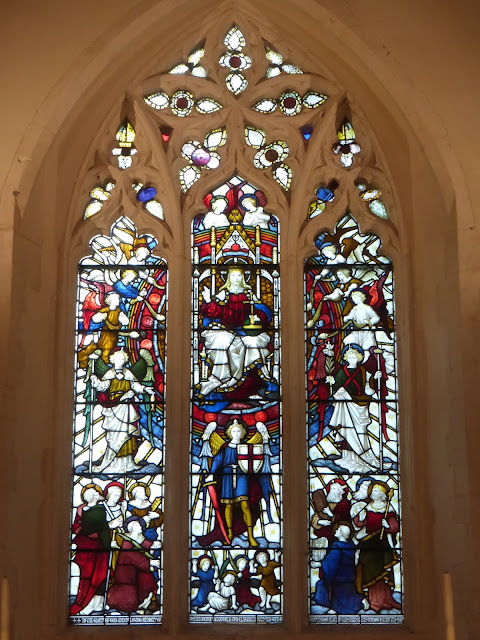 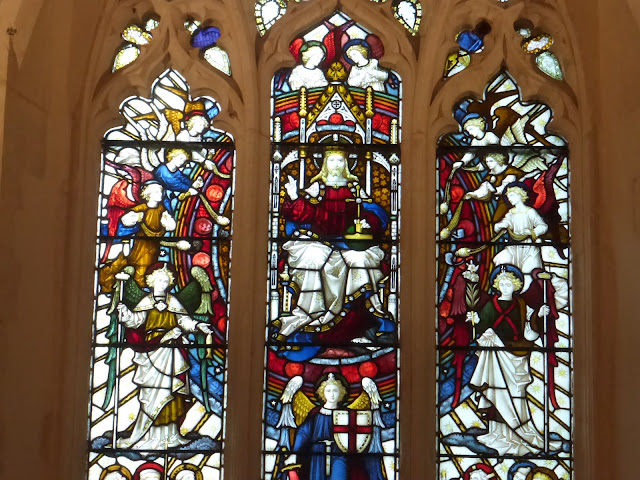 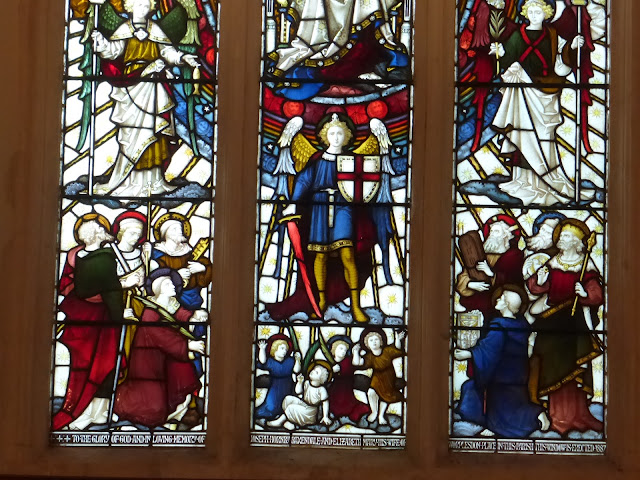 The east window was made by the distinguished Victorian company Clayton and Bell in 1887. It shows Christ in Majesty; the top half is the most successful part of the composition. 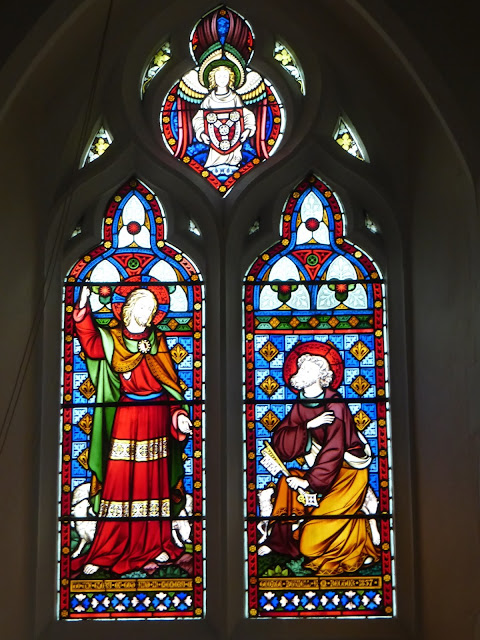 There are several other worthwhile Victorian windows, including this one from 1858 by James Hardman & Co, showing Christ with St Peter.

I started this post with thoughts about how to identify 14th century glass. Back in the early summer I revisited a church I hadn't been to for many years, Aldermaston, Berks, which had stuck in my mind for decades largely because it's the home of some gorgeous glass from the previous century. (The floriated grisaille glass surrounding the roundels is of course Victorian.) 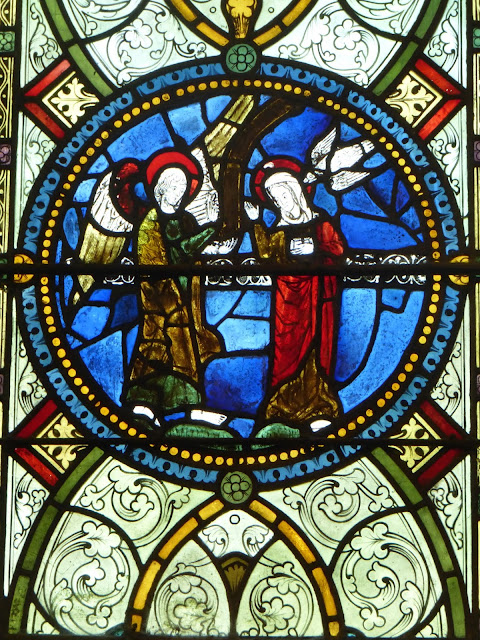 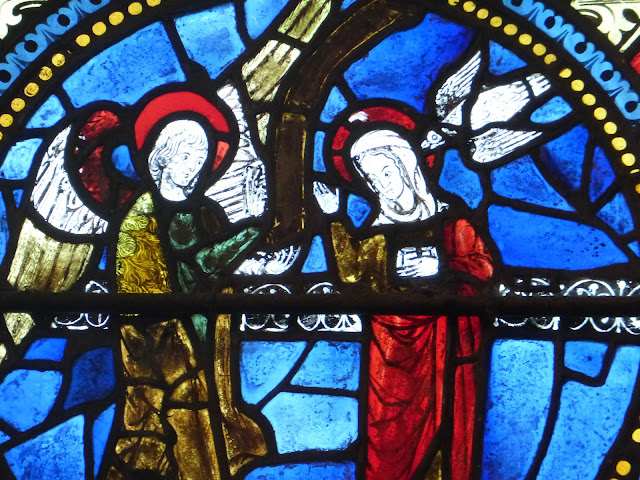 The first one shows the Annunciation. Unlike the Worplesdon example, Mary greets Gabriel with composure. The Holy Spirit in the form of a dove, looking like an amateurishly stuffed specimen, whispers the glad news in her ear. 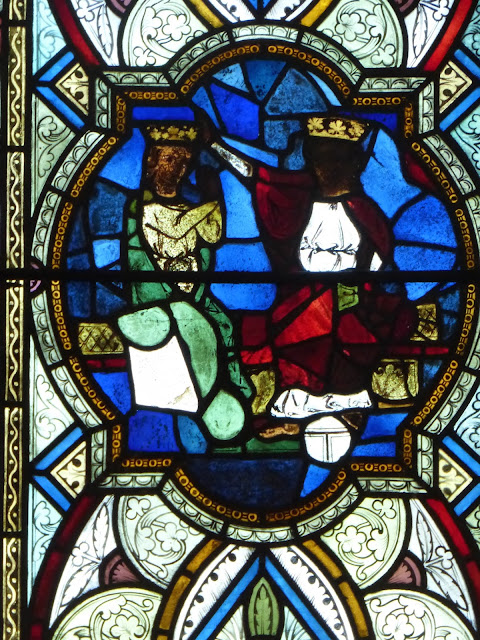 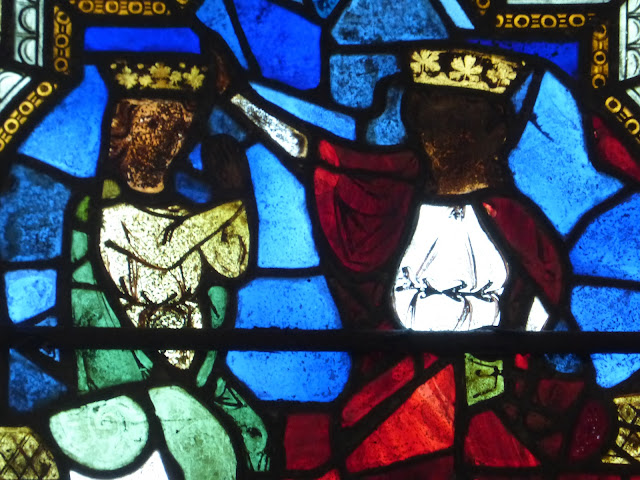 The Coronation of the Virgin. The faces are badly decayed, but the figures still have dignity.

The most obvious difference between these 13th century roundels and the 14th century figures in Worpleson is the colours. Blue predominates, and this is the defining colour of glass corresponding to the Early English style of architecture. The technology necessary to create yellow glass didn't yet exist, but there are strong reds and greens. There are no canopies. The poses of the figures are stiffer in the earlier period, more theatrical and hieratic. Objects are drawn as if a symbol rather than a direct visual representation was intended (as in the depiction of the dove). The designs are generally more linear, geometric and two-dimensional, less realistic. Even when they tell a story, as they often do, they're static.

Some of this might sound as if I'm being critical of 13th century glass, but I think that it is often supremely beautiful, deep blue backgrounds and all. Stained glass, because it's generally viewed from a distance, works best in large, even extravagant gestures, and as symbolism rather than detailed realism. It's possible to argue that stained glass design reached its peak in the 13th century, and a long slow decline followed.

I've got the Early English blues, and I trust that I'll never lose them.

* I should point out that I'm among the one in twelve men who are colour blind. (Only one in two hundred women are similarly afflicted.) Although this obviously doesn't mean I can't see colours, my comments on the subject should always be taken with a pinch of rainbow.

** Painton Cowen, A Guide to Stained Glass in Britain; June Osborne, Stained Glass in England. These two books are indispensable to anyone with a more than passing interest in the subject.
Posted by David Gouldstone at 17:52 No comments: 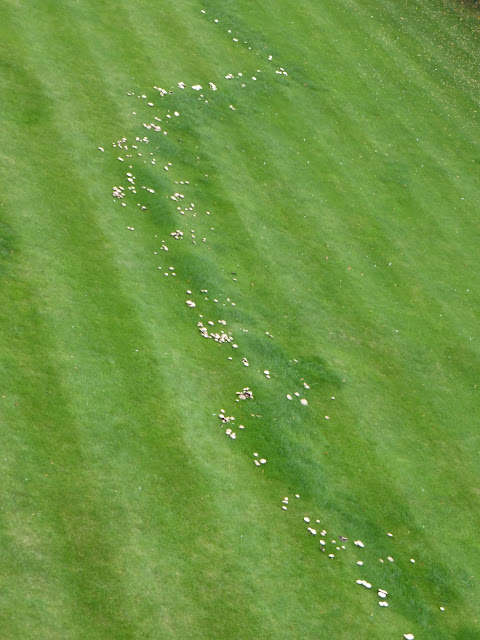 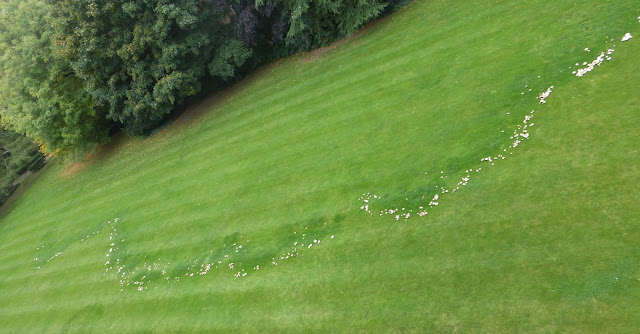 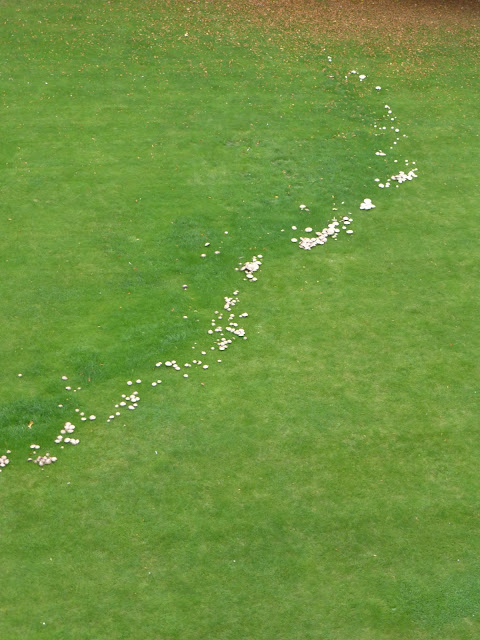 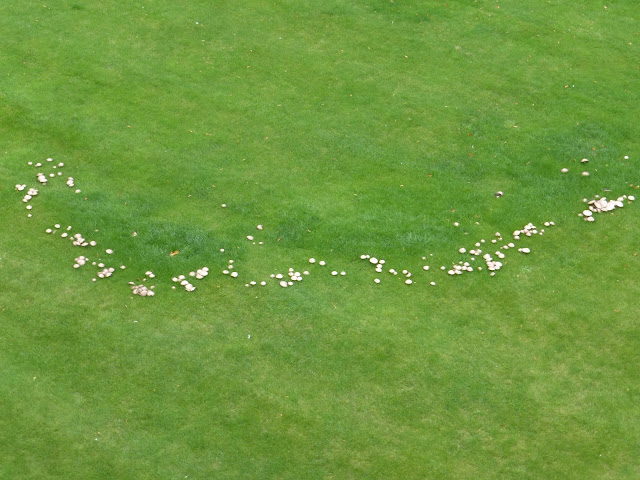 Posted by David Gouldstone at 17:54 No comments: