Spot the difference. Why I don't like King's College chapel, Cambridge 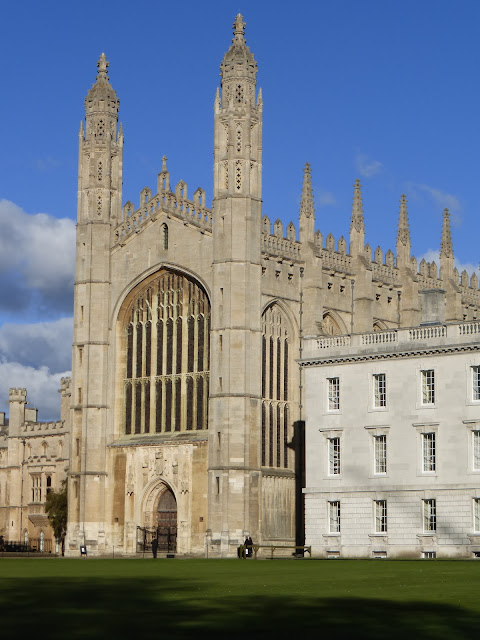 Let me admit from the start that the statement in the title of this post is most shamelessly designed as clickbait. 'Why I have some reservations about King's College chapel' would be more accurate, but the standard journalistic practice is to polarise views, to push everything to extremes in order to make them more dramatic and saleable. Emotions have to be turned all the way up to eleven in an effort to get heard. No one's going to read an article headlined 'I'm on the fence about Brexit' or 'I'm still in two minds about Trump'. Perhaps I should go the whole hog and give this post a no holds barred screaming heading:

WHY I HATE KING'S COLLEGE CHAPEL

If I thought that doing so would gain thousands of pageviews and 'go viral' then maybe I would indulge myself, but as whatever I write won't be read by more than a few hundred people I'll stick with the mild exaggeration of 'Why I don't like King's chapel.' 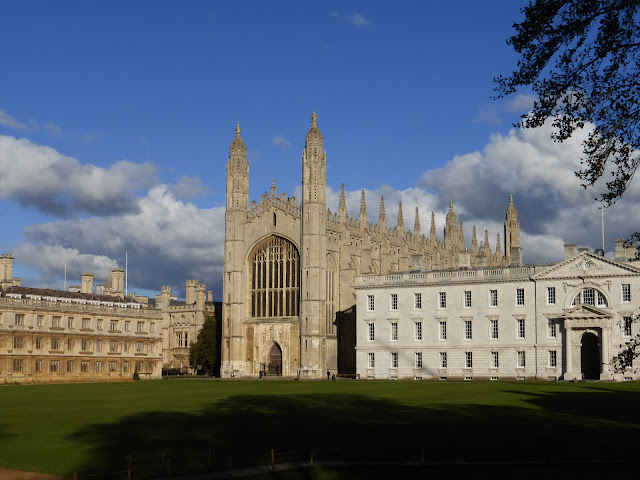 I'm very happy to agree that the view from the Backs* is justly one of the world's most famous; if anything deserves to have that much overused word 'iconic' applied to it, this view does. The chapel (built 1448-1515, though furnishing and glazing took a few more decades) is greatly enhanced by, on the right, the classical elegance of the Gibbs' Building (1723-9), and, on the left, the south range of Clare College's Old Court (1638-42). 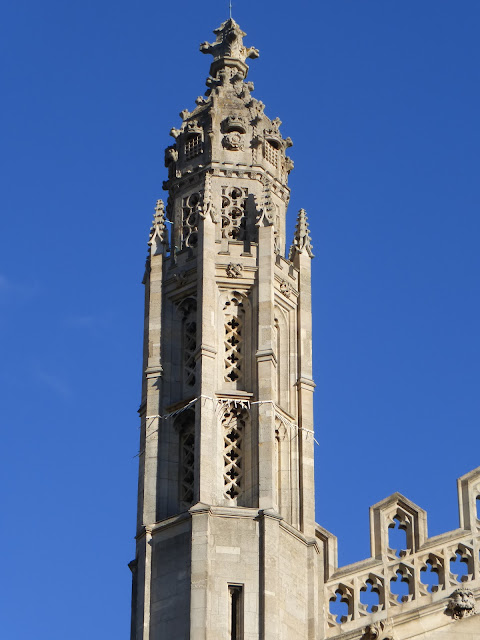 The chapel's pinnacles and turrets are a grand sight. From this perspective the chapel is stately with more than a touch of confident swagger. 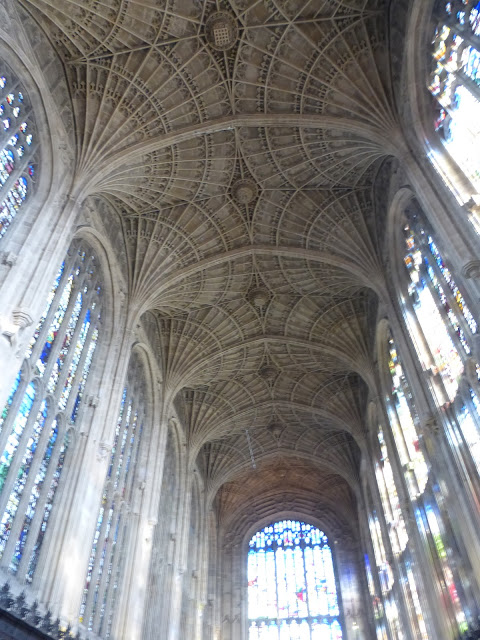 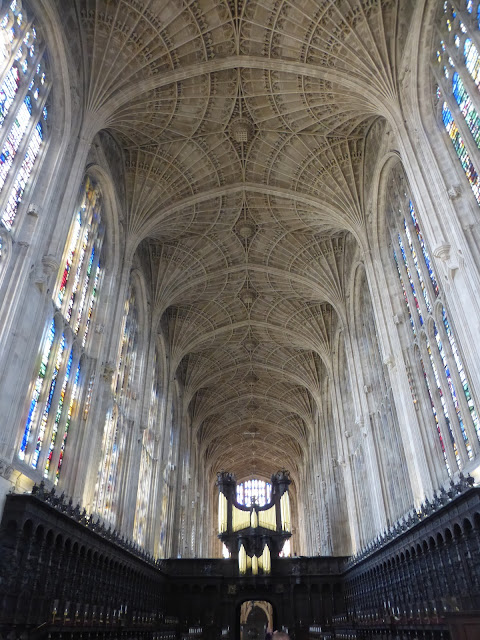 I also admit that the fan vaulted ceiling, poised effortlessly above walls that seem to be made of almost nothing but glass, is mightily impressive, the screen is terrific and the windows, though very busy and not as beautiful as they would have been had they been made two or three centuries earlier, are endlessly fascinating and historically of great importance.

So what's my cavil with King's? Why do I chastise the chapel? (And why do I belabour the alliteration?) Let's begin with the exterior.

As I say, a view from the ordinal compass points is very fine. However, I'm not so sure that the chapel is particularly satisfying when seen from the cardinal directions. 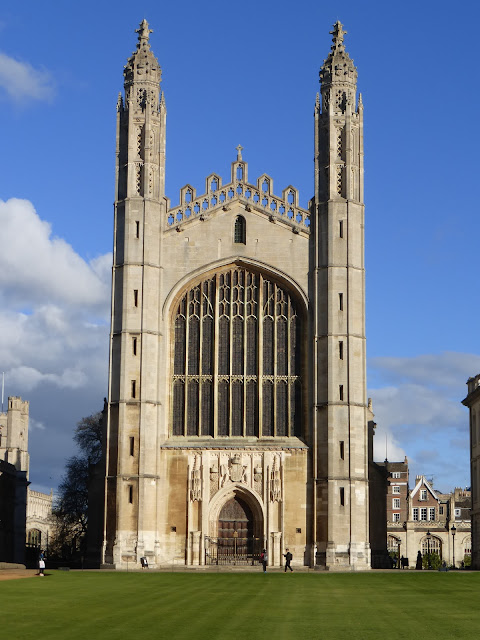 The west front is seriously disappointing. It looks squashed, much too narrow for its height. Compare it with the contemporaneous Bath Abbey, for example:


The aisles create a far more balanced and satisfying composition. Some readers will balk at this; is it fair to compare an abbey church (and one time cathedral) with a mere college chapel? They served different functions, so of course they'll look different. However, King's Chapel is so extravagantly ambitious that it must be judged by the standards to which it aspires. It's a large Gothic building, and it makes sense to compare it to other large Gothic buildings. (It's significantly longer than Bath Abbey - 289' as opposed to Bath's 225' - and only a little shorter than Rochester Cathedral (306').)

The other major problem with the west front (shared with that of Bath) is that the main feature, the large window, is standard Perpendicular and thus very dull. Perpendicular tracery provides an excellent framework for stained glass, but has few other merits. Endlessly repeated grid patterns are more anaesthetic than aesthetic. This problem is even more acute when the chapel is seen from the south (or north). 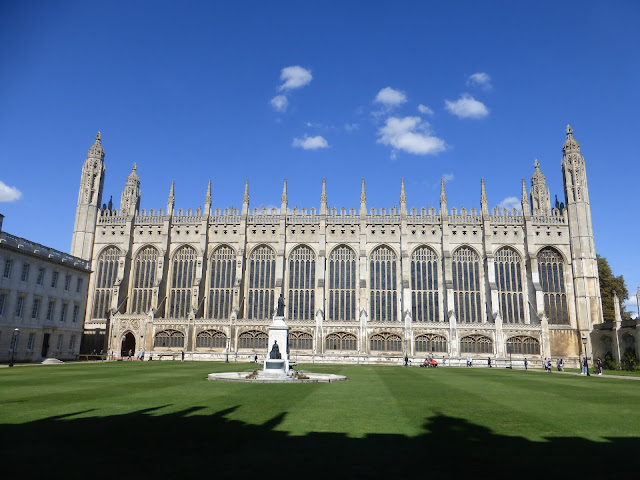 Tell you what, let's play a game of Spot the Difference with the windows; let's start with the one at the west and see how it differs from the one next to it. Take your time. What's that you say? You can't see any difference? Okay, move on to the next one. There's bound to be a difference there. No? Still no difference? How about the next? Or the next? Oh . . .

Twelve large identical (and nine identical small) windows, all equally regimented and uninteresting, do not constitute a satisfying facade. Apart from a door near the west end, too small to have much visual impact, there’s nothing on which to focus attention, no central feature to relieve the monotony. The scale is formidable, but this has been achieved by simply restating the same ideas (and they’re notably uninteresting ideas) over and over again. Repetition certainly has a role in architecture, but there comes a point when the eye cries out for variety. King’s Chapel goes well beyond this point, and the result is tedium. (King's is far from being the only building to suffer this defect, of course. It was endemic to the Perpendicular style - and by no means unknown in other styles of architecture, though at least other styles sometimes repeat beautiful motifs.)

The first time you enter the chapel you are likely to be awed. The fan vaulting, the stained glass and the sense of space are undeniably magnificent. Pevsner** uses the word ‘superb’ twice, once to describe the overall effect of the interior, once in relation to the stone carving. Who am I to disagree? And yet . . .

The essential thrill of large Gothic buildings is that vistas change as you walk around them. This is partly accidental, as most of them were built piecemeal over several centuries and comprise different sections that perhaps should clash but in practice nearly always complement each other. But mostly the varying views are a quite deliberate design feature. Stand at the west end and you're given hints of what you'll see later, but only hints. Walk down an aisle, and you snatch glimpses through the arcade. Arrive at the crossing, and a whole new aspect is revealed. Looking up and around, every step uncovers something fresh and surprising.

King's Chapel is a large rectangle, so very little of this applies to it. You walk in; you're awed. And - well, that's it, really. You're not going to be freshly awed by the architecture as you move around. You're unlikely to turn around and suddenly witness an unexpected visual effect. It's true that the nave has small side chapels, which give some sense of lateral space, and it is possible to go into them and see the main chapel from a different perspective, but they are very small and feel insignificant. It's also true that the large rectangle of the chapel is divided in two by the screen, which does break up the space to some extent (though the fan vaulting is one uninterrupted expanse from wherever it's viewed), but it remains essentially a single-celled building. Some exciting views can be had by standing near the screen and looking up. But nothing can disguise the fact that King's Chapel is basically a big box. It would make a fine airship hangar. 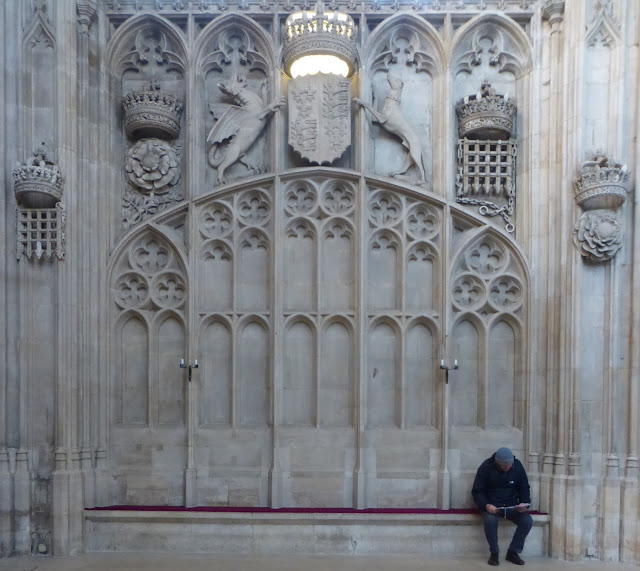 One of the most prominent features of the interior of the nave is the stone carving in each bay. Pevsner calls it 'altogether superb', and draws attention to the fact that each crown (top centre in the photo) is almost completely detached from the wall, which is indeed astonishingly skilful. (They now contain lights.) The photo above shows the westernmost bay on the north. The Perpendicular blank tracery is stately, and the crowns, portcullises (Tudor symbols),  Tudor roses, shield, greyhound (of Lady Margaret Beaufort, mother of Henry VII) and dragon (of the Tudor dynasty) constitute a lavish display. I'm trying hard, but I can't find anything to grumble about here.

It's time to play Spot the Difference again! 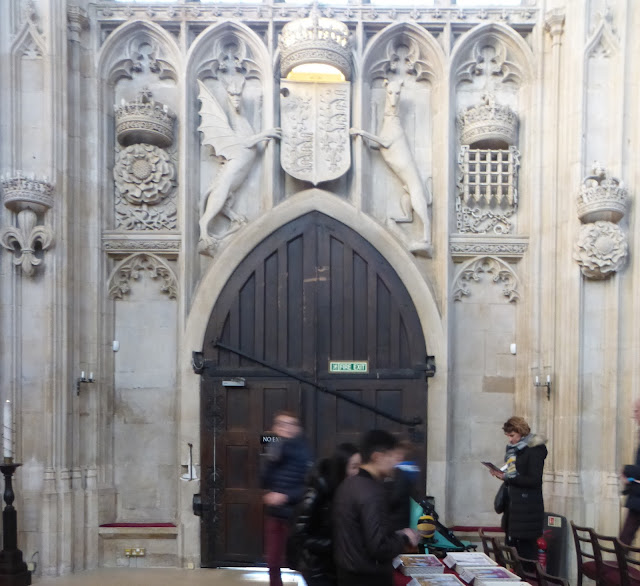 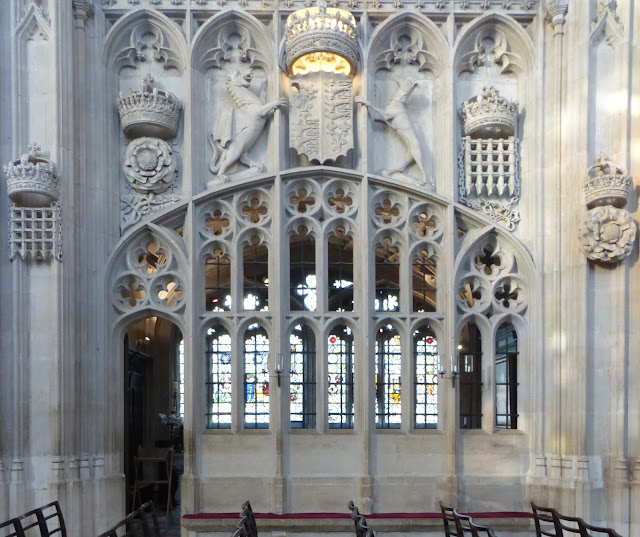 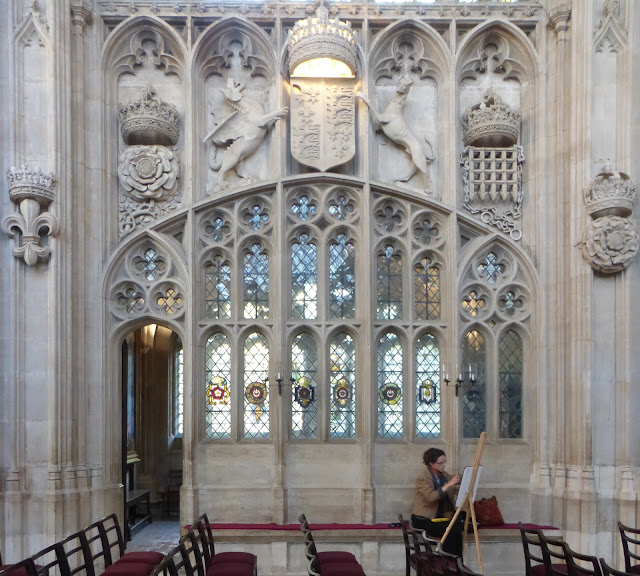 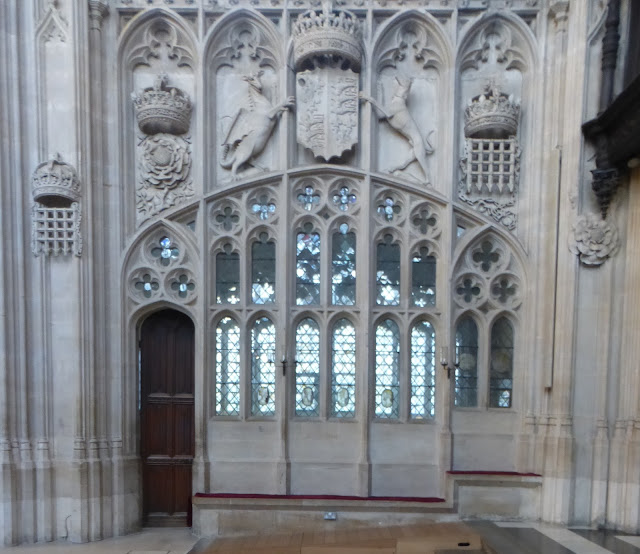 I'm not playing this game any more. I'm losing the will to live. You will too when I tell you that the bays on the south side exactly mirror those on the north, and that the sumptuous stalls beyond the screen to the east are heavily repetitious too.

King's College Chapel is in some ways magnificent, but also reveals the dead end that English ecclesiastical architecture had reached by the 16th century. Perpendicular had been the dominant (more or less the only) style for almost two centuries by the time the chapel was completed, and, rarely attractive at the best of times, it had thoroughly exhausted itself. Cue the Renaissance, and a flowering of church buildings in a new style . . . only that didn't really work out in England. It turned out that there wasn't all that much call for new church buildings, except in London, and that was only because most of the old ones burnt down. Oh well. At least we can console ourselves with the existence of earlier masterpieces such as Ely, Wells and York. 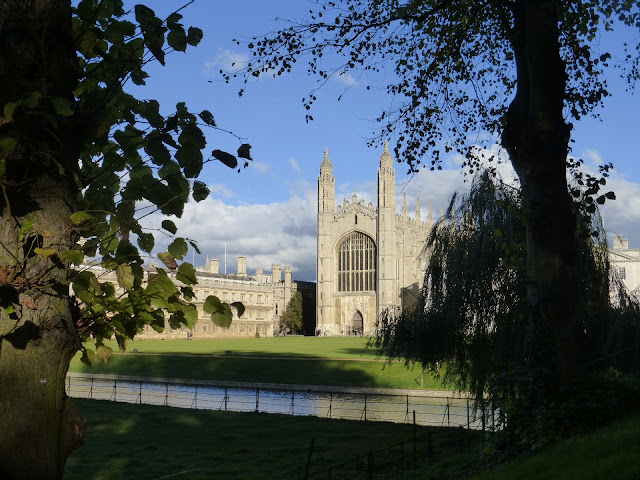 * So called because the backs of six of the colleges run along the River Cam.

** As usual, I’m using ‘Pevsner’ as a generic term to mean the authors of the Buildings of England series. Nikolaus Pevsner wrote most of the first editions, but the second and third editions have been revised, or, in the case of the more recent volumes, completely rewritten by a variety of authors. Simon Bradley is the main author of the third edition of Cambridgeshire; my apologies to him for attributing his words to someone else.

Posted by David Gouldstone at 19:33 No comments: