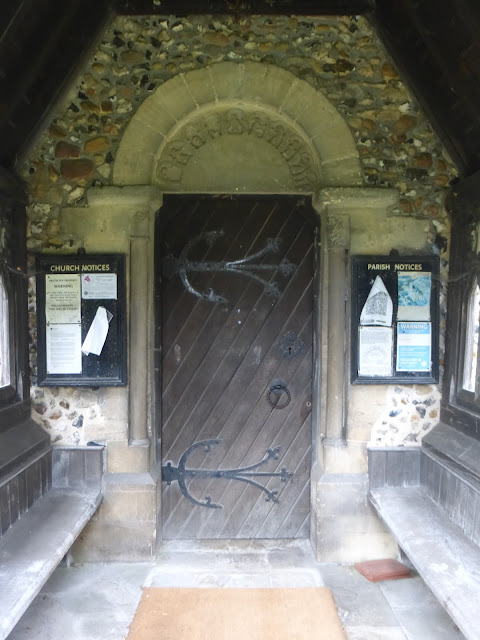 Returning to Cambridge from a crowded Saffron Walden yesterday (most places we tried for lunch we couldn't even get through the door, and the two places we did manage to enter were so busy that after some minutes of waiting we realised that there was little chance of being served, gave up and left), we stopped at two randomly chosen churches. Firstly Hadstock, Essex, (which was open) with substantial remains of a Saxon nave and transepts, and then Pampisford, Cambs, (which was locked, as I understand it generally is). 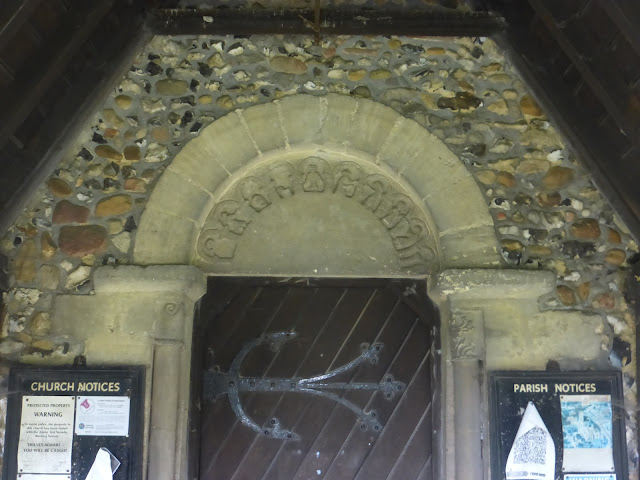 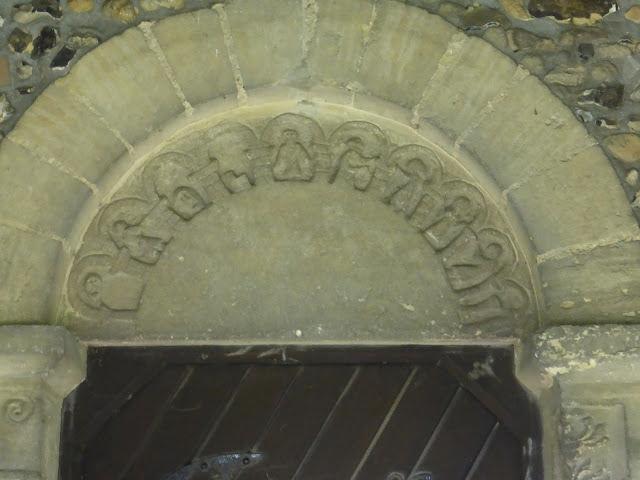 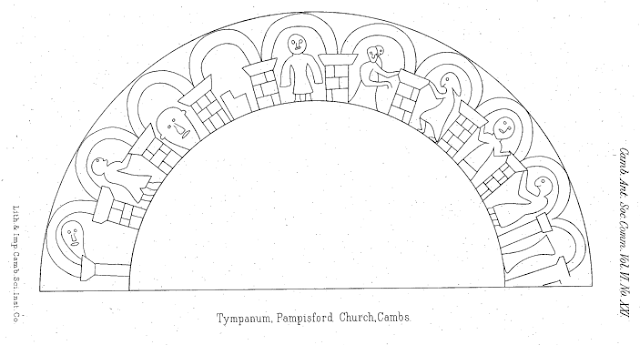 The main external attraction of the latter is the south door, and in particular its tympanum. This is round-headed, and contains ten smaller round-headed arches, so it's obviously Norman, and, like many Norman tympana, it's mysterious as its subject matter isn't entirely easy to ascertain. In 1888 G F Browne contributed an article to the Cambridge Antiquarian Society (from which the above diagram is taken) in which he attempted to identify the scenes, and, as the Corpus of Romanesque Sculpture in Britain and Ireland puts it, 'In the absence of anything better, or indeed anything else at all, Browne's interpretation must be accepted.'

Browne suggests that the the scenes have to be read from right to left, not left to right as might be expected; why this should be I can't explain. The story that emerges is that of John the Baptist (to whom the church is dedicated). 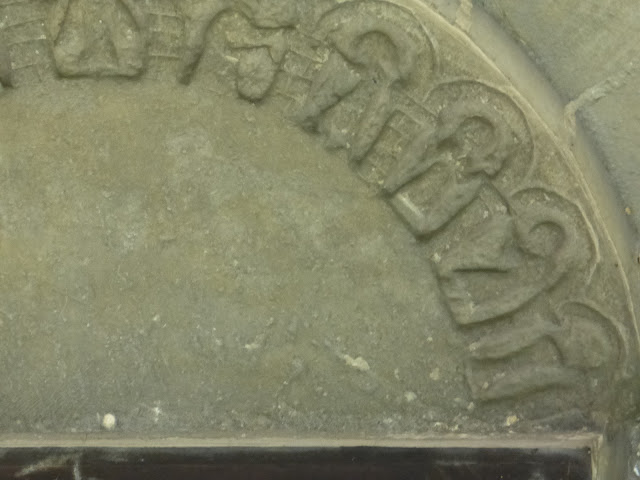 The first scene, on the far right, shows an upright cylindrical object, tapering in the middle like a talking drum, which is interpreted as being an altar on which Zechariah, John's father, burnt incense in the temple in Jerusalem. Zechariah's wife Elizabeth was beyond childbearing age so John's birth was deemed miraculous.
The second shows Zechariah gracefully bowing before the angel Gabriel, who appears in the third scene, arms raised in blessing.
Scene four depicts the daughter of Herodias, the wife of the Tetrarch Herod Antipas (extra-Biblical sources name the daughter as Salome) dancing to entertain her stepfather and his guests. She certainly seems to be giving it her best shot, her long hair apparently swinging free and with abandon. 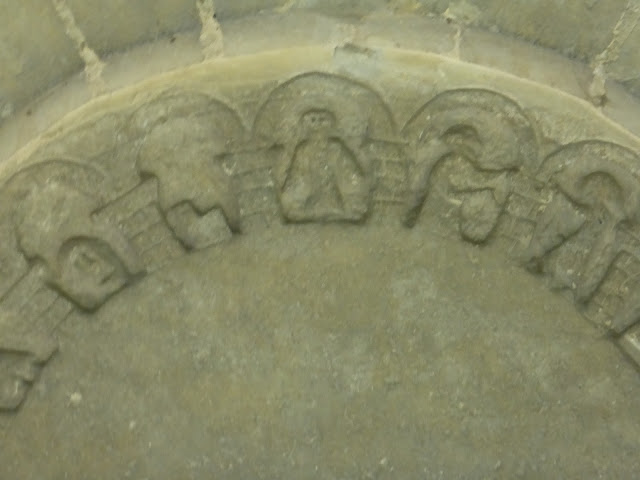 The fifth panel shows Herod and his guests watching the dance. The guests are very hard to make out. Browne's drawing makes it look as if Herod is looking out of the picture at us, the viewers, but to me it seems as if he's staring to our right, straight at Salome. He is certainly stretching his arm out in her direction, though whether he's pointing at her or showing his attraction to her by wanting to touch her is unclear.
Herod wants to reward her, and says she can have anything she wants. She consults her mother, who tells her to ask for the head of John the Baptist, who is shown in the central, sixth scene. The next depicts the executioner's block. 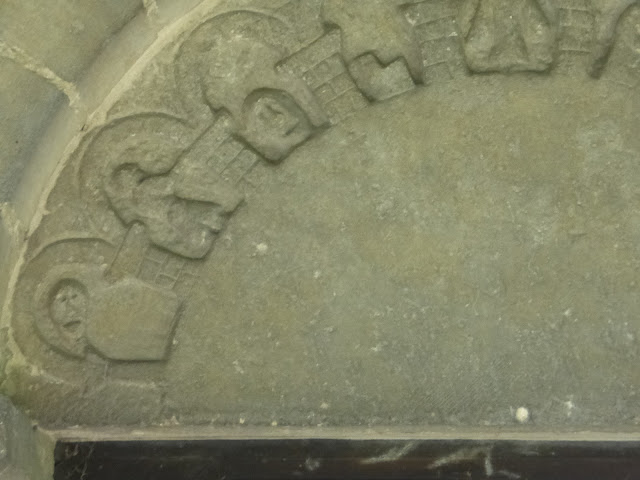 Scene eight shows John's severed head (completely out of scale with the other pictures). The penultimate scene is a servant with arms extended as if carrying something, but we don't see what; presumably it is the platter with the head. Why the sculptor omitted this crucial detail I don't know.
The last panel shows the head once more, smaller than in scene eight but a little bigger than the heads in the other scenes. Curiously, it is now no longer vertical but tipped almost over onto its side and is floating like a helium-filled party balloon near the top of the arch. Presumably this is intended to represent Resurrection.
All the carving is very crude; it looks as if it was made by someone with only the most basic artistic skills. Even the two depictions of the head, where you might think the sculptor would have had a bit of room to add some detail, make do with two more or less round holes for the eyes and a simple slit for the mouth, with just a faint suggestion of a nose. Of course it's possible that some detail has been lost in the centuries since it was carved.
How old is it? The CRSBI makes no attempt at all to date it. Pevsner merely notes that it's 'like the decoration on some 12th century fonts.' The Statutory Listing concurs. The Victoria County History refines this to mid 12th century. Browne tries to make a case for its being soon after 1204, when the alleged head of the Baptist was brought from Constantinople to Amiens, on the grounds that at the time the manor of Pampisford was held by Peter of Dreux, which isn't far from Amiens. This is ingenious and almost plausible, but given the primitive nature of the carving hard to accept. I'd be happier with an early 12th century date (which Browne himself admits is a possibility).
Another puzzle is why only the top outside edge of the tympanum is carved; why is the bulk of it left blank? Surely artistically it needs big central feature; John baptising Jesus, for example. Maybe this would have been too expensive, or beyond the mason's expertise. 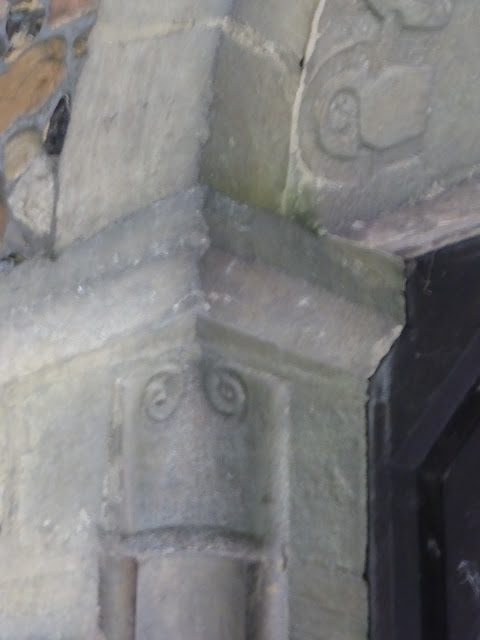 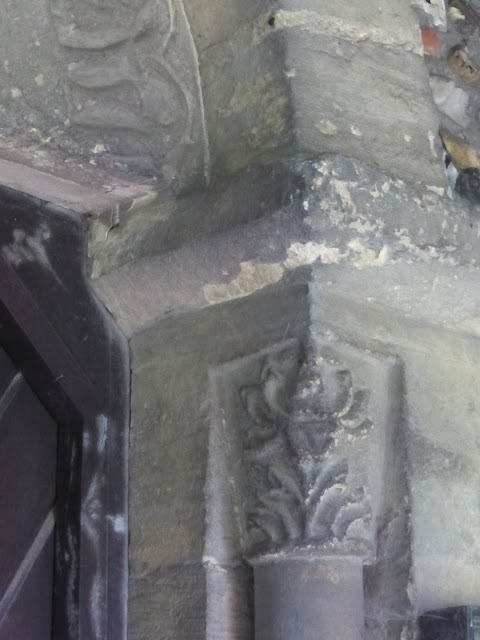 The capitals on either side of the door are equally primitive, and presumably of the same date. The one on the left is very like those at Reed, Herts, a very simple volute scroll, while that on the right has a stylised plant. 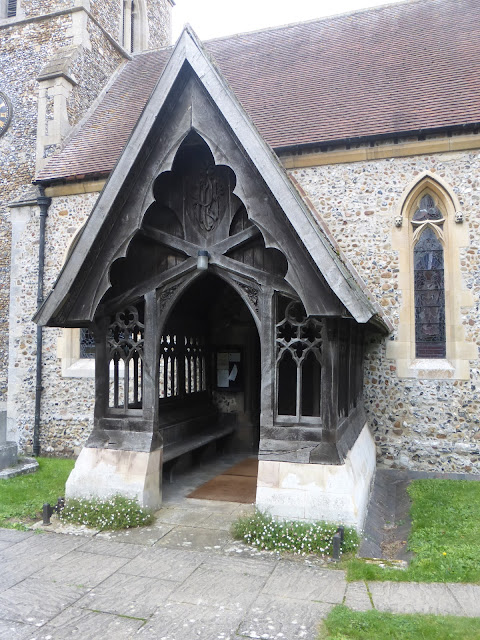 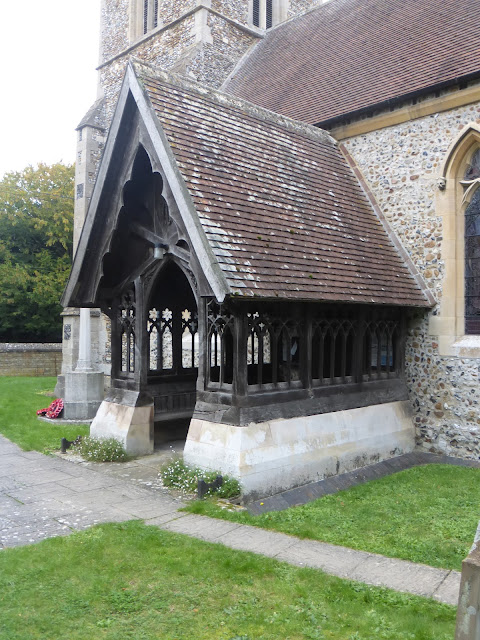 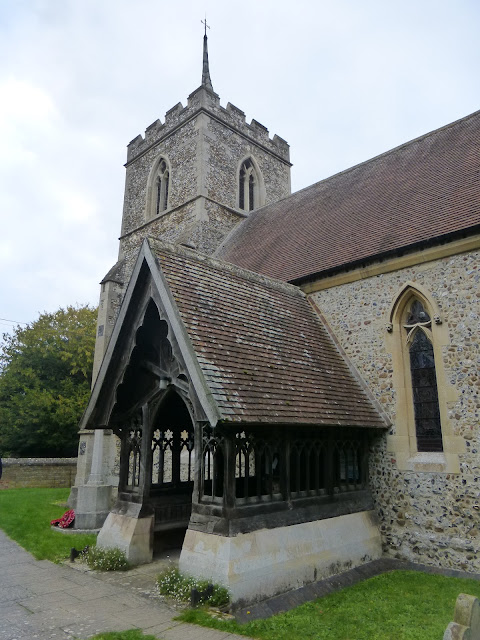 Altogether the carving is in a reasonable state of preservation, surprisingly so as it seems to have been exposed to the elements until 1855 when P C Hardwick restored the nave and built a porch, which shelters the tympanum. This is a delight, confident with much Gothic wooden tracery and an assertive steeply-pitched roof. 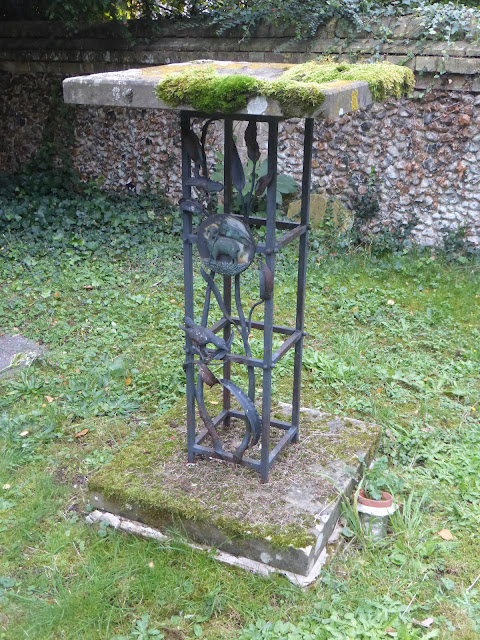 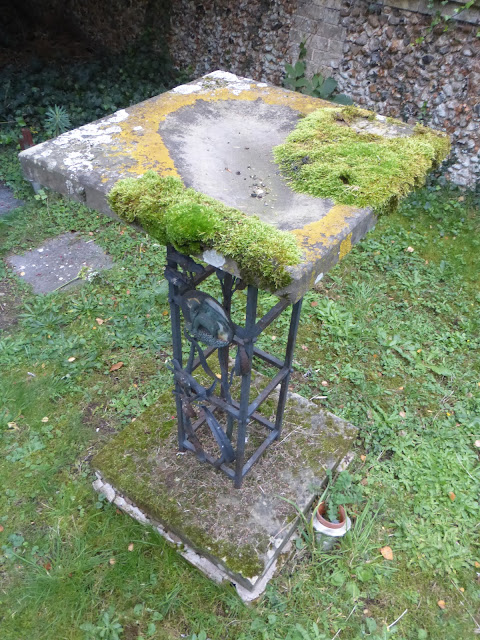 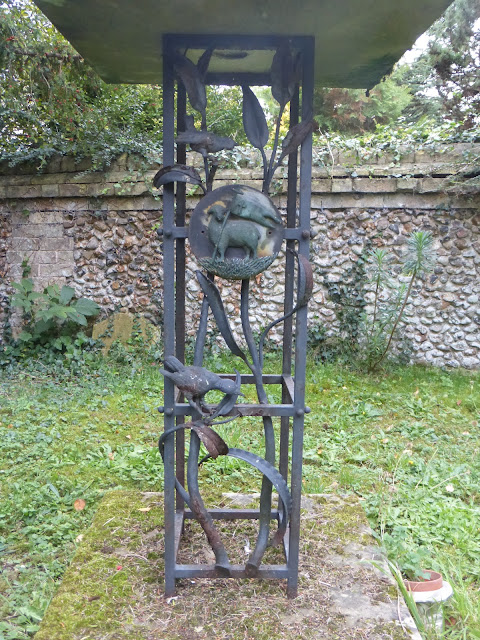 Opposite the porch is another curiosity: a memorial comprising a flat stone square, now agreeably mossy, on an openwork iron plinth, like an Art Nouveau bird table. There may be an inscription, but it's hard to read under the vegetation.
Pampisford is worth a visit, locked or not.

Posted by David Gouldstone at 22:05