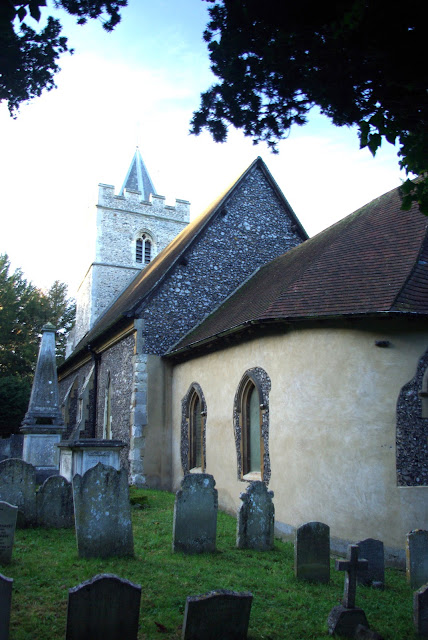 The chief charm of Great Amwell church* is its location. It sits on a tree-thronged hill above the New River, an artificial waterway and a remarkable feat of engineering which supplied water to Islington, London, from 1613. Originally all the water came from springs, but from 1620 the River Lea has contributed too. Even today about 8% of the capital's water originates from these sources. 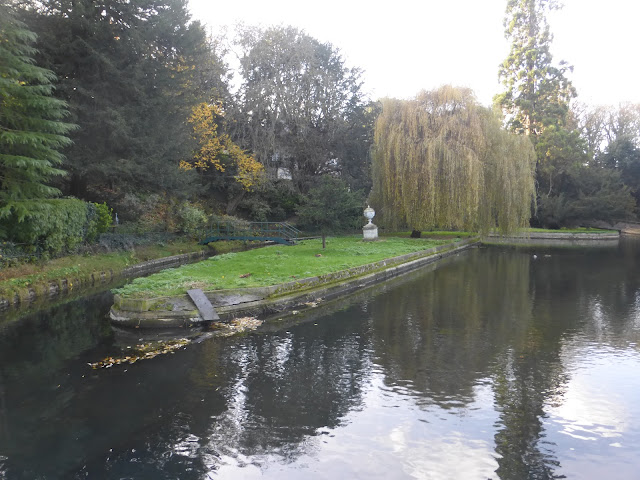 The project was initiated by Edmund Colthurst (c.1545-1616), whose other main claim to posterity's attention is that he inherited a largely roofless Bath Abbey but donated it to the city in 1572. However, he dug only two miles of the watercourse before running out of money in 1604, and Sir Hugh Myddleton (1560-1631) took over the reins. He wasn't without financial troubles of his own and had to be backed by James I and by the sale of what we'd call today shares (one of the first times finance was raised by this method), but he succeeded in completing the project in 1613.
Nearly two hundred years later, in 1800, the architect Robert Mylne (1733-1811), who had been the Surveyor to the New River Company since 1767, erected a Coade stone monument to Myddleton on an islet, creating an eminently picturesque scene which combines nature and artifice somewhat in the manner of Humphry Repton. 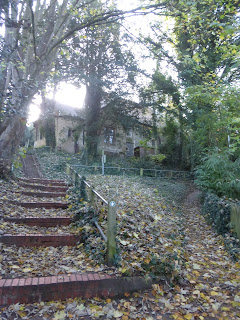 Stairs cut into the hill above the waterway climb up to the church, which has early Norman origins and is one of only three in the county with an apse.** 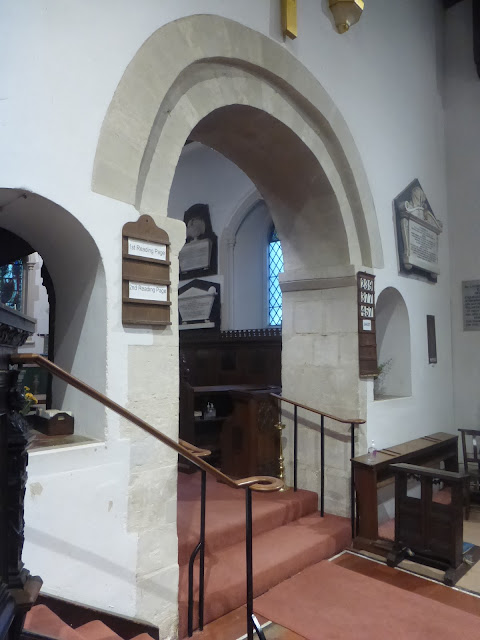 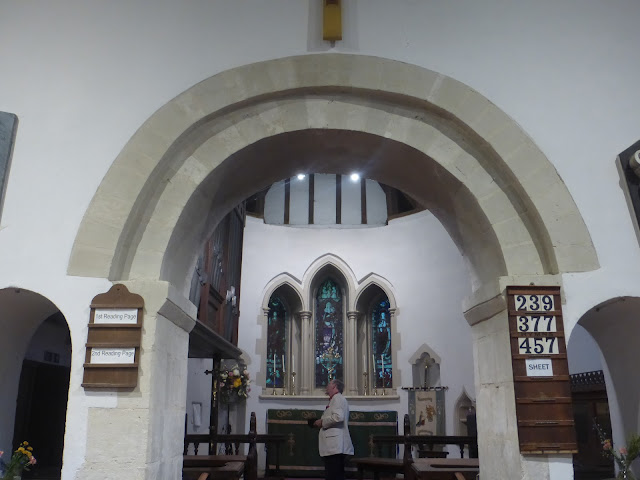 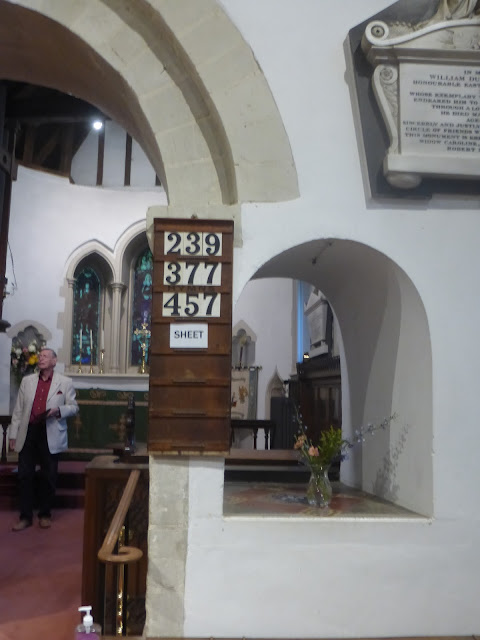 The chancel arch, which like the rest of the main structure (apart from the tower) dates from about 30 years after the Conquest, is stark, even crude. The two flanking squints (intended to allow a view of the altar from the sides of the nave) are unusually large and probably a little later. One window, on the north of the chancel, is substantially of a similar date, but all the other windows have been renewed in the 19th century, the east window as an Early English 13th century-style triplet of stepped lancets. 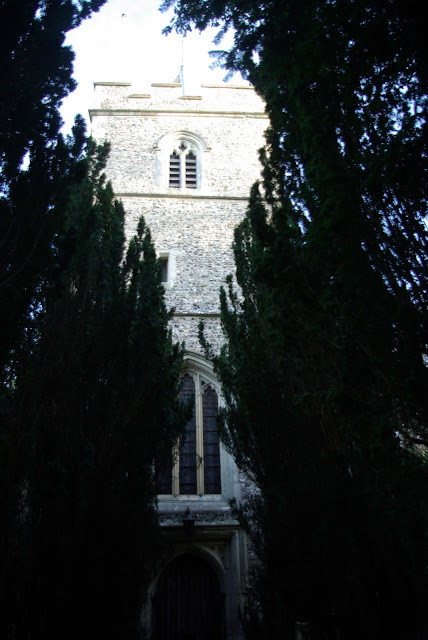 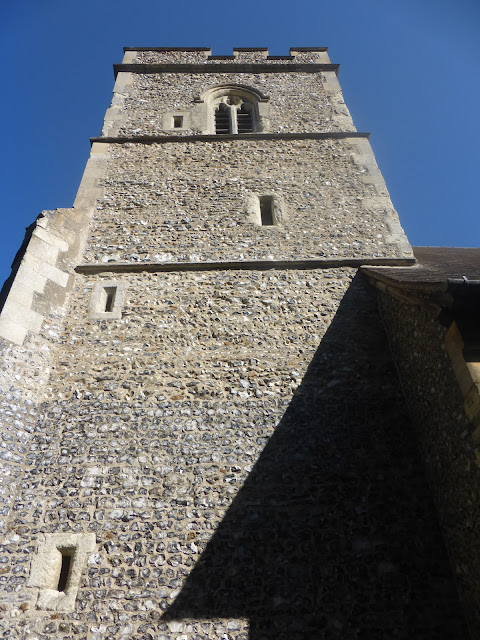 The tower is 15th century, as are some timbers in the roof of the apse, but otherwise the church has been over-restored and stripped of much of its antiquity and interest. Of the furnishings the most interesting is the pulpit. 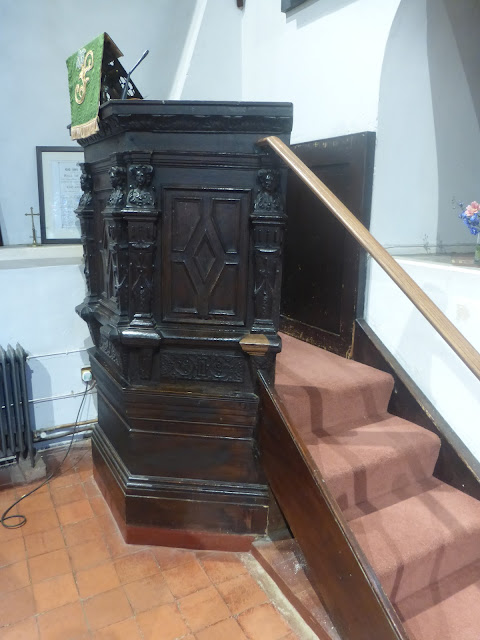 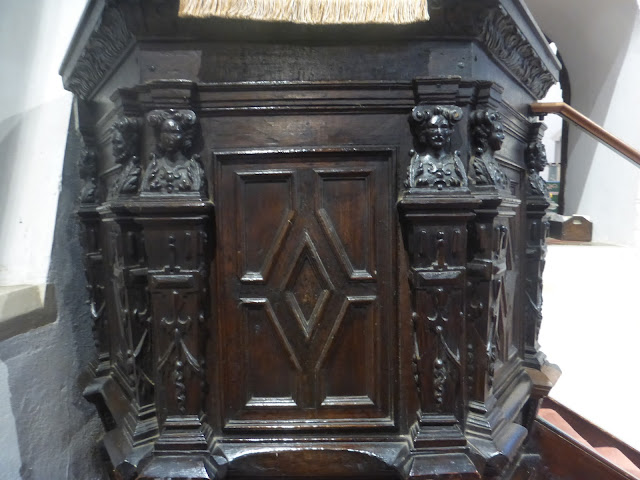 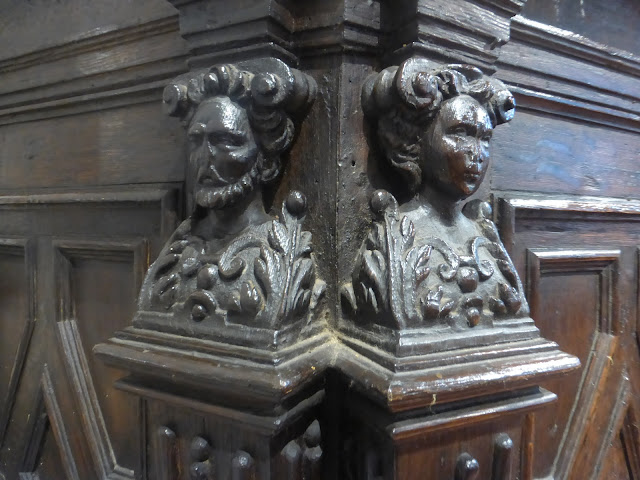 This was brought from the Archbishop of Canterbury's Croydon Palace c.1800 (allegedly by Robert Mylne), and, it is said, was originally a three-decker which was cut down in the 1866 restoration. It is dated 1696 but the wood on which this is carved must be an insertion from another piece of furniture. The style of the pulpit seems to date it from about 50 years previously, ie mid 17th century (according to Bettley/Pevsner), from the Jacobean period (1603-25) (Statutory Listing), from 'earlier in the century' (Victoria County History), or from the early 17th century (Royal Commission on Historical Monuments). Whenever they were carved, the imperious caryatid heads are a delight with their hairstyles morphing into Ionic volutes. 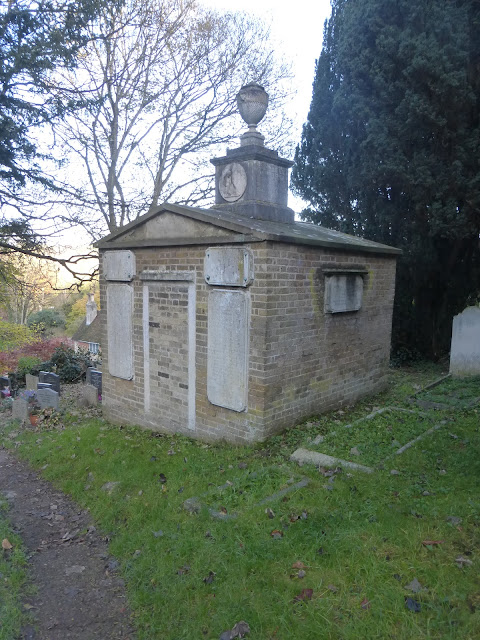 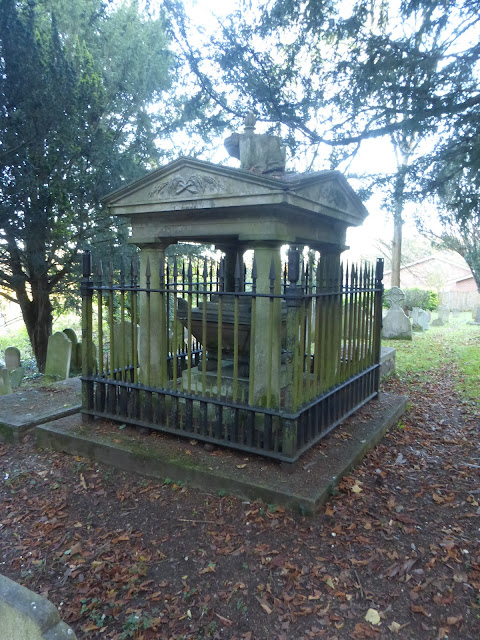 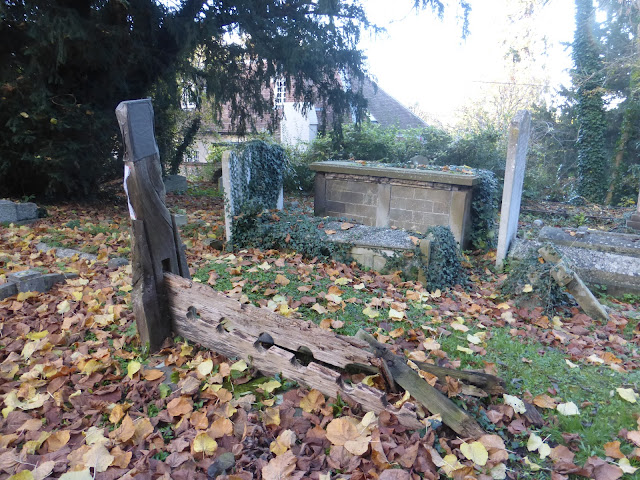 The disappointing church interior is partly compensated for by an unusually eventful churchyard. The most striking perhaps is the Milne family mausoleum, built by Robert himself in 1800, minimally classical in style in white (ie pale) brick, with a stumpy tower on which is perched a Coade stone urn similar to the one by the New River below. Much more determinedly classical is the Cathrow monument, commemorating George (d.1842) and Elizabeth (d.1820) Cathrow. There are also some rapidly crumbling stocks, *** probably not in situ and even more probably not long for this world.
Great Amwell church is usually locked, and hard to get into.
* On the day I was there the person acting as a guide mentioned the idea that churches dedicated to St John the Baptist (as Great Amwell is) are often accessed by steps leading down, to symbolise stepping into the River Jordan. This is an idea I regard with a degree of scepticism.
** Bengeo and Great Wymondeley are the others, though no doubt once there were many more, for example at Weston.
*** There are also stocks at Brent Pelham. 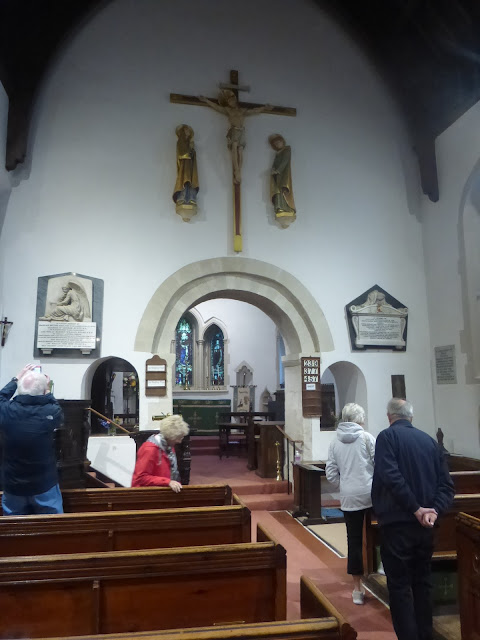 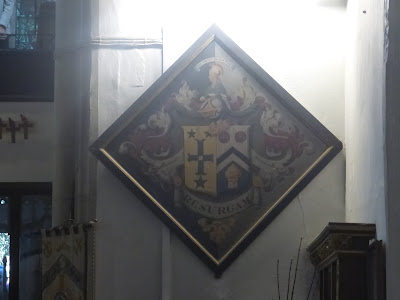 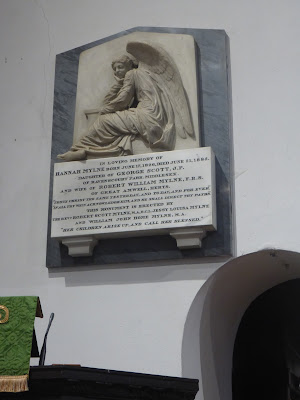 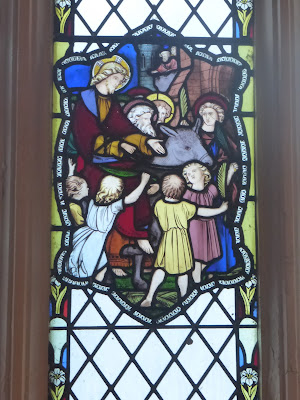 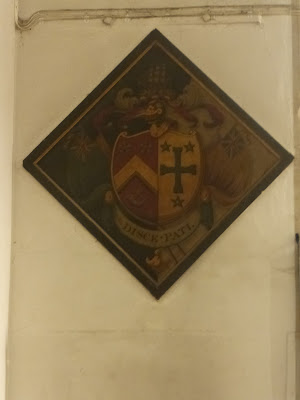 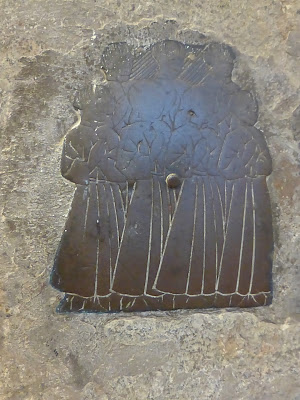 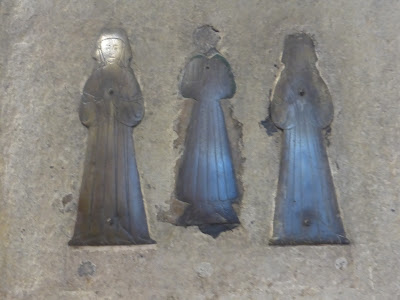 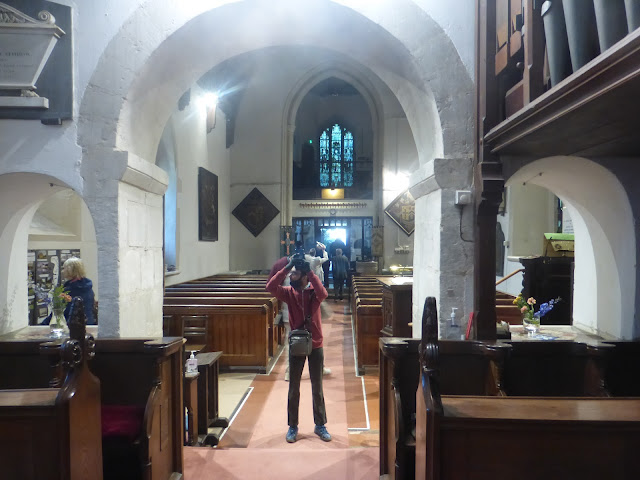 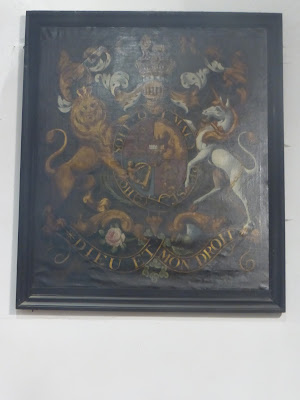 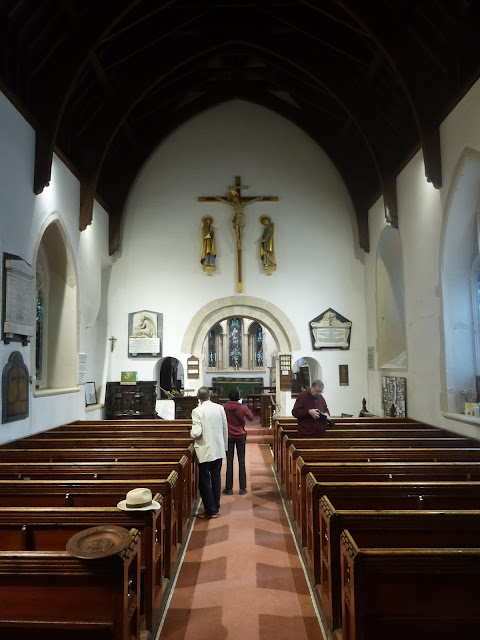 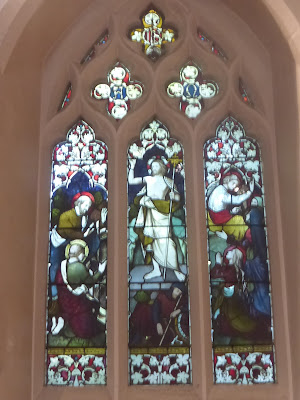 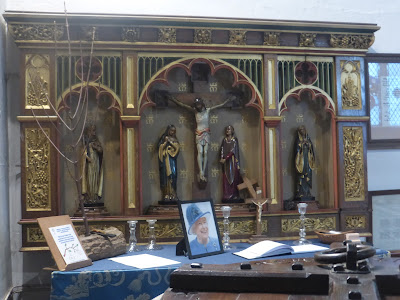 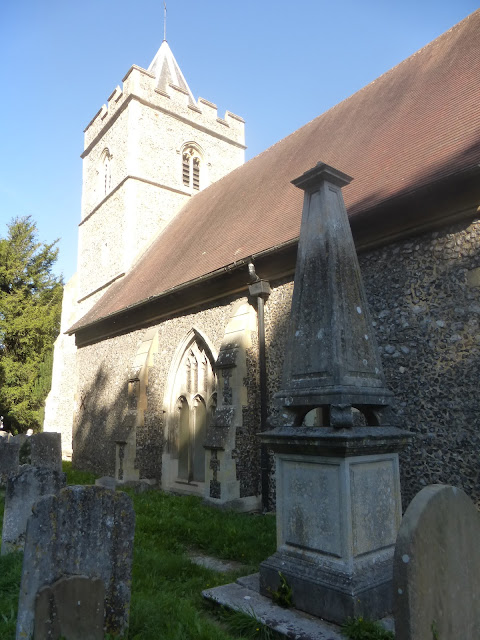 Posted by David Gouldstone at 14:51