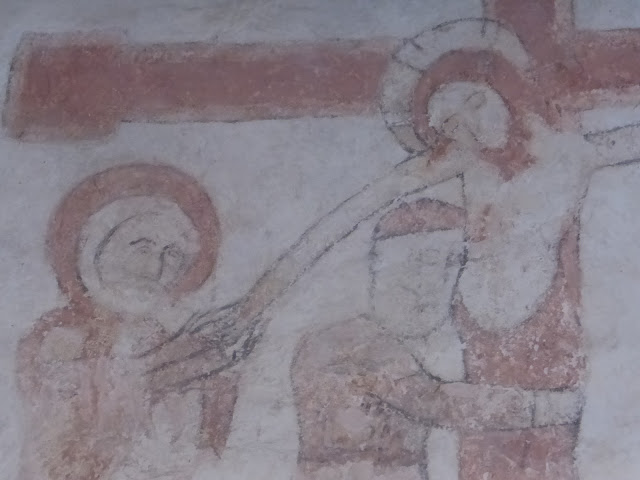 Bengeo is the home of the most affecting medieval mural in a parish church in Hertfordshire.* It depicts the Deposition from the Cross, dates from the 13th century and is positioned on the east wall of the nave so as to be most visible to the congregation. (It was discovered under layers of paint and plaster as recently as 1938.) Joseph of Arimathea, wearing a kippah, and with apparently downcast eyes, lifts down the limp and lifeless body of Christ; he stands on a little hillock, representing Golgotha. Mary tenderly grasps her son's wrecked right hand with both of hers. She looks stunned into disbelieving, catatonic silence. 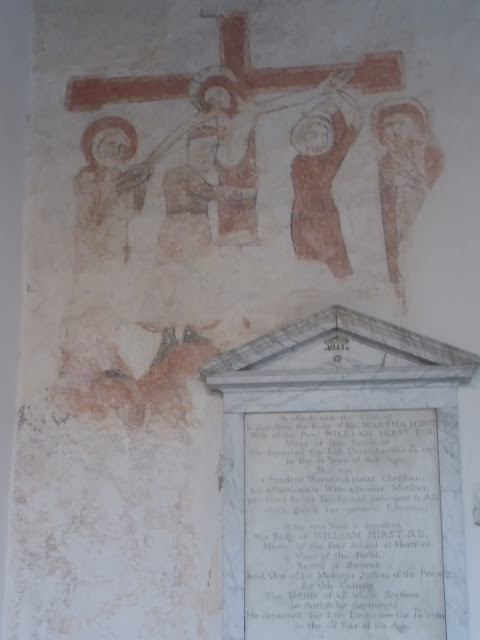 On the right a young figure, probably St John, is using a pair of pliers to extract the nail from Christ's left palm. He isn't looking at what he's doing, maybe too overcome to do so. Instead he looks over his shoulder at another haloed figure, probably Nicodemus (who according to John's Gospel had visited Christ by night to receive teaching). (Strangely, he seems to have two left hands. It's not uncommon in medieval paintings for figures to appear more than once in order to tell a story, and perhaps something similar was intended here.)
It's all faded and faint, yet the rawness of the emotion is fresh. Nothing is overstated; the artist deemed it sufficient to simply lay the events before us; he was right. 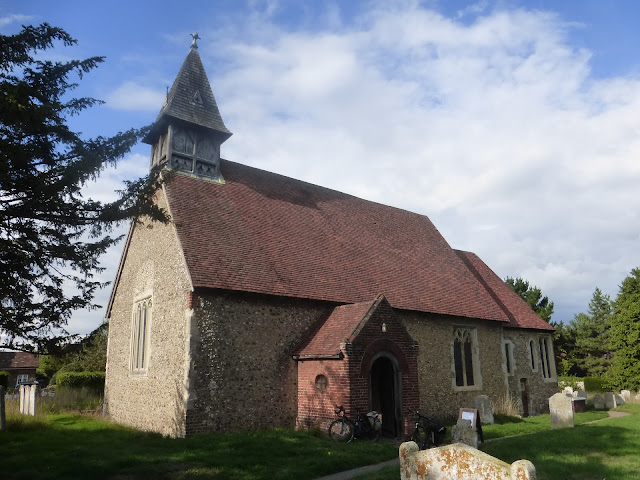 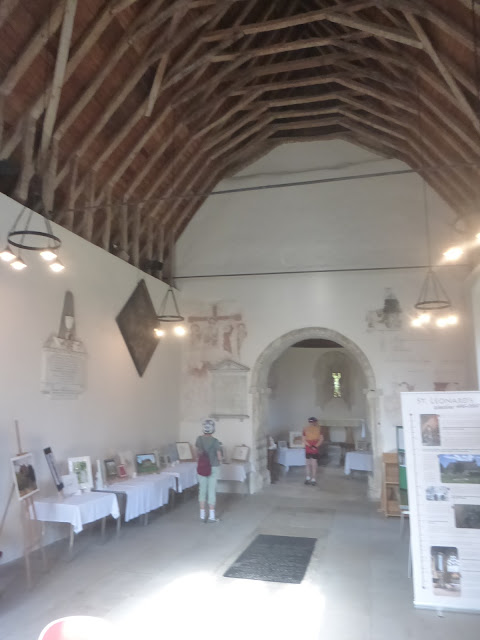 The small and humble but mightily atmospheric church itself dates from a century or so earlier than the mural, that is the 12th century** (probably early in that period judging by the simplicity of the architecture), and has remained structurally much the same since. Nine hundred years ago this is what many village churches would have looked like; most of them have since been altered out of all recognition, but Bengeo has been preserved. There are no pews; old pictures show that there were once box pews installed in the 17th or 18th centuries, but these were all removed when the church was closed after the opening of nearby Holy Trinity in the 1850s. The subject of seating in churches in the Middle Ages, and especially in the earlier centuries of that period, is a disputed one, but probably there were few or no seats here in the 12th century either, so the lack of pews is authentic. There are folding chairs, but when they're stacked against the west wall the nave and chancel are surprisingly, soothingly spacious and light. 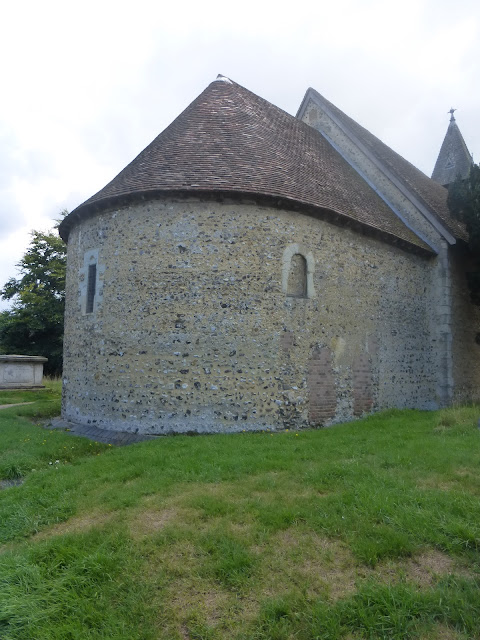 It has one of only three apses in the county***; the diminutive size of the original windows is one of the things that marks the church out as being older than most. 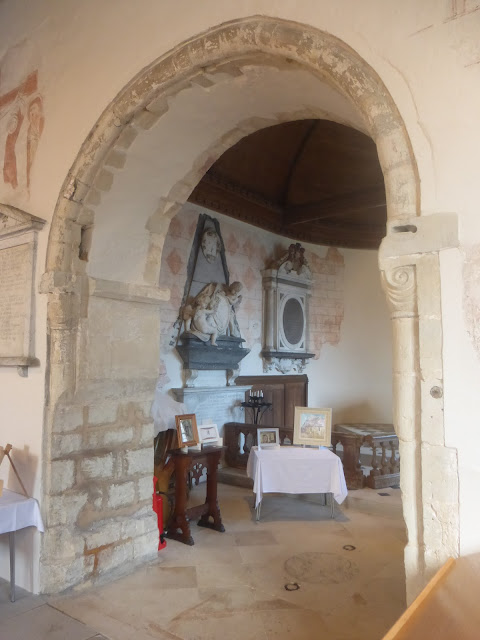 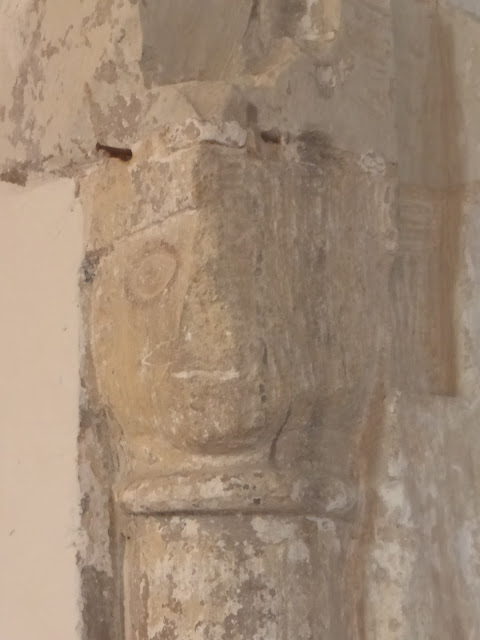 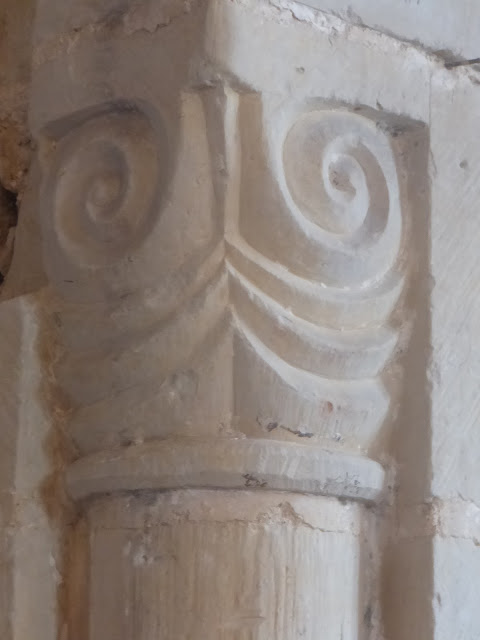 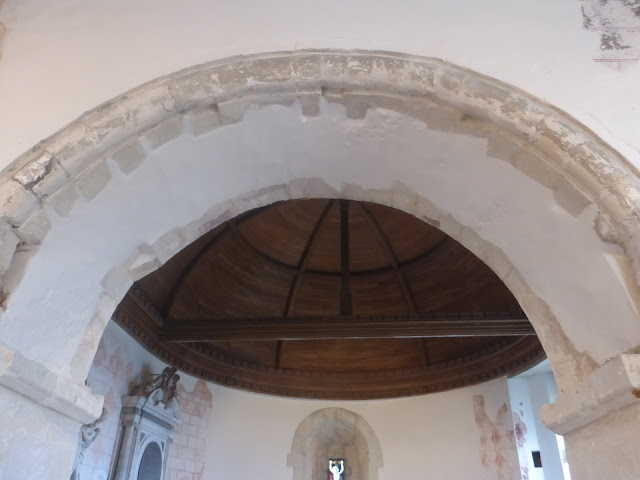 The chancel arch has, on the south, a capital that's either an abstract design or foliage so stylised that it is all but abstract, and on the north a very crude head of a man, like a child's drawing. 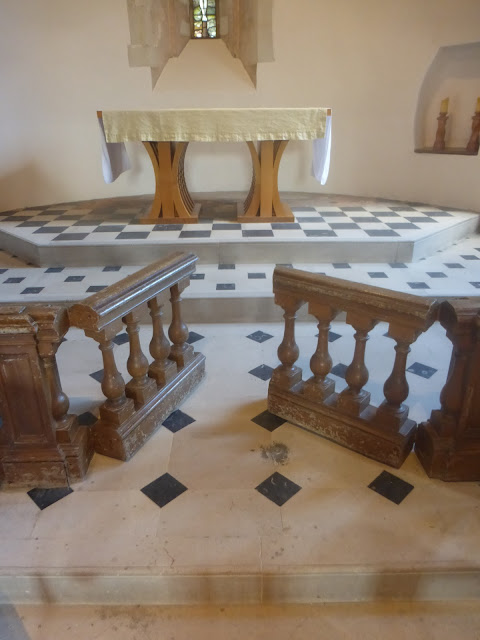 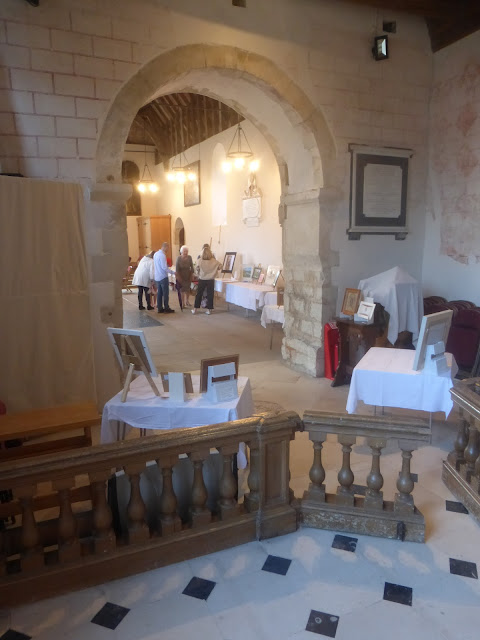 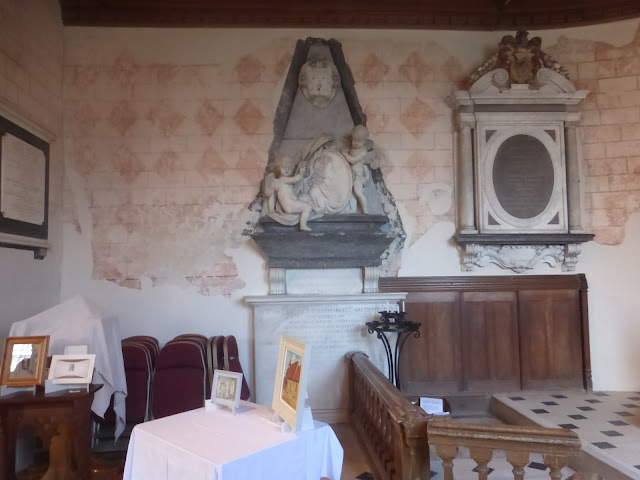 The chancel north wall has the extensive remains of a fictive masonry painted scheme. (The interior of walls, which were often made of uncoursed rubble, flints, etc, were generally plastered and then painted to look like neat courses of stone.) Red lozenges were later overpainted. All this could be of about the same date as the Crucifixion. The chancel rails are 17th century. 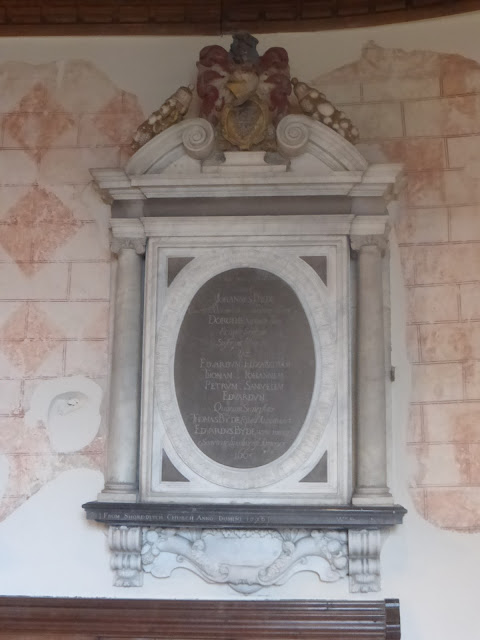 There are two notable monuments, the first to John Byde, d.1665, coolly classical except for the decorations around the small cartouche at the bottom. It is by William Stanton (1639-1705), very different to his almost-masterpiece in Flamstead. 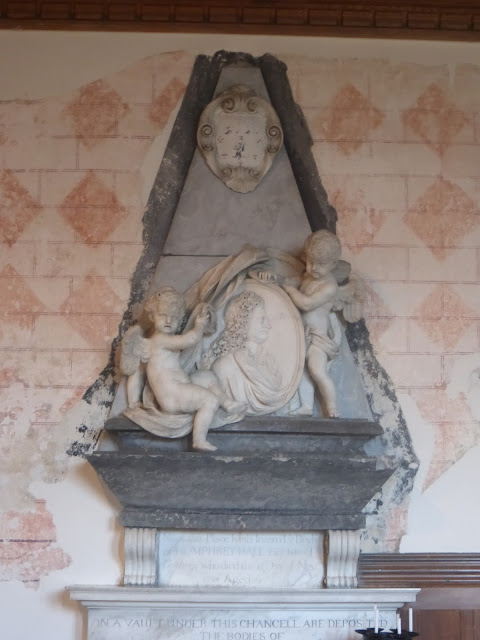 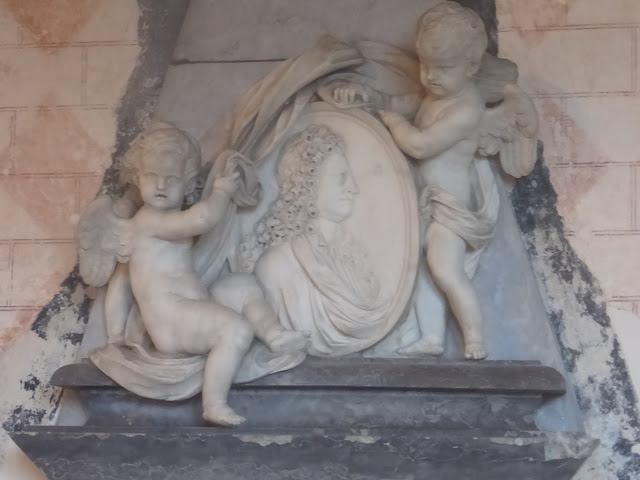 The other, grander and more elaborate, has two putti (the one on the left looking somewhat truculent) attending a portrait medallion of a man in profile wearing a resplendently curly wig. It commemorates Humphrey Hall (d.1695) of Goldings, Waterford, and is by Thomas Adey (or Adye, or Ady) (fl.1730-53), who specialised in monuments of this type. For example, there's another one by him in Icknield country in Fowlmere, Cambs (see the photo here). 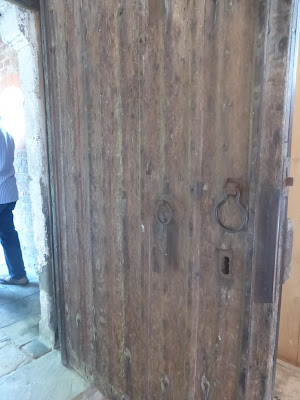 The south door, together with its iron fittings, is 14th century; (bizarrely, the otherwise reliable church guidebook claims that 'it has been suggested that this is the oldest hanging door in the country.' Looking no further than the county, let alone the country, I think the inhabitants of Little Hormead would have something to say about that, with their wonderful 12th century church door (admittedly not currently hanging as it's under longterm restoration)). 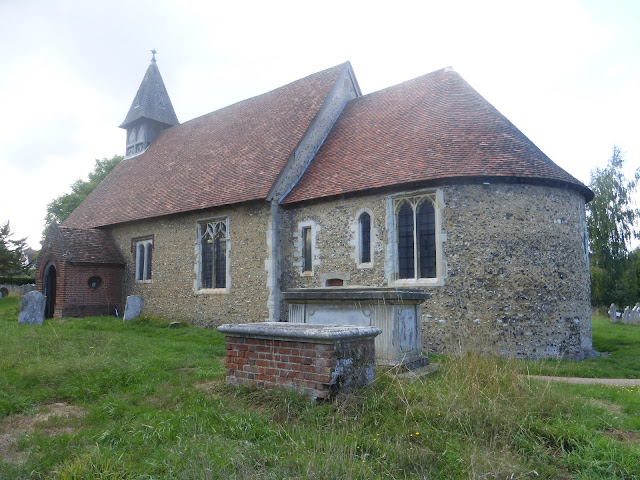 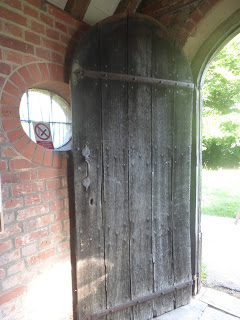 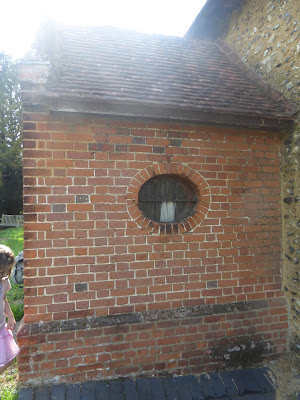 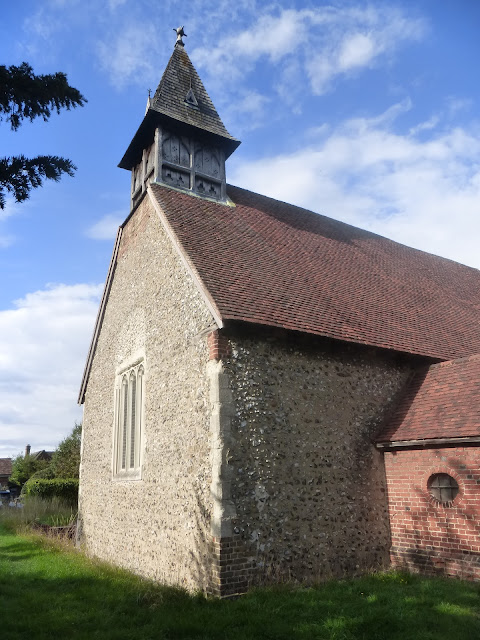 In the 14th and 15th centuries new, bigger windows were made in the south and west walls to bring more light into the interior (presumably obliterating some original Norman windows in the process). The brick porch, with its attractive oval windows, was added in the 18th century, and the bellcote in the 19th.
As already implied, the church was more or less abandoned and left to decay when the new parish church was opened in the 1850s. Very fortunately, before the dereliction had gone too far the decision was taken to conserve it, and a restoration began in 1879. In recent years a small kitchen and toilet have been unobtrusively added to the north side, ensuring that the building can meet modern requirements and continue to be used for services, concerts, etc, as well as, of course, be occasionally available to delight church crawlers. Long may it last.
St Leonard's, Bengeo (not to be confused with the Victorian Holy Trinity) is open on summer Sunday afternoons from 2.30 to 5. See their website. I can recommend their tea and cake. The guidebook, by Cliff Greely, is well above average too.
* Admittedly not a very high bar to reach in a county not overblessed with high quality wall paintings. The best ones are in St Albans Abbey/Cathedral.
** The church guidebook states that some features, for example the south doorway, are Saxon (ie 11th century or even earlier), but I've not seen this suggested by any other source.
*** Great Amwell and Great Wymondeley are the others. 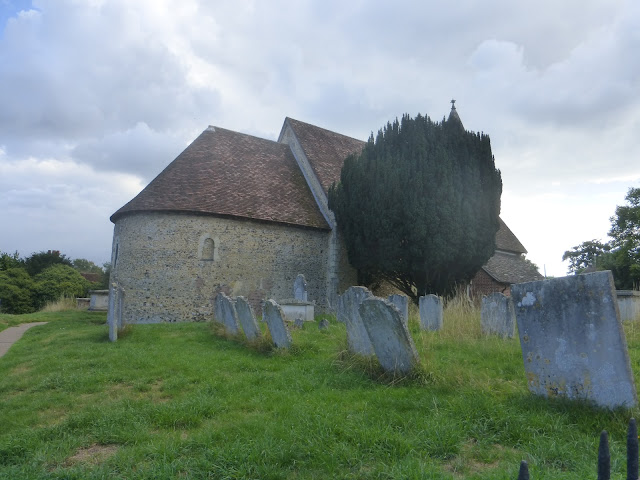 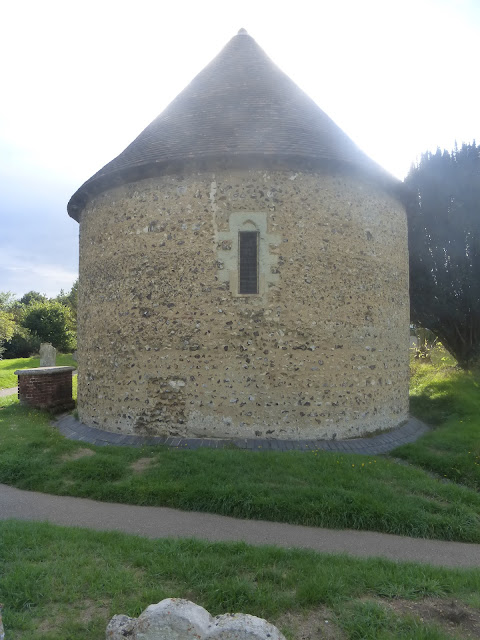 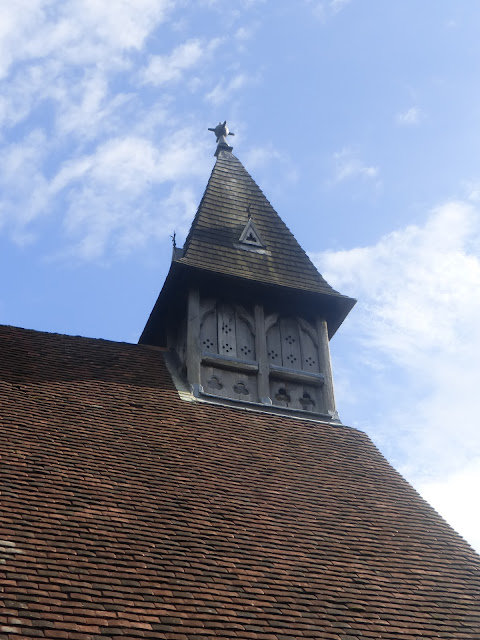 Posted by David Gouldstone at 11:41