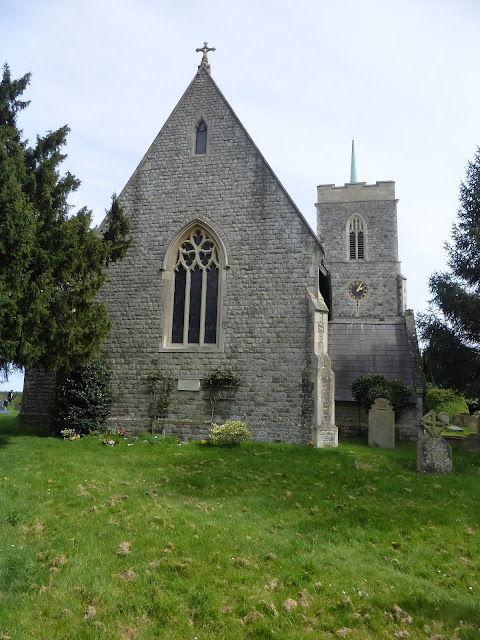 High Cross, a few miles north of Ware, stands on Ermine Street, the old road from London to Lincoln and York. The church was, like many of the period (for example, Apsley), built at the instigation of, and largely paid for by, a local philanthropist, in this case Lady Louisa Giles-Puller (d.1857) and her son Christopher Puller. It was designed by Anthony Salvin (1799-1881) in 1845-6, his only one in the county (though he restored Hemel Hempstead); the tower was added by Charles Ford Whitcomb (1872-1930) in 1906. 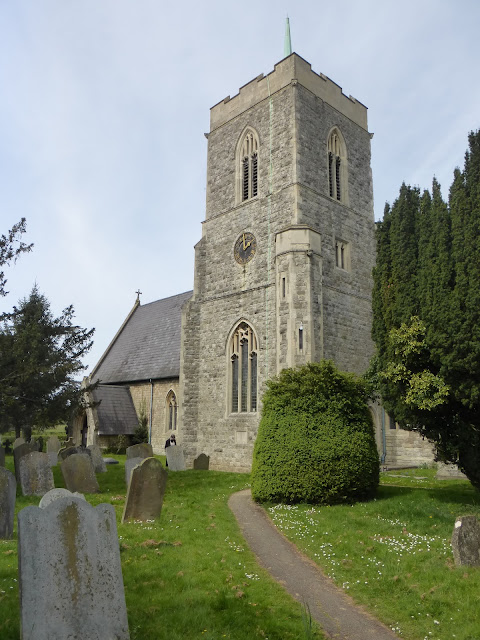 Salvin and Whitcombe both chose Kentish ragstone (except for the dressings), probably because it was relatively cheap; they were criticised at the time for this, and I think rightly. The nature of the stone means that it has to be cut into small chunks, not much bigger than bricks, if it is to be used in evenly-sized blocks, which in turn means that the surfaces are not as smooth, dignified and restful as walls of freestone. They are disturbingly busy, as if they're made of monochrome lego.* 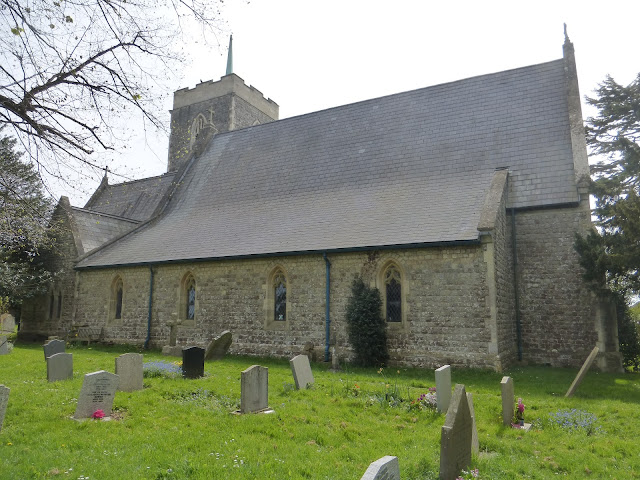 Salvin used the Decorated style of the earlier 14th century, but the exterior, even allowing for the ragstone, has little to get the pulse racing. The placing of the tower on the south of the chancel (as in nearby Standon) is eye-catching (was this always part of Salvin's plan?), and the view from the north, with the very steep pitch of the nave becoming less acute as it covers the aisle, is quite striking. 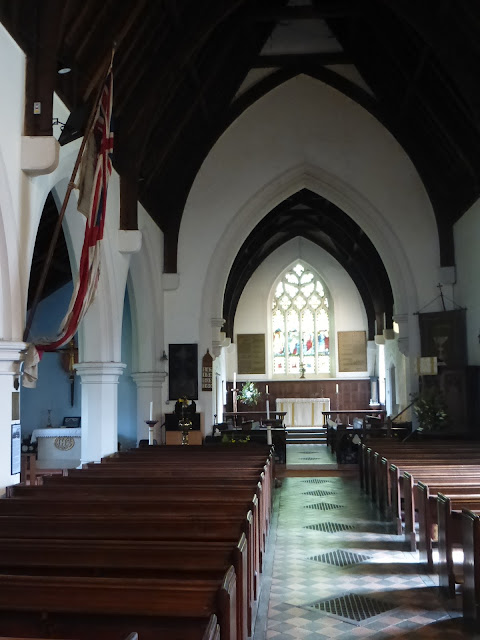 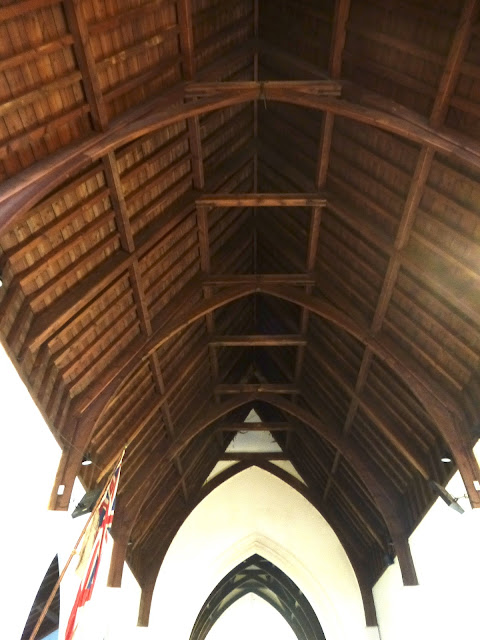 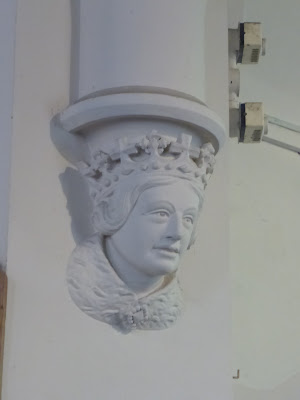 The sober interior is more imposing, mostly thanks to the height of the nave with its arch-braced roof. There's little in the way of architectural decoration; the chancel arch's north corbel, presumably depicting a young Queen Victoria, is an exception.

There are two main reasons for visiting High Cross: the stained glass, which I assume nearly everyone reading this blog will be interested in, and the church's connections with military history, which the average aficionado of churches might be indifferent to. 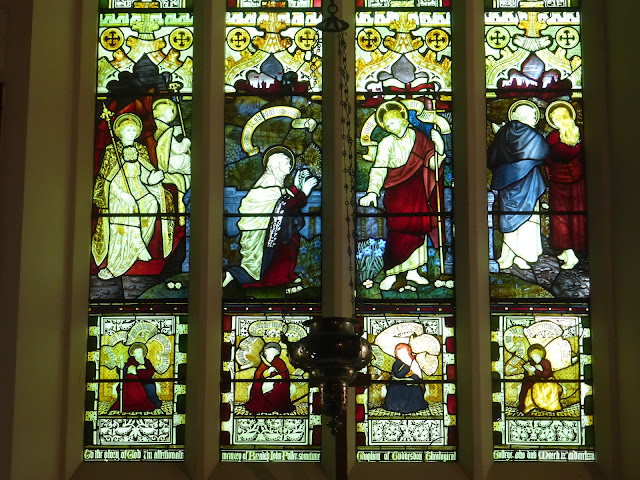 The east window is by Charles Eamer Kempe (1837-1907). I've been known to be rude about Kempe before (see here, for example); this is partly because some of his windows (especially later in his career) are pretty bad, but also because he was prolific and sometimes it seems that it was compulsory to have one of his bloody windows in every church in the land, and because he has had more critical attention paid to him than any other Victorian glass designer (except Morris and Co) - there are at least two books about him, and yet still not a single one about the far superior Clayton and Bell, for example - and he always gets named in church guidebooks when other designers are overlooked - none of which is his fault. But I have to admit that he did have some merit. This window is an example, a fairly early work from 1876; it shows the Noli Me Tangere; the figures are affected and theatrical, and the colours gloomy, but I like the small lights at the top and the four small panels at the bottom. 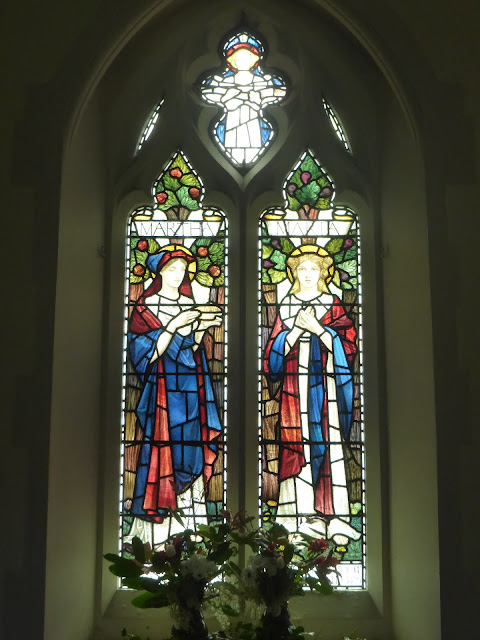 The nave has this gorgeous window from 1895, depicting Martha and Mary (who were sisters who opened their home to Jesus while he was travelling with his disciples). They are both very handsome; the former carries a covered dish, while the latter looks distracted and seems to be wringing her hands.

The window was made by James Powell and Sons (many of the county's churches contain examples of their work, for example Weston), and designed by Helen Coombe (1864-1937). She was an artist** who had been a pupil of Selwyn Image (see below) and who married the art critic and painter Roger Fry (who introduced the scandalised British public to what he termed 'Post-Impressionist' paintings) in 1896. Tragically, her life and career were blighted by serious problems with her mental health, and this is her only known design for stained glass. 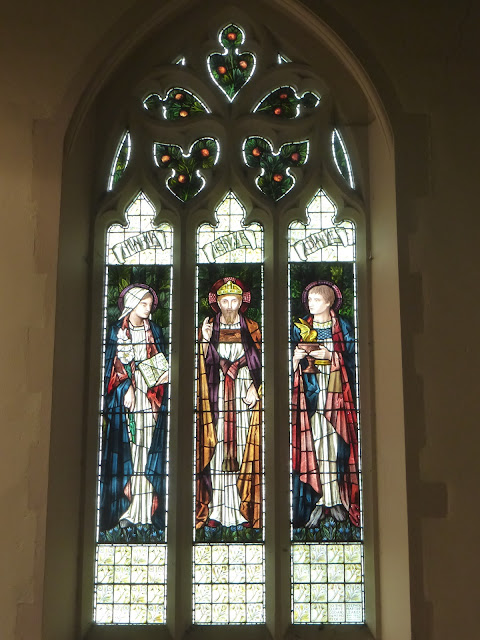 The west window is by Selwyn Image (1849-1930)***, an important artist in the Arts and Crafts movement, and made by Heaton, Butler and Bayne. It depicts Mary, Jesus and St John, and Bettley/Pevsner rave about it: 'It is most extraordinary for [1895], evidently with knowledge of what Burne-Jones had done for Morris & Co windows, but entirely original in the sombre glowing colours and the rather mannered, Romanesque central figure of Christ. The diagonal trails of leaves above and below the figures are charming, as are all the decorative features. The window might easily be misdated as work of c.1930.' I'll confine myself to pointing out that John seems to have a miniature dragon bathing in his chalice, though he seems commendably unconcerned about it. This is a reference to the tradition that once he was offered some wine which he suspected was poisoned, so he blessed it before he drank and the poison was expelled in the form of a snake. Some artists upgrade the snake to a dragon to make the scene more dramatic. 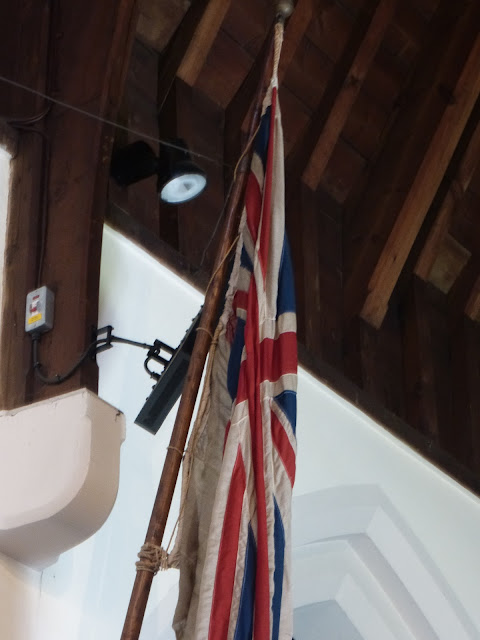 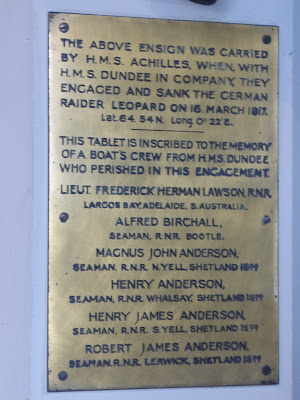 Hanging in the nave is the very evocative ensign of the cruiser HMS Achilles which, together with the armed boarding steamer HMS Dundee, engaged and sank the German auxiliary cruiser SMS Leopard in the North Sea in 1917. The Leopard was disguised as a Norwegian freighter; the Achilles, realising that it was suspicious, stopped it and the Dundee sent a boarding party of an officer and five men to investigate. The Leopard tried to turn the tables by taking the party prisoners, and fired torpedoes at the Dundee, which only just avoided them. The British ships opened fire and sank the Leopard with all 319 hands, plus the six members of the boarding party. 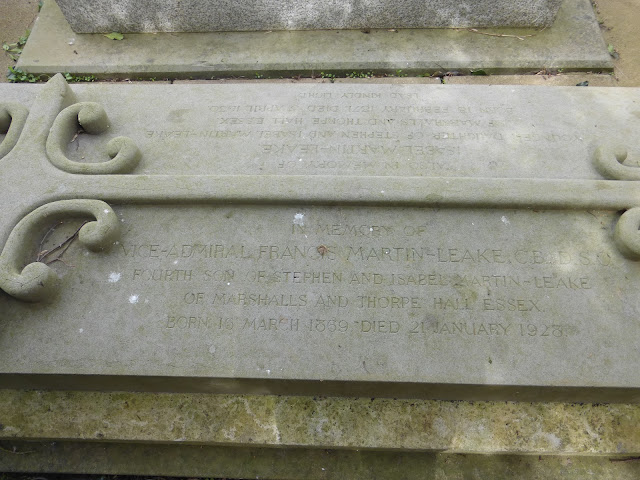 The captain of the Achilles on that day was Francis Martin-Leake. In September 1914 he was the captain of HMS Pathfinder when it became the first ship in history to be sunk by a self-propelled torpedo fired by a submarine, the German U-21. There were only eighteen survivors. Leake, who lived in High Cross,  suffered head injuries during this incident, the after effects of which were partly responsible for his death in 1928 aged 59 (by which time he had been awarded a DSO (Distinguished Service Order) and was an admiral). 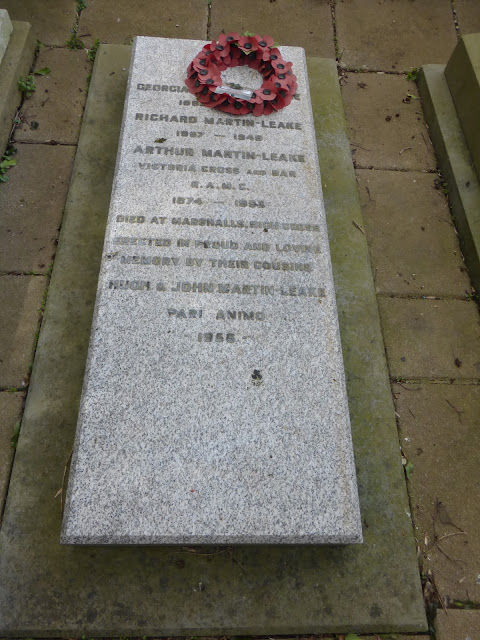 He was the brother of Arthur Martin-Leake (1874-1953), one of only three people to be awarded Victoria Cross (the highest award for bravery in Britain) and bar (that is, twice). He qualified as a doctor in 1893, and joined the army as a medic during the Boer War (1899-1902). He was first decorated in 1902 when he attended to wounded men under heavy fire, despite being wounded himself. The second occasion was won in similar circumstances in 1914 in Belgium during the First World War. He must have been quite a man. His ashes are buried, along with his brother and other family members, in the churchyard at High Cross.

* Alec Clifton-Taylor has this to say about ragstone: it is 'coarse-textured and brittle, and treacherous too, for it includes sandy patches which can be very soft ... and unfortunately, because of its relative cheapness, it was much patronised by Victorian architects in the London area. We say unfortunately, because Kentish rag is an unaccommodating stone, difficult to dress, and even to square at all precisely, so its uneven surface is all too prone to harbour dirt.' English Stone Building, (co-written with A S Ireson, 1983).

** There's only one oil painting by her in UK public collections; see here.

*** There's another window by him in Waterford. 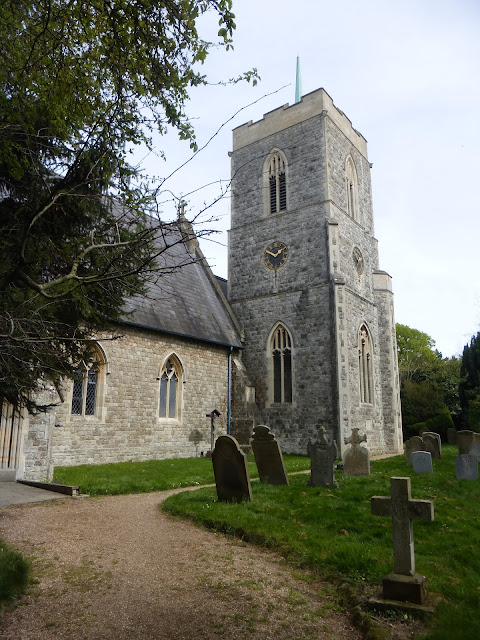 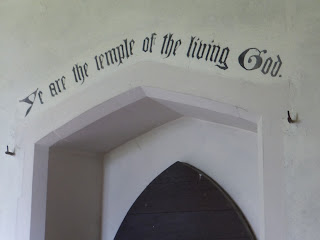 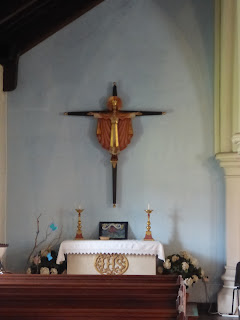 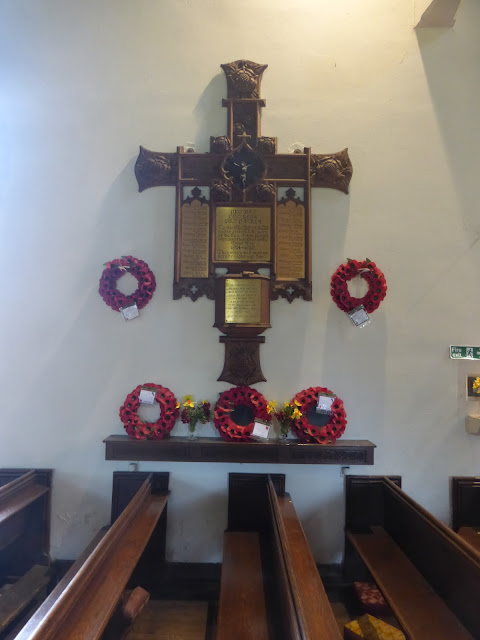 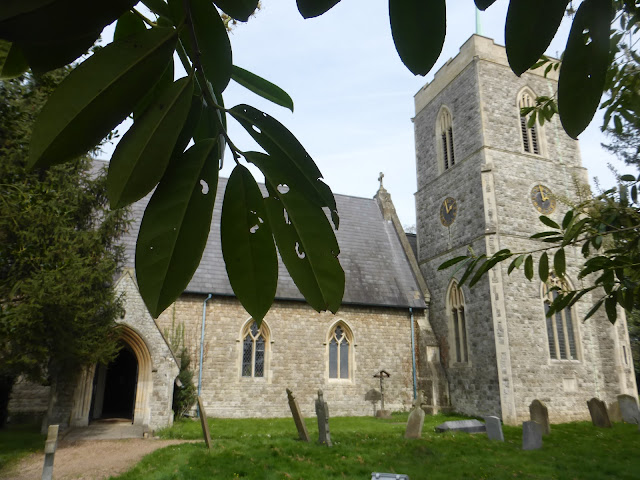 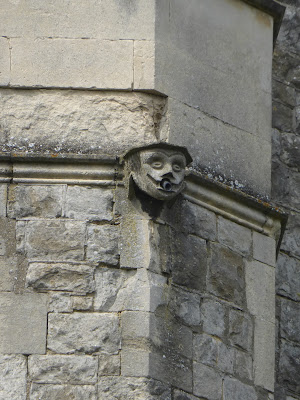 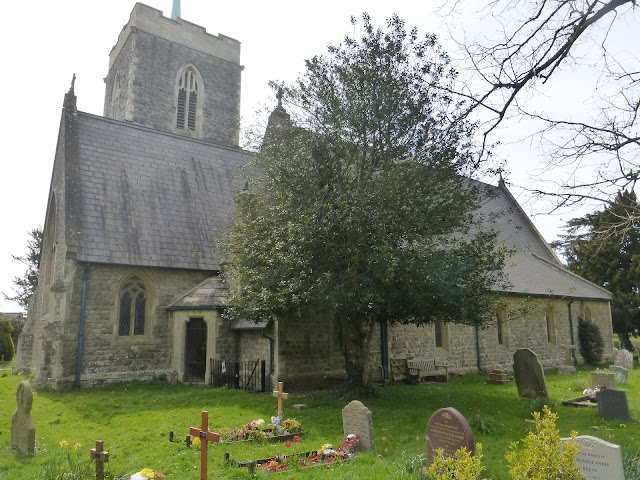 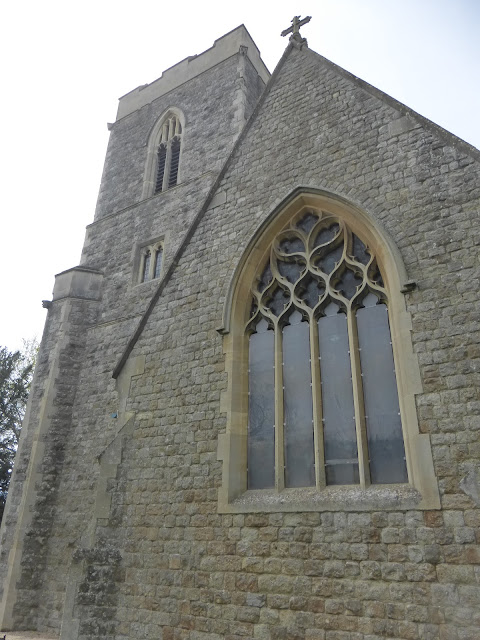 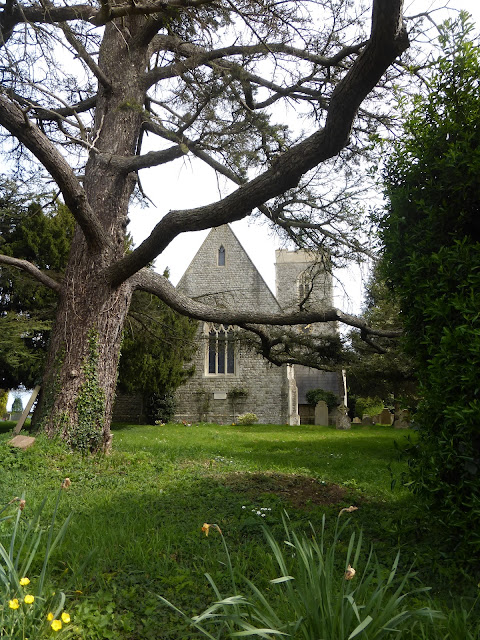 Posted by David Gouldstone at 09:19