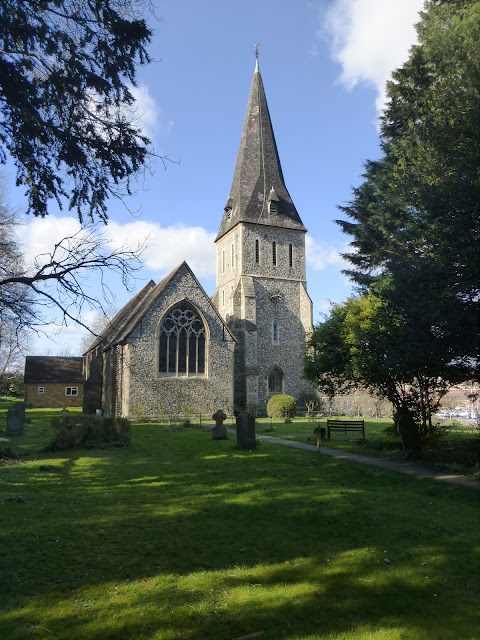 Apsley* church's location isn't very propitious, being right next to a busy main road and a sprawling Sainsbury's car park. However, the church has never been in a rural setting, as when it was built in 1871 the area was industrial and known as Two Waters and Nash Mills, the mills being chiefly dedicated to making paper. Just to the north is Frogmore Paper Mill, the world's oldest mechanised paper mill (1803). (Hertfordshire is also the home of the oldest English paper mill, at Sele Mill near Hertford (1488)). Basildon Bond stationery, the name of which anyone over about forty is bound to recognise, was made in Apsley; (the brand still exists but is made elsewhere).

The paper business was bought by John Dickinson in 1809, backed by George Longman (of the Longman publishing firm, which also still exists). In 1871 the latter's descendant Charles Longman, a senior partner in the mill, contributed a large sum towards the building of a new church partly to serve the needs of the workers, and partly as a memorial to his wife Anna Maria, who had died in 1860.

The architect was Joseph Clarke (1819/20-1888), who was the diocesan surveyor to Canterbury and Rochester (and that of St Albans from its foundation in 1877), and was consequently responsible for numerous churches and schools across the whole south east (and elsewhere). Surprisingly, Apsley is one of only two complete churches by him in Hertfordshire (the other is Holy Trinity in Bishop's Stortford), but he made additions to and restored a dozen or so, including Kimpton and St Ippolyts. 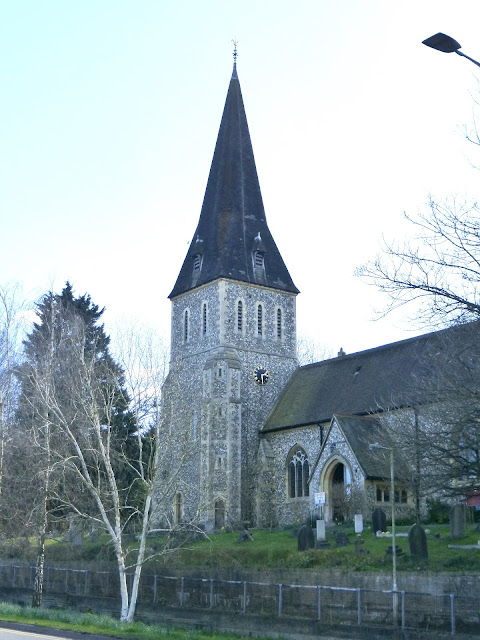 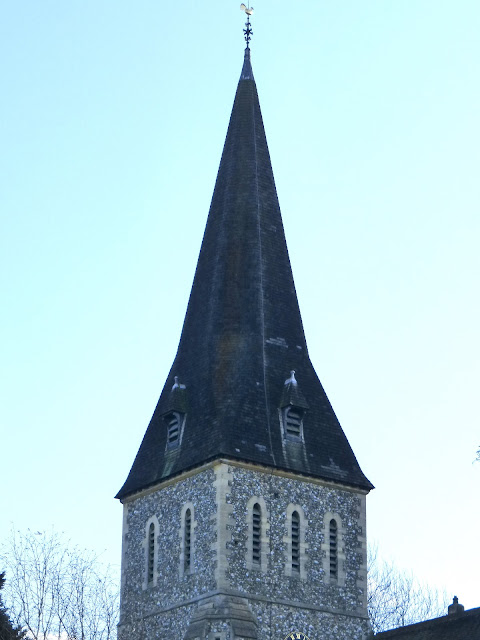 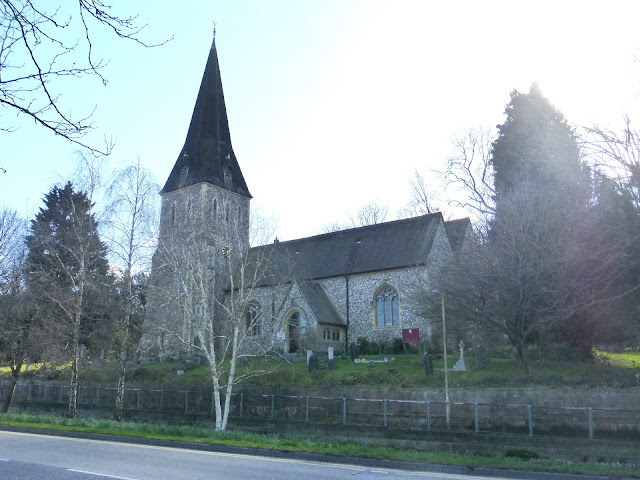 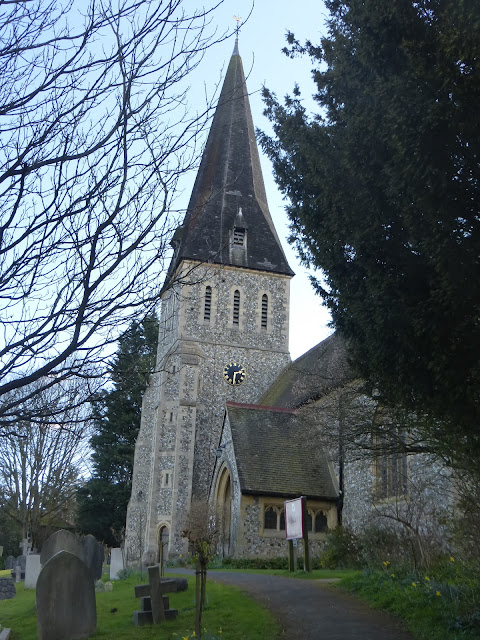 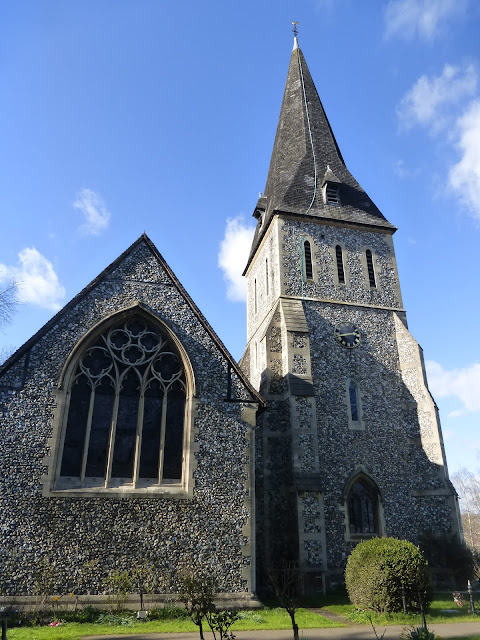 Clarke chose to build the tower in the Early English style (or 'First Pointed' as it was most likely known at the time), with simple lancet windows; it is placed, rather unusually, on the north of the chancel. The handsome shingled splay-footed spire** has lucarnes (small gabled windows) just above the eaves.

However, he chose early Decorated ('Second Pointed') for the exterior of the rest of the church, and he made a very convincing job of it. 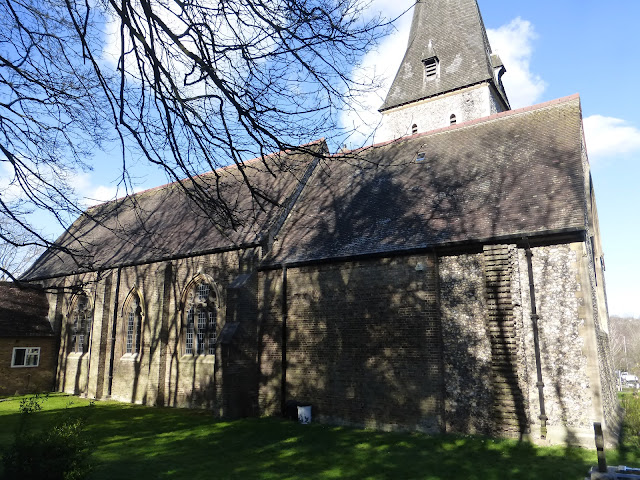 For some reason - presumably the parish's ambitions outran its pockets - the church was not completed to Clarke's original plans. The south wall of the nave is of 'temporary' brick, and that of the chancel shows the keying which was intended to be the start of the east wall of a chapel which was never built. (It's notable that the building of a spire was prioritised over an aisle.) 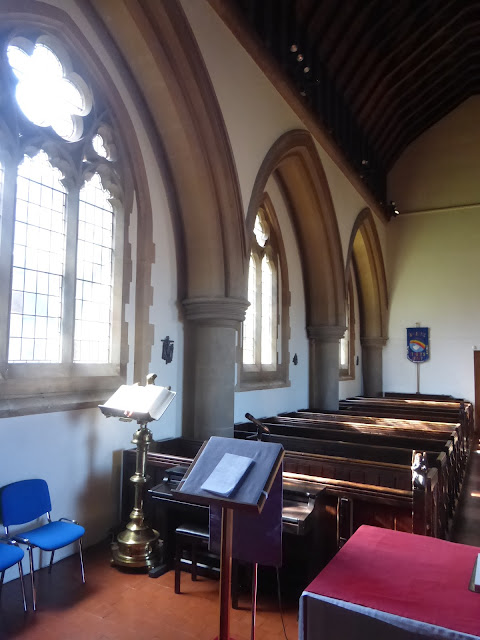 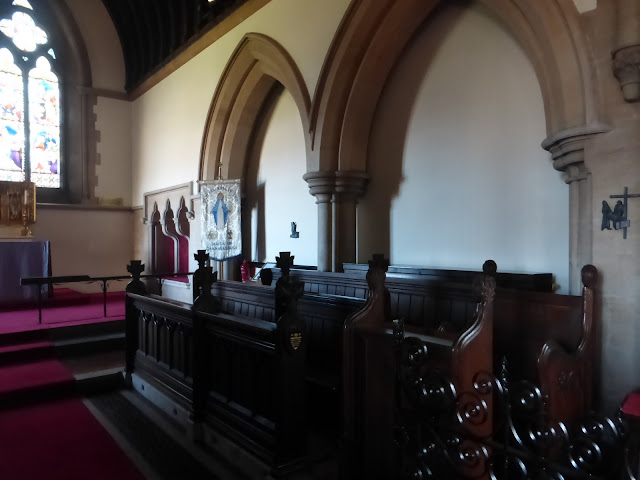 This is even more evident inside, where arcades disappointingly lead not to aisles but blank walls. The arcades of the nave have simple round piers typical of the relatively plain Early English style, while those of the chancel are Decorated, the elaboration and richness enhancing the sanctity of the space. 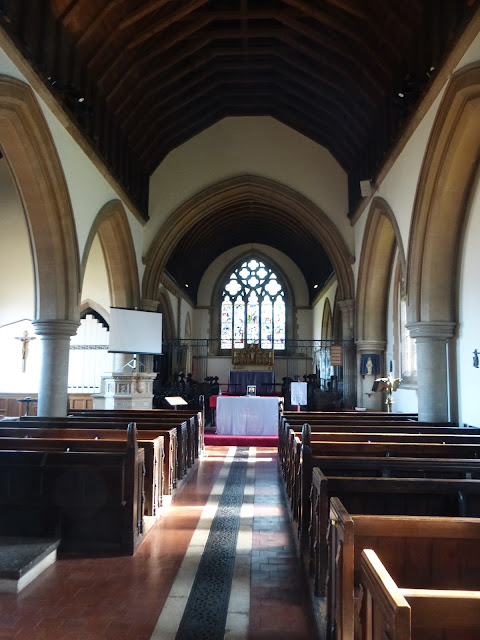 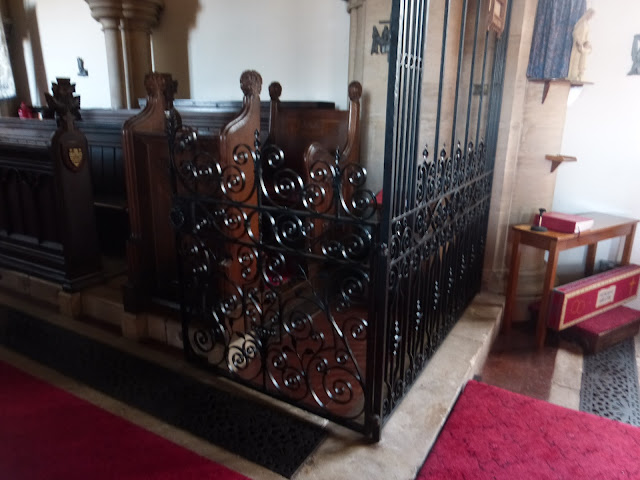 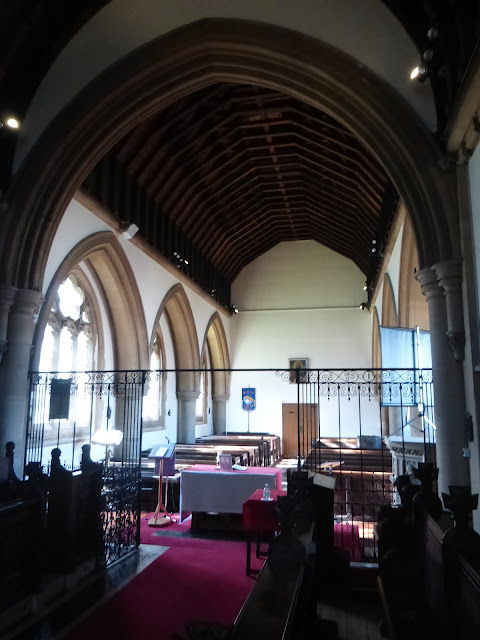 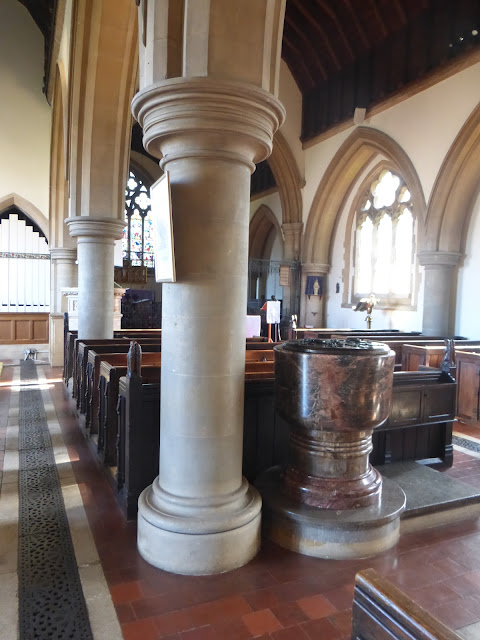 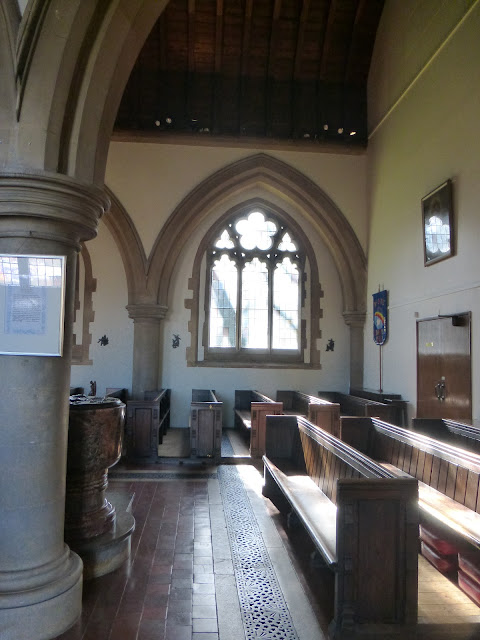 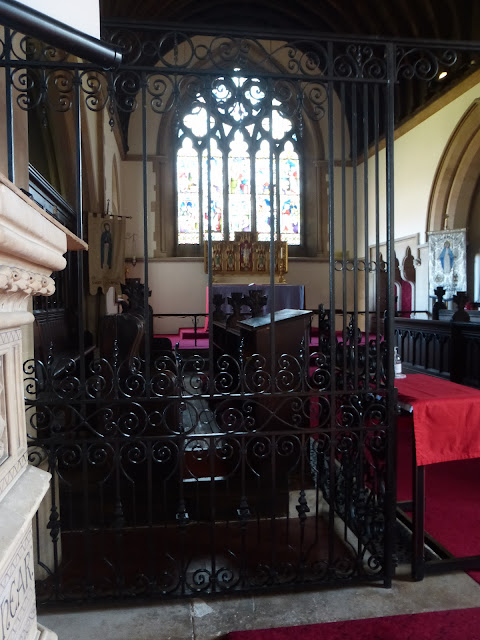 There are some objects of interest in the church. The wrought iron chancel screen is very attractive; I don't know if it's part of the original furnishings. 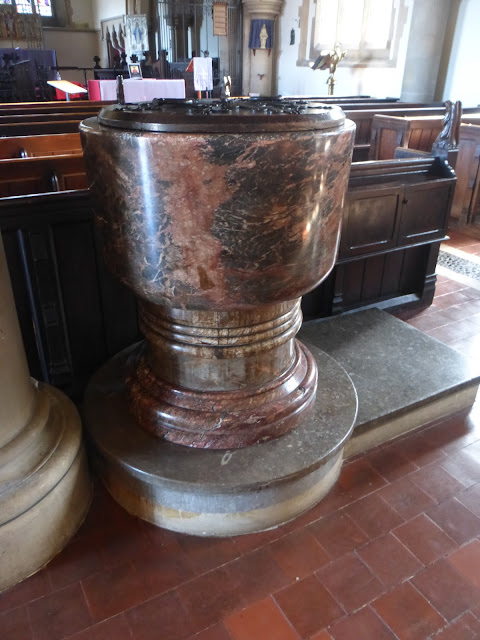 The font (which is similar to that in Hucking, Kent, which Clarke restored in 1867-8) is of mottled brown marble, which stands out against the pale limestone of the other stonework of the interior. 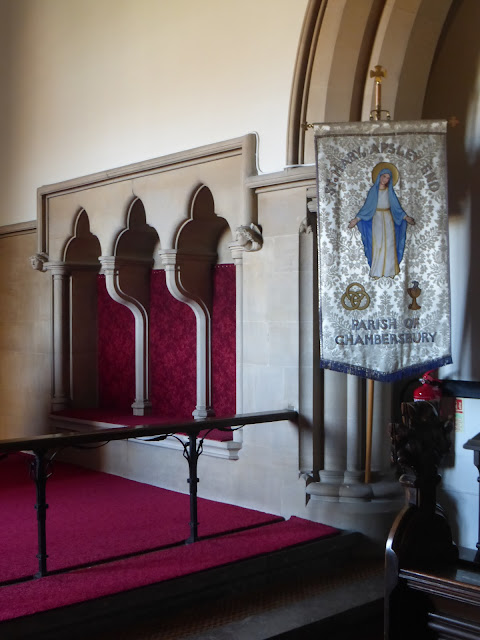 The sedilia has three seats with elegant dividers. I didn't notice the altar rails when I was in the church, but looking at my photo now it seems that they have Art Nouveauish tendrils. The overall impression is that Clarke did an excellent job and paid meticulous attention to detail. 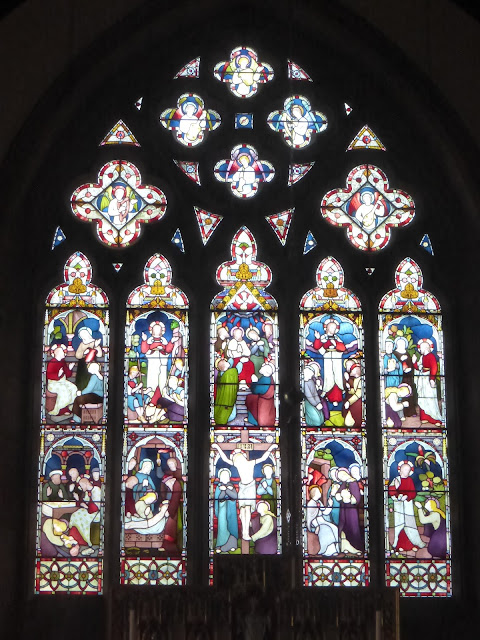 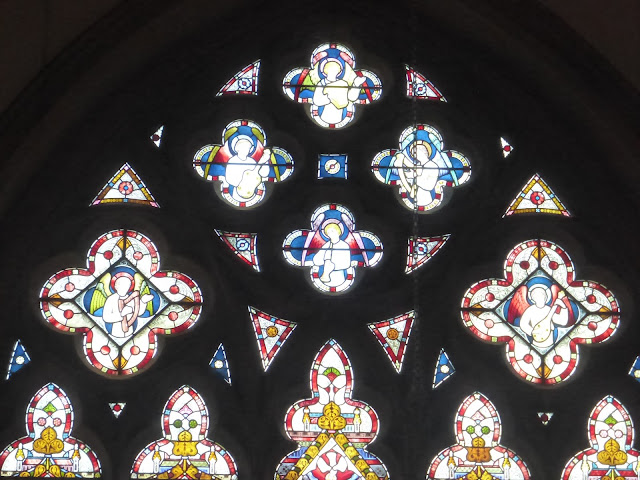 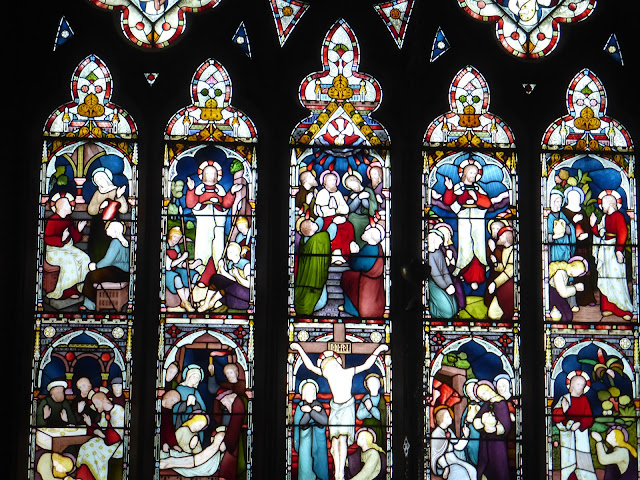 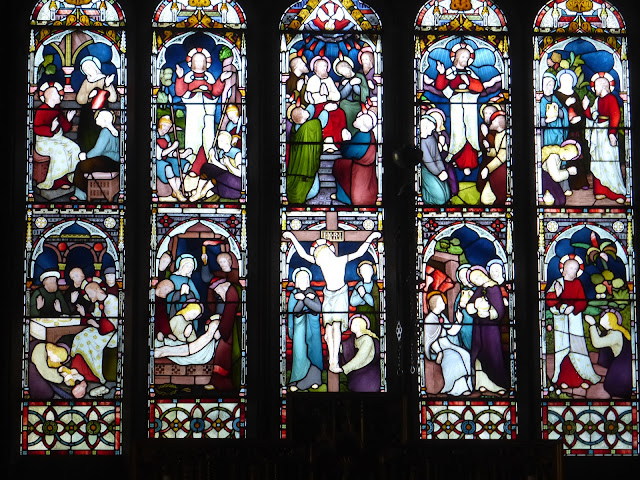 The very fine east window is by Frederick Preedy (1820-98); it's undated, and it's unknown whether Clarke was responsible for commissioning it or not. Preedy, who was also an architect, and whose only other Herts windows are in Butterfield's Holy Trinity, Hitchin, seems to me to be unfairly underrated. The two standard guide books to stained glass in England, by June Osborne and Painton Cowen respectively, mention him only in passing (Osborne barely manages even that), and Martin Harrison's Victorian Stained Glass allots him just one short paragraph. Preedy's work reminds me of that of Clayton and Bell at their best: the linear style (very suited to the medium), the ability to place numerous figures in small spaces without making them look cramped, the assured sense of design, the restrained emotionality, the stylised theatricality which doesn't tip over into pomposity, the blocks of strong colour (Preedy outdoes Clayton and Bell here), and the use of medieval precedents as starting points without merely imitating.
The upper tier of scenes in the main lights depict: Christ in the house of Martha and Mary, the Risen Christ, Pentecost, Ascension, and Christ with the three Marys. The lower tier: Mary washing Christ's feet, Entombment, Crucifixion, the Angel at the Tomb, and Noli Me Tangere.
I don't normally expect Victorian churches in built up areas to be open, but as I passed through Apsley I noticed that there was a sign outside the church proclaiming its accessibility. I don't know if this is always the case, but, while it's perhaps not worth going a long way out of your way to see, it is certainly worth going in if you get the chance.

* The church sign and literature locate it in Apsley End. There is a place called Apsley End, but it's in Bedfordshire. The Ordnance Survey, Google maps, Bettley/Pevsner etc all call the place in question simply Apsley.

** The Statutory Listing calls it a 'chamfer spire', not a term I've come across before. 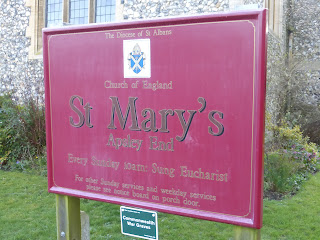 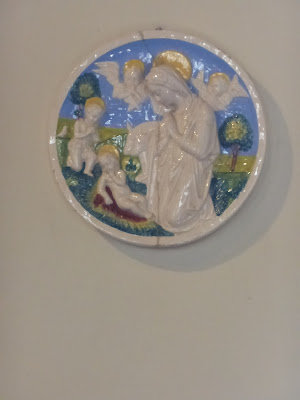 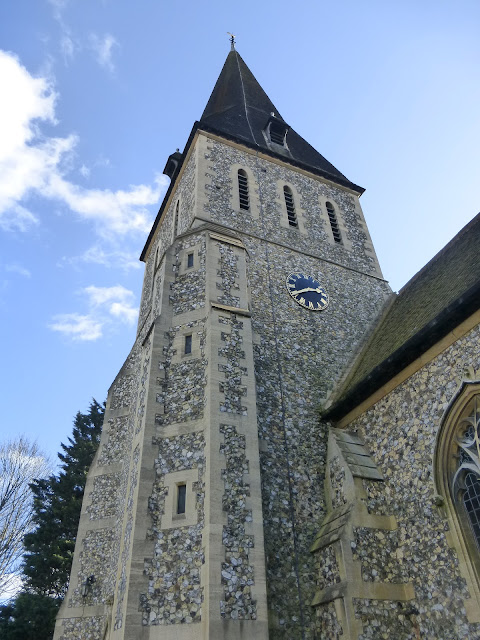 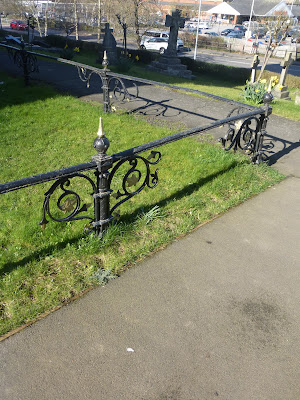 Posted by David Gouldstone at 19:16