Norton church, Herts - a memorial to Ann Cole, who died before she was born 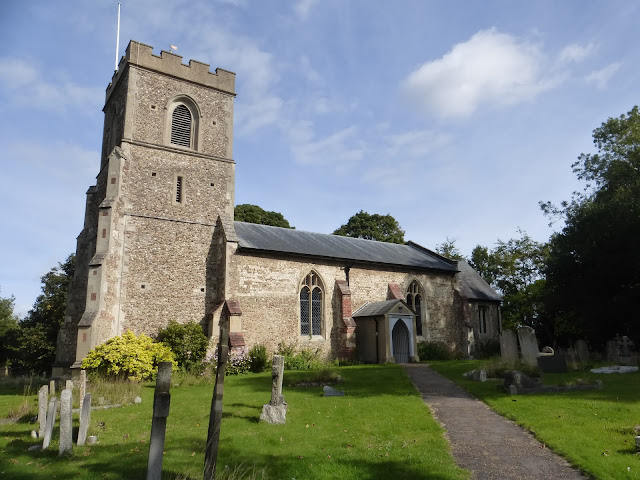 'Norton' - meaning 'north settlement' (that is, a place north of somewhere else) - is one of the commonest English place-names. There are at least a dozen places called simply Norton, plus many others which use the name as part of a longer one, such as Norton Disney in Lincolnshire, and, in Somerset,  Midsomer Norton (which sounds magical, as if the dahlias and sunflowers are always in bloom and there are light, balmy evenings all the year round, but in fact is dismal, being brooded over by slag heaps).

Hertfordshire's Norton is one of the three ancient settlements subsumed by Letchworth Garden City (the others are Willian and, of course, Letchworth). It retains something of a village feel, with plenty of surviving pre-1903 (when the Garden City was founded) buildings. I particularly like Croft Lane, which combines genuine older buildings with some superb Arts and Crafts-influenced early 20th century houses. 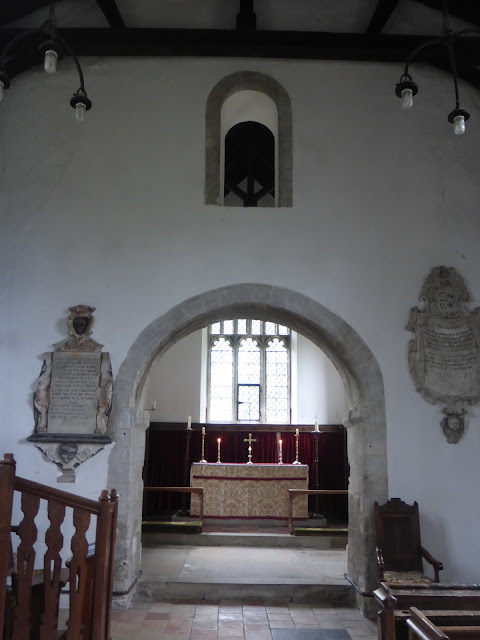 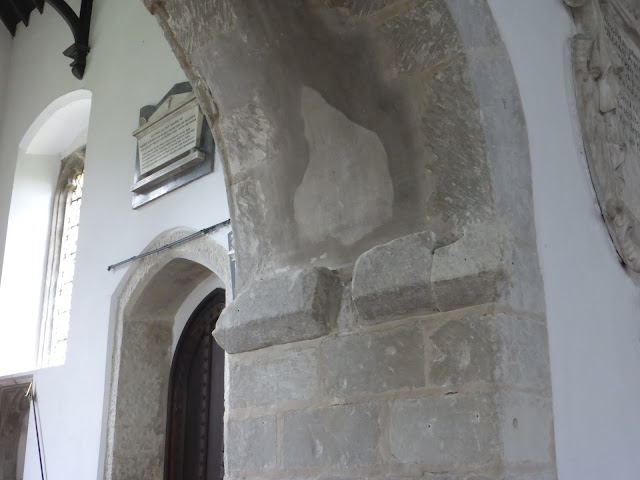 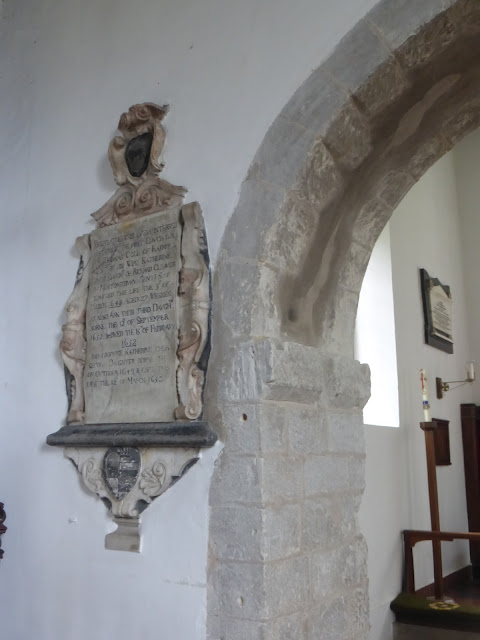 As is the case in very many places in England and elsewhere, the church is by some distance the oldest building (though it's been much altered over the centuries). As is also the case in many places, the church has Norman origins. The chancel arch dates from c.1100; its antiquity and simplicity endow it with a certain presence. It's extremely plain: the arch isn't even chamfered, let alone moulded, and the imposts (the horizontal mouldings at the springing of the arch) are as rudimentary as can be. Curiously, they have a little channel apparently cut into them about half way along; was this perhaps to accommodate a chancel screen? 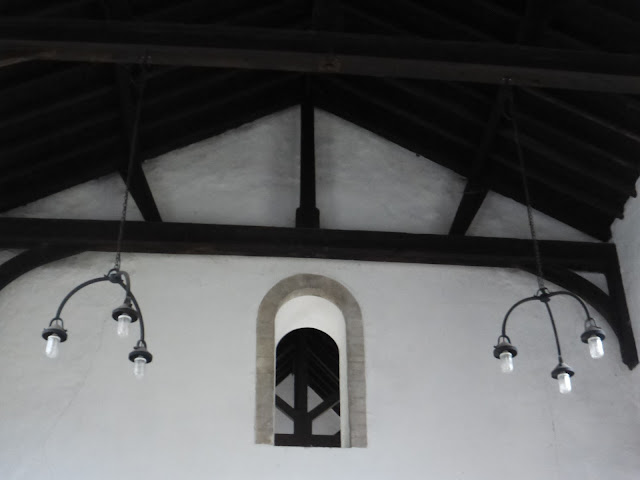 A word of praise here for the spartan but attractive light fittings, something churches so often get wrong.

A fairly unusual feature is the opening over the chancel arch. It's even plainer than the arch, having no imposts, and round-headed; could it be Norman too? Being high up it's of course hard to inspect and thus the age of its masonry is difficult to assess; from the ground it looks distinctly less ancient than the chancel arch. Neither Pevsner/Bettley, nor the statutory listing, nor the Victoria County History, nor the Royal Commission on Historical Monuments even mention its existence, which implies that they think it's obviously modern and of no interest. If it's not a window that was once above a much lower early Norman chancel roof, however, what is its purpose, and when was it inserted?

After I'd finished the first version of this post I contacted James Bettley, the author of the 3rd edition of the Hertfordshire volume of The Buildings of England (colloquially known simply as 'Pevsner'), to ask him about this opening, and he was kind enough to reply. At first he could say only that, despite some research having been done, nothing was known about it. The only, very tentative, point he could make was that it would have provided a view from the rood screen into the chancel. 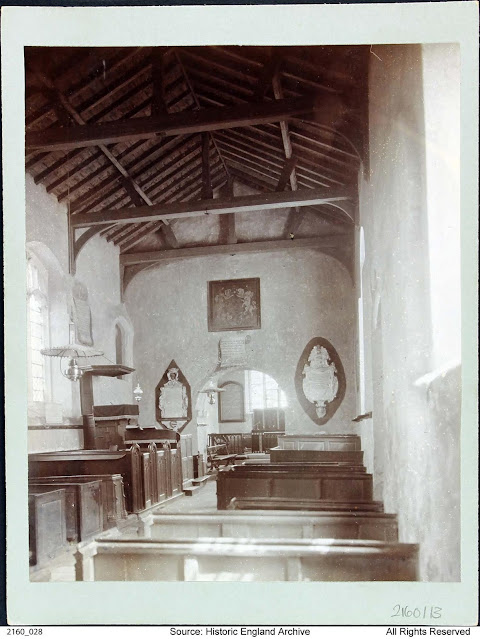 However, after a handful of emails back and forth he wrote to say that he'd found an illuminating photograph dating from c.1895 in the Historic England archive, reproduced above. It shows that at this date there was no opening (there's a framed royal coat of arms over the chancel arch, and beneath that a scroll painted on the plaster). The obvious conclusion to jump to from this evidence is that the opening dates from the restoration of the church in 1908-9, by Walter Millard.*

But that doesn't really make much sense. Bettley suggests, and I concur, that it's extremely unlikely that Millard would have introduced such a feature. Why would he have done? It serves no function, and would simply have added to the expense of the restoration. A much better explanation is that an opening over the chancel arch existed at some earlier date (either as an original, Norman, feature, or one added later). For some unknown reason, it was subsequently blocked, and in 1908 Millard found it and decided to open it up.

This adds to our knowledge of the church's story, but doesn't answer our initial questions. We still don't know when or why the opening was first made. And now we also don't know when and why it was blocked, and why Millard made it look Norman - did he do so because he could tell that it was originally from that period, or, if it was post-Norman, simply because he thought a round arch would be a better stylistic fit with the existing chancel arch?

There's one more puzzle. You'd have thought that the discovery and reinstatement of an ancient window (if that's what it was) would have aroused interest in and comment from local antiquarians. However, no sign of this has turned up yet. There's no contemporary reference to Norton church on the contents page of the East Herts Archaeological Society Transactions, and the transactions of the St Albans & Hertfordshire Architectural & Archaeological Society (their website is down as I write this) don't seem to be available for that period. Perhaps something will be found. (At the moment access to the Herts County Record Office is awkward because of the virus.)

For what it's worth, my guess - and I admit this is pure speculation, albeit plausible speculation - is that the original Norman chancel was much lower than the nave, and that there was a window over the chancel arch to provide more light in the nave. Perhaps it was smaller than the opening made by Millard. In 1814 the current chancel was built on a bigger scale, which rendered the window functionless, so it was blocked. A little less than a century later it was found by Millard, who thought that, although doing so would serve no practical function, reinstating it would add antiquarian interest to the church. 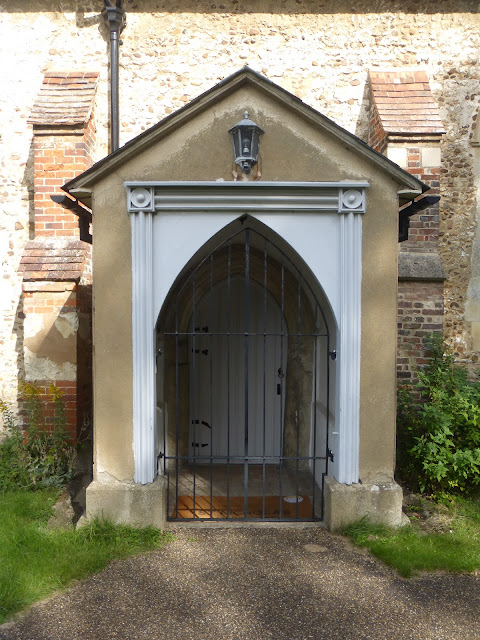 The rest of the church, except the chancel and south porch, is an early 15th century rebuilding of the original Norman structure, and has in turn been much restored, particularly by Millard. The chancel and south porch were added, as stated above, in 1814, not a date at which much church building was going on in most of the country. Why the work was carried out in Norton at this particular time I don't know. I suspect that the tracery of the chancel windows was renewed in the 19th century, or by Millard, as it's much too archaeologically accurate (that is, too much like genuine 15th century windows) to have been built in Georgian times. The outer doorway of the porch, presumably of this date, combines Gothic and classical elements, and is rather handsome. 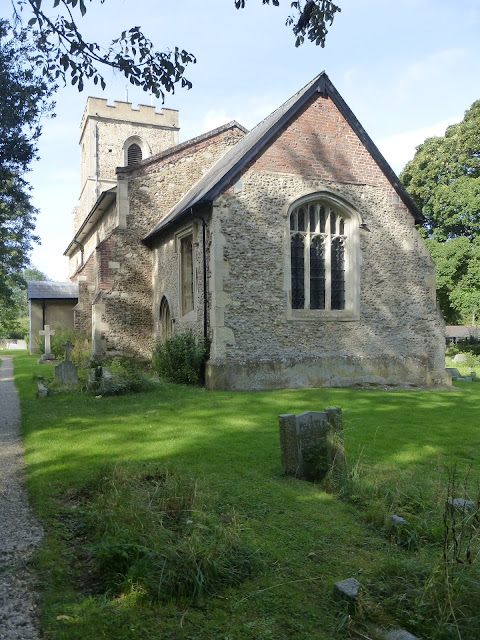 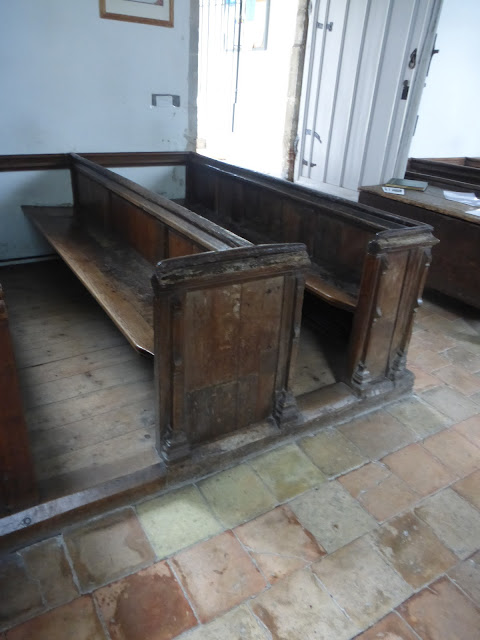 There are some 15th century benches, much like those in, for example, Caldecote and Wallington. 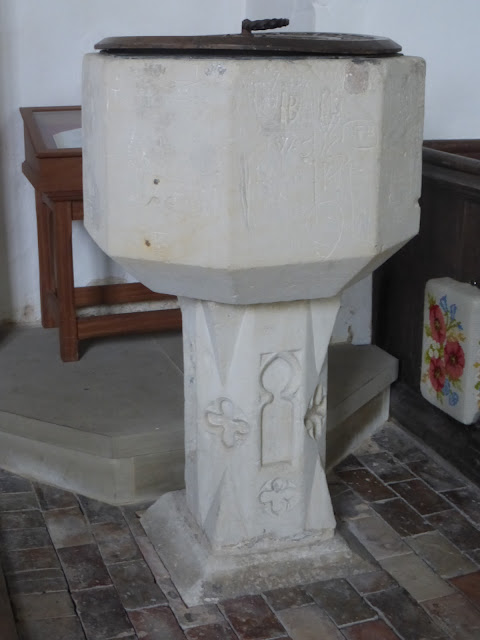 The font is 13th century (RCHM), early 14th century (statutory listing), 14th century (Pevsner/Bettley), or 15th century (VCH). The bowl is plain (except for much graffiti, which I didn't look at properly), while the base (which looks too thin) is decorated with quatrefoils and simple shapes that would be found in the tracery of a late medieval (hence certainly not 13th century) window. 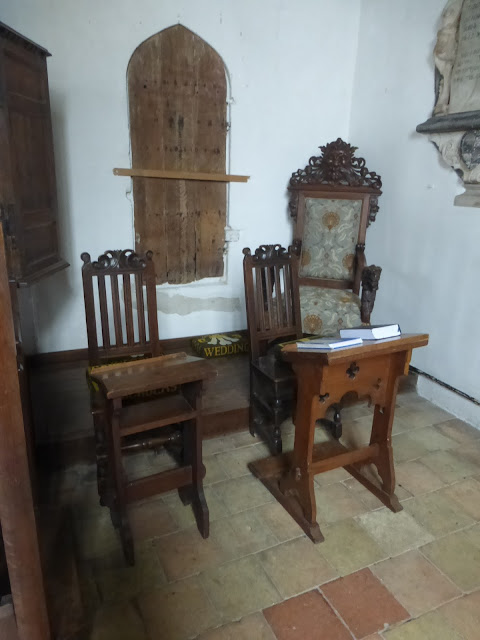 The two doors which once lead to the long-vanished rood loft survive; the lower one still has what looks like its original door. 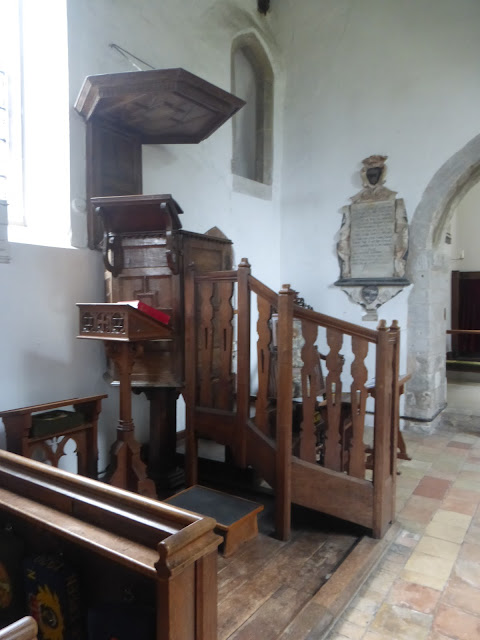 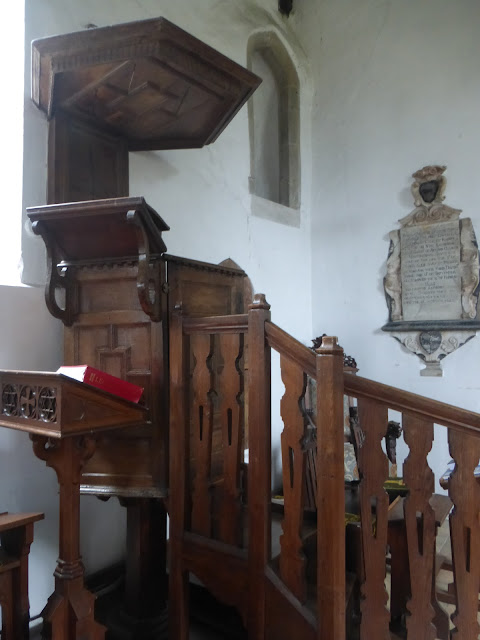 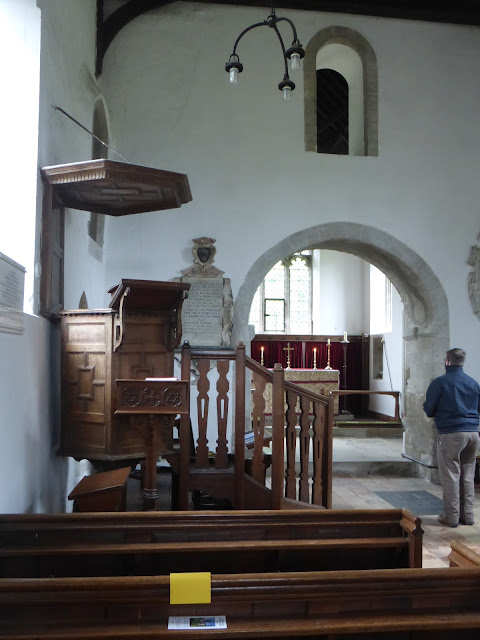 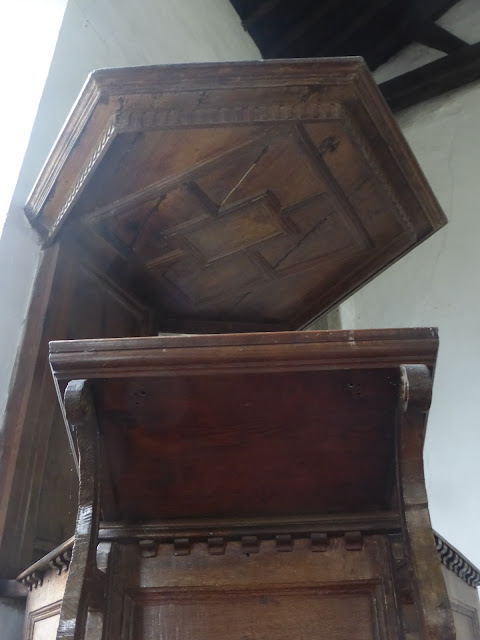 The pulpit, with a tester (a canopy intended to reflect the sound of the speaker's voice down to the congregation) is 17th century (the VCH specifies Jacobean, but it doesn't look elaborate enough to be that early). The stairs are a nice job by Millard. 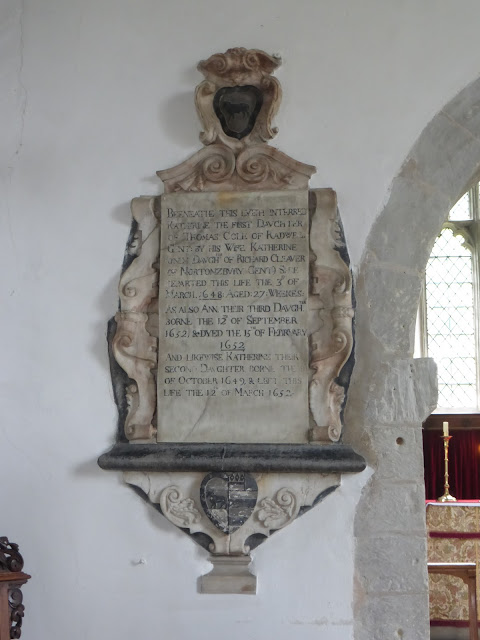 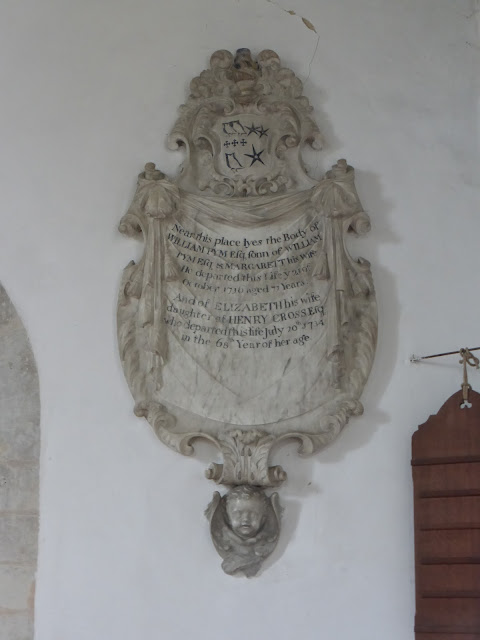 There are two enjoyable baroque wall monuments, one on either side of the chancel arch. I call them 'enjoyable' because I'm heartlessly looking at them purely aesthetically and historically. When I read the inscription of the one on the left such a judgement crumbles to dust. It records the deaths of the three daughters of Thomas and Katherine Cole of Radwell (why the memorial is in Norton, then, I don't know, except that Katherine was the daughter of Richard Cleaver of Nortonzbvry, as it's spelt). The first daughter, named Katherine after her mother, died in 1649, aged 27 weeks. Later the same year their second daughter, also called Katherine, was born, followed in 1652 by Ann.

However, cruelly, Ann died in February 1653, aged five months. At first sight, the record of her birth and death seems to defy sense. She was born 12th September 1652, and died 15th February in the same year. What? She died before she was born? But it's not a mistake; it's simply that the Old Style calendar was in use, and in fact she died in what we'd call February 1653.** Less than a month later, in March 1653, the second daughter Katherine 'left this life', aged three and a half. It's unclear whether Thomas and Katherine had any more children. 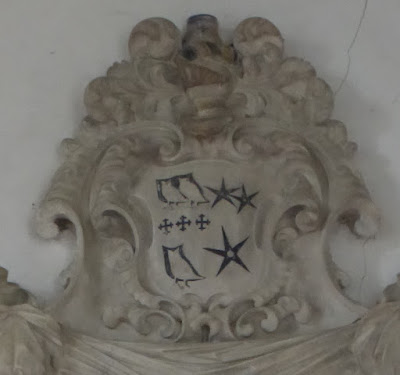 The monument on the right is, thank goodness, not traumatising. It commemorates the deaths of William Pym, aged a ripe old 71, in 1716, and his wife Elizabeth, aged 68, in 1734. The shield on the top bears three five-pointed stars, three owls and three cross crosslets. (I've read that Francis Pym, the moderate Tory politician prominent in the 70s and 80s, was descended from William and Elizabeth. Maybe Barbara Pym, one of my favourite novelists, was also related to them.)
I lived ten minutes walk from the church for thirteen years but have been inside only twice, despite often, ever hopeful, trying the door. Once was on the biennial Norton walkabout, when local residents open their gardens one Saturday to raise funds for the church. The other was earlier this week; I'd been passing a few weeks earlier and casually stopped to stroll around, and noticed that there was a sign saying that the church is 'open for private prayer'*** on Thursdays from 1.30 to 3.30. Thus, paradoxically, at a time when many places are closed much more often than they were before the Covid crisis, Norton church (and others) are open much more frequently than usual (in Norton's case two hours a week, as opposed to zero hours a week in normal circumstances).
The church is obviously loved and cherished by its parishioners, and while it's not a major church a visit is certainly worthwhile and rewarding. I hope that the practice of opening it regularly, albeit for just a few hours, will continue even when we can finally get back to something like our old lives.
(Updated 11th Oct 2020)

* Walter Millard (1854-1936) worked as an assistant to William Burgess and G E Street. He had his own practice in London from 1883. From about 1914 he lived in Hitchin. He also restored St Mary's, Letchworth, and designed the war memorial in Hitchin.

The New Style wasn't officially adopted in Britain until 1752, when the Gregorian calendar finally succeeded the Julian. (I say 'finally' because much of Europe had been using it since 1582; not for the last time Britain was reluctant to toe what it saw as the European (and in this case Roman Catholic) line, despite the impracticality of standing aloof.) However, the New Style was widely used for at least a century before the official changeover. Samuel Pepys, for example, writing his diary in the 1660s evidently accepted that 1st January was the beginning of the year.

*** 'Open for private prayer' is not, I'm sure, intended to imply that visitors who enter for other purposes, such as wanting to sit quietly, or to look around, are unwanted. Certainly the lady who was in attendance when I visited was very welcoming. But the wording might put some potential visitors off. Surely a simple 'open' is sufficient. 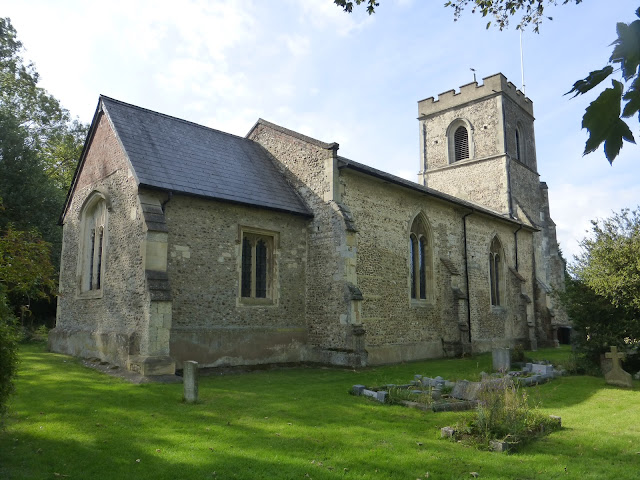 Posted by David Gouldstone at 12:26