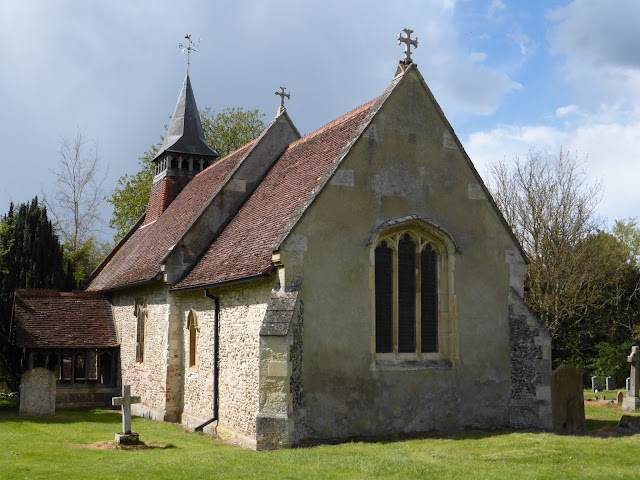 Radwell is approached down a dead-end street that ducks under the forbidding A1(M) and continues to the River Ivel. But despite the motorway it is peacefully pastoral, like nearby Newnham. The church is treated rather brusquely by Pevsner; he dismisses it as 'mostly of the 19th century', which is not completely untrue but hardly an adequate description. I trust that when, one long awaited day, the 3rd edition of the Hertfordshire volume of the Buildings of England sees the light it will do the church more justice. (He does cover the contents reasonably comprehensively, however.) 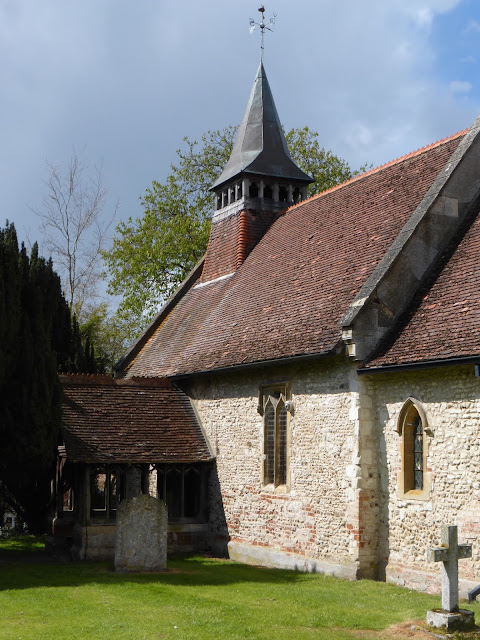 The earliest datable features are the mid 14th century chancel arch and slightly later south doorway, and the walls are probably coeval. 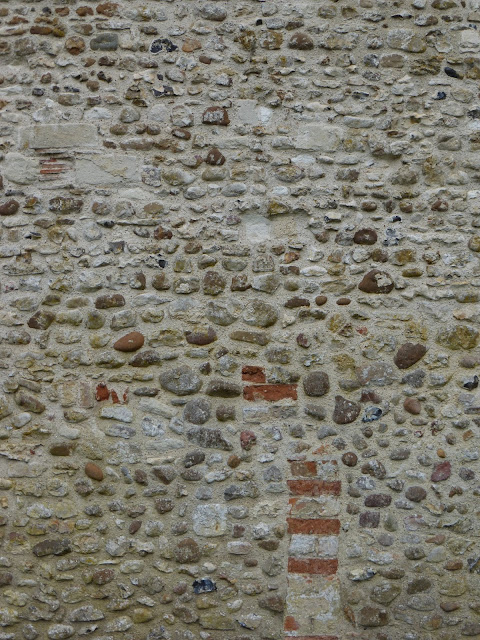 They were apparently plastered (again, like Newnham) until relatively recently; only the east end hasn't been stripped. The exposed materials are pleasingly hodgepodge, with flint and clunch rubble together with carstone pebbles. (Carstone is an orangey-red rock very typical of Bedfordshire buildings; Radwell is just yards from the county boundary.) In the picture above some brick is also visible, and just below the top left some tiles (could they be reused Roman bricks?).

The east window, and perhaps the tower arch (which supports no tower), are of c.1500; all the other architectural features are Victorian (1875 and 1882), including the attractive south porch, and, best of all, the oak and copper bellcote with splay-footed spirelet. I especially like the view from the east; the eye moves from the obtuse angle of the east window up to the almost equilateral triangles of the chancel and nave gables, then to the various geometrical shapes at the base of the spirelet, and finally to the acute angle of the spirelet itself pointing to the sky.

There is a reasonable amount to see in the church, especially considering that it's small and heavily restored, but try to visit on a bright day. All the windows that haven't got stained glass are frosted, presumably in an attempt to create a 'religious' atmosphere, but the effect is gloomy and submarine. Here, and in other similarly afflicted churches, clear glass should be substituted when funds allow. 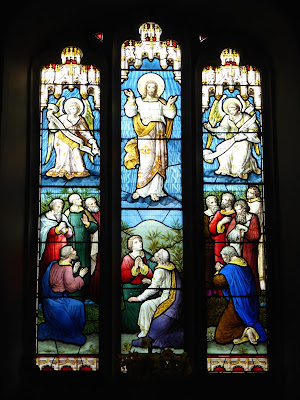 The stained glass (of 1881) in the east window is in the style of the early 16th century (appropriately, as that's when the window itself dates from) and is successful, but the other stained glass, of twenty or so years later, is feeble. According to Church Stained Glass Windows all the glass is by the prolific firm Ward and Hughes, and it's alarming to see how their standards fell around the turn of the century. Sadly, this was the case with most late Victorian and Edwardian stained glass manufacturers. 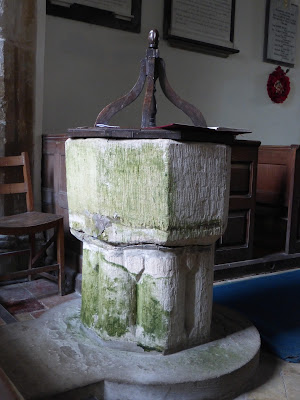 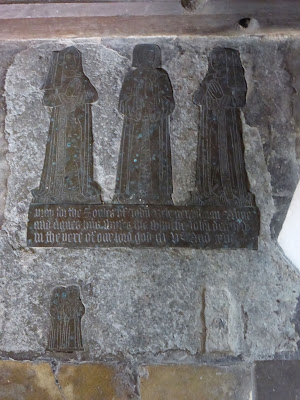 There's a crude, battered late medieval font, and several brasses (worth looking at if you like that sort of thing). 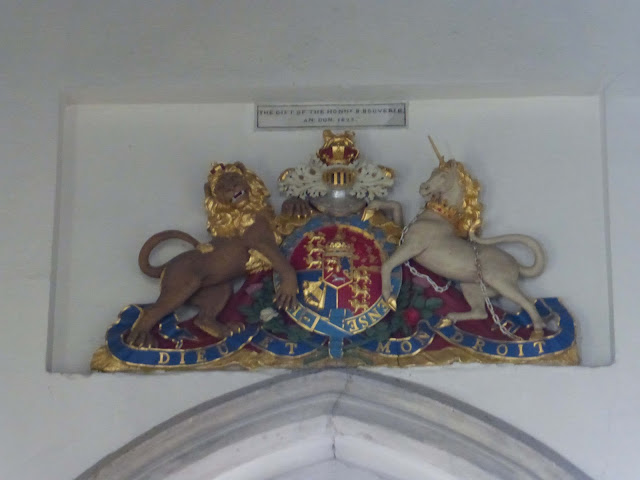 Over the tower arch (not the chancel arch, as Pevsner says) is a fine royal coat of arms from 1825 (i.e. George IV), though it's hard to see properly (or photograph) in the murk high up in the roof.

But what makes the church worth going out of your way to visit is the fine sequence of monuments from the late Elizabethan to the mid Georgian periods. They've been brightly gilded and painted in fairground colours, probably fairly recently, though I suspect that they would have originally been just as loud. Some will find the colours gaudy, or even in poor taste, but I think the monuments look splendidly ostentatious, just as those commemorated intended. You don't shell out a small fortune on a monument and then want it to go unnoticed.

I'm not going to list the most notable monuments chronologically or topographically, but in an aesthetic crescendo. 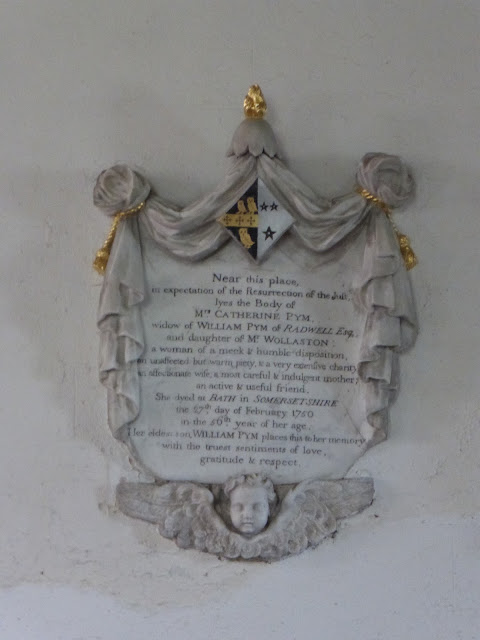 This one commemorates Catherine Pym, 'a woman of meek and humble disposition' apparently, who died in 1750. I like the way the curtains are tied back by gold ropes and the three owls in the heraldic shield. The monument is surmounted by a flame, symbolising the Holy Spirit. 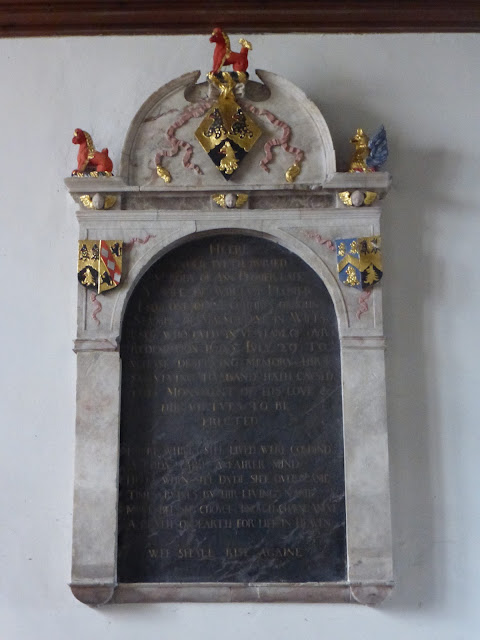 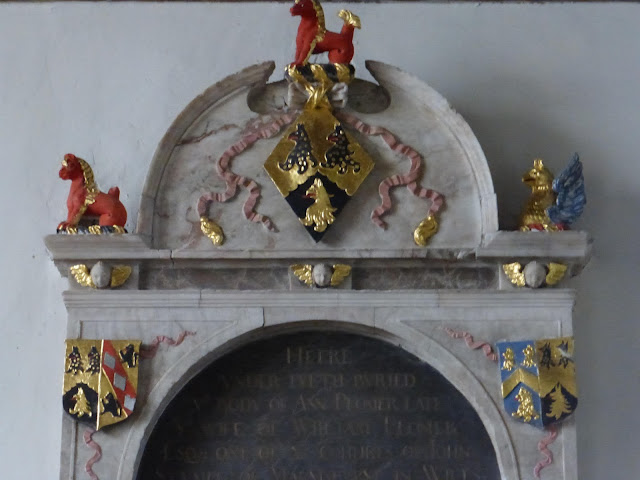 Ann Plomer died in 1625; she has a gryphon and two badly sunburned My Little Ponies on top of her monument. 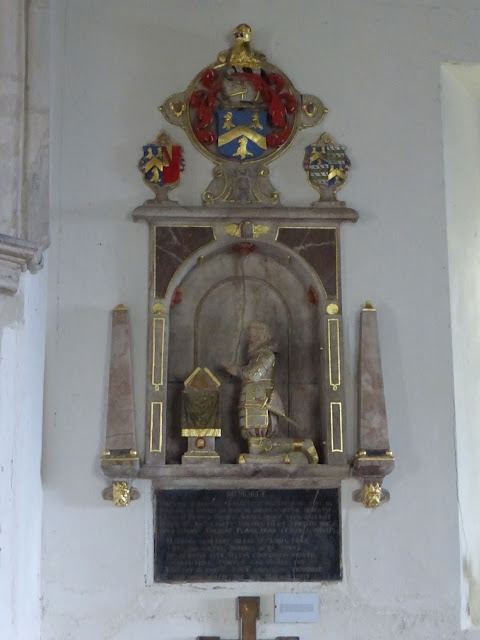 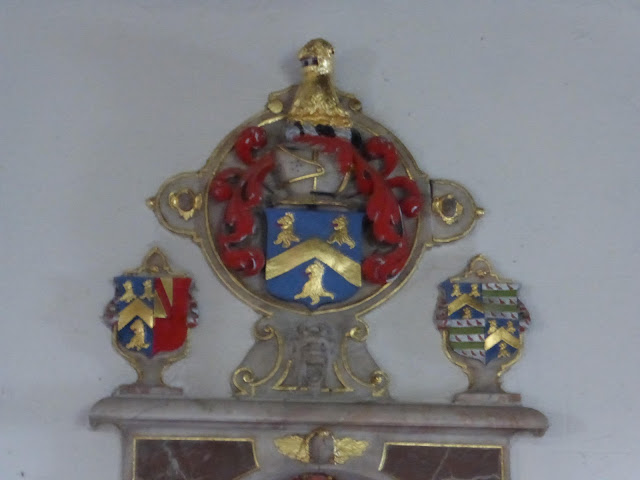 Her husband Sir William Plomer also died in 1625; he's dressed in armour and a helmet is depicted in the roundel at the top, along with more gryphons. 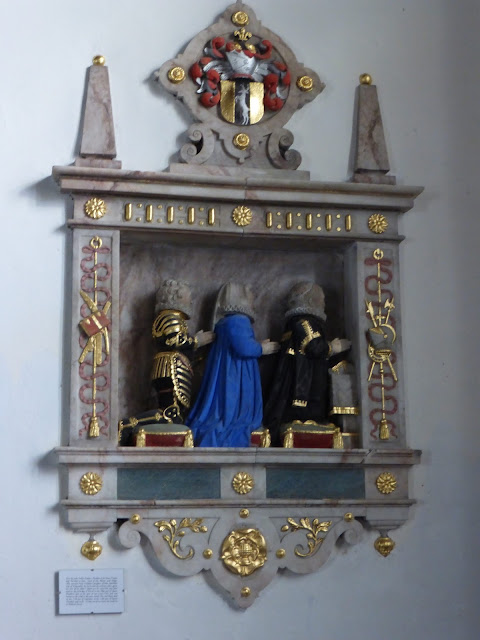 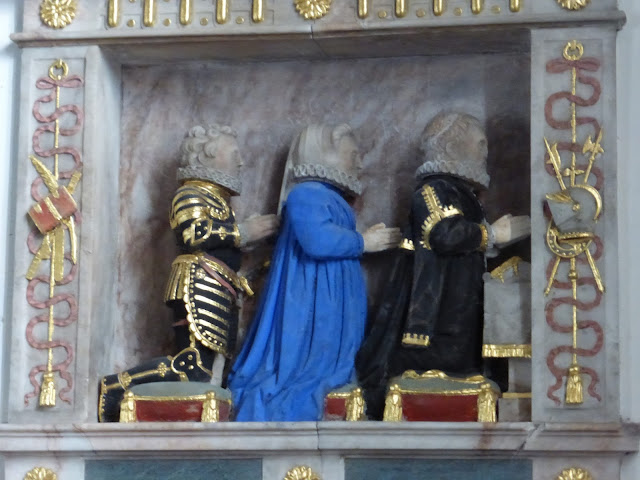 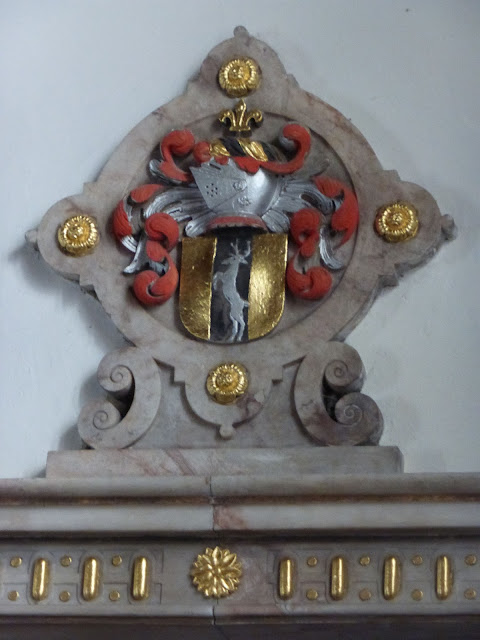 John Parker died in 1595; he is shown in the robes of a lawyer with his wife Mary kneeling behind him, and behind her their son, also John, in armour even more impressive than that of Sir William's. Mary had died in childbirth in 1574, and the younger John must have commissioned this monument to his parents and decided to include himself while he was still alive. His military prowess (or aspirations - I don't know if he had any experience, though it's possible that he fought in the early stages of the Nine Years' War in Ireland) is reflected in the military emblems on the right pilaster, while on the left his father's profession is indicated by a book, quill pen and ruler. 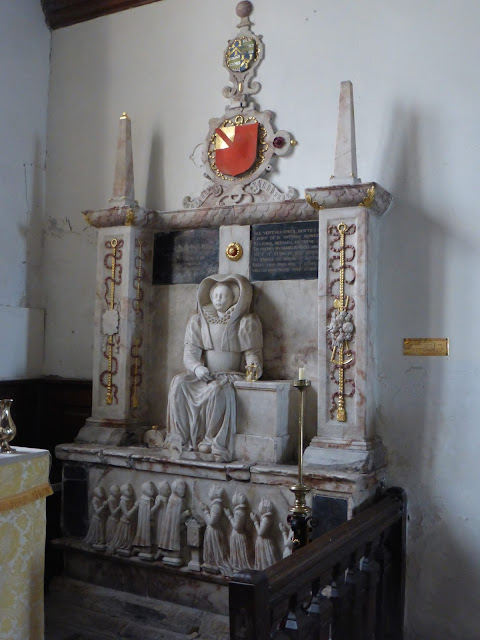 Mary Plomer died in 1605 in childbirth, like Mary Parker (and like Mary Markham in Ardeley church).  She was 30, and was having her eleventh child. Pevsner calls her monument 'the one object in the church deserving a visit', and, while this is harsh on the other objects, it's true that it's much the most eye-catching, even in its current sadly mutilated state. 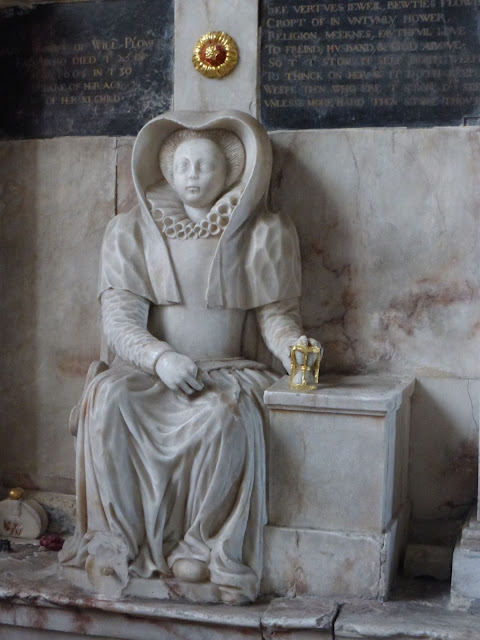 She is seated and impassive, to the point of being expressionless, almost zombie-like. She wears a large ruff, her hair is stiff and her head is enclosed in a huge almost heart-shaped hood, like a helmet from a 1960s science fiction film. She holds an hourglass, an image of mortality, in her left hand. It seems that her right foot rested on a skull, but this has been removed, leaving an awkward stump. 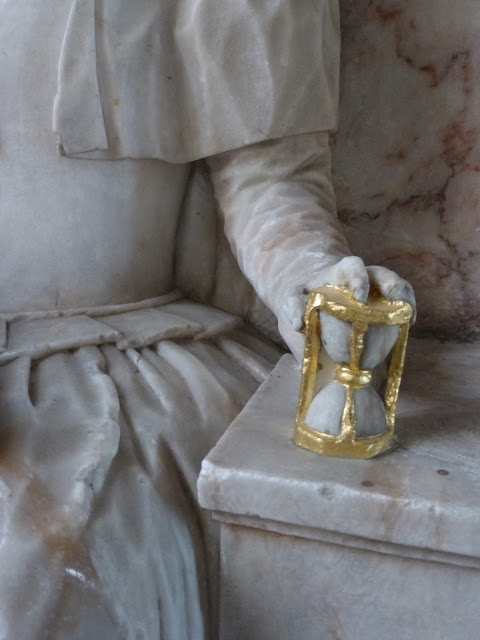 Pevsner says that 'the carving is thoroughly rustic. The creases in the sleeve are still done with the same carving convention as at Chartres about 1150.' I've looked through dozens of pictures of carvings at Chartres, but can't find any that obviously support this claim, so I must be overlooking something. 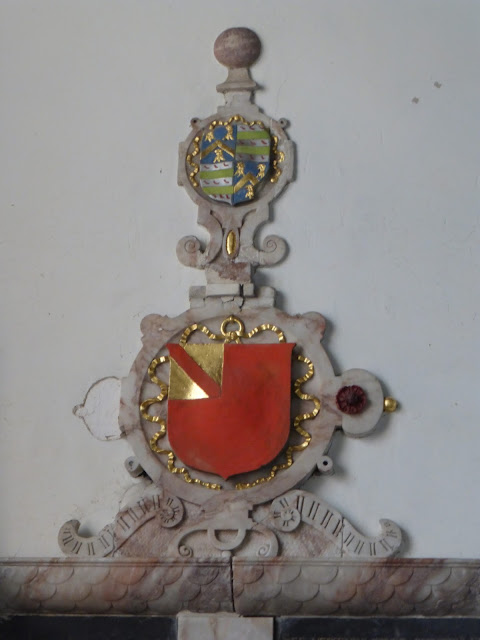 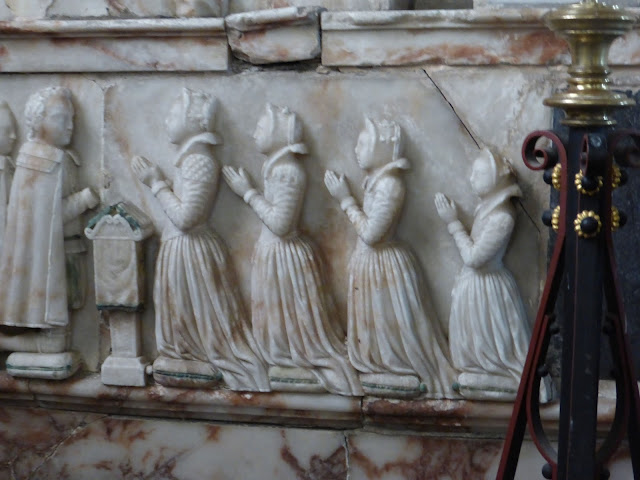 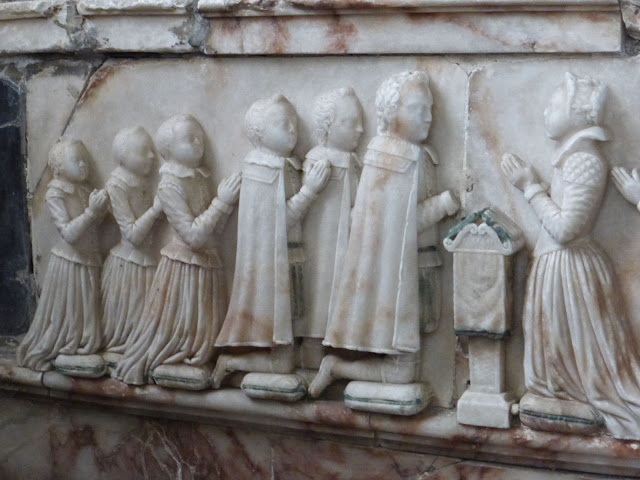 On the plinth are the ten children who survived infancy; however, two of the six sons are shown notionally behind their brothers, which presumably indicates that they predeceased their mother. The three youngest are wearing what we'd call skirts; it was of course common for boys to be thus dressed until the late Georgian era - it was subsequently that skirts came to be seen in the West as exclusively female wear. 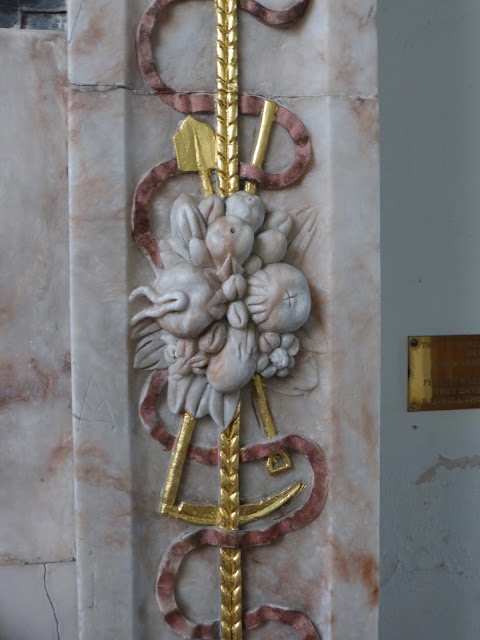 On the right pilaster is this tempting display of fruits, together with a spade and scythe, further images of mortality. 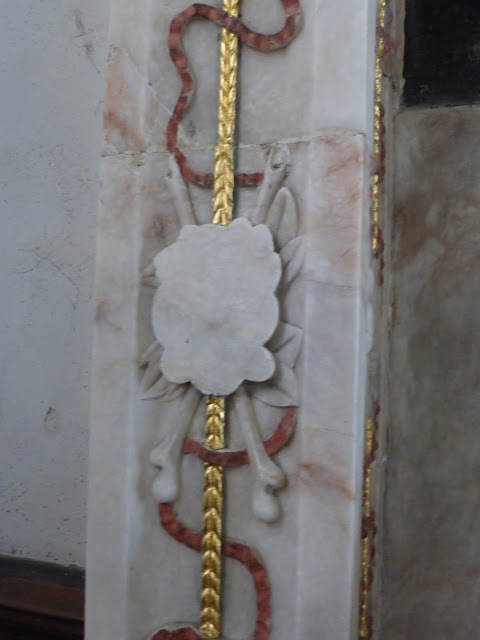 The right pilaster has lost its central motif, but the images of mortality are, rather shockingly, a pair of tibia.  The details on the pilasters  are so similar  to the ones  on the Parker  monument  that  it  seems highly likely that they were made in the same workshop, 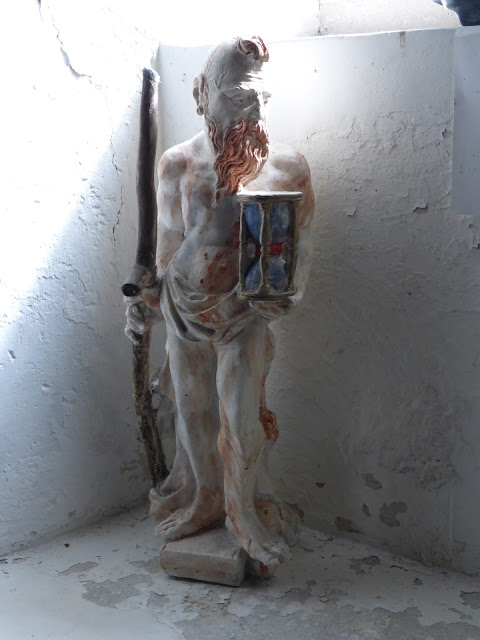 Currently sitting on a window ledge is this forlorn figure of Time, eyes downcast, with his hourglass and scythe. However, it belongs with the Plomer monument; there is an iron spike to the left of the main figure on which he should sit, and he should be reunited with it immediately. Furthermore, two other sculptural items are missing from the monument, as the two photos below (which I took in 1993) show. (The skull on which her foot rests was already gone by then.) 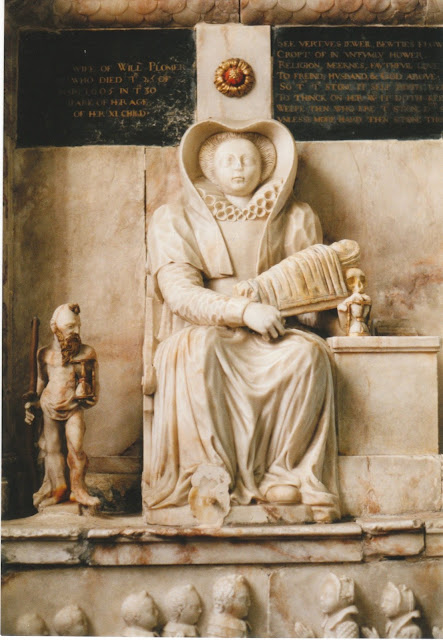 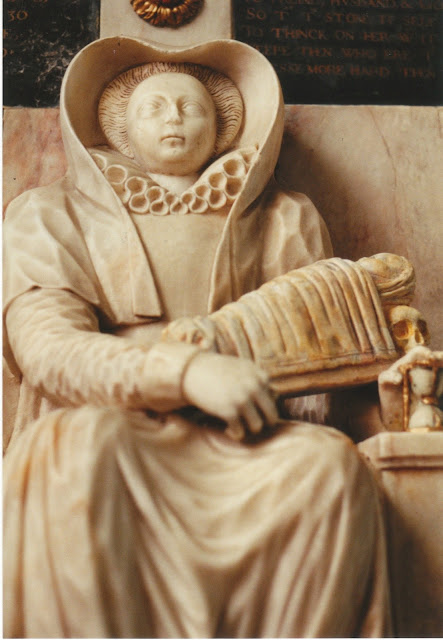 Originally she held a chrisom baby. A chrisom was a baptism robe, which was used as a shroud if the child died before it was a month old. The poor baby here looks as if he or she is strapped to a toboggan and is about to be sent off down the Cresta Run; their head rests on a skull. Baby and skull have either been temporarily removed for conservation or safe-keeping, or stolen. I'm a keen advocate of keeping churches open whenever possible (see here); Radwell is generally open, but even if the sculptures have indeed been stolen I remain keen, though deeply regretful. I have emailed the churchwardens to try to discover the sculptures' whereabouts, but as yet have received no reply. (The figure of Sir William Plomer and a brass were stolen in 2000, but the former was spotted in a sale at Sotheby's, having had its colouring removed in an attempt to conceal its origin, and returned the following year. The brass has also been returned.)

The last four lines of the poem which forms part of Mary Plomer's epitaph read (with modernised spelling):

So that the stone itself doth weep
To think on her which it doth keep;
Weep then, who e'er this stone doth see,
Unless more hard than stone thou be.

And it's true that if you pause to reflect you can't fail to be moved by the fate of Mary and her child. More happily, it's also true that you'd need a heart of stone not to be charmed by Radwell and its church.

Posted by David Gouldstone at 07:21