Most cultures celebrate the New Year in the spring or autumn. For example, Nowruz, the Iranian New Year, is usually on March 20 or 21, and Ugadi, New Year's Day for the Deccan region of India, generally falls in March or April. Rosh Hashanah, the Jewish New Year, is most often in the early autumn, while Gujaratis celebrate Bestu Varas in October or November.

Why, then, do Western cultures, and cultures influenced by the West, celebrate it on January 1, and why am I wishing you a Happy New Year today, March 25?

As the earth doesn't pass a marker post on its journey round the sun, any date that's chosen as marking the new year is bound to be questionable and random, but some dates are more questionable and random than others. The most questionable and random of all is January 1. What happens in nature on that date? Absolutely nothing. It's just the middle of winter, and not even the exact middle (which would make some sort of sense), merely an insignificant day in the earlyish part of that season. (Throughout this post I am writing from the perspective of the northern hemisphere; apologies to any readers below the equator.)

The Romans were the first people to make January 1 New Year's Day, in 153 BCE. (Previously, until 222 BCE, it had been May 1, and the Ides of March (March 15) after that.) Quite why they did this remains obscure, at least to me. Professor Wikipedia explains that this was the date on which the Senate was convened, and when civic officials took up their posts, but that doesn't explain why January 1 was chosen for these events. I once read somewhere that the new year was the beginning of the military campaigning season, so, as the Empire expanded and troops had further to go before reaching the areas where they were to be operational in the spring, the date of the new year had to be put back to give them more travel time. This sounds vaguely plausible, but I don't know if it's true.

As I implied in the opening paragraph, most cultures chose times around the equinoxes, when the major seasonal changes occur, as their new years. Early cultures must have watched the turning of the seasons far more attentively and anxiously than we do now. Everyone knows that Stonehenge is aligned on the summer solstice sunrise, but less widely known is the alignment with the winter solstice sunrise. This must have been a key event in the lives of the people then. It's easy to imagine that they observed the shortening days nervously, fearing that if they displeased the gods (or however they imagined the forces governing nature) the nights would go on getting longer and longer until there was no daylight at all. The solstice must have been joyously celebrated, as they knew (or at least hoped) that at last the light would start to overtake the dark. It's possible, even likely, that this was their new year, and this seems to me to be a thoroughly suitable date to chose, though as far as I know no existing cultures have adopted it.

After the fall of the Roman Empire in the west, conventions considered to be pagan were abandoned and Christian ones invented. The Second Council of Tours in 567 decreed, entirely sensibly in my view, that January 1 was not the beginning of the year. Unfortunately, they seem to have failed to rule definitively on when exactly the year did start. Throughout the Middle Ages (and well into the Early Modern period) the new year was variously observed in different places in Europe as Christmas Day, March 1, March 25, and Easter. Christmas Day makes some sense, as it's near the solstice, March 25 is near the equinox, and Easter is sometimes near it too, and at any rate is always in spring. (It's obviously symbolic that the Resurrection is celebrated when nature is reborn.) Where March 1 comes from I'm not sure, but it too is in spring.

Why did they choose dates near rather than on the solstice and equinox? The answer to this is that they did choose exact rather than approximate dates. The Julian calendar had been instituted in the 1st century BCE, and by the 6th century CE the dates were already significantly out of synch with the seasons. So by 567 the spring equinox occurred on March 25.

March 25 seems to have been the most commonly accepted date for New Year's Day, at least in the British Isles. This explains, incidentally, the date of Christmas, which some find puzzling. It's symbolically satisfying that Mary was visited by the Angel Gabriel and impregnated by the Holy Spirit on the first day of the year, and March 25 is still celebrated by Christians as the Feast of the Annunciation (also known as Lady Day). As the human gestation period is nine months it naturally follows that Jesus was born on December 25. 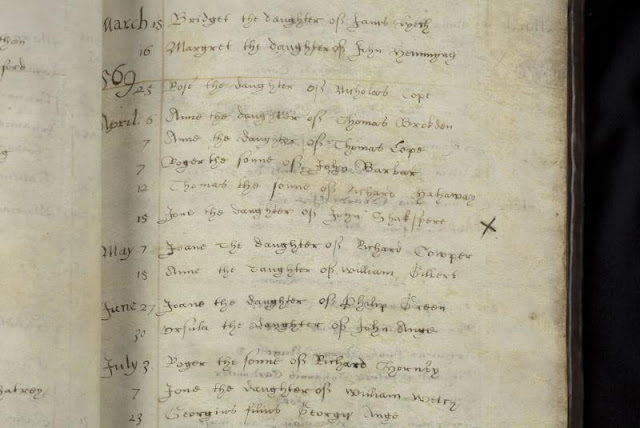 For more than a thousand years Christendom celebrated the new year in spring, not January. Some find this very difficult to accept, but the picture above provides visual proof. It shows a page from the baptismal records of Stratford-on-Avon parish church (the cross marks the entry recording the baptism of Shakespeare's sister, Joan, on April 15, 1569). You can see that the dates before March 25 are reckoned to be in the previous year.*

When the Gregorian calendar (a necessary and welcome reform) was introduced to most of the Catholic world in 1582, it was decided that the year would revert to beginning on January 1. This is a mysterious decision; a date in spring could easily have been retained, and the world would be better-ordered now had Pope Gregory XIII done so. If it was thought that it was confusing to begin the year in the middle of a month, March 1 (which was already New Year's Day in some people's estimation) would have been a sensible compromise. Or, more radically, as the calendar was undergoing a major overhaul anyway, it could have been adjusted a little more so that the spring equinox was on March 1. Whether these possibilities were considered I don't know. But presumably Renaissance humanism had made classical culture something that even the Church wanted to imitate, and so the Roman date for the new year was adopted, condemning the world to a simply daft convention.

The date of the new year didn't officially change in Britain until the abandonment of the old Julian calendar and the adoption of the Gregorian calendar, which happened as late as 1752. (England, along with some other Protestant countries, had previously refused to accept it, as it was seen as Popish.) However, well before then many or even most people accepted January 1 as the de facto beginning of the year. It's clear from Pepys' diary (written in the 1660s), for example, that he acknowledged this, but I'm not sure why.

If the year begins on March 25, then the reason for the otherwise seemingly bafflingly random beginning of the UK tax year, April 6, becomes clear. In Britain in 1752 eleven days had to be dropped from the calendar; people went to bed on September 2 and woke up on September 14. (Some were unhappy at this change, but the stories about riots provoked by it seem to be untrue.) However, the Treasury wanted the year to remain 365 days long so they extended the tax year, previously beginning on March 25, by eleven days. So for the rest of the century the tax year began on April 5. 1800 would have been a leap year in the Julian calendar but wasn't in the Gregorian, so once again the Treasury added an extra day. Since then the British tax year has started on April 6, which is just the kind of wonderfully logical illogicality that I love.

Spring - this is so obvious that it shouldn't need saying, yet it's ignored by everyone who persists in accepting January 1 as New Year's Day - is the beginning of the year. In mid-winter nature is dead, or at least dormant; nothing is being renewed or reborn. Spring is when life restarts. Daffodils spark into bloom, birds are chirpily flirty, tractors arduously plough the fields, farmers expectantly plant seeds, lambs and calves struggle onto wobbly legs, hibernating animals woozily wake up, the days get warmer and evenings at last begin to get lighter and we begin to consider the possibility of sitting outside. Exactly when spring begins is a matter of dispute, but whenever it does, that's New Year's Day. You can make a very good case for New Year's Day being on the spring equinox (March 20 in 2016), but I prefer the traditional time-honoured date of March 25. It was good enough for a millennium and more, and it's good enough for me.


* If the year begins in March, then the names of the months September, October, November and December (meaning the seventh, eighth, ninth and tenth months, respectively) make sense.

** Disappointingly, this turns out to be not exactly true. Most reference books state that this is when Cervantes died, but recent research has established that he died on the 22, and was buried on the 23.

Posted by David Gouldstone at 07:40