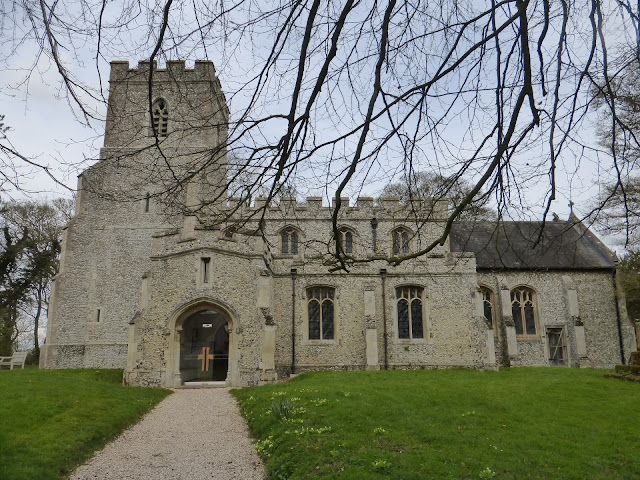 Kelshall is the ninth Herts church I've written about since the lockdown began. Perhaps I should have been using the enforced time at home to write about what I consider to be the county's most important and noteworthy churches; after all, of my Ten Best Herts Churches I've so far covered only seven (and only four of my tentative next ten). However, I notice that during this time I've described only one major church (Wheathampstead); the other seven are what I hope I can call without offending anyone minor churches (though if this blog has a recurring theme, it is that it's possible to find plenty to enjoy almost anywhere if you're prepared to look for it): Hertingfordbury, Therfield, High Wych, Bygrave, St Ippolyts, Hinxworth and Preston.

This concentration on the minor has not been a deliberate policy. I think it's happened because writing about a lot of major churches would somehow amount to an admission that the current circumstances are going to continue for a long time. I don't want to sound too precious about it, as I write this blog because I enjoy doing so (it's an entirely self-imposed task), but writing about somewhere such as, for example, Ayot St Lawrence, is a big commitment. It takes time and effort to do the research, collate the pictures, ponder what I'm going to say and finally write several thousand, hopefully not too dull, words. It would seem that the lockdown is almost designed to facilitate this sort of endeavour, which is I think why I've largely refused to go down that road. Instead, I've written mostly about churches that would not be expected to feature on anyone's 'best of' list, as by doing so I can try to persuade myself that the way things are is only temporary, so there's no need for or point in my trying to use this time sensibly.

This makes little sense to me, so I imagine it makes even less to you, dear reader. Anyway, here's what I've got to say about another 'minor' church.

Kelshall is only four miles from Royston, but its church feels happily aloof from the hurly-burly, sitting among trees, by a farm and at the end of a road that, once it's reached its destination, decides to go no further. The church is a complete early 15th century Perpendicular building (restored in 1868-70*). There seems to be no evidence of an earlier structure; presumably before then worshippers had to walk the short distance to Therfield. It's a handsome sight outside, all embattled (except the chancel), and inside stately, full of light with tall arcades, the piers slim and graceful, and a good-sized clerestory. 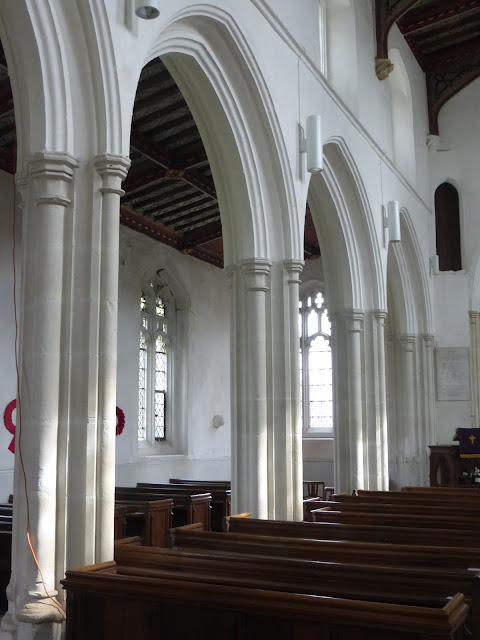 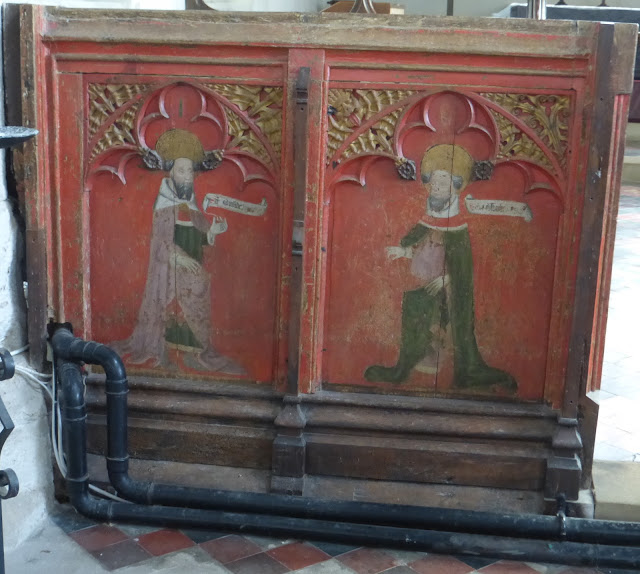 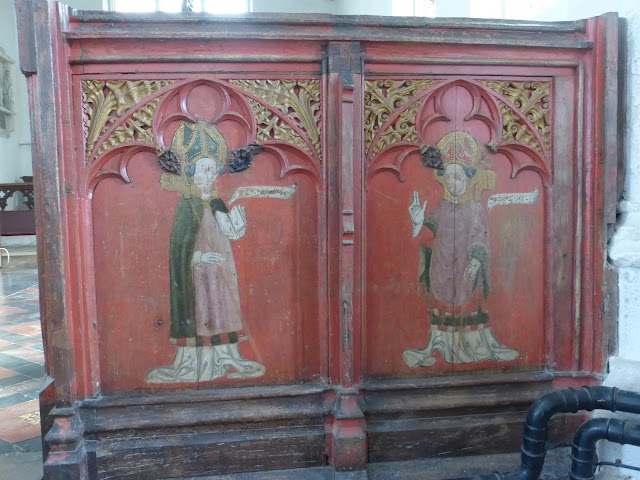 A rarity for the county: a painted screen (contemporary with the church, that is early 15th century). Only the dado survives; originally it would have been more than twice as tall. On the left are Sts Edmund and Edward the Confessor, and on the right two bishops. It's of little artistic merit, but seems to be unrestored, the colours original - a rich red background, green and purple robes, gold halos. 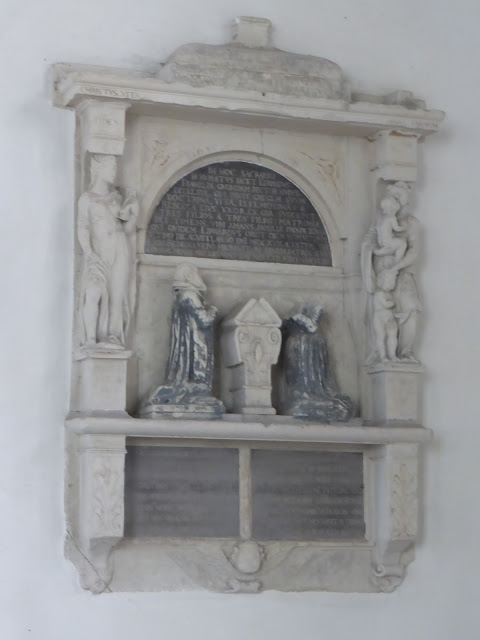 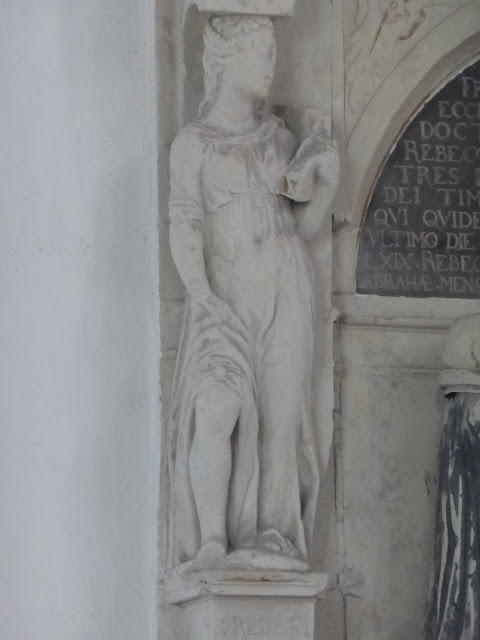 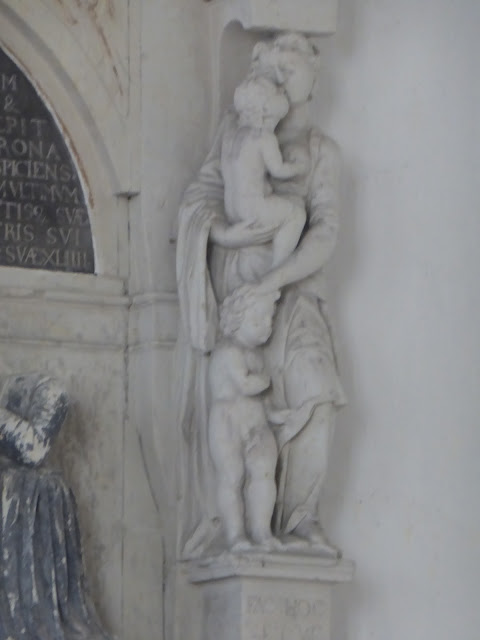 In the chancel is a touching monument to the rector Edward Franklin (d.1617) and his wife Rebecca. The inscription describes them as 'a payre of turtles [ie turtle doves] (whome Gods dove [ie the Holy Spirit] together joynd in wedlock love).' Caryatids stand on either side, Faith on the left and Charity on the right; the latter holds a young child very affectionately in her right arm and soothingly pats a toddler's head with her left. 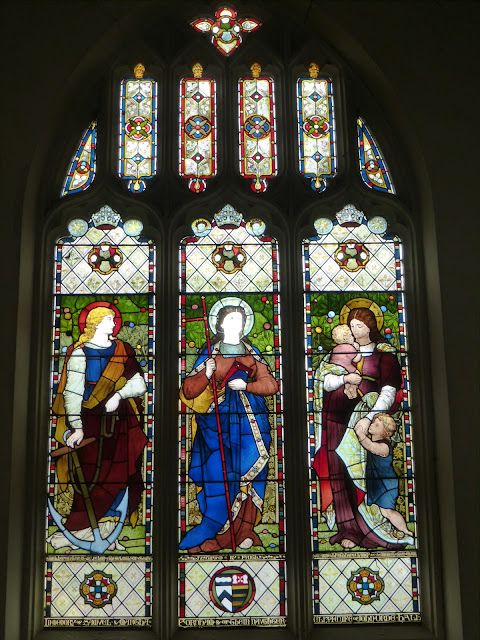 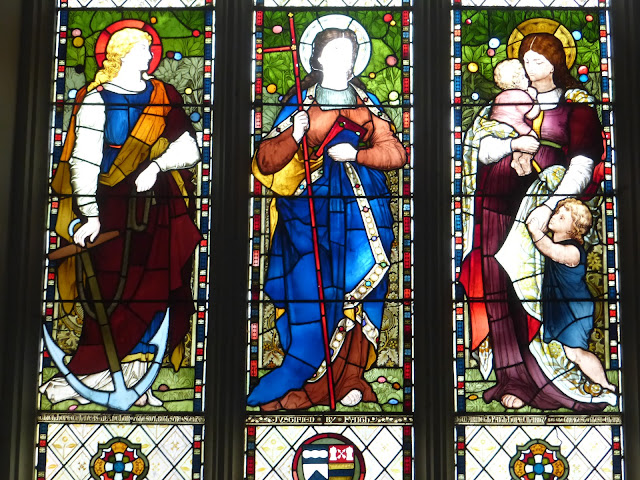 The 1870 east window, depicting Faith (with an anchor), Hope (with a cross) and Charity (in a very similar pose to that on the Franklin monument) is by Heaton, Butler and Bayne at their most Pre-Raphaelite. The foliage in the backgrounds is especially gorgeous. 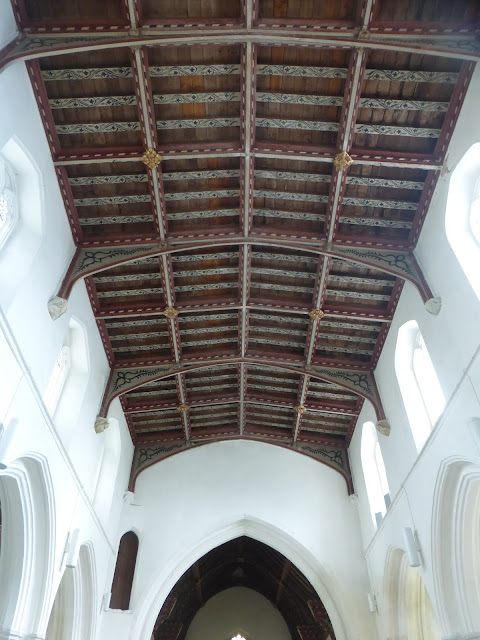 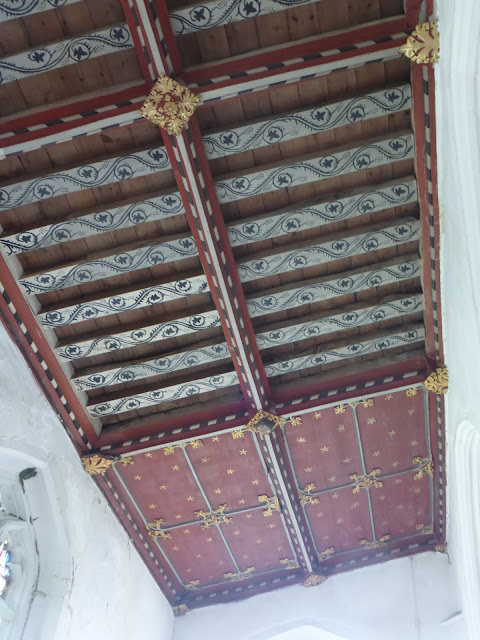 The nave and aisle roofs are original, at least in part, and have been repainted, apparently following the original decorative scheme so far as it can be determined; the result is, obviously, so much more ornamental than plain wood. The east end of the north aisle has a ceilure to honour the altar that would have stood there. 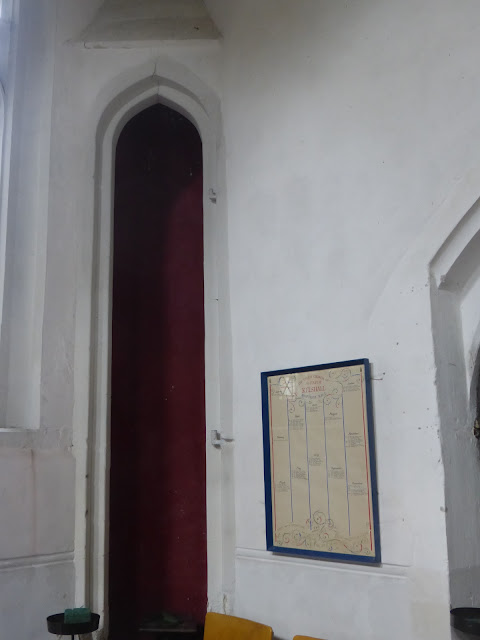 At the west end of the north aisle is another rarity, a very tall, very slim cupboard. This is what's usually called a banner stave locker, and was very probably used for storing processional banners on their long poles. 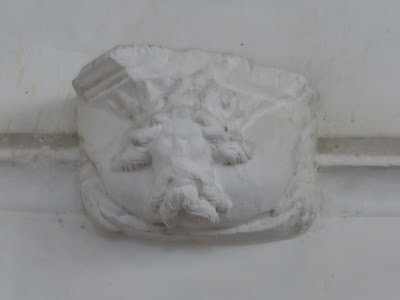 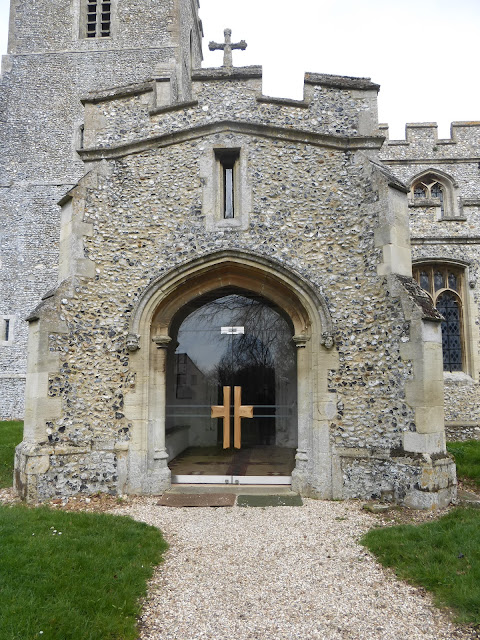 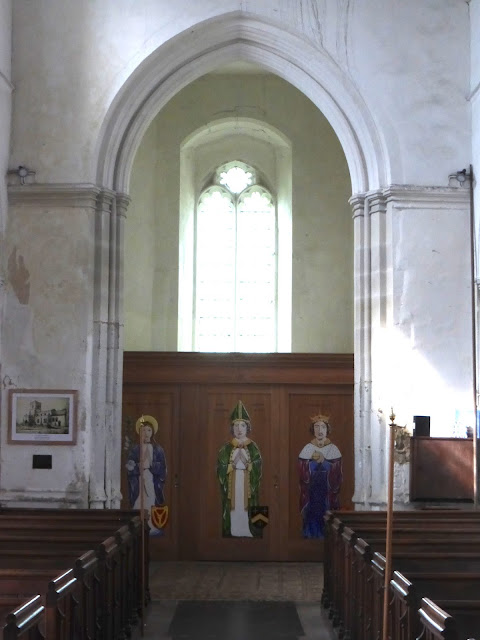 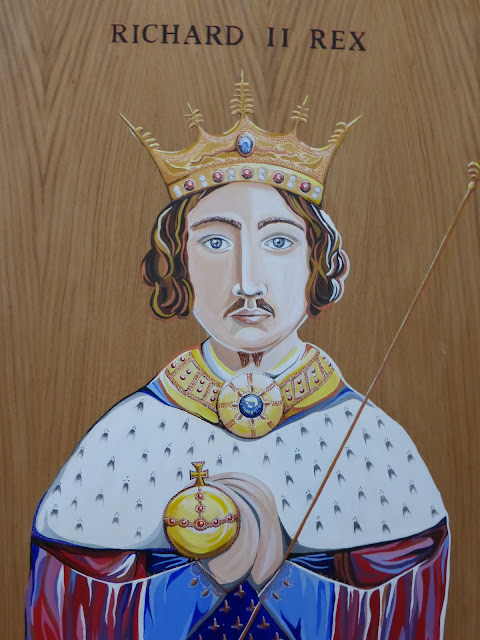 Despite the tiny population of the village, the church is evidently well-loved and cared for. Recent additions have been the glass outer doors to the south porch, and a painted wooden screen under the tower. Also notable are the extremely tactful light fittings in the nave; churches so often make  a mess of this, but Kelshall has got it just right.

The church has been open when I've visited.

* By Nash and Son, about whom I can't find any information. Possibly they were Edwin Nash (1814-84), who had worked in the office of Sir George Gilbert Scott, and Walter Hilton Nash (1850-1927), who were based in London. 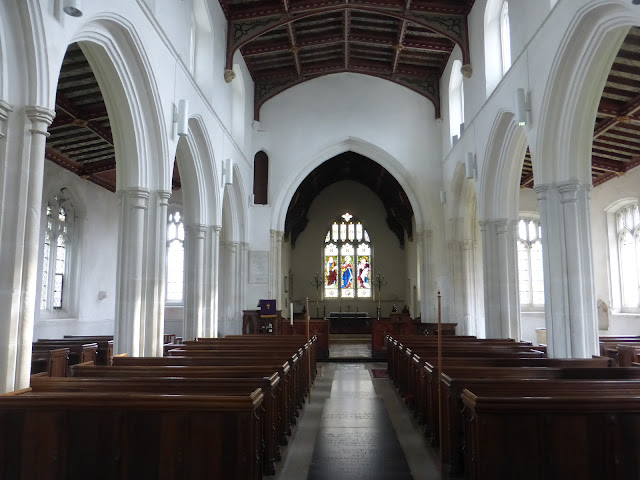 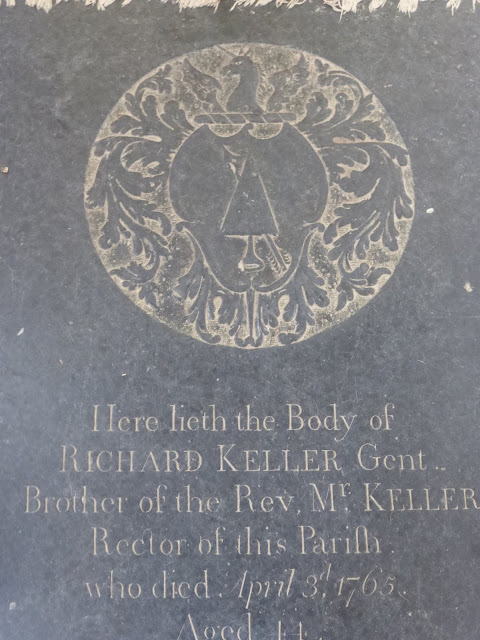 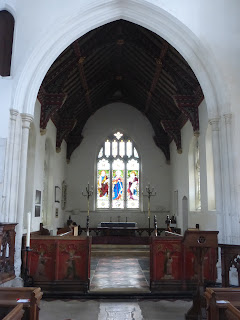 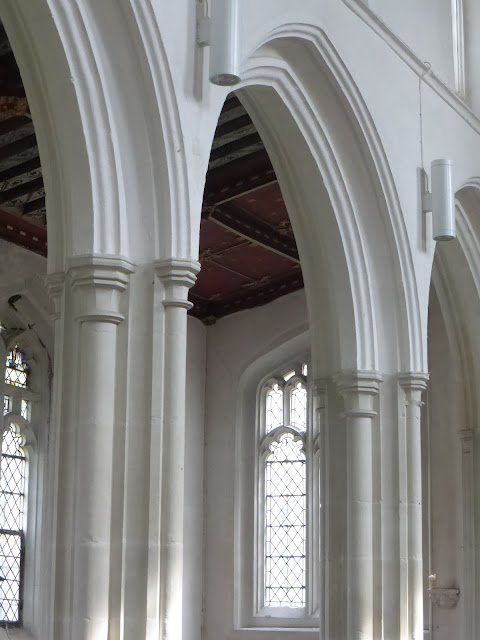 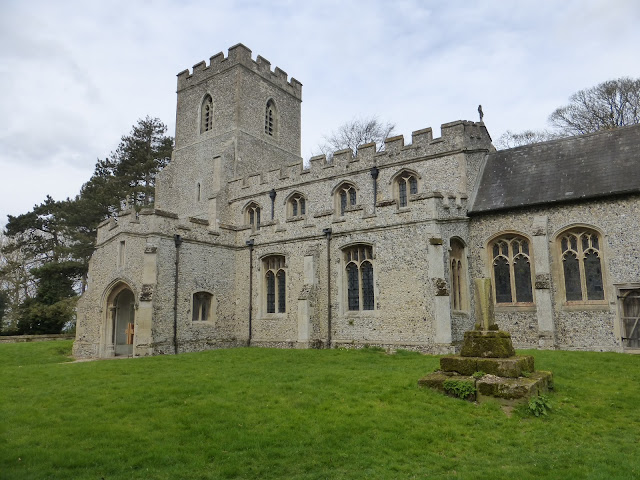 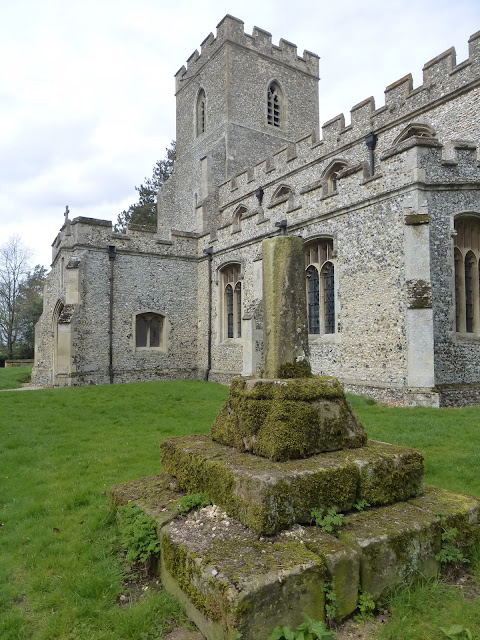 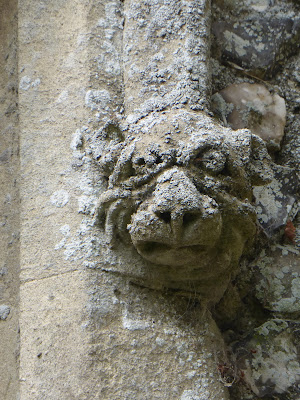 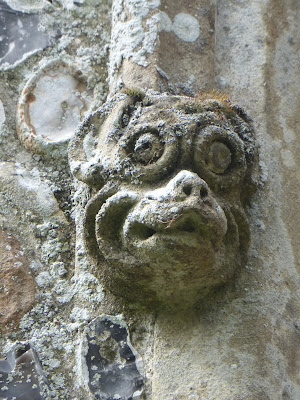 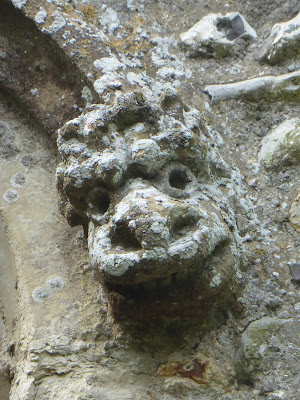 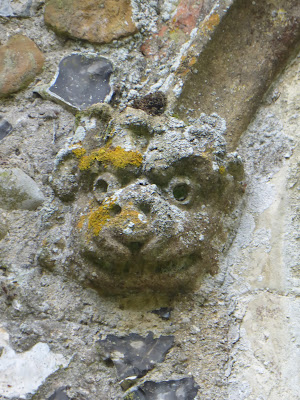 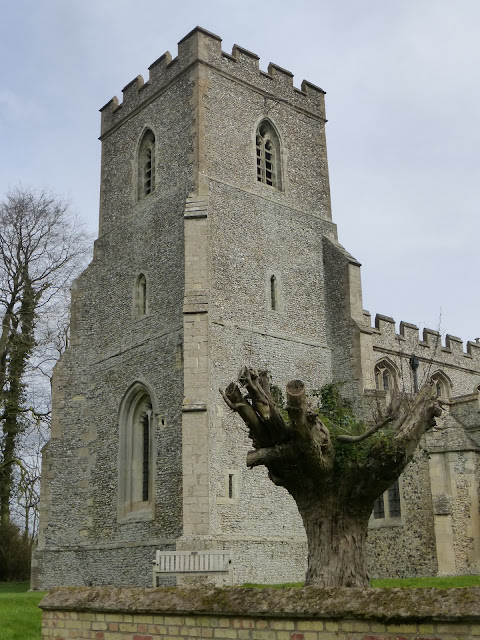 Posted by David Gouldstone at 16:47