This part one of two. Part one discusses the architecture, part two the furnishings; it can be read here. 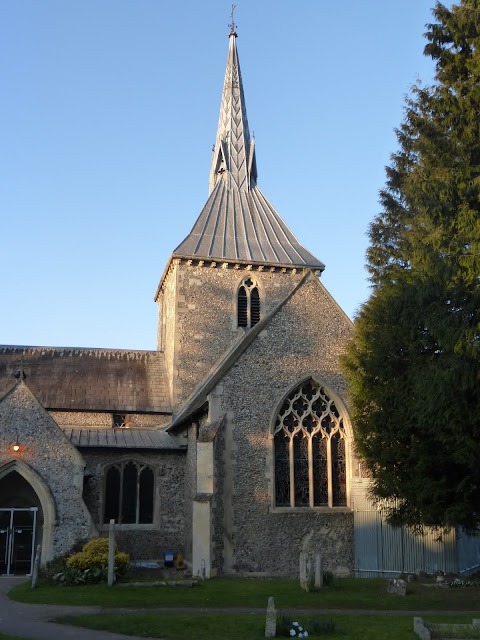 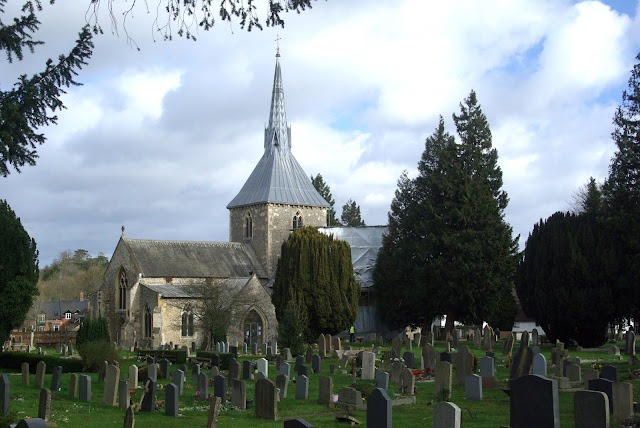 The most prominent feature of Wheathampstead church is the extraordinary spire (second in visual impact in the county only to Hemel Hempstead's). It is inevitably, almost compulsorily, compared to a witch's hat; or we might say that it's a steampunk rocket, poised on its launchpad. It begins at its base as a pyramidal roof, changes pitch slightly about a quarter of the way up and then, near the peak, suddenly becomes a small spire, with lucarnes (small gabled windows) in the angles.(1) There's nothing like it elsewhere in Hertfordshire, and there can't be many in the country as a whole.(2) 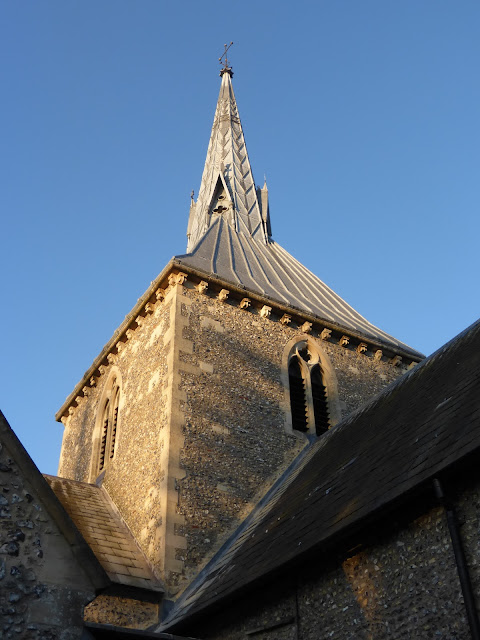 However, the steeple has looked like this only since the restoration of the church in 1865-6 (by Edward Browning of Stamford (1816-82)). Before then there was a parapet at the base of the roof, and the spire, which was much stumpier, sat on a square platform at the top, which seems to have had its own smaller parapet. How old this arrangement was is unknown (but it was presumably post-medieval). Browning's intention was to restore the steeple to its medieval proportions, but my guess is that he relied on his imagination at least as much as concrete evidence as to its original appearance, making it purely Victorian. He did a great job, giving the town and the county something quite out of the ordinary. 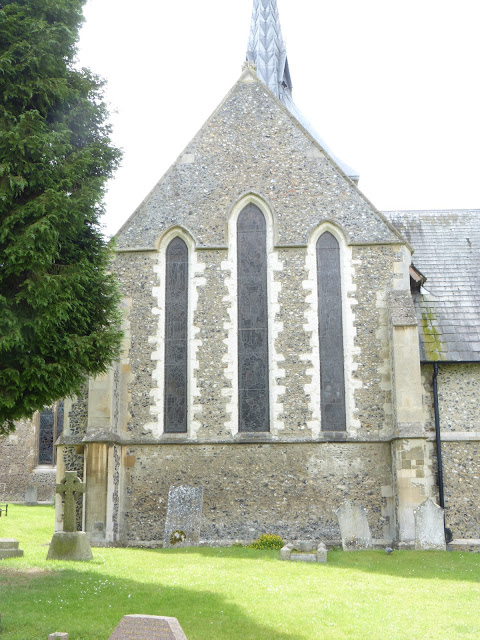 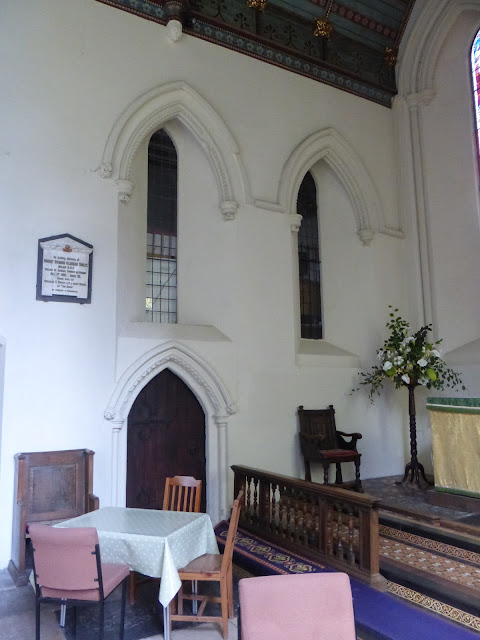 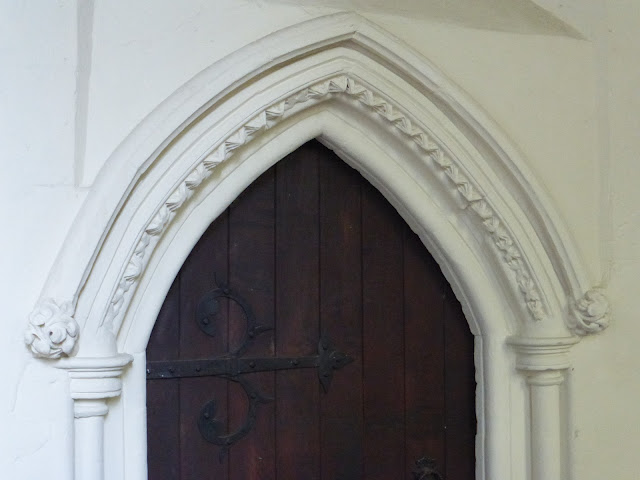 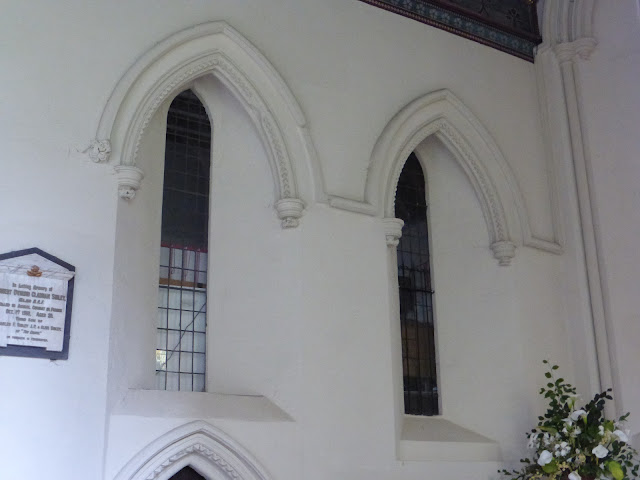 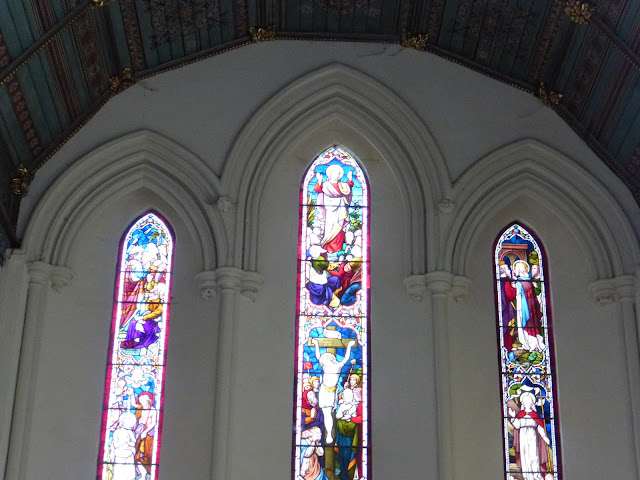 The church has Saxon origins; burials of that date have been discovered, and if you look carefully you'll find some architectural fossils in the walls of the south transept. It must have been a major structure, not much smaller than the present building. Originally the chancel was apsidal (that is, terminated in a semi-circle), but it was entirely reconstructed c.1230 on a larger scale and in the Early English style (the most immediately obvious feature of which is tall, thin, sharply pointed windows, known as lancets). This can be seen to good effect in the north wall, where there are two windows and a door, all with the characteristic dogtooth ornament in their arches. Even better is the stepped (that is, the middle one is larger) triplet of windows in the east wall, with tall, slim shafts carrying complex mouldings. This was the first stage in series of building campaigns, spread over the next century and a bit, that created the large, very handsome building we see today. 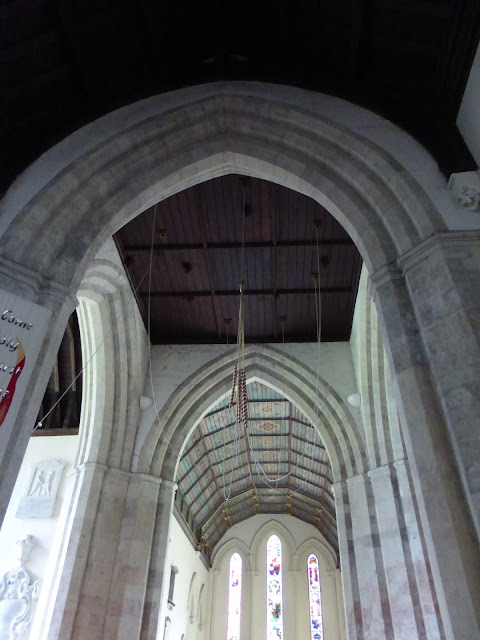 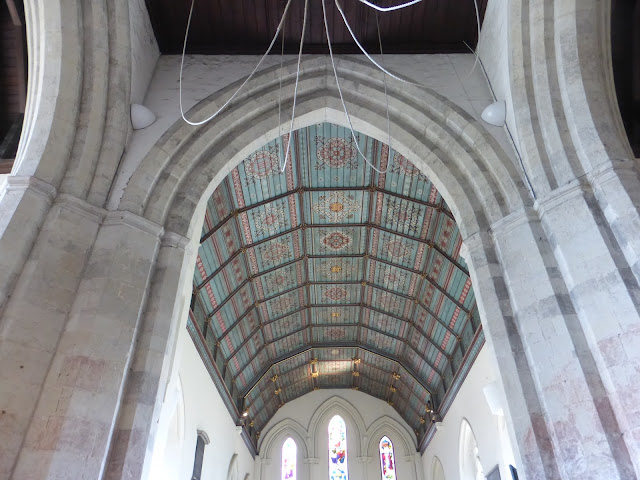 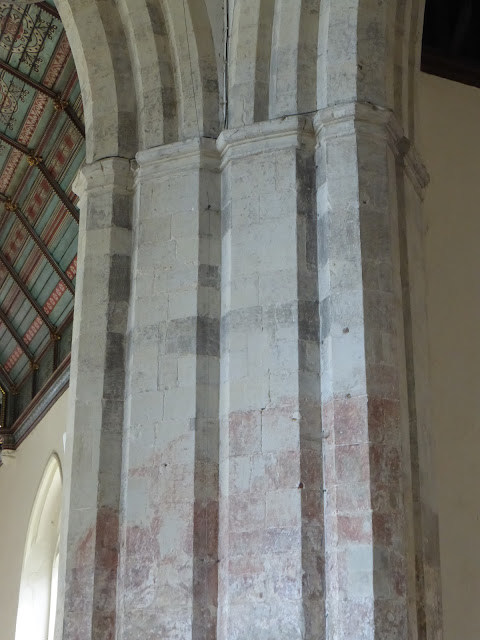 About half a century later work started on the crossing and tower. I really like cruciform churches; they're an awkward shape for modern services as the congregation in the nave is so far from the chancel, but it is a wonderful thing to stand under a central tower and be able to look in every direction, including up, and have changing, exciting vistas unfold in front of you. (3) Wheathampstead's crossing arches are lofty, sturdy and impressive, though not elaborately decorated (they have very plain capitals, for example); they and the tower they support were partly paid for by people eager to escape some of the punishments due to them when they reached Purgatory. In 1290 the Bishop of Lincoln granted indulgences of twenty days (4) to all who contributed money towards the project (maybe they'd been slow in coughing up previously and needed a little encouragement); in other words, he declared that they'd reach Heaven nearly three weeks early if they dipped into their pockets. I don't know if it worked for them, but the earthly result - the crossing - certainly works for me.

However, good though this all undoubtedly is, it's the next stage of the building work that excites me most. Decorated Gothic architecture, from the first half of the 14th century, is my favourite style, and in Hertfordshire Wheathampstead is one of the three or four best places to see it. True, there's not much in the way of elaborate carving inside, but the originality of the curvilinear tracery and the number of the Dec windows more than makes up for this.


The westernmost window on the south side of the chancel (on the left in the picture above) has three ogee-headed lights; the middle one, which is slightly shorter than the others, has a supermullion springing from its apex, which together with a supertransom (5) forms a cross, which in turn frames cinquefoils. This is a style known as petal tracery (because, obviously, it looks a little like the petals of a flower).(6)

To the right of this window is one with two lights, not ogee-headed this time, under a depressed round arch. On this arch sits a quatrefoil. This seems to me a slightly clumsy design compared to its neighbour. But the designer ran out of inspiration altogether by the time he came to the next window (on the right in the photo), as it is, unlike the others, entirely standard. (To be fair, it looks later, and was probably designed by someone else altogether.) 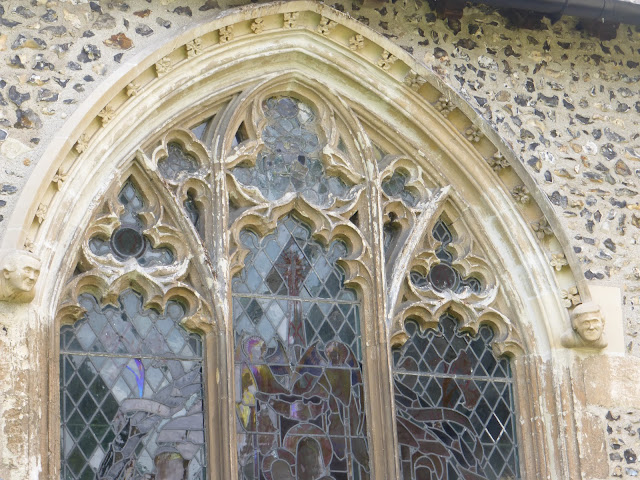 The east window of the south transept has a form of Kentish tracery, in other words most of the cusps are doubled. 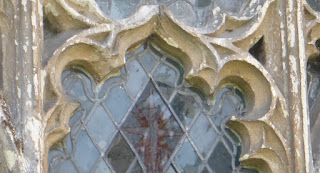 Above you can see the four downward or inward pointing triangular shapes, the cusps. Each cusp splits into two separate points, an unusual design feature to find in Herts.

The central light is ogee-headed and above it is a kind of trefoil, the lower lobes of which are pointed rather than rounded, an original rather than beautiful design. Whoever designed this window wasn't content to leave it there; the voussoirs of the arch are decorated with delicate little fleurons. 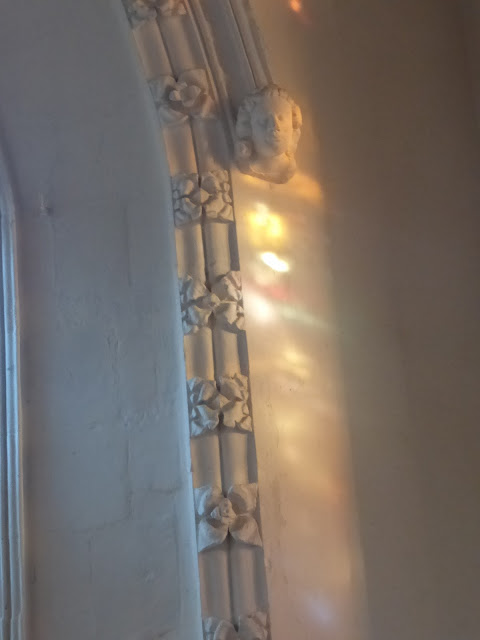 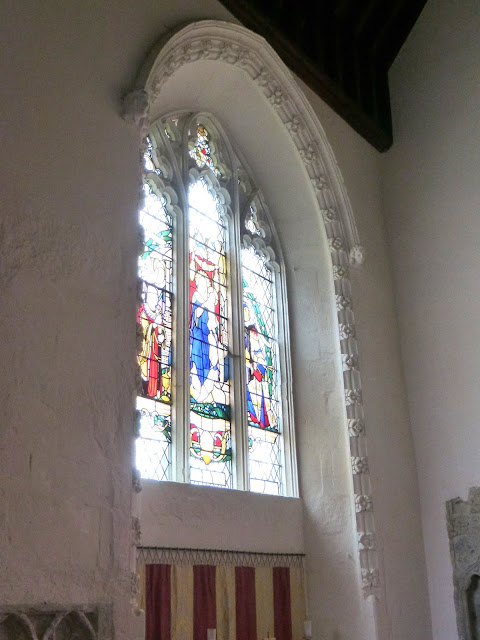 What's more, these fleurons are also found inside, where they also continue down the jambs. 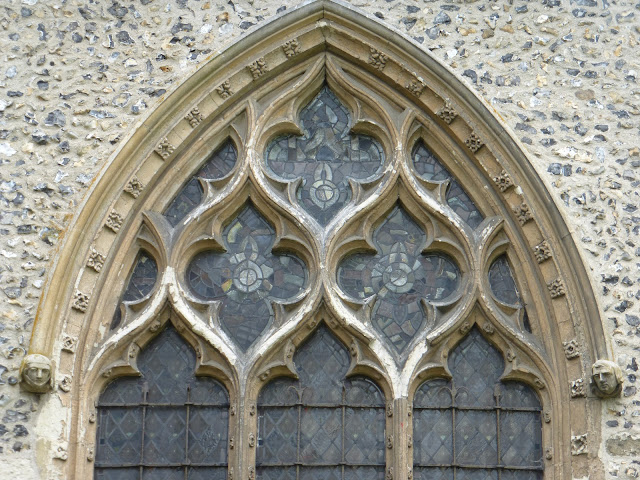 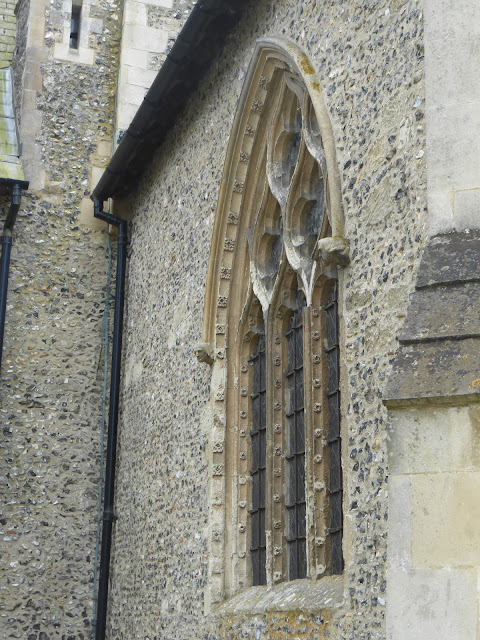 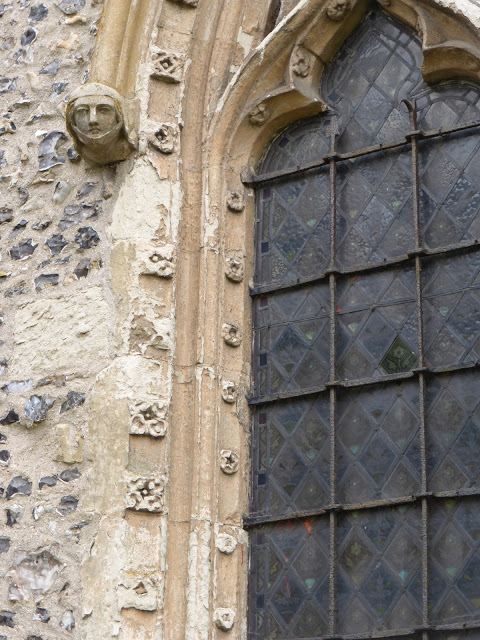 The east window of the north transept has simple reticulated tracery, like that of a thousand contemporary windows, but goes one better than the corresponding window in the other transept by having fleurons in the arch and on the jambs, and also on the mullions. 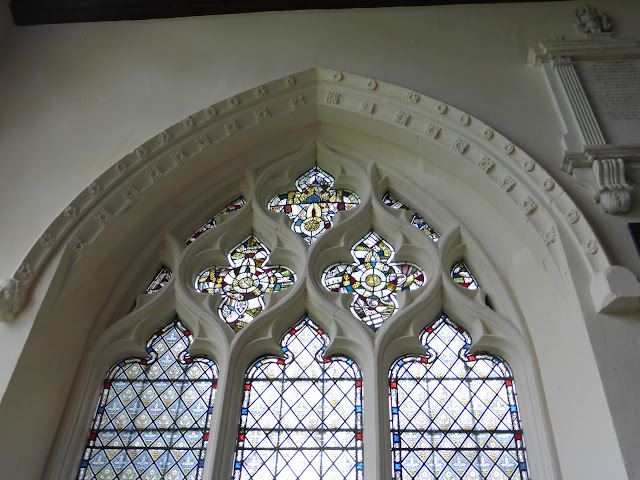 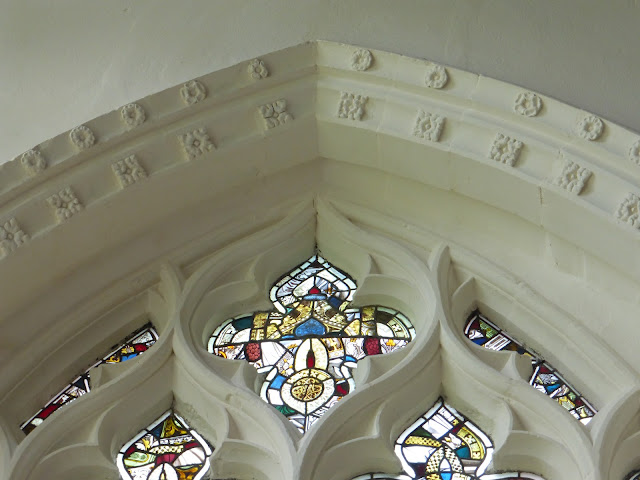 Inside there are two bands of fleurons. 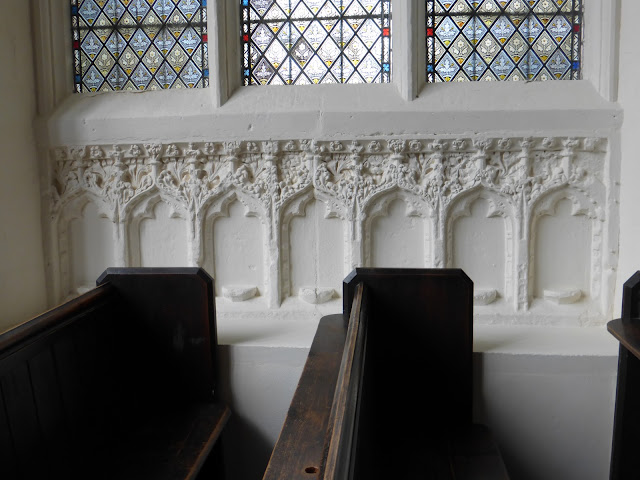 Beneath the window is a reredos consisting of seven shallow niches, in which statues once stood, the crockets of which are extraordinarily richly carved. 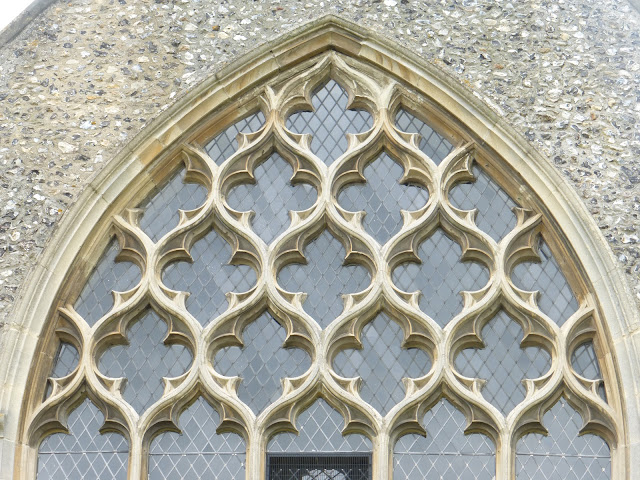 One disappointment is that the two largest windows, those on the north and south of their respective transepts, are in the standard reticulated pattern. I wonder why, while most of the windows show such originality and variety in their design, these two are neither original nor varied.


The west door also has two bands of decoration in the voussoirs. The designer was clearly determined to say it with fleurons. All this exuberant decorative work is a delight; it must have been expensive too, though unfortunately we don't know for sure how it was financed.

Having covered the key points of the architecture in this post, in part two I shall deal with the church's contents, which are good enough do their surroundings proud.

(1) It's not a broach spire, despite what the church guidebook says. The clue is the absence of broaches (demi-pyramids in the angles at the base of the spire).

(2) Banstead, Surrey, is somewhat similar, but is shingled and so looks rural and domestic, whereas the lead of Wheathampstead's steeple appears more industrial.

(3) The other cruciform parish churches with central towers in Hertfordshire are Anstey, Berkhampstead, Hemel Hempstead, Pirton, St Albans (St Peter) and Weston. The king of the county's crossings is of course in St Albans cathedral.

(4) At first sight twenty days seems a slightly peculiar stretch of time with which to measure such things. Why not, say, a fortnight, or three weeks, or a month? I'm no expert in the niceties of medieval theology, but I suspect that twenty was chosen as it's half of forty. Forty is an important number in Christianity: Moses, Elijah and Christ fasted for forty days, hence Lent lasts for forty days, there are forty days between Christmas and Candlemas, and between Easter and the Feast of the Ascension. A 'quarantine' was a period of forty days (the word is of course closely related to the Italian for forty, 'quaranta'). I assume that major indulgences were often granted in multiples of quarantines, and minor ones, such as donating a few shillings to the building of a church, were more likely to be doled out in fractions of that number. So an indulgence of twenty days was a demi-quarantine.

(6) There's another example of this in Sutton, Cambs, at the end of the south aisle. When the current crisis is over I shall make a trip to see for myself. 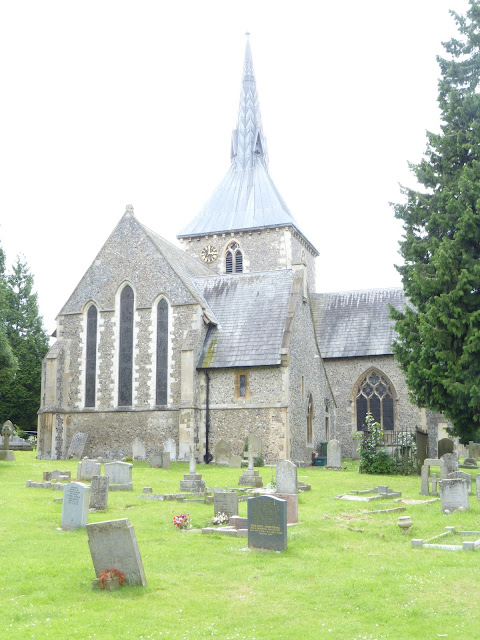 Posted by David Gouldstone at 18:07