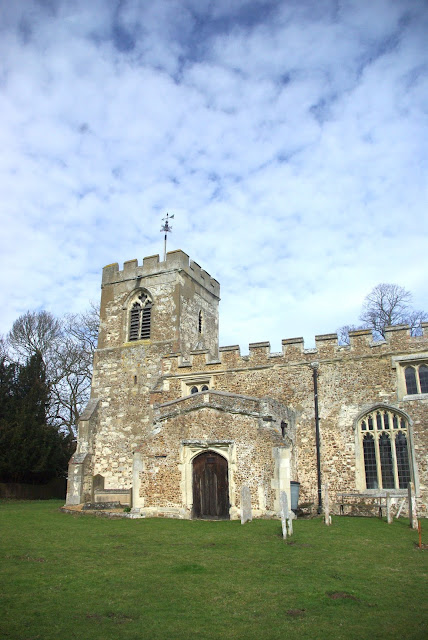 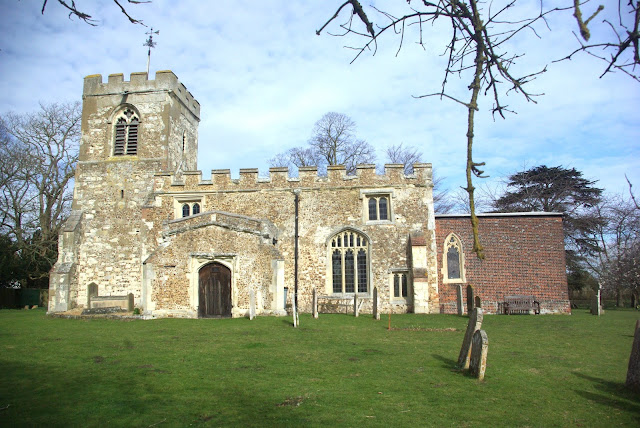 St Nicholas, Hinxworth, is one of the few Hertfordshire churches a part of which we can date with some certainty. In 1365* Nicholas de Hyngestworth (ie Hinxworth) left in his will 20 shillings (one pound) for the repair of the belfry. (According to the National Archives Currency Converter this would be about five hundred pounds today (though we must remember that calculating the value of money from such a long time ago is a highly inexact science).) If it needed repair then, then it must of course have originally been built earlier, presumably nearer the beginning of the 14th century, which is when the church seems to date from (there's no evidence of an older building). 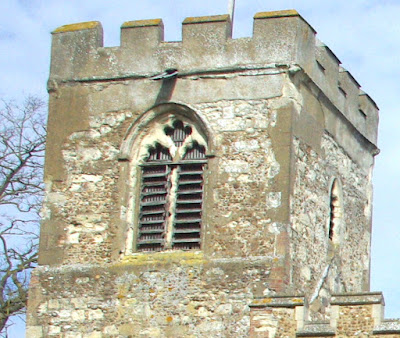 It's worth having a close look at the window at the top of the tower, rather decayed now as it's more or less exactly 655 years old. It has two cinquefoiled lights, from the apexes of which spring tiny mullions which ascend to meet the arch (a rare feature of tracery before the mid 14th century, and an extremely common one after). The design is completed by a quatrefoil between the mullions.

The tower east window (on the right in the photo) probably wasn't altered in the 1365 campaign. Also visible in the photo (bottom right) is the old roof line of the nave; its pitch was lowered in the 15th century (as so many other church roofs were at the time). In the same century all the nave windows were enlarged in the latest Perpendicular style, the clerestory and south porch were constructed and the nave was extended eastwards by a couple of feet. 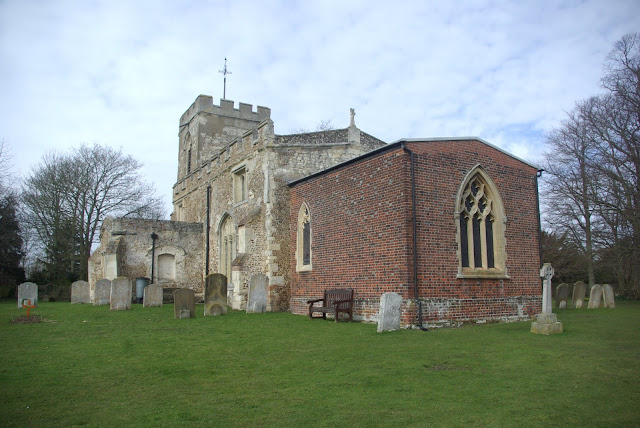 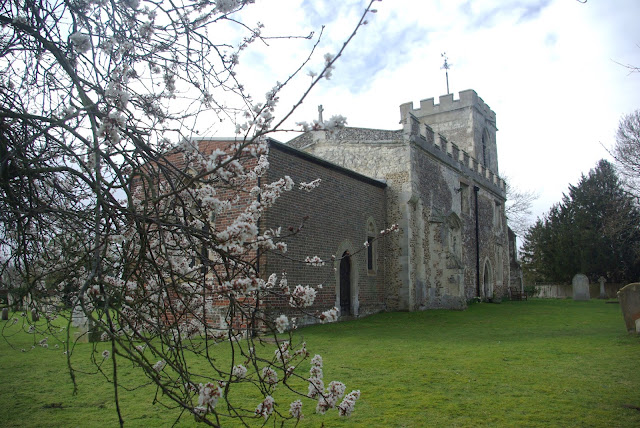 The chancel was built in c.1830, and so is roughly coeval with that of Weston, which is  neo-Norman and admirable. It's hard to find a good word to say for Hinxworth's, however. The windows, in Decorated style, were an 1887 addition. 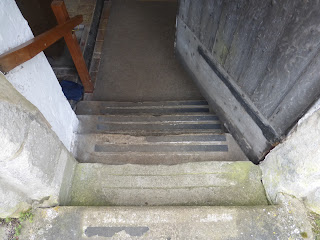 The floors of most old churches are slightly lower than their churchyards, because the surface of the earth tends to rise over the centuries. Hinxworth takes this to extremes, however, requiring no fewer than five steps down to enter. 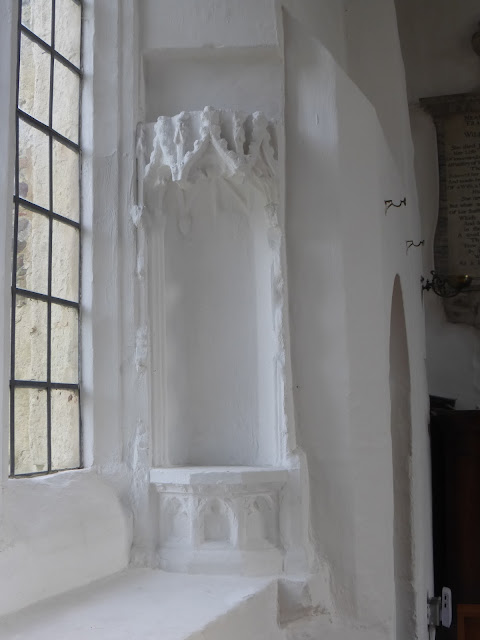 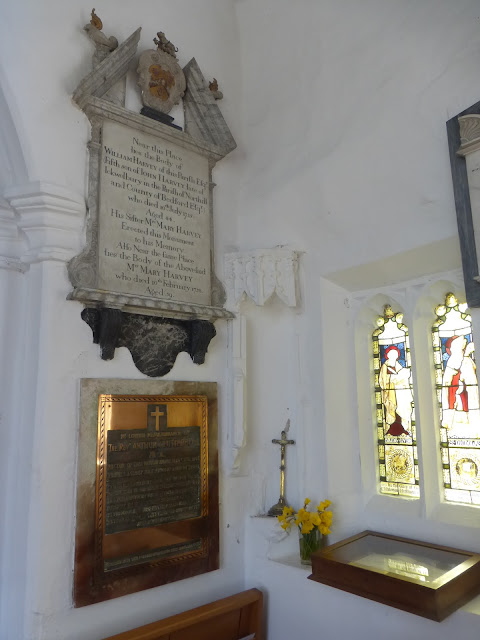 The aisleless nave has two niches in which statues of saints once stood. The one on the north is in the jamb of a large Perpendicular window, while the other is squeezed into the south east corner of the nave. They're quite elaborate for an unassuming church, with decorative crocketed ogee arches in the canopies. 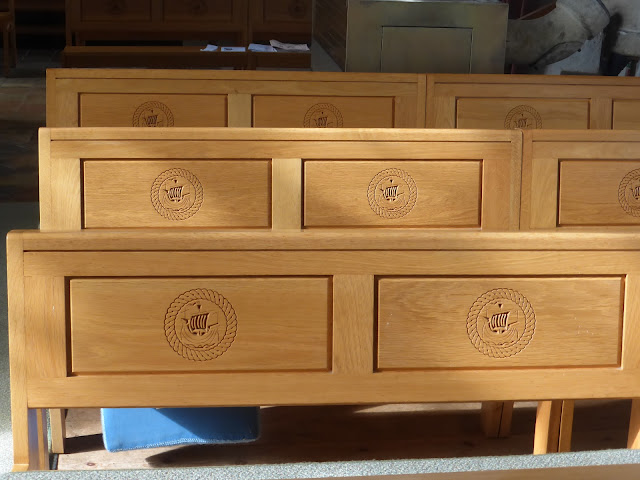 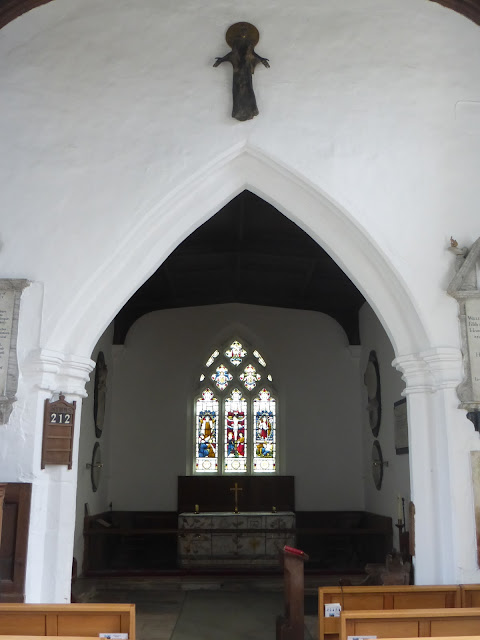 The mid 15th century chancel arch is noticeably lopsided, presumably not because it was built like that, but because it's subsided over the centuries. 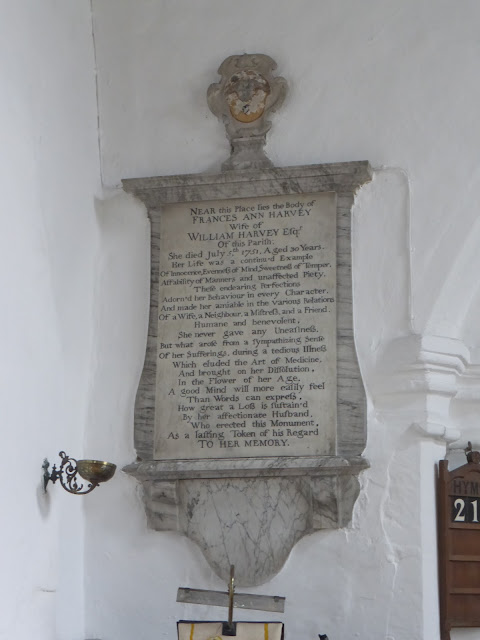 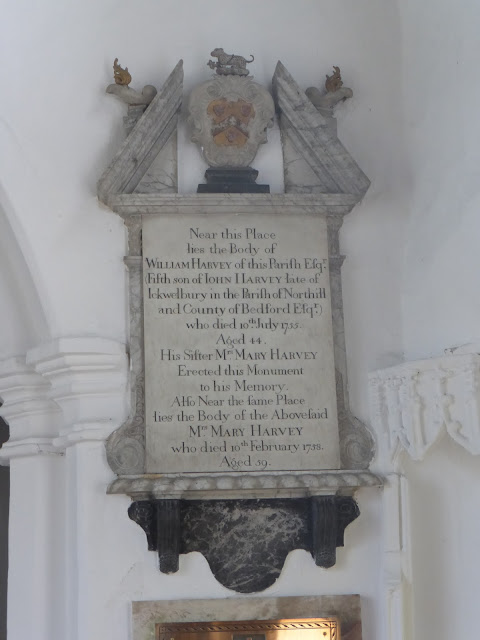 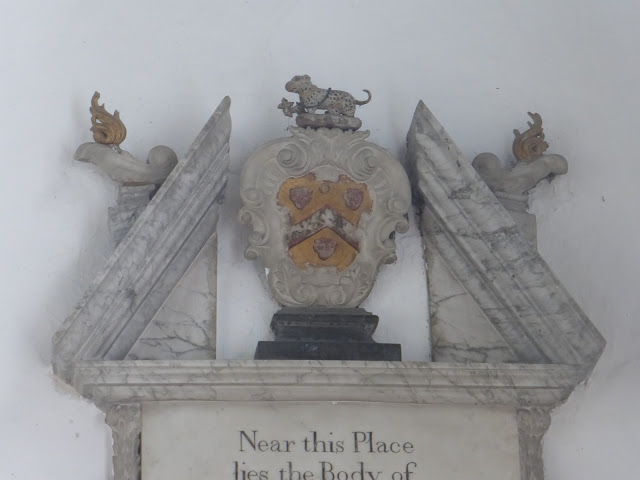 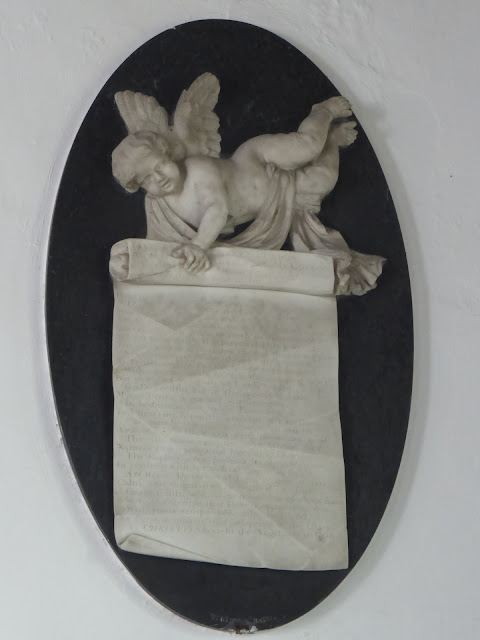 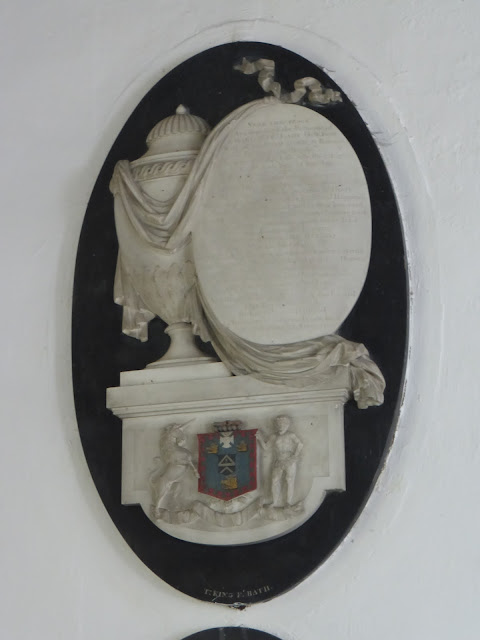 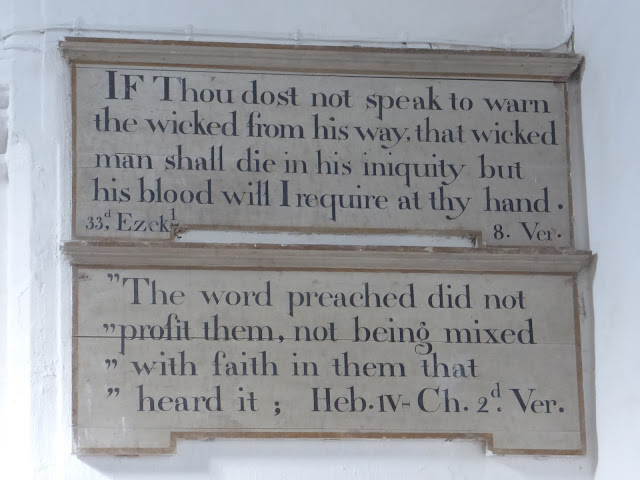 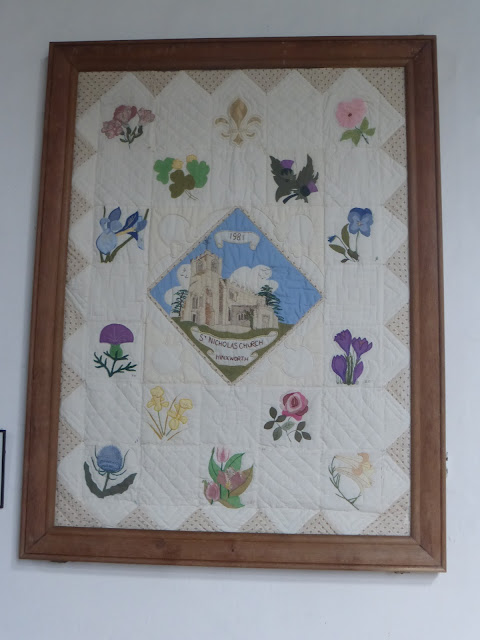 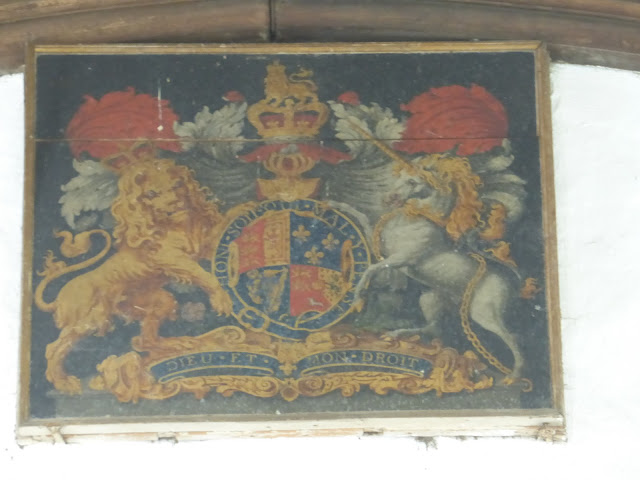 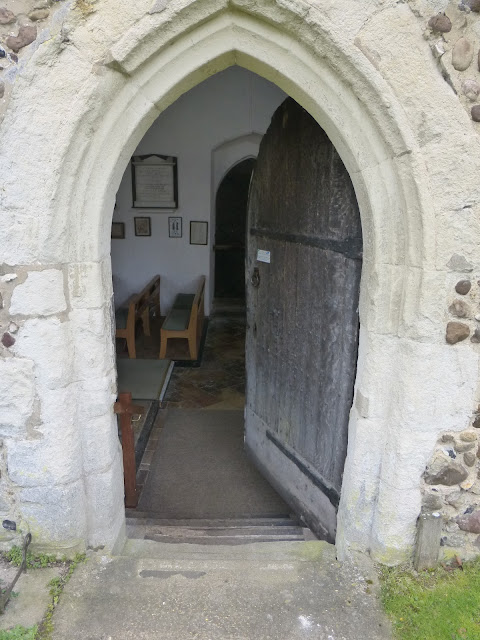 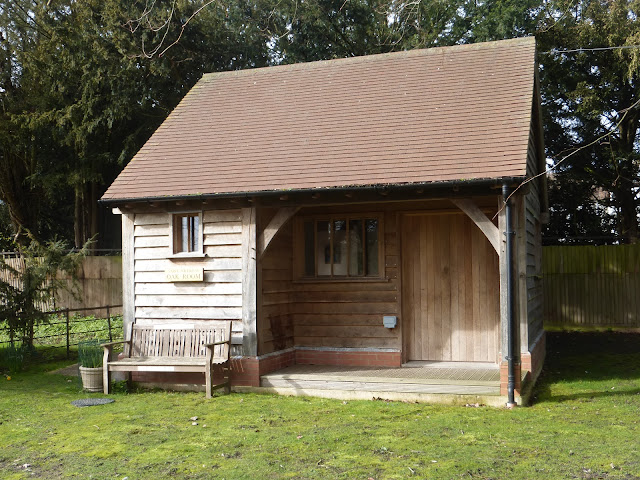 The church's most recent acquisition is the Oak Room, a freestanding outbuilding in the churchyard, built by Gilbert & Gregson of Letchworth. It's small and so can't fulfil many of the functions of a parish hall, but it has kitchen and toilet facilities, and is altogether a very handsome addition. The idea of sitting in it one summer evening, chatting and drinking tea, is appealing.

Hinxworth church has always been open when I've visited.

* 1365 was towards the end of the long, largely successful, reign of Edward III (lived 1312-77, reigned 1327-77). England was experiencing political and military difficulties at the time, compounded by an outbreak of plague in 1361-2 (following the Black Death which reached the country in 1348). Perhaps this is a major factor in the shift from the relatively ornate Decorated style of Gothic to the more austere Perpendicular which happened at around this time.

Further reading:
The Victoria County History
The Statutory Listing
The Royal Commission on Historical Monuments
There's a photo by John Piper of Hinxworth, from the Tate archive, here. His photo is better than mine simply because he turned up on a day when the weather was more suitable. Honest. 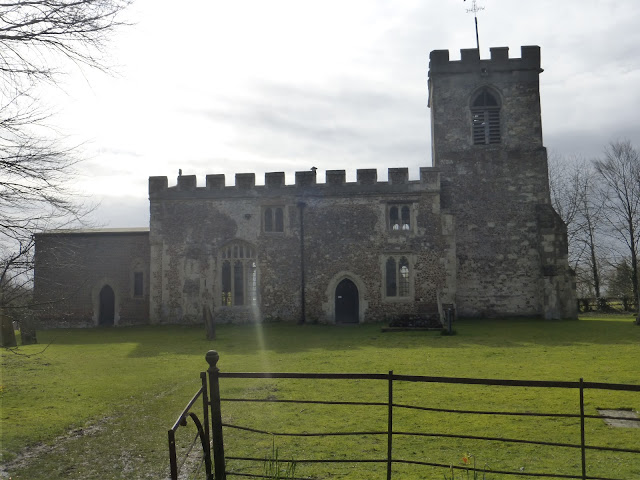 Posted by David Gouldstone at 18:26