A reflection on my first fifty posts 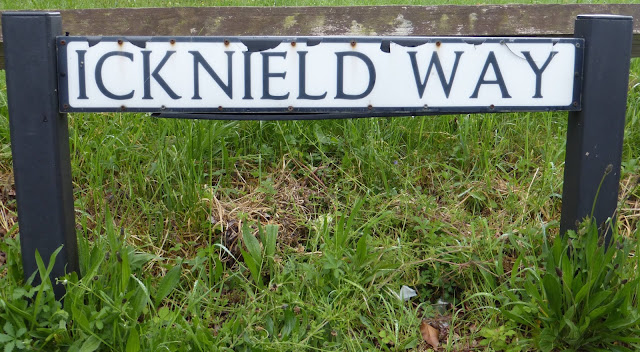 I started Icknield Indagations in early August 2015, and my previous post, about John Surman, was my fiftieth (in getting on for ten months, so about five posts per month). Why did I start it, and why do I continue? These questions aren't altogether easy to answer. I think my main motive is a desire to share things I find pleasurable; this has been the main thing that's kept me going for 36 years of teaching English and History (the pay cheque at the end of the month has had an influence too), and writing a blog gives access to a potentially bigger, even world-wide, audience. (Though quite a few of my posts, as I'll detail later, would have had much bigger audiences if I'd shared them with my smallest class during a flu outbreak that kept large swathes of students off ill and while all the sporty ones had gone off to play in a match.) Sharing a pleasure more than doubles it,* and the more pleasure in the world the better the world will be.**

I've also found satisfaction in trying to translate my enthusiasms into words. To do so (or attempt to do so) I've had to look more carefully at the picture, church, or whatever, than I would perhaps otherwise have done, which has brought its own rewards. Then I've had to try to rationalise and analyse my response, and crystallise my thoughts by finding the right words (though I'm painfully aware that they're never quite right and often all wrong). It's a bit like struggling to complete a crossword puzzle: there's a challenge and a goal, and a reward when you finish. When I press the 'publish' button there's a sense of if not quite a job well done, at least of a job done.

Another motive that all bloggers must share to a greater or lesser degree is the desire to make a mark in the world, to be noticed. I didn't expect this blog to be a popular success or an internet sensation (so at least I'm right sometimes). After all, its main raison d'être, Hertfordshire churches, is, it's fair to say, something of a minority interest, and the same can be said about most of the other subjects I've chosen to write about. The very name of the blog consists of one word that will mean little to most people and another that's obsolete and thus utterly obscure, so I wasn't intending or hoping to reach a mass audience. But I'd be lying if I said that I was completely indifferent to how many readers I have.

Given the niche market that this blog appeals to, I don't think the numbers are too bad. As of today, there have been 3,207 page views. (As I understand it, each time someone looks at a post that counts as a page view, but of course it doesn't mean they've actually read it.) That's an average of about ten per day, which I'm sure many bloggers would find risible, but I'm happy with. I thank my readers; I very much appreciate their interest. Perhaps I can be familiar and say: I very much appreciate your interest.

My most viewed post has been the one about locked churches (113 views), which is encouraging if it means that it's causing thought and debate on this subject, very close to my heart as it is. Very much less encouraging is that my second most viewed post, just slightly less popular (if that's the right word), is the quiz question about Stanley Spencer and Gilbert & Sullivan that I set last Christmas. Much less encouraging because less than half of those who viewed the question viewed the answer, which suggests that the question was so uninteresting that more than half its viewers felt no curiosity about it at all.  I'll try harder next time.

Two posts tie for the booby prize, with just ten views each (which means that maybe five people have read them). Perhaps I should be grateful that the first of these has been overlooked, since although it's ostensibly about Tickencote churchyard, in Rutland, it's really an excuse to publish a not very good poem. I'm a bit peeved, however, that virtually no one has read the other, as it's the only post I've written that tries to be consistently amusing; it's a contribution to the Shakespeare authorship debate (on the Stratfordian side - i.e. I think Shakespeare wrote Shakespeare).

An analysis of the countries from which the posts have been viewed is fascinating. Britain accounts for about half the views, hardly surprisingly, and then another third are from the US. Third on the list is Brazil, which is way ahead of most European countries (except Ireland, which is just a little behind). I very much like the thought of people around the world reading, perhaps sitting on the banks of the Amazon, about minor English 17th century church monuments and Edwardian stained glass. To anyone outside Britain who might read these words I say: hello! It's very nice to sort of meet you.

About a month ago there were two days, about a week apart, when suddenly there were more than fifty page views from Russia, and since then not a single one from that country. Whoever originated those views obviously gave Icknield Indagations a thorough trial and then decided it wasn't for them.

Three posts have been entirely or almost entirely pictorial, and a further five are quite brief, just a few paragraphs; the rest take the form of short essays, between about one and two thousand words. Seventeen posts have been about churches (but discuss only thirteen churches, as I've written about three churches twice, and devoted one post to the subject of locked churches), eleven about art, architecture or photography, seven about history, six about books, five about music, and four I can classify only as miscellaneous. (This is a simplification as many posts could equally well be classified in either of two categories: should a post about Pevsner's Buildings of England series, or the covers of the Arden Shakespeares, be counted under books or art and architecture?)

I intend the main focus of this blog to continue to be Hertfordshire church architecture (with other subjects thrown in as they take my fancy). I've written about only twelve Herts churches (plus one in Rutland); Pevsner lists about two hundred in the county, so, even though a proportion of those I'll judge to be not aesthetically or historically significant and thus not worth blogging about, I've got a long way to go. Literally a long way to go, in some cases, as so far most of the churches I've covered have been quite near my home and I'll have to get round to the more distant ones sooner or later.(However, Herts is one of the smallest counties, and nothing in it can be much more than an hour's drive away.) For obvious reasons, I've written only about open churches yet, but if I'm going to be comprehensive I'll have to face the challenge of getting into the locked ones.***

One thing that puzzles me is that at the top of the blog it says 'Followers: 2', and on the home page (not accessible to the public) it says 'Followers: 0', yet when I publish a post it gets half a dozen views in minutes, and a couple of dozen in the first 24 hours. So despite the computer's gloomy predictions, clearly some viewers are signed up. I'm also puzzled that there have been only two comments, one of which went to my email and so doesn't appear on the blog. Maybe my lack of technical expertise has an effect (the section inviting readers to comment looks different on this blog to that on other Google Blogger sites), or, much more likely, I haven't said anything provocative or controversial enough to be worth a response.

Once again I'd like to say thanks for reading (assuming anyone has read this far); I hope you'll continue to follow my indagations and share some of my pleasures.

Some of my older posts that you might like to look at if you've not seen them before:
The Grimes Graves Venus: a prehistoric (or is it?) fertility symbol from Norfolk
Eric Forbes-Robertson: a nearly forgotten late Victorian/early 20th century painter who was also an actor
An ill-tempered rant about the phrase 'on a regular basis'
Kenny Wheeler's 'Sweet Time Suite': a jazz masterpiece, with Youtube link
T H White's 'The Sword in the Stone': the two competing versions
A fragment of autobiography about my first French teacher
George Orwell in Wallington
Alec Clifton-Taylor: a geological television star
John Collier: a painter contemporary with Forbes-Robertson and not nearly as obscure, but still too little celebrated

* Sharing a pleasure obviously doubles it because the pleasure of the initial enthusiast becomes that of the person with whom it's shared, creating two pleasures where before there was only one. But the first person also has the pleasure of knowing they've brightened someone's life, and the first and second persons can get extra pleasure from discussing their now shared interest. What's more, the second person might go on to share their new pleasure with someone else, and so on and so on.

** Philosophically this isn't true, as it's necessary to have some degree of unhappiness or suffering in life to measure your happiness and pleasure against. (If you support a sports team, if your team won every game how long would it take to get boring?) So theoretically there is a possibility that the world could have too much pleasure, and I wouldn't want to live in a world in which everyone was constantly indulging in mindless hedonism, but clearly in reality this isn't going to happen any time soon.

*** The two most popular posts about churches, with about 70 views each, are on Barkway and Reed. The latter surprises me, as it's in most ways not a particularly notable church in a small village.
Posted by David Gouldstone at 11:29