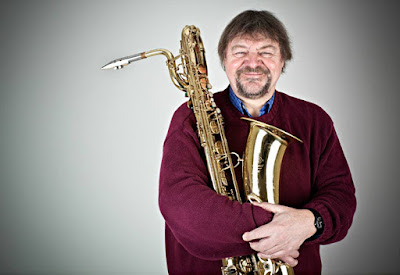 It's fifty years since the great jazz composer and instrumentalist John Surman made his first commercial recording (Local Colour with the Pete Lemer Quintet in 1966), and I'd like to celebrate this anniversary. (By a happy coincidence, this happens to be my fiftieth blog post.) His oeuvre is large and unusually varied, and includes music for his saxophones (and other instruments) alongside brass ensemble, church organ, string quartet (plus a double bass), church choir, male voice choir, and  a vocalist, as well as most conventional jazz formats, from duos with piano to big bands. Trying to survey his whole output in one post would inevitably lead to my writing even more superficially than I do usually, so I've decided to concentrate on the seven solo albums (i.e. albums on which no one but him plays) that he's recorded throughout his career, from Westering Home in 1972 to Saltash Bells forty years later in 2012. (The former has just been rereleased, on folk record label Fledg'ling: another cause for celebration.)

John Surman was born in Tavistock, Devon, in 1944. He first caught the attention of the British jazz scene by playing the often ponderous (in the hands of lesser players) baritone sax on Mike Westbrook's debut album, the very fine Celebration in 1967. Surman also played the more nimble soprano sax, and the bass clarinet (then not as well-known as a jazz instrument as it is today), and composed some of the music. His own debut album as a leader, John Surman (it must have taken some ingenuity to come up with that title), from the following year, must be among the most surprisingly double-sided recordings. Side one comprises happy, sunny, foot-tapping calypso-jazz; surely no one could dislike this. But listeners who heard the first side and bought the LP on the strength of that alone were in for a shock, as when they turned it over they discovered that the second side has elements of discordant, confrontational avant-garde free jazz. I like it very much: familiarity with side two reveals that it's nothing like as anarchic as it at first appears to be, and it's often  beautiful, but it's sometimes challenging, uneasy listening.

The two faces of this recording gave notice of the multifariousness of his subsequent music. In 1969 he formed the free jazz group the Trio (with bassist Barre Phillips and drummer Stu Martin), but  even in this context the lyrical side of his playing often surfaced. This contrast is also found in his first solo album, Westering Home, in 1972. (The title presumably refers to his West Country roots.) This might well have been the first multi-tracked solo recording by a jazz multi-instrumentalist, i.e. one on which one individual plays everything and plays several different instruments.* Surman is quoted on Wikipedia as saying:

I took a break from being on the road. This was just around the time when mono had become stereo,** and then - in a flash - multi-track recording became possible. I was fascinated by the possibilities of, say, three bass clarinets on different racks improvising together. Plus I had a curiosity about 'radiophonics' and tape manipulation and Pierre Henry's musique concrete. So it was in that spirit that I started work on what was to become Westering Home. 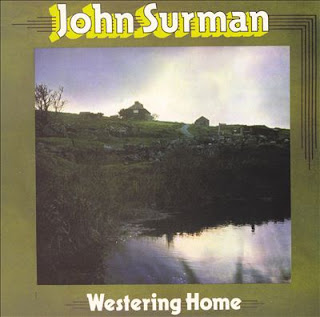 On it Surman plays, in addition to baritone and soprano saxes and bass clarinet, piano, descant recorder, melodeon, organ and/or synthesiser, gentle percussion, and what sounds like a trumpet (though it's buried in the mix so it's hard to be sure).  There are also some (what I assume are) electronic or tape sound effects on 'Jynjyg', which sometimes sound like birdsong, sometimes like trombones, and sometimes like the Clangers. The album establishes the format for the subsequent solo albums: some pieces are pure solos, i.e. one musician playing by himself with no overdubs, some consist of two, three or more instruments electronically overlaid on top of each other, and in some an instrument plays (or instruments play) over a recurring melodic motif (a riff, in a word, or ostinato if you prefer). (On later recordings I assume that these underlying instrumental backdrops are repeated by electronic means, by using sequencers and so on, but on this album they were probably recorded in real time.)

The first piece, 'Mock Orange', begins with what are perhaps finger bells (and sound rather like Buddhist prayer bells, or a bicycle bell warning a pedestrian that they're about to be run over),  a delightful opening to the seven album sequence. A duo of soprano saxes query and quest over a piano (the only time a chordal instrument features), sounding plaintive and folk-like. 'Watershed' is similar in mood, its descant recorder sad and longing, like a call from a far and distant time. (You can listen to it on Youtube*** here.) 'Rill-a-Ree' begins with solo baritone, very sombre and beautiful; at times the theme statement is like a penitential hymn tune played at quarter speed, but eventually an almost jaunty riff appears, while the baritone continues to ponder and probe, making use of multiphonics**** and getting faster and higher, ending the tune and the album on a literal and metaphorical high note.

Some pieces seem designed mostly to explore the sonic possibilities of the instruments. 'The Druid' begins by exploiting the lovely woody sounds of the bass clarinet, and especially its bottom notes, while 'The Walrus' produces gorgeously weird sonorities by overlaying three bass clarinets, (and there   is something endearingly walrus-like about these sounds), and by sometimes making use of their upper registers.

Perhaps my favourite piece is 'Hornpipe', which begins with a melodeon playing what sounds very much like a traditional hornpipe dance tune (but perhaps is a Surman pastiche), with the odd discord thrown in to prepare us for what's to come. A baritone soon breaks in and the mood changes; there are Coltraneish sheets of sound, and after a while a soprano takes up the challenge and a frantic but exhilarating duel begins, each instrument trying to outdo the other in finding different timbres. The melodeon briefly tries to reassert itself, but fails.

Westering Home is a highly accomplished first exercise in this new medium of solo multi-tracking. At times listeners might feel that it's getting a bit noodly and lacking focus (as at the end of 'The Druid', perhaps), and fans of the later, more obviously melodic Surman might find some of the free jazz-influenced moments tough going, but I'd ask them to persevere. The later albums can be treated as background music if you want to (though they certainly deserve and reward closer listening too), but Westering Home is far more assertive and acerbic. Some of the album is rather mournful in mood (every composition appears to be in a minor key), but the overall effect is uplifting. 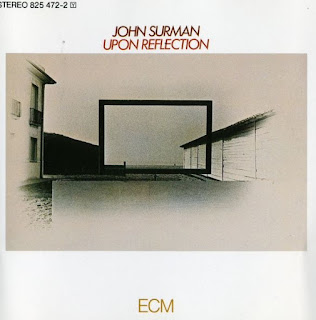 Upon Reflection (1979) was Surman's first recording on the ECM label, beginning a long association that has lasted until the present. (You can hear the whole album on Youtube, with some annoying adverts, here.) The first piece, 'Edges of Illusion', begins with over a minute of synthesiser ostinato before the lead instrument (bass clarinet) enters. This is music that takes its time and refuses to be hurried - there are no harmonic changes in more than ten minutes - in the manner of some minimalist or ambient compositions; most of the other tracks are much busier, however.

Some listeners find the synth sounds (especially of the relatively crude 70's models) used on many of Surman's solo recordings unattractively tinkly. This is obviously a matter of personal taste; in some moods I too find them blandly new-agey, but much more often I rather like them. Anyway, Surman uses synths with tact and discretion; they feature prominently on only two pieces on this album. The second is the album's last composition, 'Constellation', in which they ripple rapidly like reflections in moving water (which is perhaps the source of the album's title).

Westering Home has its parodic dance in 'Hornpipe', but Upon Reflection has several dance-like pieces that are clearly meant to be, and are, enjoyed unironically. 'Edges of Illusion' has a fairly lengthy passage played on soprano sax that begins simply as a discreet counter-melody, but turns into an elegant tune like that of an 18th century dance, perhaps a bourree or allemande. 'Caithness to Kerry', played by unaccompanied soprano, is a 6/8 jig that would hardly raise an eyebrow if it were played at a ceilidh, and is guaranteed to put a smile on your face.  The aptly titled 'Prelude and Rustic Dance' has a choir of wind instruments setting up a vigorously rhythmic riff while a soprano rejoices and skylarks over the top. (How easy it would be to dance to, though, I'm not sure, as it keeps switching between sections in 6/4 - not a standard dance time signature - and 3/4.)

'Following Behind', played on baritone, has no overdubs but instead uses an electronic echo to set up
an infectious rhythm, sounding as if several instruments are (as the title suggests) following each other. It's a shame that it's less than 90 seconds long. 'Beyond a Shadow' creates a suitably umbrageous, even sinister mood, while a baritone indulges in Westering Home late-Coltrane pyrotechnics, and what sounds like a glockenspiel (but is probably a synth) glitters in the dark. 'Constellation', on the other hand, is another piece that feels like a dance and gradually builds up to an almost ecstatic conclusion.

Upon Reflection is altogether more approachable than the previous album; it has some attractive melodies and is varied in mood, and the pieces are more obviously composed (though incorporating plenty of improvisation) rather than experimental. Except that one or two of the pieces are little long (and one is too short), it's very hard to find serious fault with it.

My original intention was to write about all seven solo albums in one post; having written 1800 words on just two I realise this was too ambitious. There's more to follow, when I get around to it, on Withholding Pattern, Private City, Road to St Ives, A Biography of the Rev. Absalom Dawe, and Saltash Bells.

* Bill Evans triple-tracked his piano on Conversations with Myself as early as 1963. Is this the first example of this technique? Is Paul McCartney's McCartney album from 1970 the first ever multi-tracked solo album by a multi-instrumentalist? (Though his wife Linda provides some backing vocals, so it's not quite 100% solo.) If anyone can enlighten me I'd be grateful; Doctor Google seems to be mute on these questions.

** The first mass-produced stereo record was released in 1957, and by 1968 all major record labels had stopped recording albums in mono, so by 1972 stereo was very well established.

*** I've expressed doubts about the ethics of Youtube before, but I won't labour the point.

**** Multiphonics is the simultaneous production of more than one note on an instrument (such as a saxophone) that normally produces only one note at a time.
Posted by David Gouldstone at 18:28