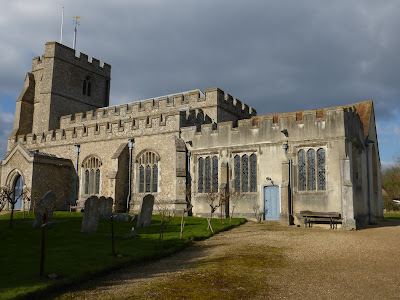 St Paul's Walden is hardly even a hamlet - just a handful of houses, though there's a pub (with a bar billiards table), and an aristocratic estate, St Paul's Waldenbury (which opens its landscaped gardens to the public a few times a year), and Stagenhoe (once a similar estate, now a Sue Ryder home for the disabled). These are set in gorgeous steeply-valleyed beech-wooded countryside, the foothills of the Chilterns; Hertfordshire at its most fetching.

There's also a quite big church (behind the pub), bigger than can have been needed by such a small settlement, even in earlier more devotional ages. The reason for the size of the building is that it served the people of Whitwell, a substantial village a mile or so down the road, as well as those of St Paul's Walden itself. I assume that the inhabitants of the grand houses (or earlier buildings on the same sites) didn't want to make the journey to Whitwell to worship, and expected the more numerous but less influential populace of that village to trudge from their homes instead. I wonder if the current churchgoing population of Whitwell mutter imprecations against the blue-blooded former denizens as they drive along the B651 on Sunday mornings.

Like so many Herts churches, St Paul's Walden at first glance looks substantially 15th (or early 16th) century Perpendicular. All the windows in the photo at the top of the page have mullions (vertical stone divisions) that more or less go all the way to the top of the window without deviation, (a feature absolutely typical of the style), and the arches are either fairly flat, (typical of the 15th century), or  are grouped together under completely flat hoodmoulds, (typical of the early 16th century Tudor style, as in the three windows on the right of the photo).

But, again like so many Herts churches, subsequent and more leisurely glances prove this to be not the whole truth. A walk around the church reveals an early 14th century window at the west end of the south aisle (and more on the north of the nave), and 13th century lancets in the tower. Keep going clockwise and you'll find roundheaded windows in the chancel, the only external hint at the wonderful surprise waiting inside. 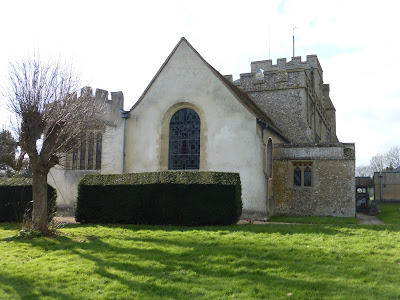 The simple but dignified five bay arcade to the south aisle is also early 14th century; the arches lead you into the spacious, tall and light nave. There are no pews, just chairs, a feature more churches encumbered with ugly, cumbersome, impractical Victorian pine pews should emulate. 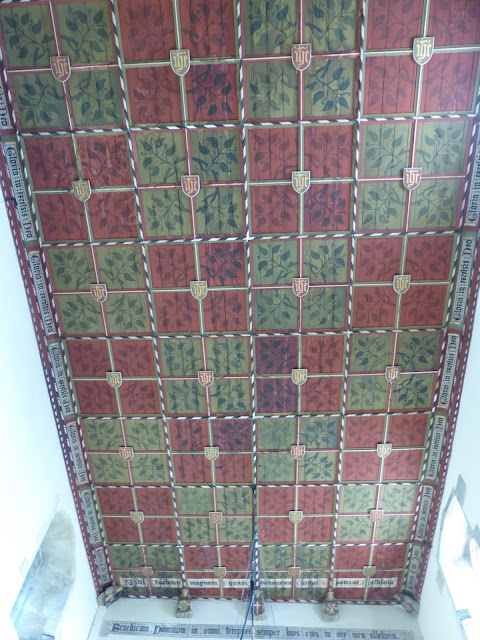 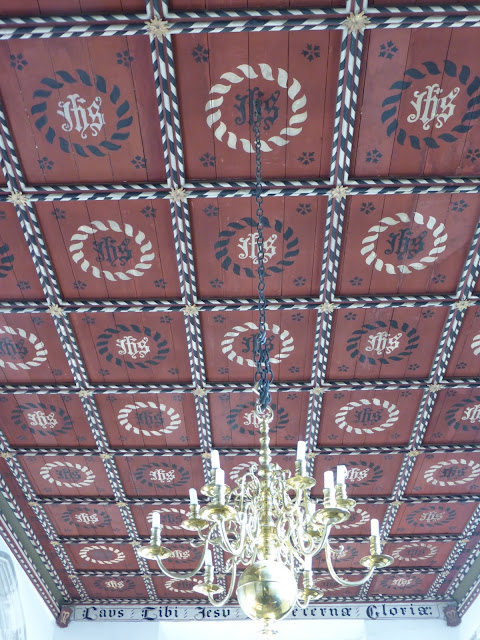 The very pretty flat ceilings of the nave and south chapel were painted following the designs of the noted High Victorian architects and decorators Bodley and Garner; it's a pity that hanging heaters have been allowed to intrude (though I suppose I have to grudgingly accept that congregations have to be kept warm somehow). 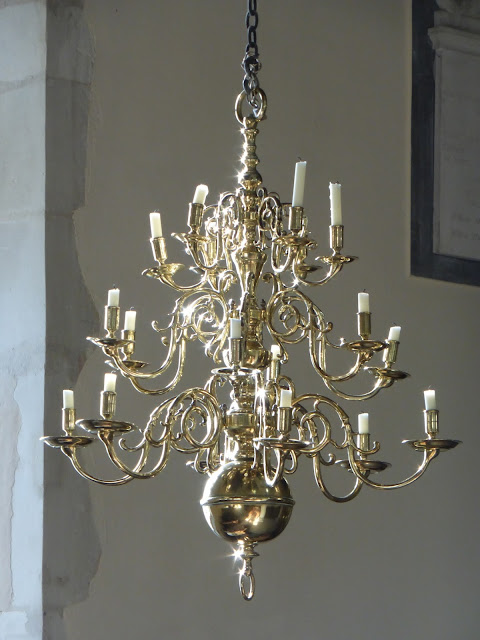 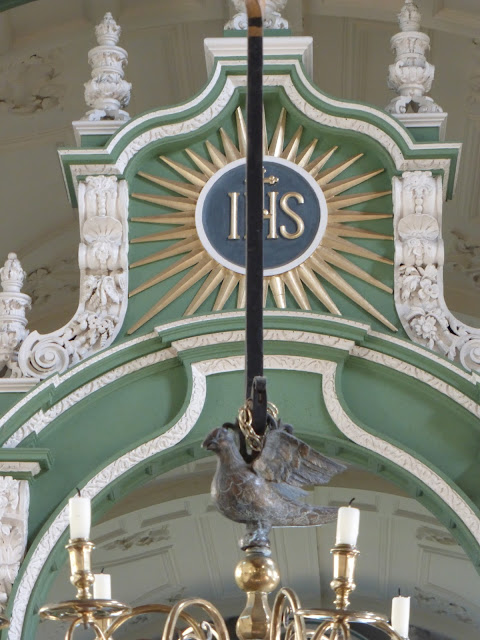 Accompanying the heaters, but beating them hands down in visual appeal, are three superb brass chandeliers, probably 18th century; some of the candle-holders are at pleasing variance from the vertical. The chandelier in front of the chancel screen is topped by a bad-tempered bird (a dove,  representing the Holy Spirit?). 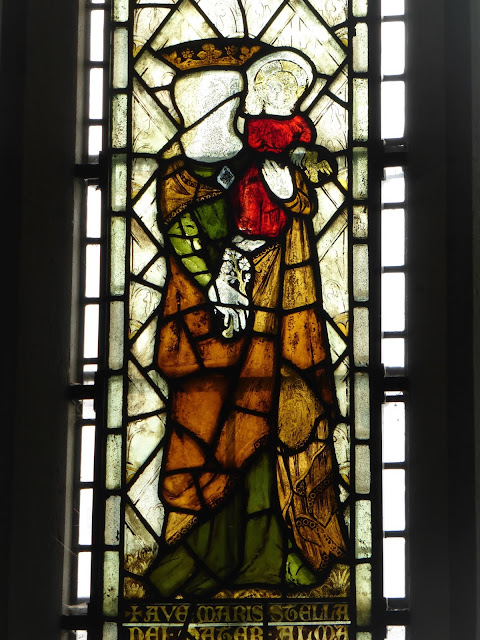 In one of the south aisle windows is this tender early 14th century depiction of the Virgin and Child. Their faces are very worn, but enough survives to give the impression that they're looking at each other fondly, and the colours of their robes still glow. Mary is crowned as the Queen of Heaven and holds a flowering branch in her right hand; this is probably a reference to the Tree of Jesse, a representation of the ancestry of Christ. (I've written about the Tree of Jesse in another Hertfordshire church here.) 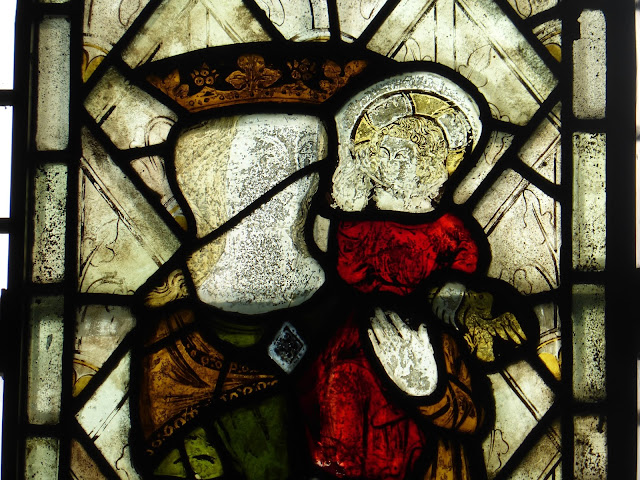 A bird perches on or hovers by her left arm; this is probably symbolic of the soul and its resurrection, or of the Holy Spirit. Alternatively, the bird could be intended to represent a goldfinch, which according to legend pecked  a thorn from Christ's brow on the road to Calvary and was splashed with a drop of his blood; goldfinches often feature in pictures of the Virgin and Child as a means of reminding the viewer of Jesus's eventual fate.* To modern eyes, however, it's simply a charming detail.

Until a decade or two ago this stained glass was under the tower, but was moved, presumably so more people would see it. This was undoubtedly a Good Thing. But there was something numinous about venturing into the relative dark of the tower room, risking banging your head on the organ in the process, to witness it in situ**, its deep browns and reds glowing richly in the afternoon sun. In its current position the colours are not as effective; the clear glass that's been added around the sides to make it fit a bigger window doesn't help. I'm just being a miserable malcontent. Ignore me. 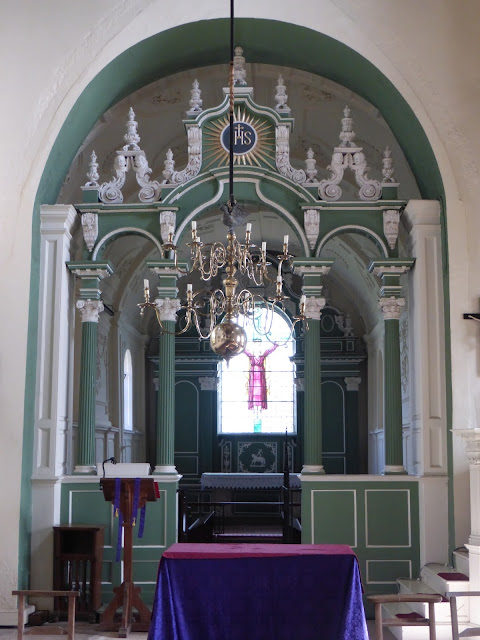 This glass would be the knock-out attraction of many churches, but St Paul's Walden has something to top it: the chancel screen and chancel, of 1727 and 1762. (Recently the altar has been moved from the east wall to the east of the nave, spoiling the view of the screen quite badly.) An inscription on the back of the screen proclaims: 'THIS Chancel was first Repair'd and Beautifi'd by EDWARD GILBERT  ESQR of the Bury in the Year of our Lord 1727'. (Relish the 18th century use of capitals and apostrophes.) The decoration of the screen is immensely rich (indeed, almost too rich for its size), as if the unknown designer*** couldn't resist using every device and motif he knew. Front and back are equally ornamented. 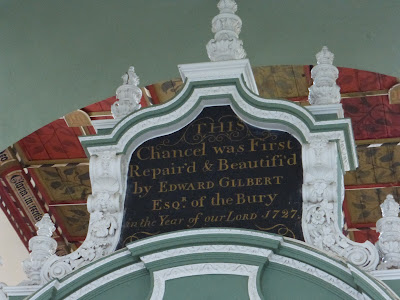 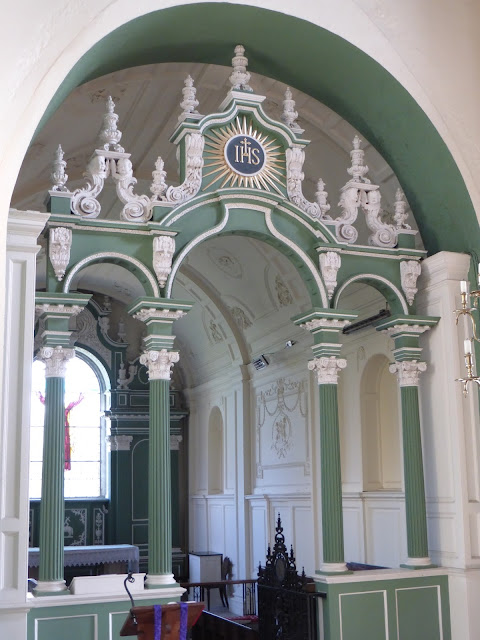 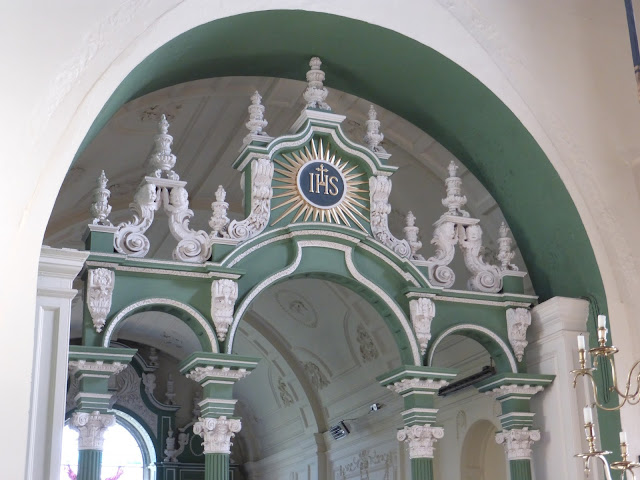 There are four fluted slim Corinthian columns, each with its own diminutive entablature, from which spring arches. Above these, on the left and right, scrolls morph into pairs of putti which support elaborate urns; these features are flanked by pairs of slightly smaller urns. The central, wider arch is topped by ogees (i.e. S-shaped curves) and three more urns. Everything is exuberantly carved and garnished with fancy finials. 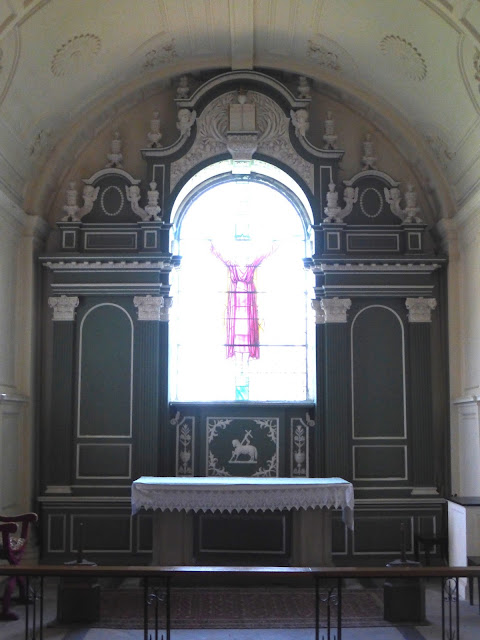 The reredos on the east wall of the chancel is similar to the screen, though with satisfying variations; the columns have become square pilasters, and the central arch has lost the ogee and gained a pair of putti, while the putti on left and right support segmental pediments. Below the window is a Lamb and Flag (representing Christ), and above a book surrounded by fruit and palm leaves. The book is inscribed (in Greek) 'The New Testament' and surmounted by a flaming heart (a surprisingly Catholic feature at this date). 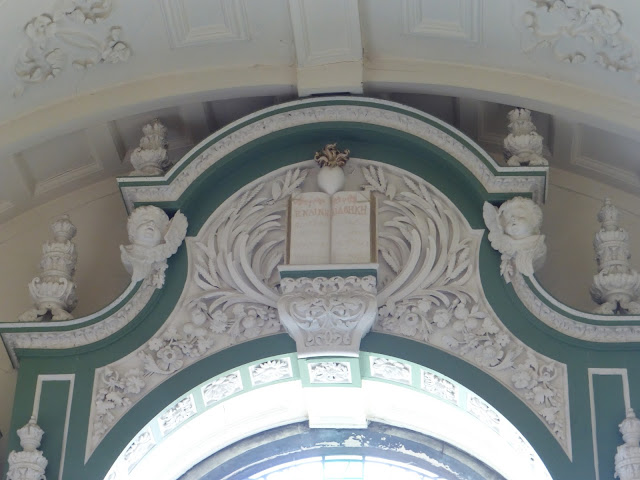 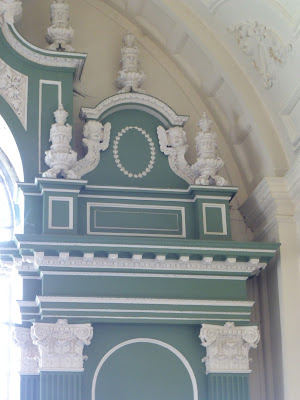 Until 1946 the space now occupied by the window was simply a niche; in that year it was opened up and filled with stained glass, a Crucifixion by Hugh Easton. 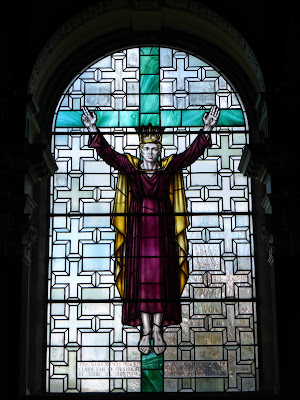 This vision of Christ as Superman, Hollywood-handsome, ready to zoom up into the sky with his cape billowing behind him (though at least he's wearing his underpants inside his clothes),  doesn't appeal to me at all. It's very similar to Easton's 1949 west window of St Dunstan's, Stepney, including the strange two-dimensional green marble cross. (See here.) At least the Stepney window has a bleak (almost post-apocalyptic) cityscape at the bottom, giving it an interest the St Paul's Walden version lacks. 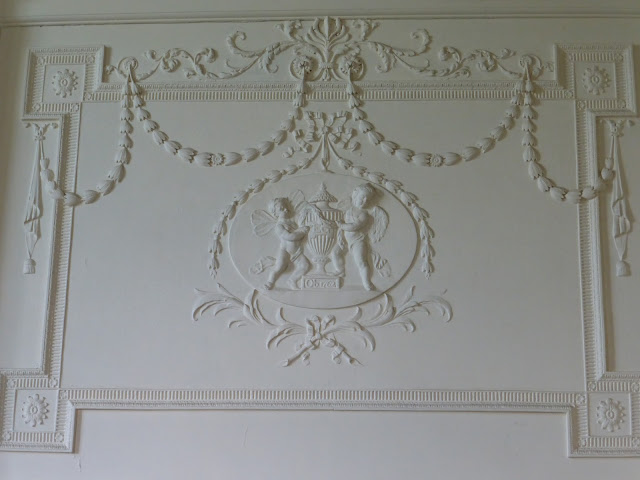 I assume that the reredos and screen date from 1727, while the stucco decoration on the walls of the chancel dates from Gilbert's death; an unobtrusive inscription on an urn reads 'EG ob. 1762'. Two putti frolic around it, not looking at all grief-stricken; the one on the right has traditional feathered wings, but those of the one on the left look like a butterfly's. 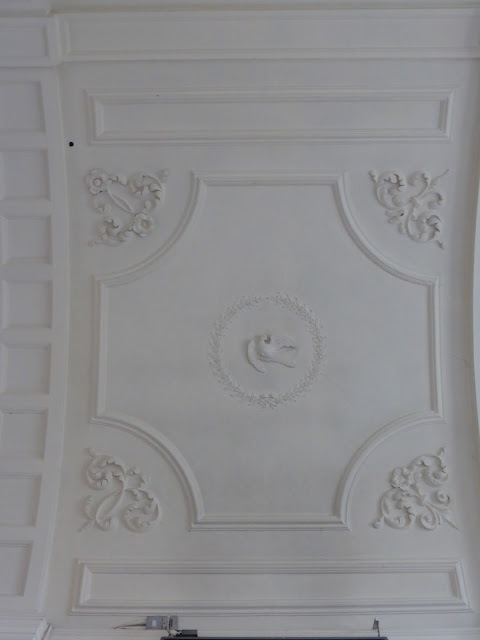 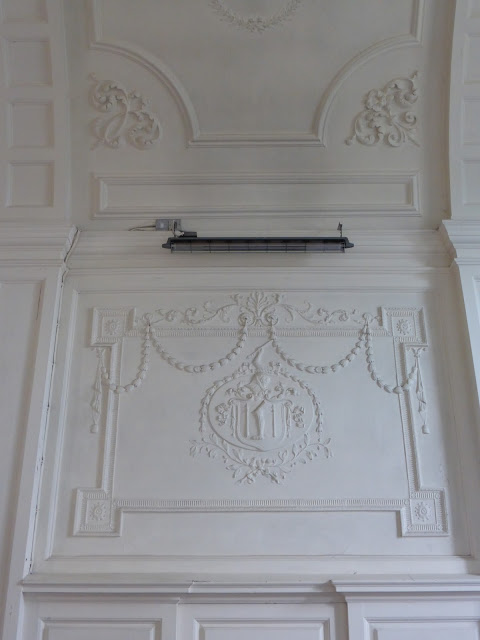 On the north wall Gilbert's coat of arms is displayed, featuring, rather bizarrely, a single armoured leg. (The same motif appears on some ledgerstones.) The decoration of the barrel-vaulted ceiling is extremely attractive (though once again heaters spoil the effect); the highly successful green, cream and white colour scheme is by Raymond Erith from as recently as 1972. 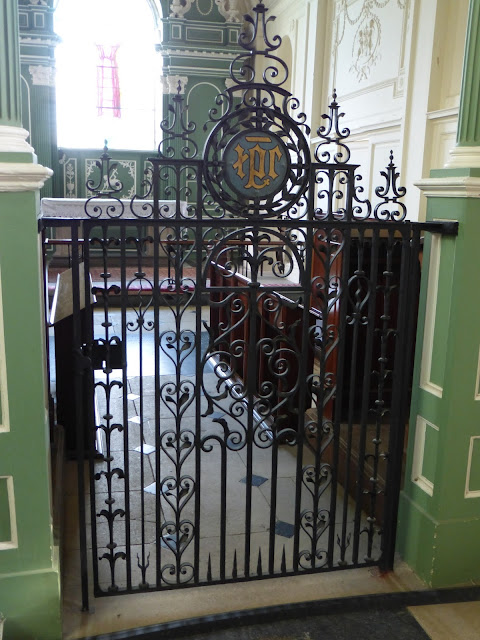 The delightful wrought iron gate to the chancel is presumably contemporary with the screen. The pulpit, however, is Edwardian, and clearly designed to harmonise with the screen. The chaste chancel stalls, which take their inspiration from late Georgian furniture, are c1945. Another ledgerstone, continuing the tradition and finely lettered, records that they were erected in memory of Dorothy Dewar and her son John, a pilot in the Second World War, 'who, after fighting thro' the Battle of Britain, was lost on patrol 30th March 1941.' 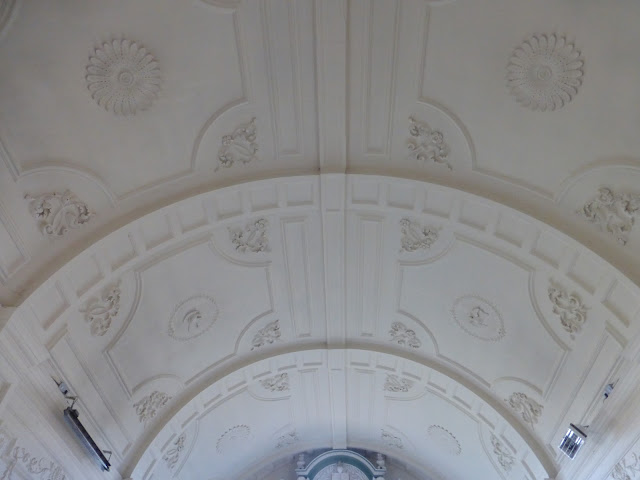 I've probably visited St Paul's Walden church more than any other in Hertfordshire or anywhere else; it's always open, is set in beautiful bosky countryside with a circular walk passing two pubs and a tea shop, and is endlessly rewarding, with elegant contributions from the 14th, 15th, 18th, 19th and 20th centuries. It's one of my favourites.

* Or possibly the bird is pecking at Christ's hand and feeding on his blood, a symbol of the Eucharist.

** I assume that the glass was made for the tower window and has always been in the church. However, the Victoria County History (1908) states categorically that 'there are no remains of old glazing'. Improbable as it seems, the authors of this magisterial book must have overlooked it. Is it possible that, very fortunately, the same happened when the iconoclasts arrived? There's no trace of any other medieval glass in the church, and it seems unlikely that only one window (and that one hidden away in the tower) was adorned with stained glass, so the others have either been completely lost through accidental damage (possible, but wouldn't some fragments survive?), or deliberately smashed. This would most likely have happened during the reign of Edward VI (1547-53), or possibly during Elizabeth's reign, or during the Civil War and Commonwealth in the mid 17th century. The VCH suggests that the ground floor of the tower was once used as a living room; can we imagine that the Puritan vandals missed the Virgin and Child because they were shut away in what was effectively someone's home?

*** James Paine (1717-89), who probably worked at the Bury, has been plausibly suggested as the designer of the stucco decoration of 1762, but he can hardly be responsible for the screen of 1727. The Royal Commission on Historical Monuments (1911)**** states that the chancel 'is of Renaissance character, and is said to have been designed by Wren.' I include this attribution only as an example of the rustic optimism of an age before the study of art history became established.

**** The Royal Commission on Historical Monuments was founded in 1908 and was intended to make county-by-county inventories of all England's notable buildings (built before 1700, though later volumes gradually extended this date to 1850). Hertfordshire was the very first county to be tackled, and it took only three years for the book to appear. Later volumes were very much slower to be published, and when the last one emerged in 1977 still only about a quarter of the country had been covered. The RCHM still exists in some form, as part of Historic England (formerly English Heritage). 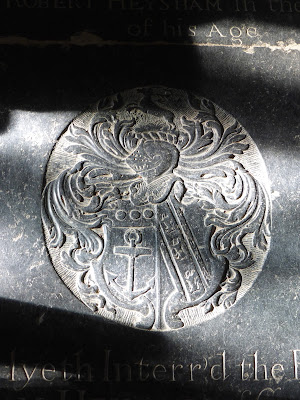 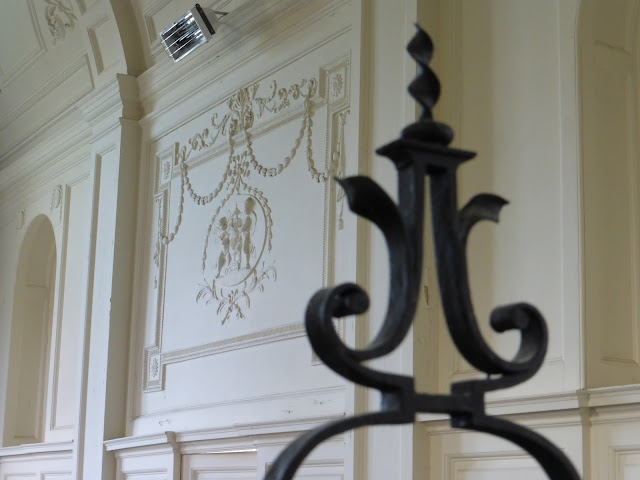 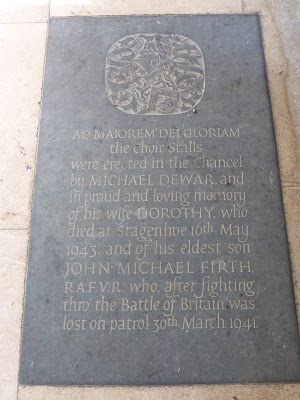 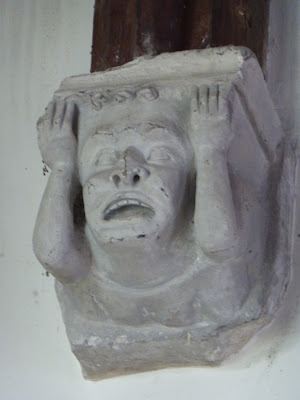 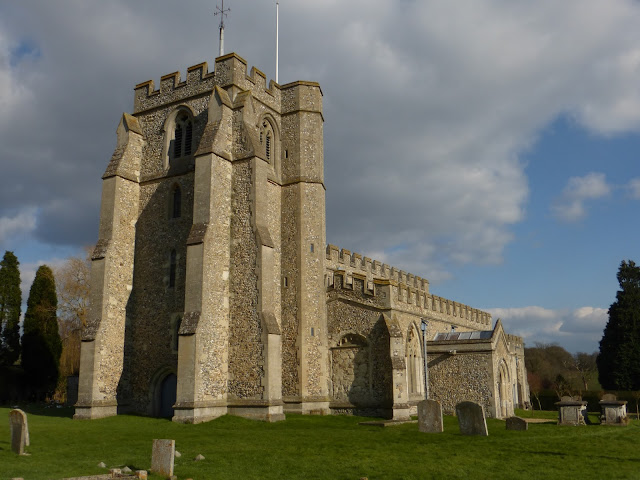 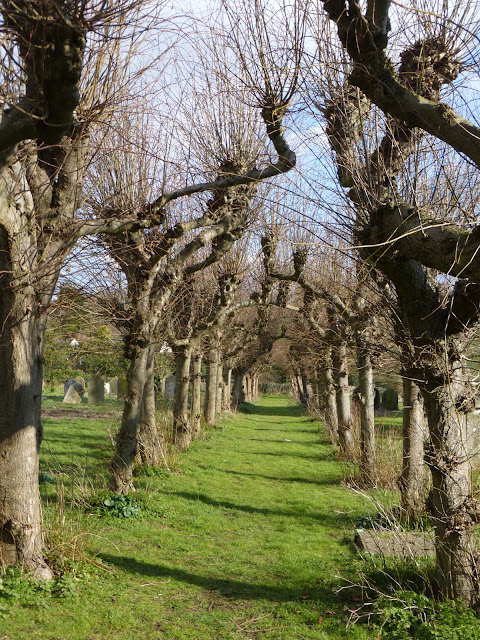 Posted by David Gouldstone at 18:08