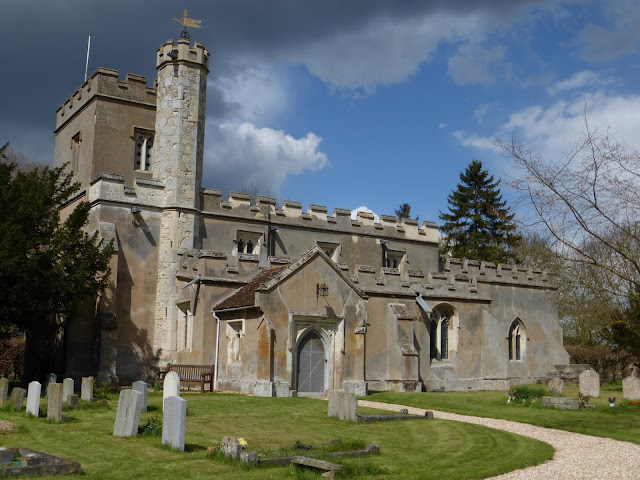 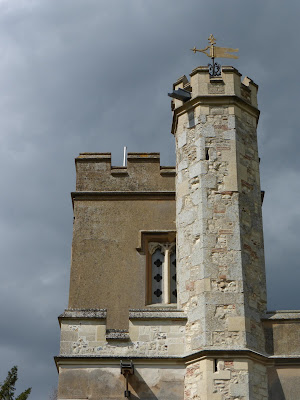 Newnham is a small village between Baldock and Ashwell; despite being only half a mile or so from the A1(M) it feels very rural. The appropriately smallish church feels as if it's trying to puff its chest out and stand on tiptoe to appear bigger than it really is by being castellated throughout (except the porch). The stair-turret being taller than the tower also gives this impression, and creates some dramatic skylines as you approach from the south-west. Most of the exterior is shrouded in Victorian cement, which tends to trap water, and is now badly stained. It's been removed from the north of the nave, (or perhaps this wall wasn't cemented in the first place), exposing uneven courses of clunch (a soft chalky limestone) rubble, which is only a marginal improvement. Nevertheless, while the church may be quite small, it's quite big on charm. 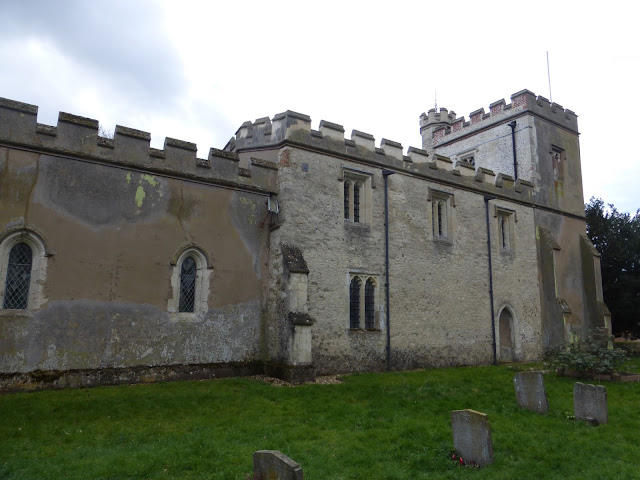 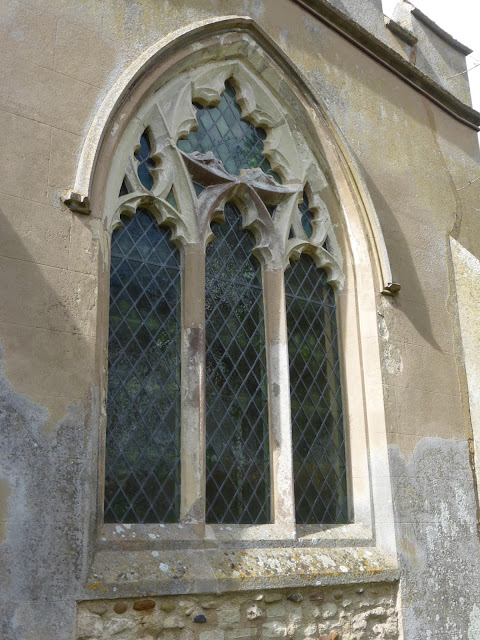 There's a bit of a mystery over the date of the east window. Everything I know about medieval architecture tells me that it's in the Decorated style, from the first half of the 14th century, and Pevsner agrees (noting that Abbot Wheathampstead repaired the chancel in 1420-40). The total absence of straight lines in the tracery (the decorative stonework in the top of the window) surely proves that it can't be any later. However, the Victoria County History of 1908 says 'the east window is an interesting example of three lights with a double cusped spherical triangle in the head, the details showing it to be of 15th century date, in spite of the unusual nature of the tracery. It is just such an exceptional design as might arise under the circumstances.'* It's not at all clear (at least, not to me) what 'under the circumstances' means. What circumstances? The Royal Commission on Historical Monuments volume of 1910 agrees that the window is 15th century, as does the text of the document that officially listed the building as grade II* in 1968, (noting its 'unusual tracery'). Who am I to disagree with such august authorities? But I'm still going to take some persuading that it's not Decorated. 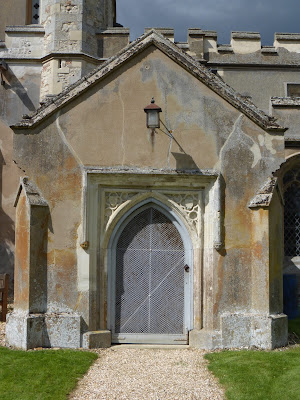 It's worth pausing in the 15th century porch before opening the (original) door. 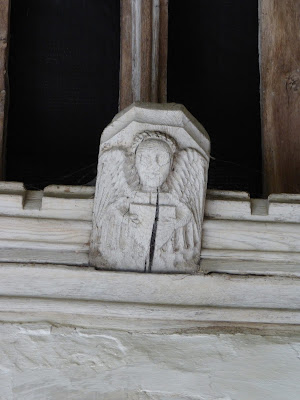 There are two wooden shield-bearing angels, and a great deal of graffiti carved into the soft stone. 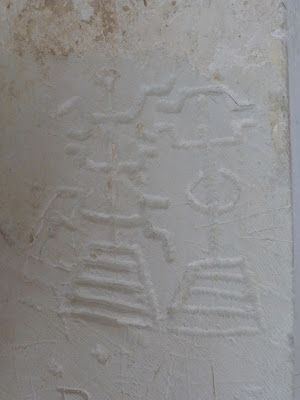 Some of it is mysterious, such as the strange shapes above (by the west window). They remind me a little of corn-dollies, but your guess is a good as mine. 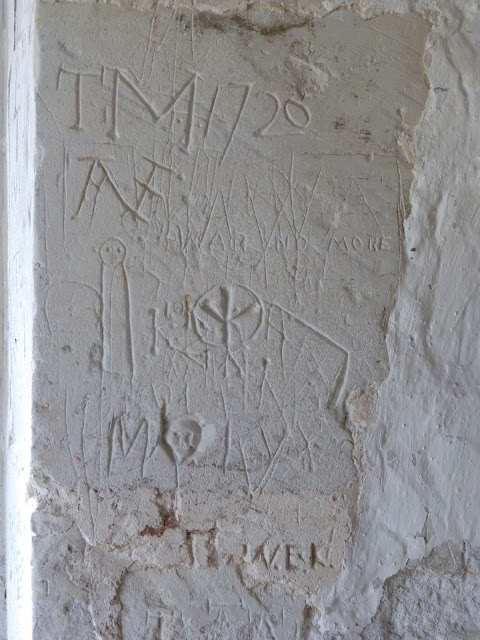 Some of it is a palimpsest of old, not quite so old and new. It looks to me as if there are a number of 'VV' symbols here, (again, next to the west window), for example, under the 20 of the date 1720. This is one of the commonest forms of medieval graffiti, consisting (or so it is thought) of two overlapping Vs, forming something like a W, and standing for 'Virgo Virginum' (Virgin of Virgins), in honour of the Virgin Mary. These shallow carvings were perhaps apotropaic, in other words intended to ward off evil. But we can't know for sure. 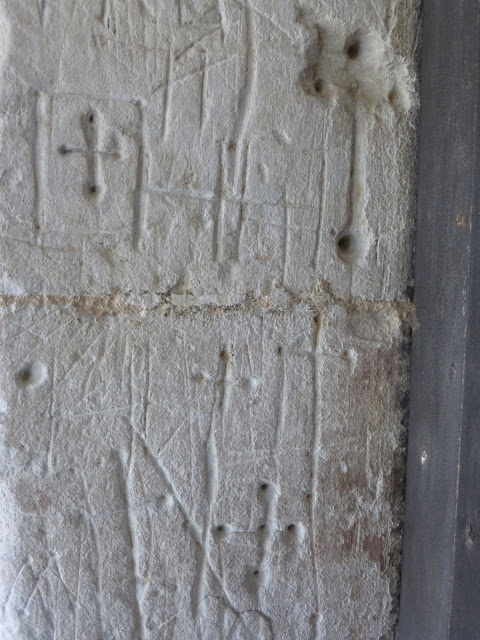 At least the meaning of these crosses by the south door is clear. 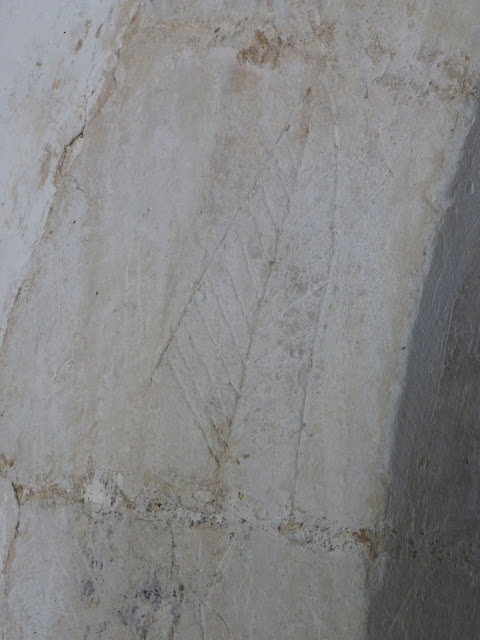 On the other hand, why would someone go to the bother of engraving this leaf (or dagger, or abstract shape), also by the south door? 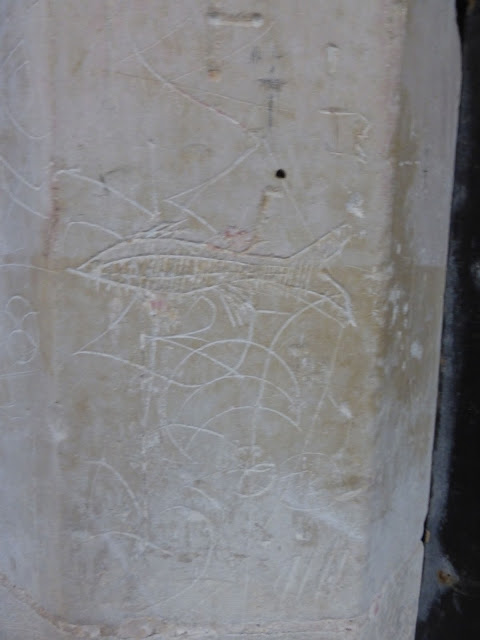 This fish (by the door to the stairs to the tower) might be intended to represent Christ (the Greek word for fish is an acrostic for (in English) 'Jesus Christ, Son of God, Saviour'), or on the other hand might have been made out of purely secular and/or casual motives. The study of medieval (and later) graffiti brings us in some ways very close to ordinary people of earlier ages - we can literally touch the messages they've left behind - yet in other ways they remain frustratingly out of reach, as interpreting the messages is no more than educated guesswork.**

The interior of the church isn't crammed with objects of delight, yet it's very pleasing; it feels relatively unrestored, despite the Victorian roofs and fittings. The first thing you see as you enter the church (it's deliberately positioned opposite the door to maximise its visibility) is a large wall painting of St Christopher carrying the infant Christ across a river. Unfortunately, it's not at all well preserved (Cottered has a rather better example) and the only details that can be enjoyed are the seven vigorous fish flashing around the saint's feet between the rocks of the river bank. 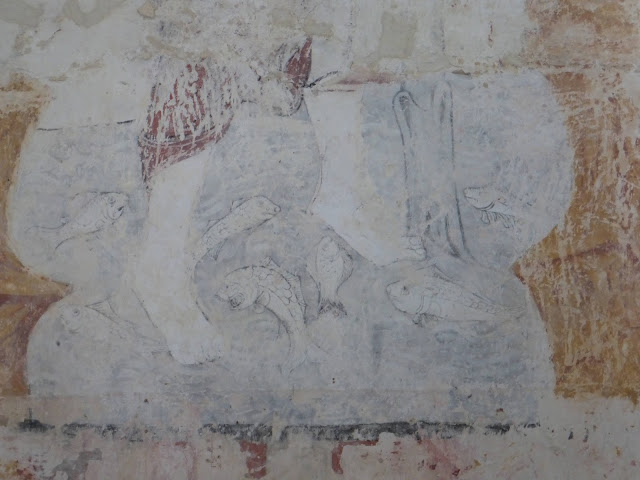 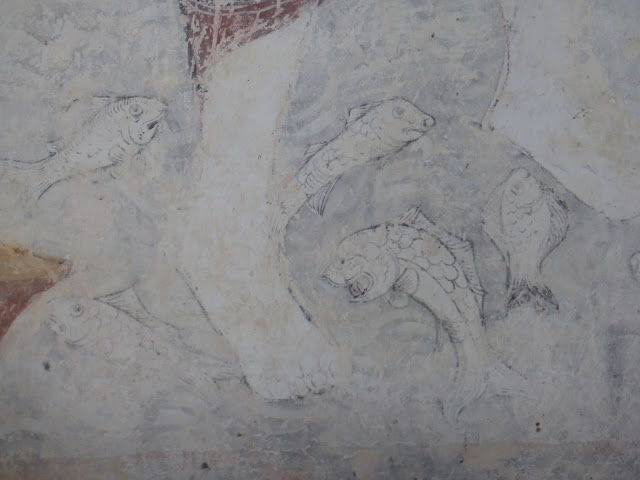 All seven are different and perhaps represent separate species; someone with greater piscatorial proficiency than me might be able to name them. Is the one on the right of the picture above a flounder?

The ghosts of other murals can be glimpsed, but they're far too faded and fragmentary to be of any aesthetic interest. 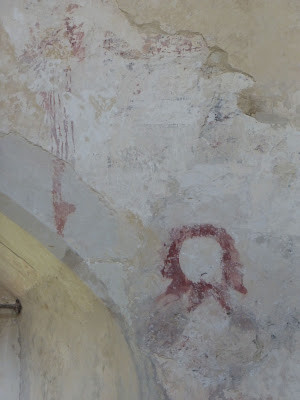 The one above, for example, (by the easternmost north nave window) seems to represent, on the right, a cowled figure (presumably a monk), and dangling down onto the arch the tail of another fish. 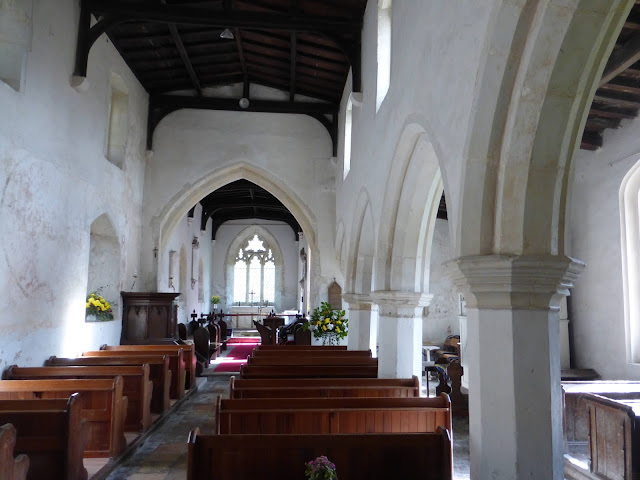 The squat 14th century four bay arcade, the capitals more or less at head height, leans to the south. The south aisle has four plain 15th century pews, similar to those at Wallington, a rustic brick floor and a mid 19th century organ in a naive Gothic case. 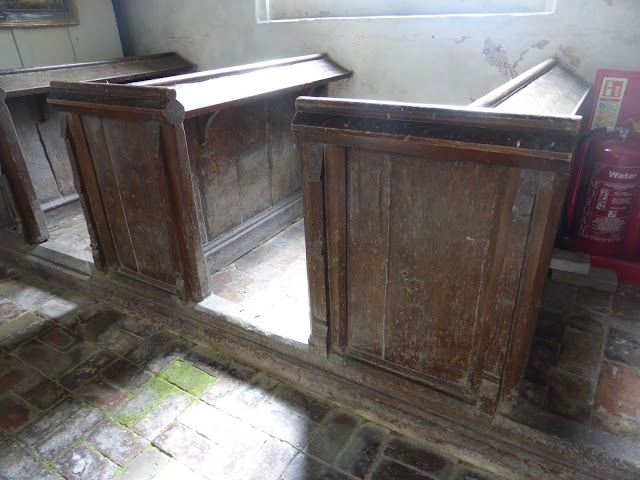 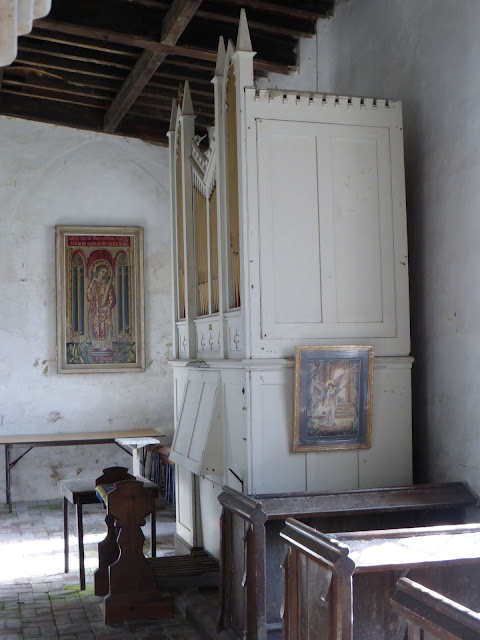 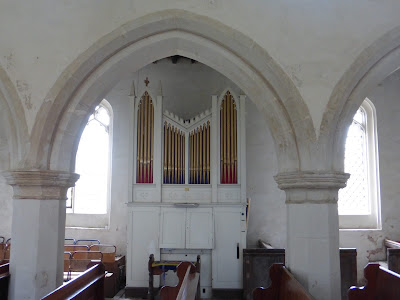 The normally reliable and astute Shell Guide: Hertfordshire goes overboard by calling the font 'glorious' (it's a pretty standard 15th century design, and rather knocked around), and the monuments 'handsome' (there are only two of any note, again not especially exciting).

The very simple First World War memorial records that of the twenty-one villagers who went to fight, only one died. The similar Second World War memorial lists the women who served as well as the men, which I don't think I've noticed anywhere else (though perhaps I've just not been paying enough attention to such details). 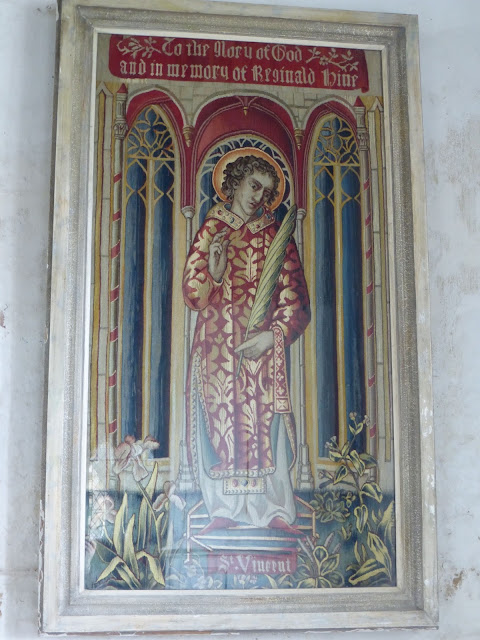 At the east end of the south aisle is a tapestry by Percy Sheldrick (1890-1979), who was born and lived most of his life in nearby Ashwell. He became a famous needleworker, working as a tapestry weaver for the firm of Morris and Co (founded, of course, by William Morris). It commemorates Reginald Hine (1883-1949), the historian of Hitchin. He was born in Newnham, and worked as a solicitor, though his heart wasn't really in it. His passion was local history, and he published a two volume work on Hitchin (1927 and 1929), which has been recognised as a model of its kind. (However, it has to be said that later historians have accused him of sometimes twisting facts to make a good story; see here, for example.) In 1946 he published the autobiographical Confessions of an Uncommon Attorney, which was a surprise best-seller, and is still a highly entertaining read today. 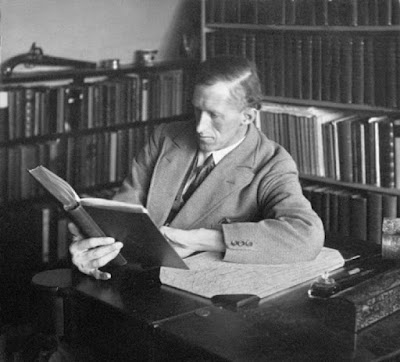 Sadly, he suffered from depression, and when he was threatened with being struck off as a solicitor (for apparently trying to poach other solicitors' clients) in 1949 he killed himself. After an entirely normal conversation with a friend on a platform at Hitchin station, and with a return ticket to London in his pocket, he stood up, walked to the edge and threw himself under a train.

The tapestry depicts St Vincent Saragossa (the church is dedicated to St Vincent, without being specific which of several saints of that name is being celebrated), who was martyred in about 304 by being burnt alive on a grid-iron, which is depicted in the tapestry. He holds an oversized quill pen, in reference to Hine's writings. The tapestry is based on late medieval designs and brings vivid colours into an otherwise fairly colourless church. Pevsner dates it to 1949, which would seem to be entirely plausible, but in fact Sheldrick made it as a gift for Hine during the latter's lifetime; Hine chose the design and subject matter, and it hung in his house for years. It seems eccentric to say the least to have a memorial to oneself in one's home.

Immediately west of the church is a very substantial, water-filled, rectangular moat. It's obviously medieval, but beyond that I wouldn't be able to date it. None of the authorities even hazard a guess. There's no trace of a building on the island (except a shed). Was the moat constructed as a status symbol, or was it a necessary defensive measure? 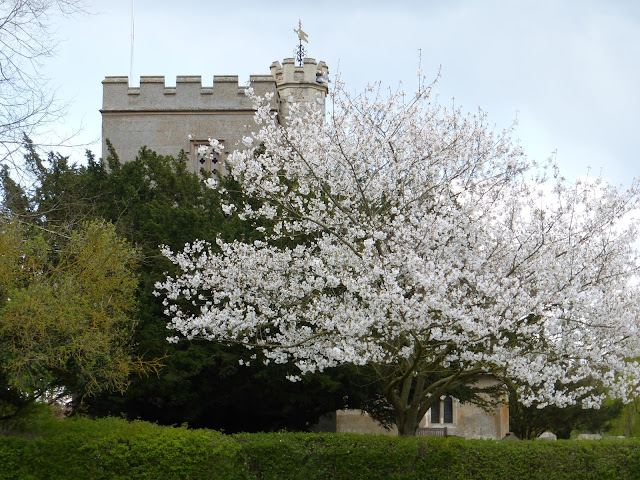 Newnham church has always been open whenever I've visited, and, although it's unspectacular, I love it.


* The mystery is even odder, because in a different paragraph the VCH mentions John of Wheathampstead's repairs of 1420-40, and says that the east window must date from this time. Read the entry here and see if you can make more sense of it than I can.

** I recommend Medieval Graffiti: The Lost Voices of England's Churches, by Matthew Champion (2015).

Posted by David Gouldstone at 22:24