Learning to look with Alec Clifton-Taylor

Alec Clifton-Taylor's television series Six English Towns was first broadcast in 1978. I can't have watched it on its first run, because I didn't have a television then; I suppose I caught it on a later repeat. He begins the first programme of the first (of three) series (on Chichester) explaining that he intends to offer the viewer 'an exercise in looking', and that's just what the programmes are. It's hardly an exaggeration to say that Alec Clifton-Taylor taught me the art of looking.

He was educated at Bishop's Stortford College (does this mean that like me he was born in Hertfordshire?), and Queen's College, Oxford, where he read history. He then spent a year at the Sorbonne, but his father, worrying as parents are prone to do about their children's future prospects,  induced him to leave and go into insurance-broking. However, he was so miserable that he persuaded his father to allow him to go to the Courtauld, where he trained as an art historian (still a relatively rare subject in Britain at the time), and graduated with a first in 1934. He became a lecturer at the University of London Institute of Education and the Royal College of Art, and during the war served in the Admiralty. He returned to university lecturing in 1945 until he became a freelance at the age of fifty in 1957, and lectured throughout the world, including thirty-two states of the USA.

He wrote reviews for Country Life, and probably for other publications too, and advised Leicestershire County Council on the purchase of art works for display in schools. (I doubt very much if such a job exists today.) He didn't publish his first book until 1962, when he was fifty-five, and it's his masterpiece. If he'd never written anything else, nor made a single television programme, The Pattern of English Building* would still guarantee him a seat on the top table at the banquet of writers about England. 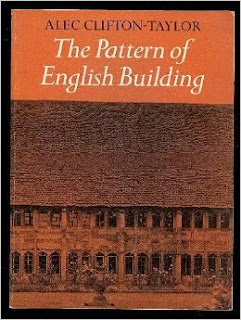 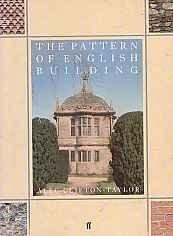 As he explains in the Foreword, 'the principal purpose of the book' is 'to try to increase the pleasure of those who travel about the country with open eyes', (truly a noble and praiseworthy ambition), by showing 'the close relationship between the geology of our country and the traditional materials which go to the making of the pattern of English building.' So the book is arranged neither chronologically nor stylistically nor county-by-county, as architectural guidebooks generally are, but according to the materials from which the buildings are made. Some of the chapter titles give a flavour: 'Limestone', 'Tiles', 'The Unbaked Earths', and some of the running headings are even more enticing: 'The Varieties of English "Marble"', 'Whitewash and Applied Colour', 'Shingles and Weather-Boarding'. Reading the book, packed as it is with years of looking and learning, enables you to notice and appreciate details that would otherwise go unobserved.

He co-wrote books about stone and brick, and contributed essays on geology and building materials to eighteen volumes of Pevsner's monumental series The Buildings of England. He wrote about cathedrals and churches, notably English Parish Churches as Works of Art (1974), which, as its title reveals, again avoids trotting out the usual stylistic or chronological approaches in favour of a more original perspective. In it he concerns himself solely with whether buildings and their contents are beautiful or not; you can't read or listen to him for long without realising that he is a man of strong opinions about good and bad buildings. (To oversimplify somewhat, local materials = good, materials imported from elsewhere = bad.) I don't always agree with him - he never misses an opportunity to knock Victorian stained glass, for example - but he always argues his case knowledgeably and urbanely, and he always makes you look more intelligently and pleasurably.

Having waited till he was fifty-five to publish his first book, he left it till seventy before he became a television star. He presented a programme about Gothic architecture in the series The Spirit of the Age in the mid-70s, and this lead to his being commissioned by the BBC to write and present Six English Towns (made in 1977, broadcast the following year), which was an instant hit. This in turn lead to Six More English Towns (1981) and Another Six English Towns (1984), and he became a familiar and much-loved figure.**

Much of the success of the programmes can be ascribed to his genial charm. He's everyone's favourite grandad, abundant chalk-white hair sometimes crazily anarchic in the wind. He wears what looks like the same light grey suit for the majority of the eighteen programmes, daringly donning a rather dashing brown one for what proved to be the final episode.*** He talks with just enough of a patrician accent to give him authority but not enough to make him seem outdated or pompous. And he has the gift of talking at just the right level, using technical terminology but explaining it as he goes along without sounding patronising. He doesn't need any gimmicks (though he does have two little tics that can become a bit annoying once you've noticed them: he frequently and quite noisily sucks air into his mouth, sometimes mid-sentence, and occasionally he gets caught for a fraction of a second with mouth wide open and face contorted, especially as he emphasises something). He just talks, and occasionally gives a little demonstration (for example, of how pargetting is done in the programme on Saffron Walden), and the camera shows us what he's talking about. It's as simple as that. 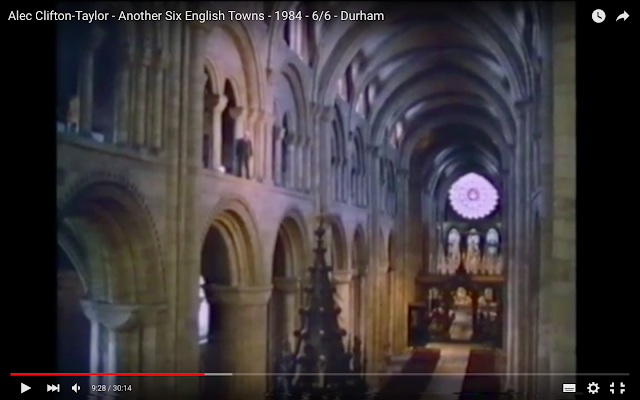 Except occasionally we see him clambering up scaffolding with astonishing agility for a man in his seventies, and once he is pictured perched vertiginously on the triforium gallery of Durham cathedral, a good forty or fifty feet up.

I've already mentioned that he wasn't slow to criticise when he thought it justified, and this has brought him the reputation among the ill-informed of being opinionated (in the pejorative sense); 'chirpy curmudgeon' and 'pontificating snobbery' are two phrases that crop up if you Google his name. This is wildly unfair. What emerges most strongly from his books and programmes is his love of and enthusiasm for good architecture. Although it's true he's not slow to excoriate ugly or out of place buildings or their details, and bad use of materials, especially those from the Victorian period and the 20th century, he is equally quick to give praise when he thinks it deserved, whatever the period. For example, he considers the Millburngate Shopping Centre (built 1972-76) in Durham to have filled an important site 'with tact and ingenuity.' The programmes succeed largely because he communicates his pleasure so infectiously, and we are encouraged and enabled to share his delight.

The programmes also succeed because they now have a period charm. In the programme on Saffron Walden he bemoans the amount of traffic in the town, but by today's standards it looks almost car-free. Music is used very sparingly, and is almost never played underneath speech. (One thing that irritates me about current documentaries is the seemingly incessant music, most of it distracting and unnecessary.) I want to put in a good word for Jim Parker's gorgeous, wistful piece for trumpet and piano, which features as the title music for the last series. The director isn't afraid of silence; the programme on Saffron Walden begins (after the title sequence) with eighteen seconds of near-silence: no music, no commentary, just distant birdsong. Eighteen seconds might not sound long, but current directors wouldn't risk anything like that, presumably fearing that the viewer would lose interest and turn over. The camerawork too belongs to a different, more leisurely age, often lingering over small architectural details for seconds at a time.

The series were issued as VHS tapes, and currently all eighteen programmes are available on Youtube**** (though they're very lo-fi). The first one is here. I find it hard to imagine a more pleasurable way of spending an odd half an hour (or forty minutes in the case of the second series) than sitting down and letting Alec Clifton-Taylor teach me how to look.


* The book went through four editions, the last, published posthumously in 1987, incorporating Clifton-Taylor's latest notes. It's easy to find secondhand copies on the internet, but it's currently out of print, a sad state of affairs for such a key book.

*** You can read an appreciative article (partly) about Clifton-Taylor by Jonathan Glancey, from the Guardian in 2000, here. In it he twice refers to Clifton-Taylor's Viyella shirt, tweed jacket and 'wobbly hat'; he's quite possibly right about the make of shirt - Clifton-Taylor favoured checks or single-colours - but he wears a tweed jacket in only a few episodes, and never I think a hat (he sports a black umbrella when it rains). Glancey is I suspect mixing Clifton-Taylor up with John Betjeman.

**** I've expressed qualms about the ethics of Youtube before. It doesn't seem so bad using it when the material you're watching or listening to is decades old (though the copyright laws don't agree), nor when the material was produced by the BBC, as if you're a licence fee payer you've already paid for it or at least contributed to it. Another factor to be taken into consideration is whether or not the material is available elsewhere. At the moment, the only other way of watching the Six English Towns series is by trying to find copies of the old VHS tapes (none seem to be currently obtainable), so watching them on Youtube doesn't harm anyone's income. But this is about to change. The first series is due to be released on DVD in September 2016 (not by the BBC, but by Simply Media). Wonderful that a new audience will have their eyes opened.

Posted by David Gouldstone at 20:12