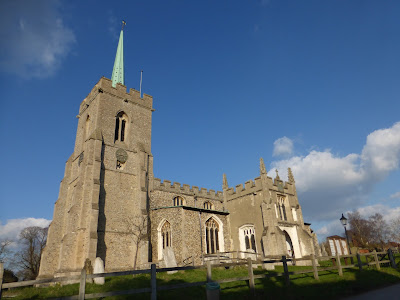 Braughing (pronounced 'bruffing') is a large, almost extravagantly picturesque east Hertfordshire village. Two of the three roads from the west ford the River Quin (though Ford Street, confusingly, has no ford), so you're likely to enter it scattering ducks amid sprays of water. The weatherboarding, half-timbering, pargetting and lime-washed plaster on display makes it feel as if it's wandered over the border from Essex, and it's certainly worth doing your own wandering around before, or after, you visit the church (which is open at all reasonable hours).

The church is large, impressive and handsome. Essentially it's 15th century* Perpendicular (all heavily restored in the 19th century), though the chancel has some unattractively squat lancet windows, hinting at its 13th century Early English origins, and the brick north chapel (now a vestry) is of c.1630. This chapel is in the style known as Gothic Survival**, that is, it  uses Gothic elements, in particular pointed arches, at a time when Gothic was thought by most educated people to be a thing of the barbaric past and the Classical style was supposed to be dominant. In fact, there's a more or less unbroken chain of Gothic buildings running from the Reformation in the 1530s right through to what are often seen as the beginnings of the Gothic Revival in the mid 18th century. The chapel, however, like a lot of Gothic Survival structures, is mostly interesting because it exists, and isn't much to actually look at. 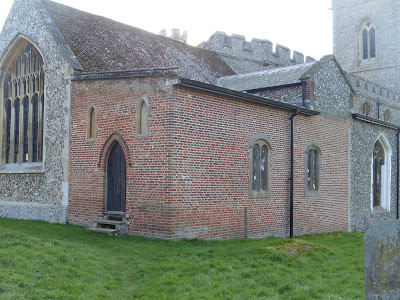 The tower has (according to Pevsner) 'a recessed spire rather than a spike'. How recessed does a spire have to be before it becomes a spike (a small, very sharply pointed spirelet)? I'll leave the subject of Hertfordshire spikes for another post another day. 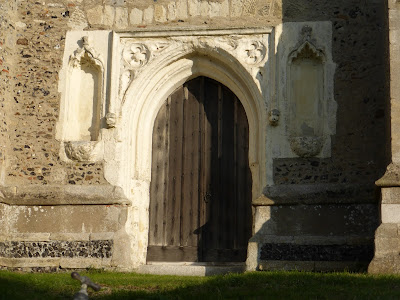 The west door of the tower is very similar in style to the porch; they must have been designed and built by the same mason. The niches would originally of course have contained statues of saints, pulled down by puritanical, or perhaps mere common or garden, vandals. Incidentally, isn't it strange how the names of the Goths and the Vandals, Germanic tribes that had large roles to play in the fall of the Roman empire, have come to have such different meanings? When their names were first invoked in the late 17th century they both connoted the savage, brutal destruction of all things beautiful and  the antithesis of civilised, humane values, but, while the unlucky Vandals (who were very likely no more barbaric than any other people of their time) still have this meaning stuck to them, the Goths have wriggled out of it. They've managed to give their name not only to a style of architecture, but also to a genre of literature and a teenage subculture.*** 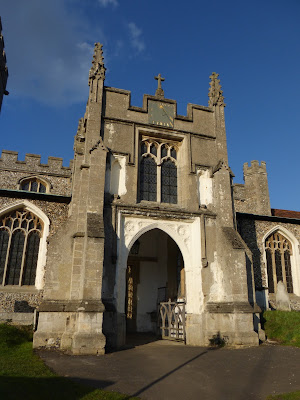 The porch is prettily pinnacled and elaborately decorated; it was obviously intended to impress, and was perhaps the gift of a wealthy donor who wanted to advertise his money, taste and piety, and to earn himself some time off Purgatory. It's much taller than the aisle (creating appealing skylines as you walk around the south); originally it was two-storeyed and had a parvise (an upper room, used perhaps for storing records and valuables, or as a schoolroom). The floor of the room is long gone, but mysteriously there's no sign of a staircase leading up; how was it accessed? You might notice that the door leading into the south aisle isn't central in the porch, being too far to the west. Is it possible that originally there was a ladder to the east of the door? 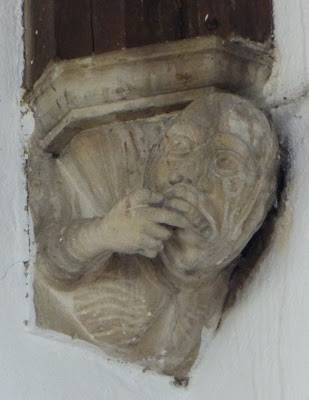 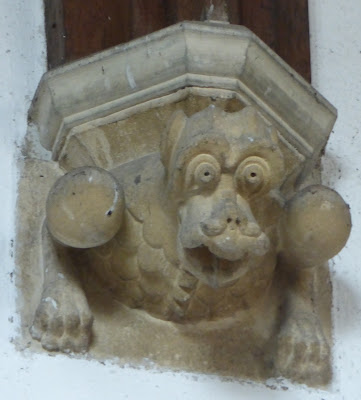 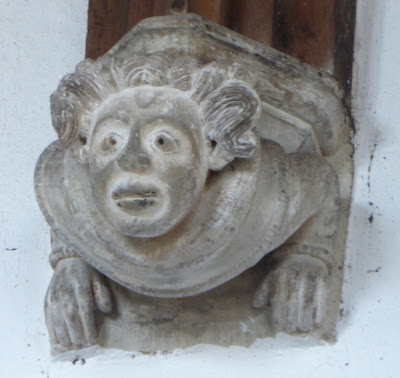 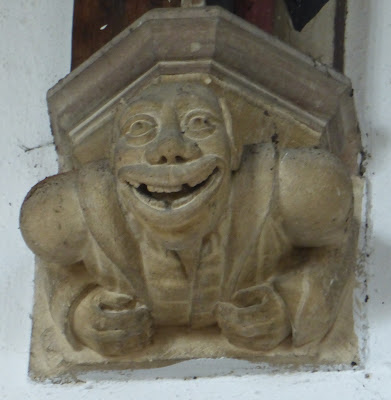 Look up when you go through the asymmetrically-positioned door to see wooden angels and stone corbels. The former all have similar proud, rather snooty faces, while the corbels are all individual. The first photograph above shows a man apparently cowering in terror, perhaps from the nightmare figures of some of the other corbels, such as the second photo. The third shows someone staring intently, and the fourth a man grinning, manic and gap-toothed.

I think that the first and third photos above show original 15th century carvings, while the second and fourth look as if they date from the 19th century: the carving is still crisp and unworn, and the stone is that urine-coloured variety (a type of sandstone?) so often favoured by Victorian restorers. In this instance, the work of the Victorian sculptors stands comparison with that of their medieval colleagues. 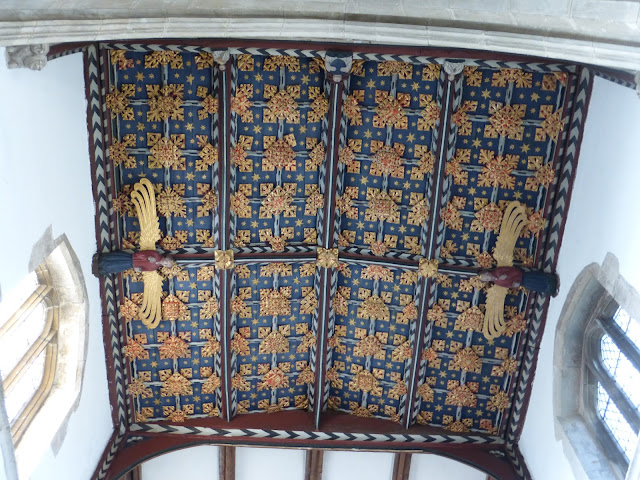 The easternmost bay of the nave roof is richly painted; the angels, golden wings outstretched, seem to be lazily soaring in the starry welkin. 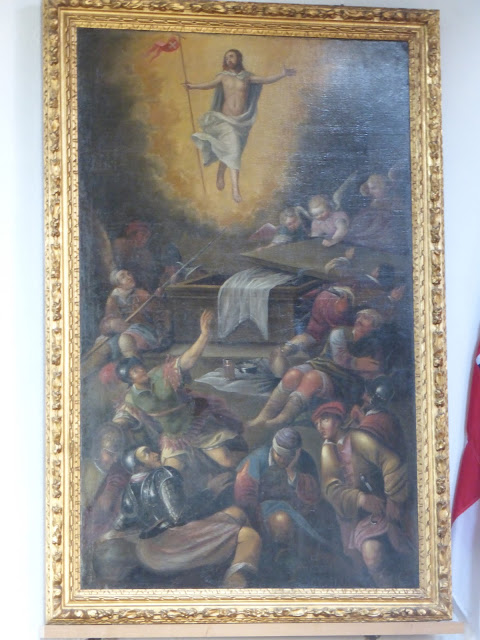 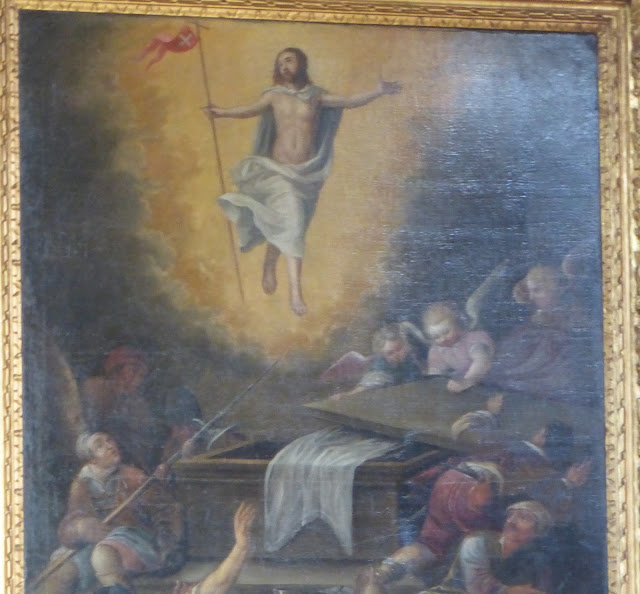 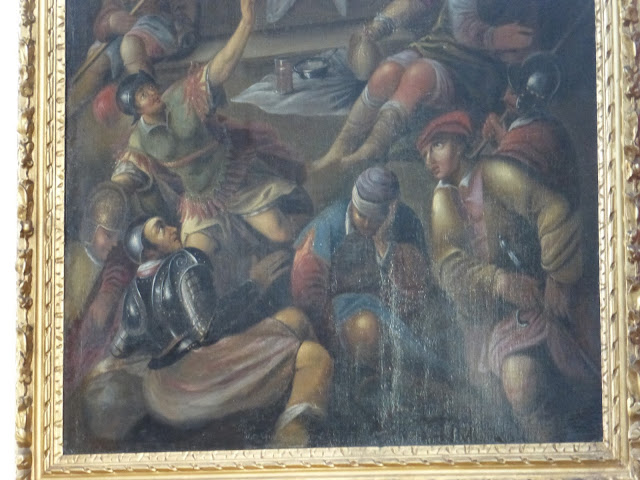 On the north wall of the nave is a large oil painting of the Resurrection****. Although it's not art  gallery quality, it's much better than the usual easel paintings found in parish churches, and it's frustrating that so little information seems to be available about it. I'd guess that it's 17th century north European, maybe Flemish. Or could it be a later, perhaps 19th century, imitation? The angels moving the tomb slab are feeble - they look like grumpy children with fancy dress wings in a bad society portrait - but the soldiers in the foreground are quite dramatic. The one at the bottom left, for example, successfully conveys a sense of awe, and his armour is skilfully depicted. My notes from my first visit to the church in 1993 say 'The faces remind  me of a picture I can't quite place', and 23 years on I still can't place it. 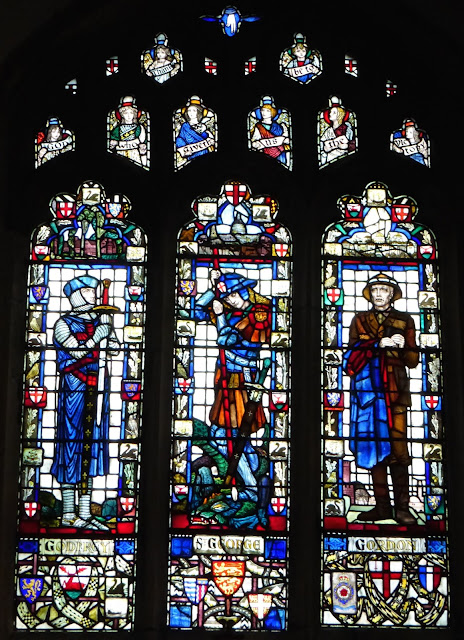 In the east window of the south aisle is a First World War memorial (its designer and maker seem to be unrecorded), though specific references to the war are very discreet. The central figure is St George, and on the left is Godfrey, presumably Godfrey of Bouillon, one of the leaders of the First Crusade and the first ruler of the Kingdom of Jerusalem. On the right is Major-General Charles Gordon ('Gordon of Khartoum') (1833-85). In 1918 Godfrey and Gordon could still just about  be unequivocally admired, but they're much more ambivalent figures nowadays. The Crusades can no longer be seen as noble endeavours, and Gordon's associations with empire and colonialism, among other things, have stained the almost saint-like reputation he had in late Victorian and Edwardian times. Nevertheless, I like the bright blues and reds and all the incidental details at the top, sides and bottom. Above Godfrey we see what looks like a country house by Lutyens, and above George St Paul's cathedral. (Gordon has a walled city with domed buildings, probably representing Khartoum, during the siege of which he died.) 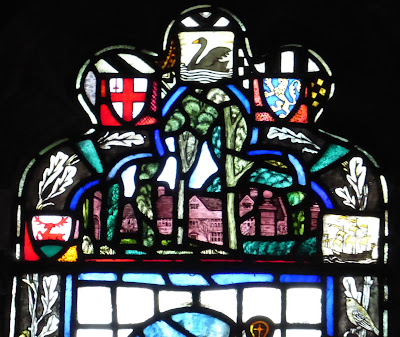 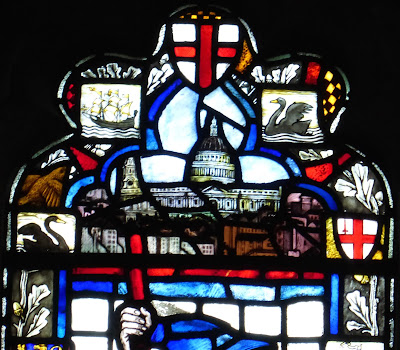 The chancel is the highlight of the church for anyone, like me, who enjoys funerary monuments. There are two large ones, and several smaller (but the chancel is a bit gloomy, so try to see them on a sunny day). 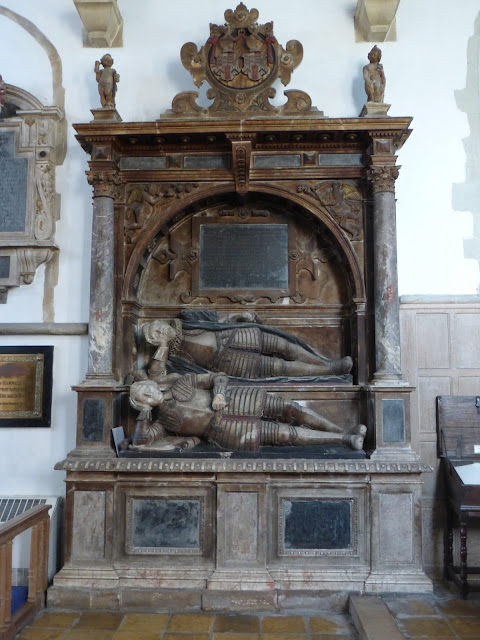 This monument to John Brograve (d. 1625) and his younger brother Charles (d. 1602) is against the north wall. They both wear armour, though the figure at the top (I assume John) has a cloak and a ruff too; his elbow rests on a cushion, while his brother has to lean on a shield; most uncomfortable. The elder brother also has military emblems by his head and feet (not visible in these photos). 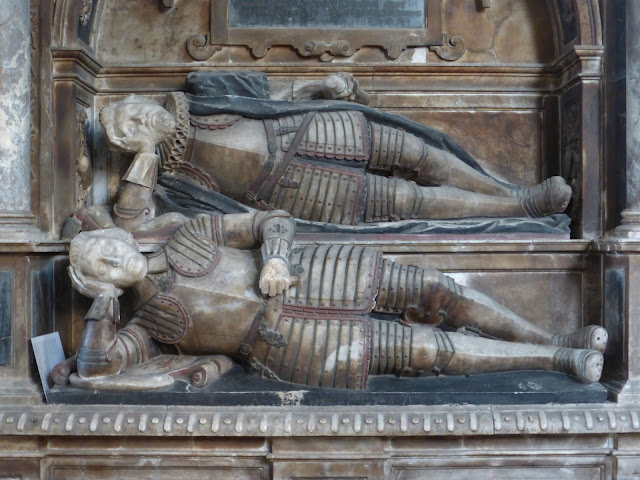 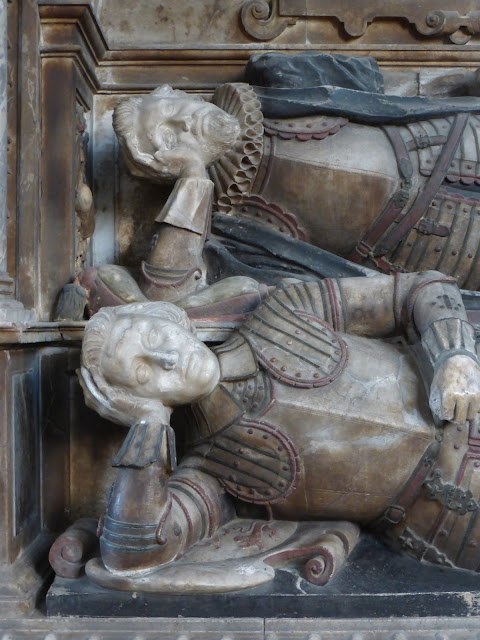 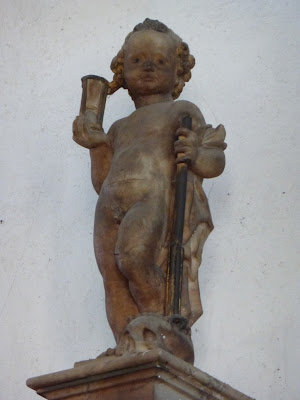 At the top two small putti flank the heraldic cartouche. The one on the left holds an hourglass in his right hand, and has his foot on a skull. But what is the stick-like thing in his left hand? 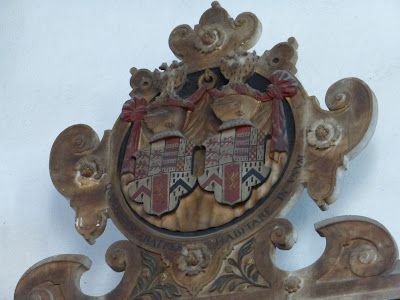 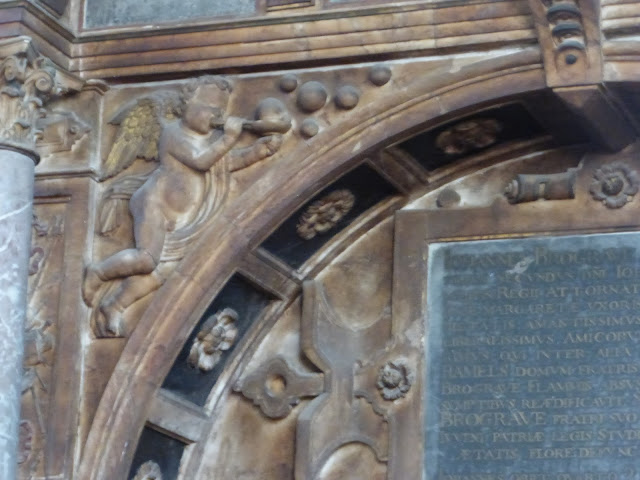 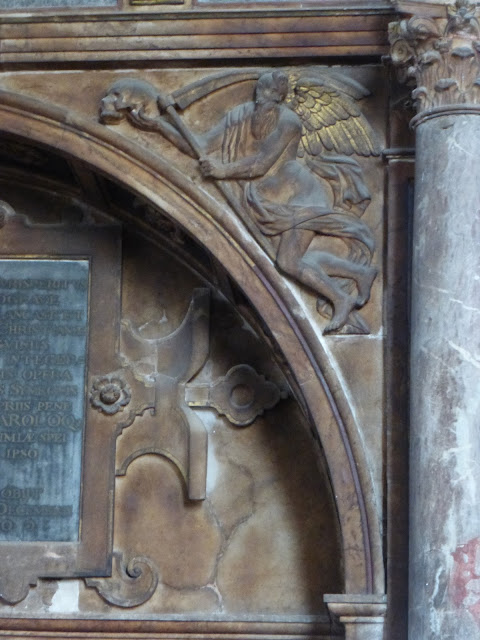 The left spandrel has a figure of a putto blowing soap bubbles, a symbol of the brevity and uncertainty of life. I'm reminded of the Seven Ages of Man speech from As You Like It (written about 25 years before this tomb was erected), in which Jaques speaks of the 'soldier . . . seeking the bubble reputation/ Even in the cannon's mouth.' I wonder if the Brograve brothers-in-arms ever faced cannons. 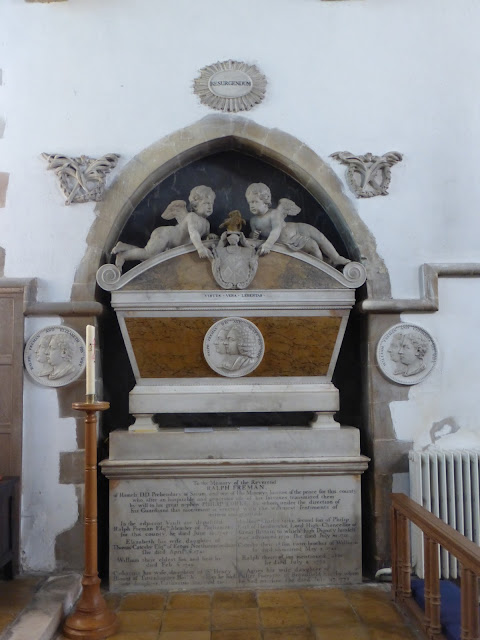 The Brograve monument is almost too elaborately decorated, which isn't a charge that could be laid against the austere one to Ralph Freman (d. 1772), which faces it across the chancel. This also commemorates his wife and two other relatives and their spouses. The three low-relief portrait medallions (earlier monuments would have used three dimensional sculptures) are well characterised,  and the use of contrasting marbles is effective, but altogether its stately elegance is too steely. The putti on top, apparently holding the heraldic cartouche, look awkward; the one on the left looks as if he's anxious about slipping off. 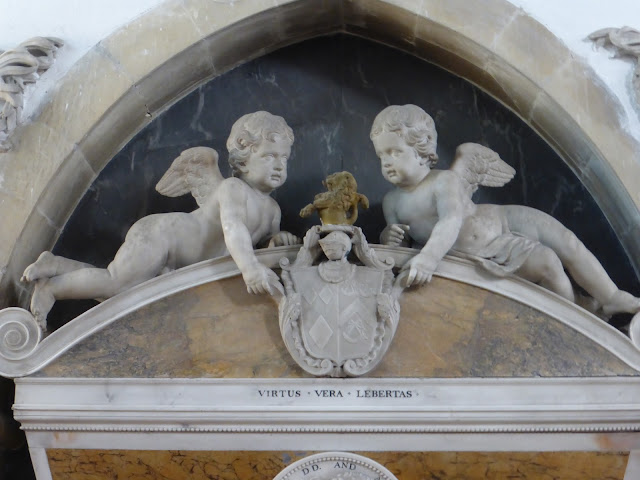 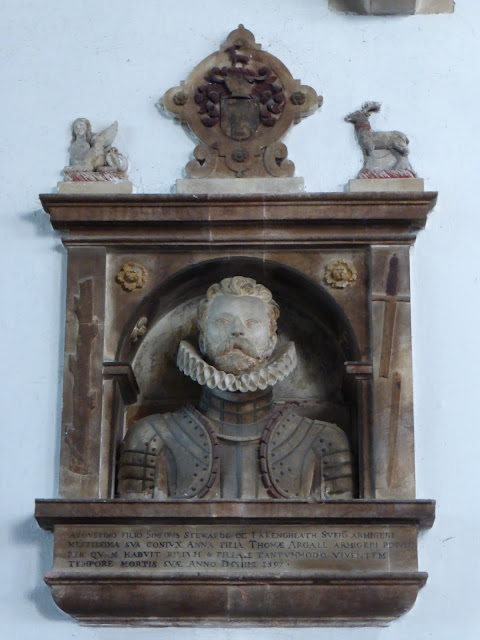 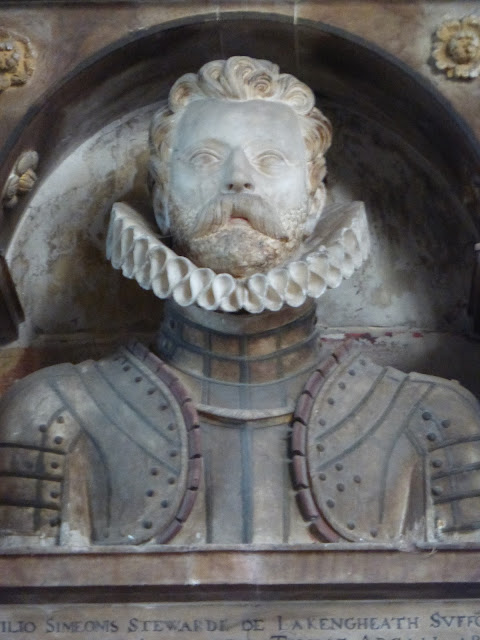 This monument commemorates Augustin Steward (d. 1597); his armour and ruff are as stiff as a surgical collar. On the top are a sphinx (probably intended as a symbol of wisdom) and a stag or hart, on the left a rootless, branchless tree, and on the right a broken sword, both symbols of life cut short. 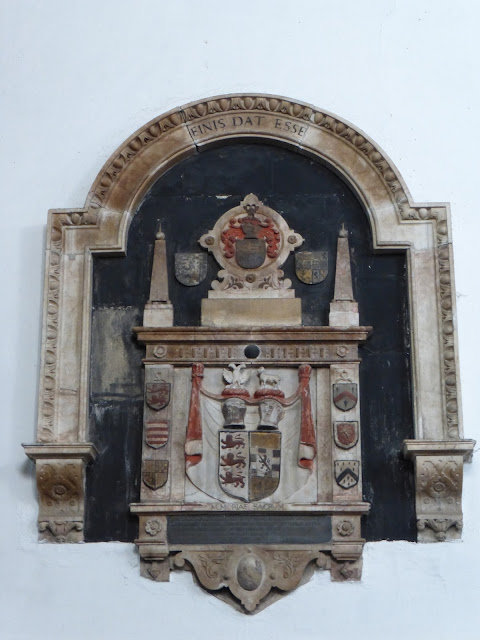 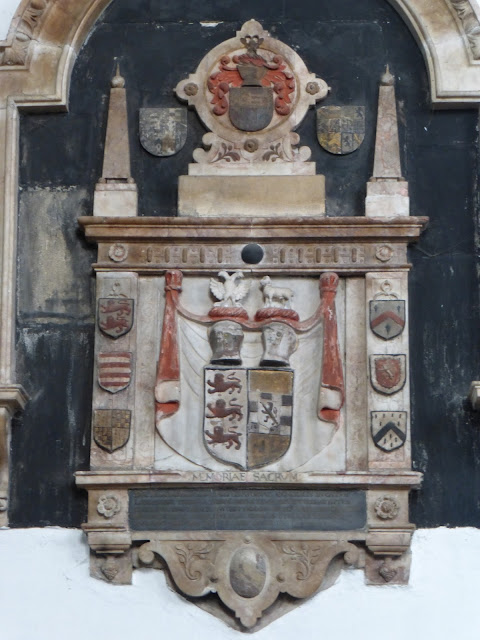 This heraldic monument commemorates Sir John Brograve, d. 1593, presumably the father of John and Charles. Whoever erected it (probably the sons)  was evidently very concerned to establish their aristocratic antecedents. Heraldry often includes odd details, and here it's the two-headed cockerel on the left helm. 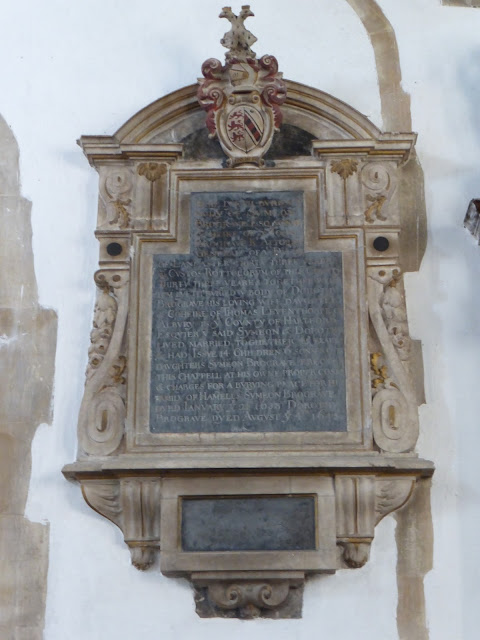 There's one last Brograve monument, to Simeon (d. 1638); it has a proto-baroque air about it. The main plaque isn't rectangular but irregular in shape, and on either side are scrolls and fruit (pomegranates?). The rectangular plaque at the bottom was probably intended to record the death of another family member, but for some reason has been left blank. At the top of the monument is another double-headed cockerel.

The Brograves may have vanished like soap bubbles, but their monuments and the church that shelters them remain.

* The Victoria County History suggests c.1416, citing as evidence a will of that date leaving £5 for the building of the church. But surely even six hundred years ago £5 wouldn't have bought you very much architecture, and for all we know the money could have been intended as a contribution to a planned building, which might not in fact have been started for decades, or to pay for some improvement to the completed church.


** 'Gothic Survival' is often a misnomer, implying as it does that the style survived just because provincial builders didn't know any better. Many so-called Gothic Survival structures are very likely examples of the early Gothic Revival, in other words the builders took a conscious choice to build in that style. However, the simplicity and naivety of the Braughing north chapel makes me think that it probably is an example of a genuine style survival.


**** It doesn't appear on what used to be the Your Paintings website, which has recently become Art UK, which includes all the publicly owned oil paintings in Britain, presumably because it's owned by the church, which doesn't count as public ownership. The site doesn't seem to include paintings owned by the monarchy either.