This is part two; you can read part one here.

At some time in the early 17th century the church was partly refurnished, and a new door was added on the north, squeezed uncomfortably between two windows, presumably to make access easier for the inhabitants of Wyddial Hall, which lies just to the north of the churchyard.

The door, together with the two flanking windows, provides an interesting lesson in design from the late medieval period into the English Renaissance. (Well, I find it interesting, and if you don't, dear reader, you're reading the wrong blog.) The window to the right of the door is 15th century, and has been reused (presumably from the original north wall of the nave). The two arches are pointed (though not very) and cusped. The window to the left is of 1532, the arches are still pointed, though if anything even less so than that of the first window, and the cusps have disappeared, showing the beginnings of a classicising spirit. Brick was a relatively modern material. The door, on the other hand, is once again of stone (brick wouldn't have suited the dignity of the minor aristocrats who entered it) and austerely, assertively classical. The family who commissioned it would have been keen to advertise their keeping up to date with the latest styles. 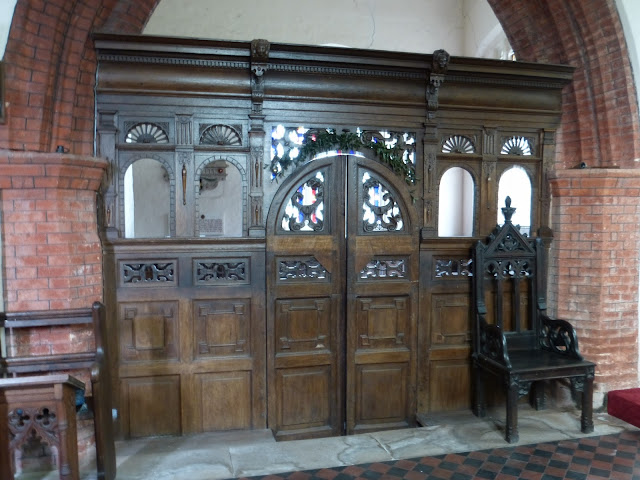 Round about the same time as the door was built, screens and box pews were installed in the north aisle, turning it more or less into a private family chapel. 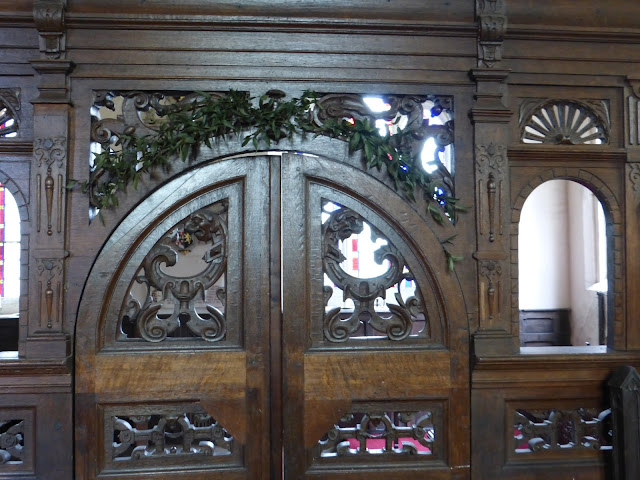 As you can see, the screens are a fantastically fecund display of Jacobean inventiveness. (The one under the tower is an extremely convincing late Victorian or Edwardian pastiche.) However, the box pews, which were definitely there in 1953 when Pevsner visited, and perhaps still there when Bridget Cherry revised the Herts Pevsner in 1977 (can we assume she visited every building? Probably not) were equally definitely gone by the time I first visited in 1992.

How could this have been allowed to happen? As I understand it, the addition or removal of fittings in churches is subject to strict overview and regulations. The loss of the Wyddial box pews is a serious blemish on the record of the Diocese of St Albans.

By the later 17th century the family living in the Bury were the Goulestons (the exact spelling varied); I'm not sure exactly when they arrived and if they were responsible for the door, screen and pews. The similarity of their name to mine interests me (though in this case I'll entirely understand if it fails to interest anyone else). There are three wall monuments, and several brasses and ledger stones, commemorating them in the north chapel. 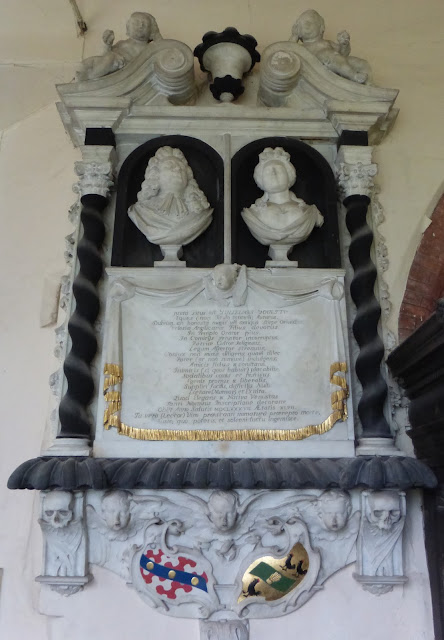 This is the grandest monument in the church, to Sir William Goulston, who died in 1687. 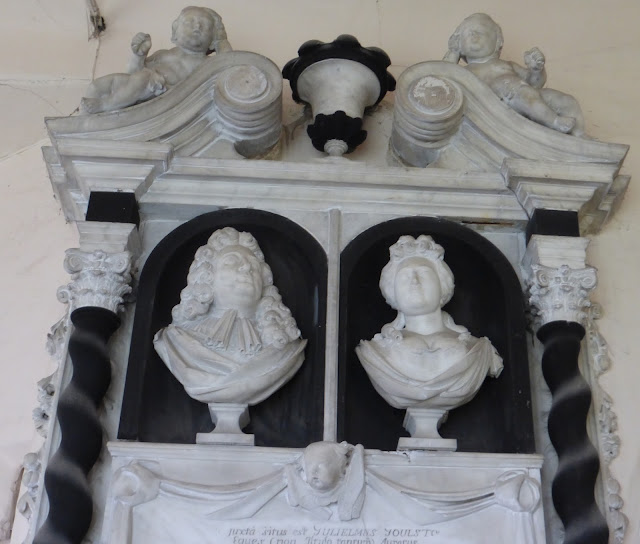 A pair of putti loll languidly at the top, looking as if they're on sun loungers by a pool. The busts are somewhat characterless, but the overall effect is impressive, as of course it's meant to be. 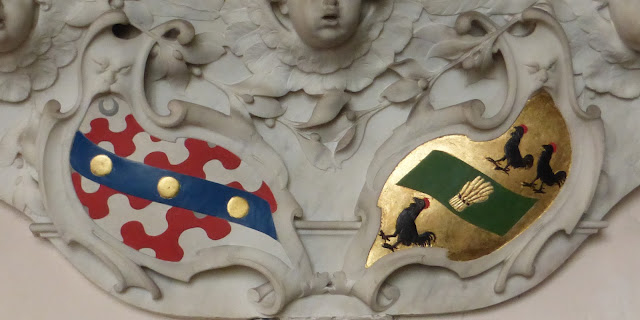 Easily overlooked details are the two armorial cartouches at the bottom, which morph into Mannerist grotesque faces. Everything else about the monument is standard for its date, but these faces are quite extraordinary. 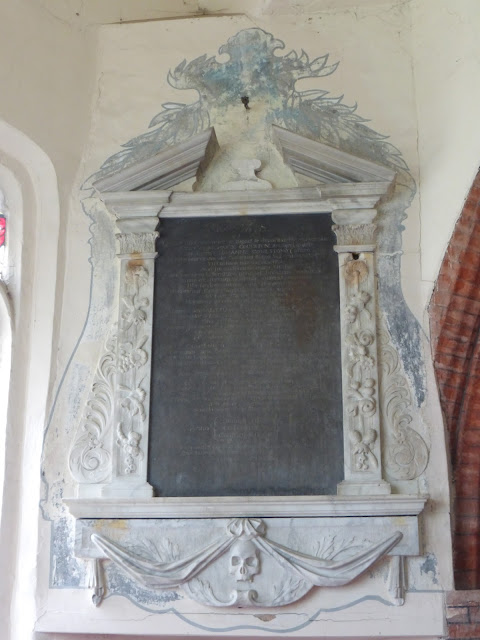 The monument above is to Richard Goulston, (though his name is spelt Gouleston on the accompanying brass), who died in 1686. It's lost its surmounting heraldic device, but has a painted (now faded) additional background on the surrounding wall. I don't remember seeing something like this elsewhere, though I can't believe that this example is unique. The monument must have been very expensive, but presumably the painted background was an attempt to make it seem even grander at minimal cost. I like the cheek of these Goulestons. 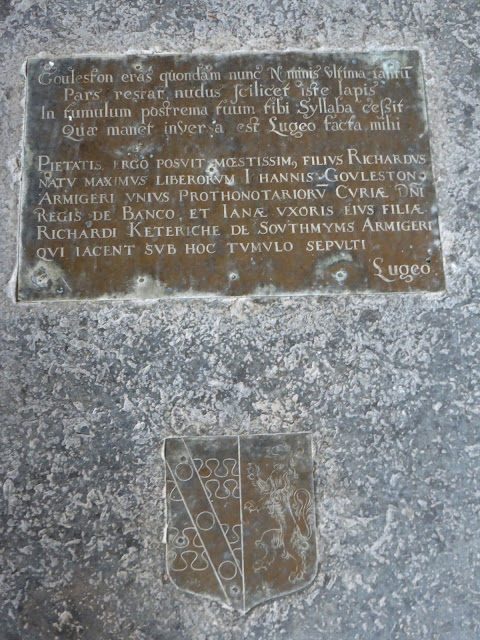 This is the brass on the floor. The first four lines are a Latin poem; my Latin isn't up to much, I'm afraid, but I recognise the word 'lapis', stone, as in lapis lazuli (a blue semi-precious stone) and lapidary (noun: one who works in stone, adjective: carved in stone). With a little help from Google Translate it's possible to work out a rough and partial English version; the key bit is 'only the second syllable, stone, remains now', punning on Gouleston[e]'s name. Furthermore, the word 'lugeo', I mourn, which features in the poem and is repeated at the end of the inscription, is an anagram of Goule, the first syllable of his name. It seems that the Goulestons, as well as being partial to grandeur on the cheap, were early crossword puzzlers, a trait I can sympathise with as I enjoy a tussle with the Torygraph and Guardian setters myself. 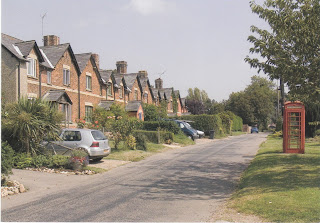 Now the church is happily open to visitors after decades of inaccessibility, greetings cards are on sale, a pound for a pack of four: outstanding value. Of the four cards, one is a good picture of the (not very interesting) south side of the church, two are excellent pictures of the stained glass, and the last I reproduce above. When deciding what to portray on the fourth card, whoever made the choice ignored the claims of the other six windows, the north aisle, the screens and the monuments (including others I haven't mentioned) and plumped for this view instead. A decision almost as bizarre as the decision to throw out the Jacobean box pews.

Posted by David Gouldstone at 12:16