Some Hertfordshire churches used to be generally open but are now difficult to get into: Bengeo, Bygrave, Flamstead*, Hunsdon, Kings Walden, Knebworth, Offley and Walkern, to name a few. Happily, Wyddial has reversed this trend. I managed to gain access once in 1992 (after some quite lengthy amateur detective work to hunt down a key), but since then, despite stopping while passing at least half a dozen times over the intervening years, I didn't get in again until early this summer. And it was no fluke, as I've been back since and it was once again open. Its custodians have evidently decided to share their church with the wider world. I thank them, and hope others follow their example.

Wyddial (pronounced, I believe, WID-dee-uhl) is a tiny village of only about thirty-five houses - some of them admittedly quite grand - set in the rich, rippling farmland of the Quinn valley east of Ermine Street (now rather more prosaically known as the A10). Many of the lanes here have unexpected sudden right-angled bends, presumably inherited from ancient (perhaps Saxon) field boundaries; there are two in quick succession as you leave the village for Buntingford to the south-west, a razor-sharp left followed by an almost as keen right. Reed church, just a few miles to the north, preserves some late Anglo-Saxon architectural features from roughly the same period, but Wyddial church is no older than the 15th century. And, like a lot of Hertfordshire churches, at first sight it seems even newer, being built mostly of flint, which doesn't weather and age, and having been restored (or largely rebuilt) in the 1850s.

To pass it by because of this initial impression would, however, be a mistake. Most of the considerable interest of the church is to be found on the north side, invisible from the road. The brick aisle and chapel date from 1532, and thus must be among the last church buildings to be erected before the Dissolution of the Monasteries began just four years later. (Church building slowed down drastically for the next sixty or seventy years, though it never completely died out, before picking up again in the early 17th century.) 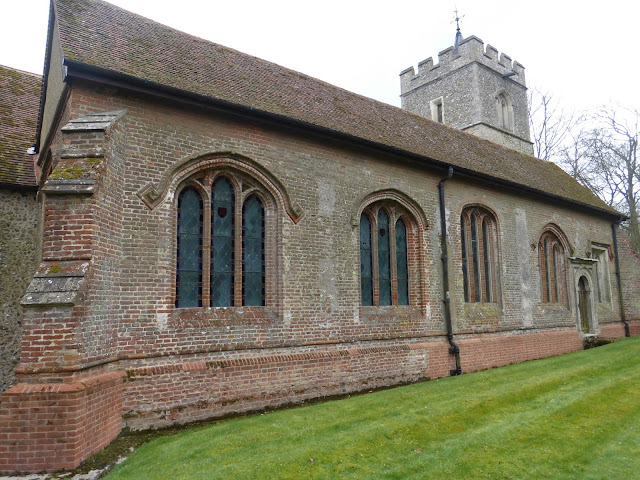 Brick church buildings in Herts are a rarity; the only other one of the same period is the porch at nearby Meesden. The aisle at Wyddial is a treat, the warm red colour a hundred times more attractive than that of anaemic modern bricks. Inside, there are brick columns and arches, a grand display of shaped brickwork (though I'm not fond of the black mortar). 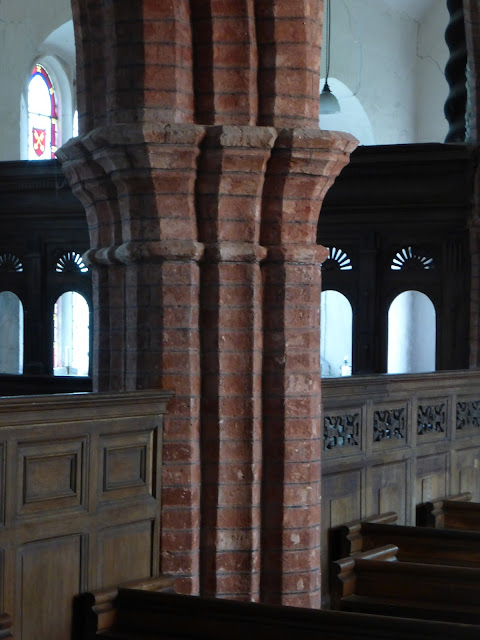 The north windows of the aisle contain eight panels of Flemish glass, probably a few decades later, depicting scenes from the Passion of Christ. They're faded and abraded, in places to illegibility, but there's still plenty to enjoy. They were restored in 2008. The day I was there with a camera, screens with a display about the history of the village were positioned in front of the windows, and I had to move them in order to see the glass. While of course it's good that such information is provided for visitors, it's odd that one of the main attractions of the church should be thus obscured. 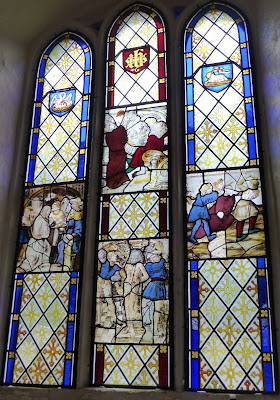 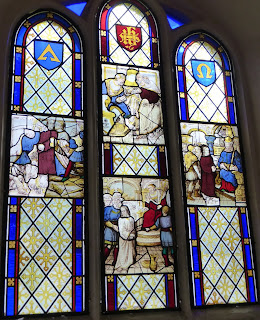 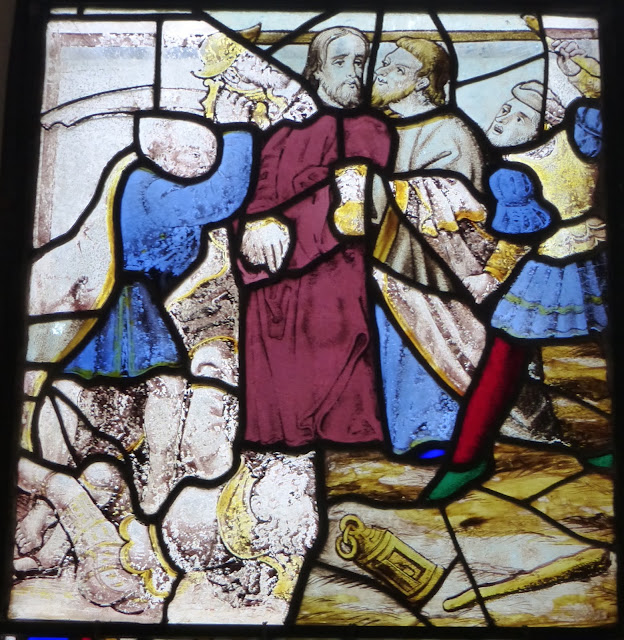 The narrative begins with the arrest of Jesus. Jesus is placed centrally; the artist has tried to make him look holy, but has succeeded only in making him appear a bit dopey. He's wearing the purple robe that he'll only later be given by the soldiers as part of their mockery of him, thus telescoping together two parts of the story. Judas is on his right (from our perspective) and is either about to or has just kissed him in order to identify him to the guards. Judas is elaborately dressed and clutches his thirty pieces of silver; his face is tender despite his duplicitous little smile. On his right one of the guards, with sword or club upraised, is poised very dramatically to make the arrest. He's dressed in stylish Renaissance costume and armour, and at his feet a lantern and club have evidently just dropped to the ground, bringing immediacy to the scene.

The right half of the panel is very much better preserved than the left. Behind Jesus and on his left another guard lurks (identified by his helmet). Peter is depicted as an action hero with sword about to cut off the ear of Malchus, the high priest's servant. Sadly, he isn't well preserved, but you can make out that his head is shown upside down as he sprawls bottom left. 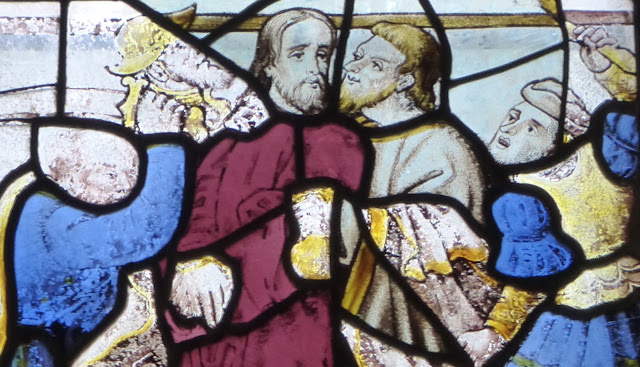 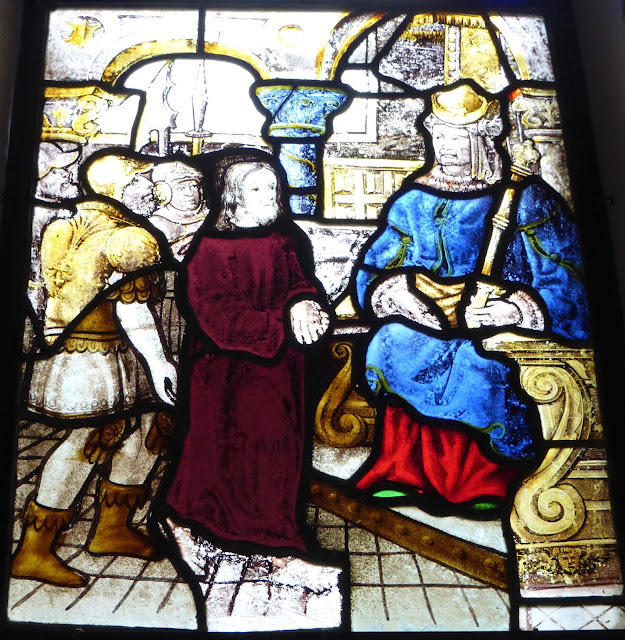 The next picture in the sequence shows Jesus (his hands probably bound) before the Sanhedrin, the Jewish supreme court, being examined by either Caiaphas, the high priest, or Annas, his father-in-law (depending on which gospel you rely on). The judge sits on an imposing throne and holds a sceptre. The three soldiers don't look especially threatening despite their halberd and spear; one of them even seems to be giving Jesus a friendly pat on the bottom rather than brutally pushing him forward. I do like the soldier's boots, which make him seem like one of Robin Hood's Merry Men. The architectural details are depicted in unusual detail: even the wall panelling behind the judge can be clearly seen. 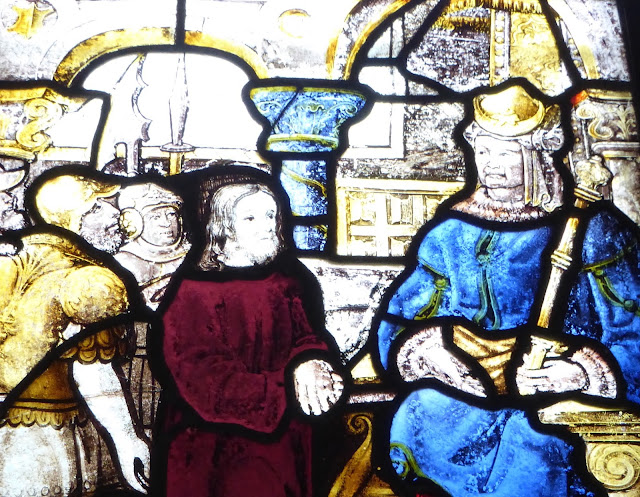 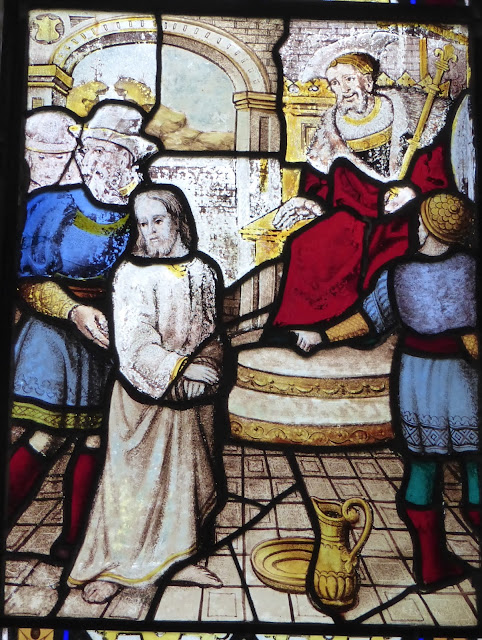 Jesus, now wearing a white rather than purple robe and with hands visibly bound, is taken before Pilate, the Roman prefect. Pilate has a fur-trimmed cloak and an elaborate headdress; his expression is concerned. Below him there's a very well preserved figure of a soldier with his back to us; the details of his armour and the decoration on his tunic are remarkable. He points to Jesus, who now looks dignified; his bare feet make him seem vulnerable. Through the arch top left there's a glimpse of landscape. 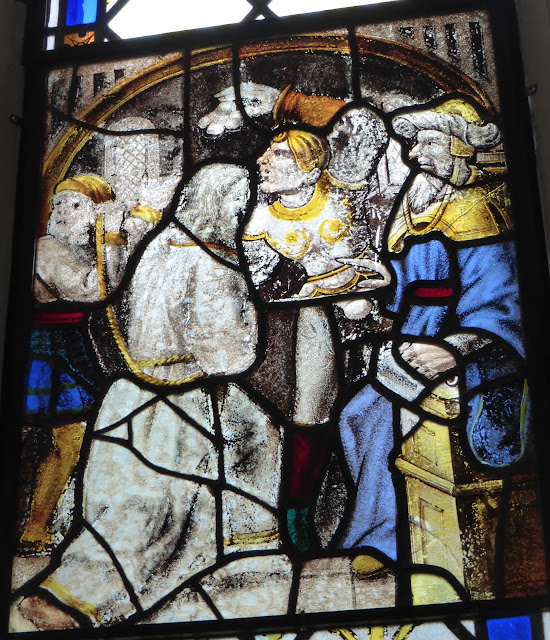 I think this scene depicts Jesus before Herod, who looks suitably villainous; his headdress is even more imposing than Pilate's, and he's sneering; this is perhaps the best characterised face in the whole sequence. Jesus is half-kneeling and has a rope tied around his waist, the other end of which is held by a faded but gormless soldier. The central soldier is wearing splendid Renaissance armour, but what is he holding over Christ's head? I assume it's something related to the mocking of Christ, but I can't make out exactly what. This scene takes place in a gloomy interior, which makes it seem all the more sinister. 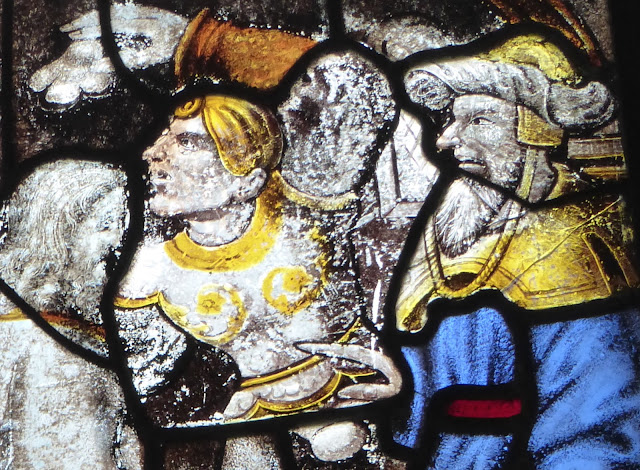 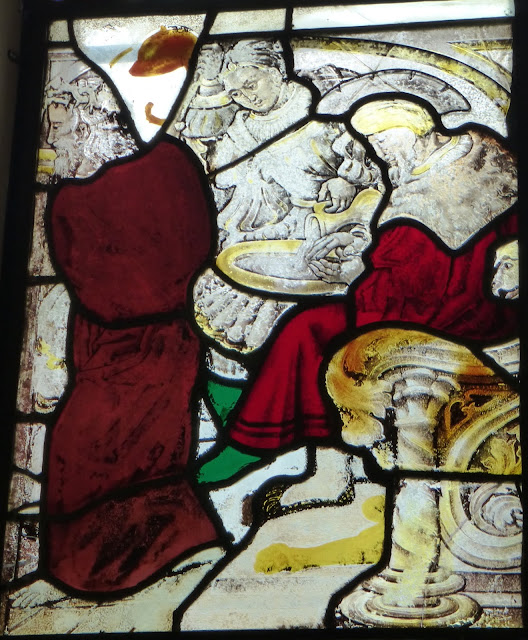 Jesus, back in purple, is now once more before Pilate, who washes his hands to signify that he will no longer be involved. Jesus, wearing a crown of thorns, turns away as if resigned to his fate. Pilate's servant, pouring water into the basin, seems to be affected and steals a glance at Jesus. 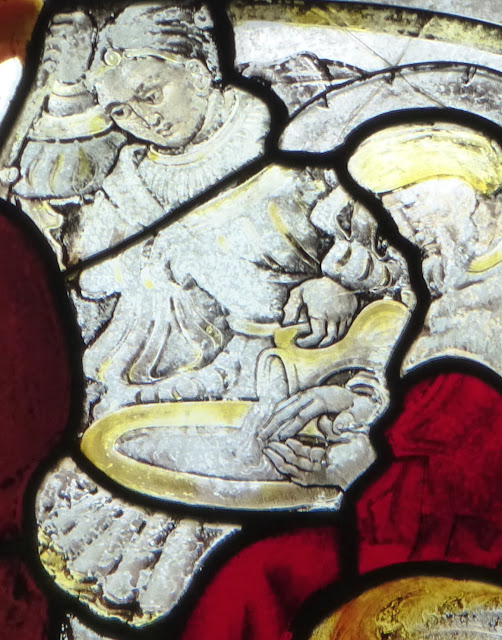 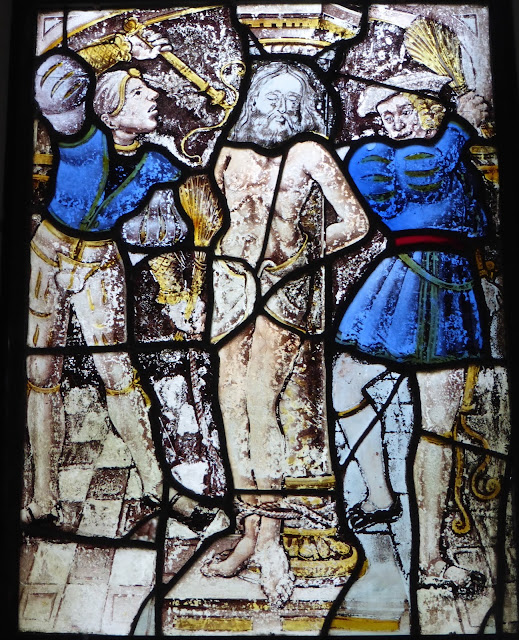 When I saw this flagellation scene in 1992 I noted that Jesus's face was faded almost to invisibility; its present appearance must be the result of the recent restoration. He is almost naked, his eyes are stoically closed and he certainly arouses our sympathy. The soldier on the left doesn't seem very fierce, and his legs are unconvincingly depicted. The figure on the right is apparently dressed in high status civilian clothes and looks much more sinister; he's standing contrapposto with his weight on his left leg as he vigorously lashes Christ.

Both the assailants have red details on their predominantly blue costumes; the figure on the right for example has slashes on his sleeve to display the bright red material beneath. I'm not sure how the makers of the glass accomplished this; could it be by enamelling or flashing? Neither of these explanations seems convincing. 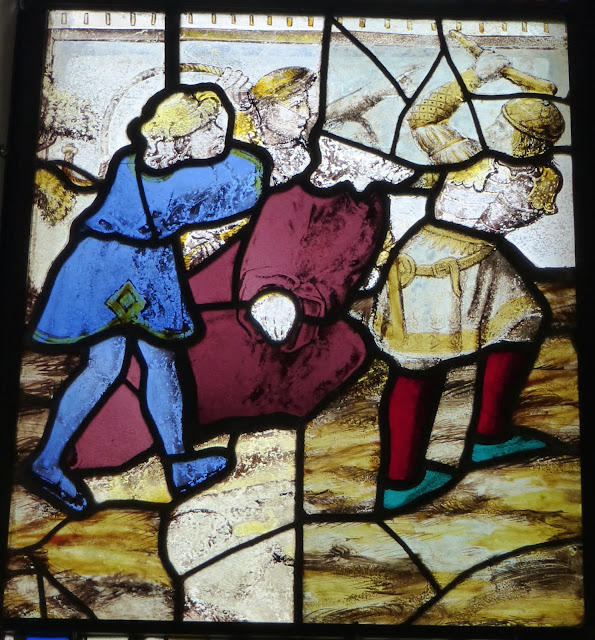 I'm not sure exactly where this panel comes in the narrative sequence. My first thought was that it shows the road to Calvary, but I don't think that can be the case as Jesus is still wearing his robe - he would be naked - and he's not carrying the cross. Presumably it shows him being taken to one of his inquisitors, probably Herod. The scene is open country (there's a glimpse of a tree on the left) and Jesus is being beaten by a civilian and a soldier, who's painted meticulously. A third figure behind him is pointing. 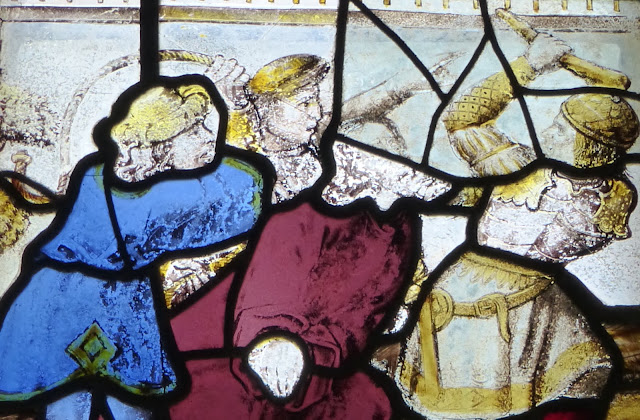 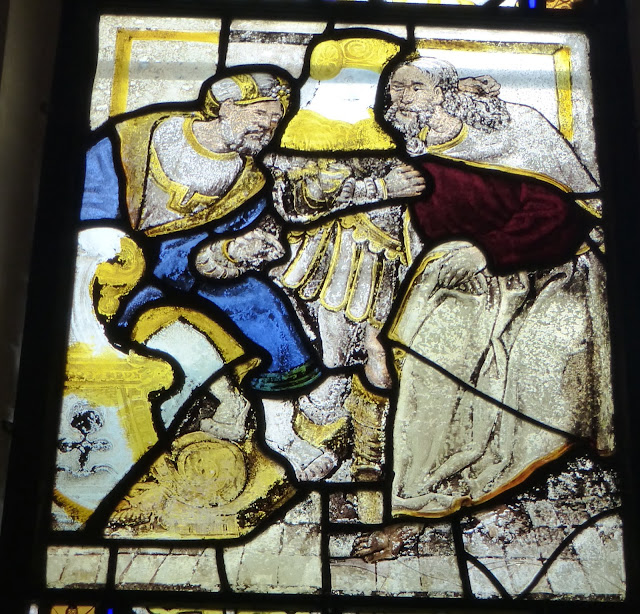 I can't identify the subject of this panel. Three men - the face of the one in the middle has badly faded, though his headdress remains - confer. They're all expensively dressed, and the one on the left sits on a throne. The outer two are leaning in as if speaking urgently, and the central figure has his arms around the man on the right; perhaps he's restraining him as the argument is getting heated. The two visible faces, and especially the one on the right, are beautifully characterised. I assume this scene shows Jewish elders discussing what should be done with Jesus. 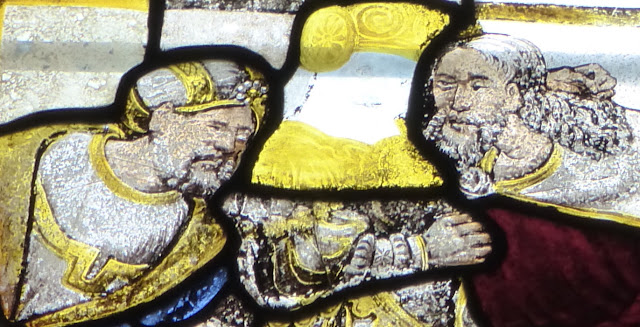 I think this glass deserves to be better known. Neither of the modern guides to stained glass in Britain (by Painton Cowen and June Osborne) give it more than a very brief mention. (Being hidden away for many years in a locked church didn't help.)

How did the glass come to be in Wyddial? It's unlikely that it's in situ (authorities disagree on its exact date, but if it's mid to late 16th century it can't have been installed when the aisle was built in 1532). Probably it was bought by a local gentleman - perhaps the inhabitant of nearby Wyddial Hall - on his Grand Tour. There was a large supply of continental stained glass available in the first decades of the 19th century, as a result of the Napoleonic wars and their aftermath, and this is the likeliest time for its arrival in Wyddial. But more research would be needed to make this more than an educated guess.

You can read part two of this post here.


* To be fair, the last time I visited Flamstead key holders were listed, and someone arrived to open up minutes after I phoned. But all the others I've mentioned were, on my most recent visit or visits, impenetrably locked.
Posted by David Gouldstone at 13:02