I asked: what is the connection between Stanley Spencer's painting 'Patricia at Cockmarsh Hill' and Gilbert and Sullivan.

In 1911 Ruby Preece, 17 years old, and Winifred Emery, her teacher despite being only 21, went for a swimming lesson with W.S. Gilbert in the lake in the grounds of his house, Grim's Dyke, Harrow Weald, then in Middlesex (north-west London). Gilbert, then 74, was a friend of the Emery family.

Preece and Emery entered the water before Gilbert, and Preece, getting out of her depth too quickly, called out in alarm. Gilbert dived in to rescue her, but had a heart attack and died.

Some time after this Ruby changed her name to Patricia, and met the woman who was to be her lifelong companion and lover, Dorothy Hepworth, at the Slade School of Fine Art. In 1928 they moved to a cottage in Cookham, Berks, where Stanley and Hilda Spencer and their two daughters were living. Spencer became infatuated with Preece, lavishing her with expensive gifts and painting her many times (including 'Patricia at Cockmarsh Hill'), and eventually divorced his wife and married her in 1937.

However, it seems that she never had any intention of being his wife in anything other than a financial sense. They never spent a single night together after the wedding, but she persuaded him to make over his house (in which Hilda and their daughters were still living) to her, and to put all his business affairs in her hands. This was, naturally enough, financially and emotionally ruinous for Spencer, not to mention his wife and children.

So you could say that Patricia Preece was the downfall of two important artists.

Financially and emotionally ruinous, but not, thankfully for posterity, artistically ruinous. Out of this disastrous relationship came masterpieces such as the famous nude portraits, and had Spencer's life not gone careering out of control then we wouldn't have such intensely meditative and troubled paintings like the Christ in the Wilderness series. 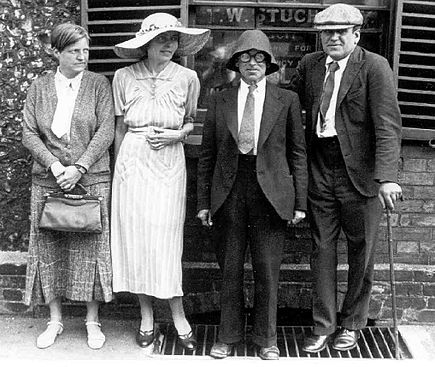 The photo above is of the happy couple, standing in the centre, with Dorothy Hepworth on the left and Spencer's best man, Jas Wood, on the right, after the wedding in Maidenhead. A novel could be written about the emotional implications of this picture (and perhaps it already has). Spencer looks pleased with himself, but although he's obviously dressed himself up in a suit his lack of height, goggly glasses and, most of all, shapeless sunhat all conspire to make him look horribly, almost comically, out of place and out of his depth. Preece's left arm, and indeed her whole body, is doing its best to keep as far away from him as possible, and as for Hepworth, the phrase 'if looks could kill' might have been coined especially for this moment. Only Wood looks at ease. What on earth was going through his mind?

It's said that Hepworth was too shy to try to sell her paintings under her own name, and that Preece often signed them and sold them as her own. There are nine oil paintings attributed to Preece in British public collections (see here), some of which are pretty good; I wonder though if they're actually by Hepworth.

I used to play second alto in a big band, and we once had a gig at Grim's Dyke (now a hotel). I made a point of going to see the lake where Gilbert died, but it's disappointingly not much more than a muddy pond now.

Posted by David Gouldstone at 17:59