Saints and angels - a font in Ware church, Herts 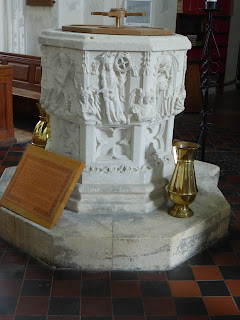 The church of St Mary the Virgin, in Ware, Herts, is big, and evidently no expense was spared on it when it was built (mostly in the 14th and 15th centuries). It has transepts - fairly unusual for a parish church - and - even more unusually - the nave, transepts and chancel all have clerestory* windows. It was quite heavily restored in the 19th century, which must have neutered or at least changed its character. (We ought to be grateful to the Victorians for rescuing so many churches from dereliction rather than routinely reviling them. Even though sometimes they did replace and alter too much, on the whole I think the balance is in their favour.) The interior isn't as grand (though the nave arcades are taller than in an average church) or as full of interest as the exterior suggests it should be, but there's still enough to keep aficiandos of churches happy for a while. I like the slightly Edward Bawdenish hassocks around the altar; there's some interesting woodwork and some better than average early Victorian and Edwardian stained glass. Best of all is the font.

Hertfordshire can't boast a good collection of fonts; Anstey, with its mermen, is my favourite, but Ware has much the most elaborately carved. It dates from about 1380, when the Perpendicular style still had some reminiscences of Decorated. You can't say that the carving is top quality, but it's not without flair. Best of all, it's largely escaped the attentions of iconoclasts and other vandals and is remarkably complete.

There are eight main figures on the font, and between them are demiangels holding, alternately, Instruments of the Passion and musical instruments. The first eight photos below show the eight figures on the main faces of the font, starting with St George, who faces east, and then going round clockwise.

St George looks very unconcerned as he stabs the dragon, indeed, he looks practically uninvolved, as if he's out for a hike and has hardly noticed that he's accidentally speared something. The dragon itself is splendidly characterised. The hoodmould under which George stands has a distinctly ogee** shaped top to accommodate his helmet.
St Catherine of Alexandria carries the instruments of her martyrdom, the sword and wheel.

St James, the patron saint of pilgrims, has a staff and book. It looks as if he's carrying a roast chicken impaled on his staff. On his right is an angel brandishing three of the nails with which Christ was nailed to the cross.

This and the next panel together form an Annunciation scene, in which Gabriel tells Mary that she is to be the mother of Jesus. She is shown with a lily, a symbol of purity and chastity. Her face has been abraded, possibly deliberately by iconoclasts. If so, we can be grateful that they were rather lazy and did only a token amount of damage.

Gabriel's legs are clumsily carved. He holds an unrolled scroll and a wand. On his left an angel displays the scourge with which Christ was whipped.

St Margaret, patron saint of women in childbirth (obviously appropriate for a font), was swallowed whole by the devil, who'd assumed the shape of a dragon to perform this gastronomic crime. She managed to kill him with the cross she was carrying, however. In this depiction she's much more dynamic than St George, though her dragon isn't as fearsome. Her face has been badly damaged too; the church guidebook suggests that she and Mary were targeted because they faced the main entrances into the church. Maybe.

St Christopher carries the young Christ over beautifully stylised water. The faces of Christ and the two flanking angels are badly damaged.

This angel, holding the lance with which Christ's side was pierced, isn't at all as angels are normally depicted. She looks deeply haggard and hollow-cheeked.

The font must be nearly coeval with what's usually called the Peasants' Revolt of 1381 (though modern historians point out that most of the rebels weren't peasants at all but what we'd now call middle class). There's a connection between this event and Ware, as Joan of Kent, the mother of King Richard II, was Lady of the Manor (and local legend has it that she paid for the rebuilding of the church). Representations of her death-mask allegedly feature in the corbels at the east ends of the aisles, and the badges of her family (a white hart) and of her son the king (a white hart with a crowned collar and a chain) indisputably feature in other corbels. The story goes that during the revolt she was stopped by Wat Tyler and the rebels, but shown respect by them and allowed to proceed and even given an escort.

This is perhaps of dubious historicity. But it is certain that during the revolt the castle of John of Gaunt (against whom the revolt was partly aimed) in Hertford was attacked by rebels from Ware, who seriously damaged it and stole goods worth a thousand pounds (an astounding figure). After this, fifty of the Ware rebels teamed up with others from Essex and went to London, where they assaulted  and more or less demolished Gaunt's Savoy Palace (in the Strand, where the Savoy Hotel and Theatre stand now). It would be good to be able to find some hint of these events somewhere on the font, but I can't.

There's an article by the Rev. Harry P. Pollard about Hertfordshire fonts in the Transactions of the St Albans and Herts Architectural and Archaeological Society, 1908:
http://www.stalbanshistory.org/documents/1907_14_01_.pdf
It's delightfully redolent of leisured Edwardian vicars. But the Rev. Harry mentions Ware's font only in passing, even though he admits that it's second only to that of Anstey in the county. Incidentally, the article reveals that suspicious, over-protective church custodians and locked churches aren't the preserve of the 21st century. He mentions having to seek out 'the guardians of the keys', and twice he was accompanied by them to their churches, 'apparently thinking that the parish would shortly be mourning the loss of a font if I went unattended.' Isn't it comforting to know that some things never change?

* Clerestory windows are of course to be found in upper storeys; they're the 'high windows' Philip Larkin wrote about so memorably. But how should the word be pronounced? For decades I stressed the middle syllable (cleRESTory), and then for some reason I started stressing the first syllable, which seems to be the preferred modern pronunciation. (My 1964 Concise Oxford lists only the first.) This is an example of how stresses unaccountably creep from syllable to syllable; consider for example the case of 'formidable', which used to be pronounced with the stress on the first syllable, but is now almost universally stressed on the second. Why?

** An ogee is an S-shaped double curve, very typical of the Decorated style dominant in the first half of the 14th century, though Perpendicular architects and artists continued to use it for the best part of the next two centuries.

Posted by David Gouldstone at 20:39