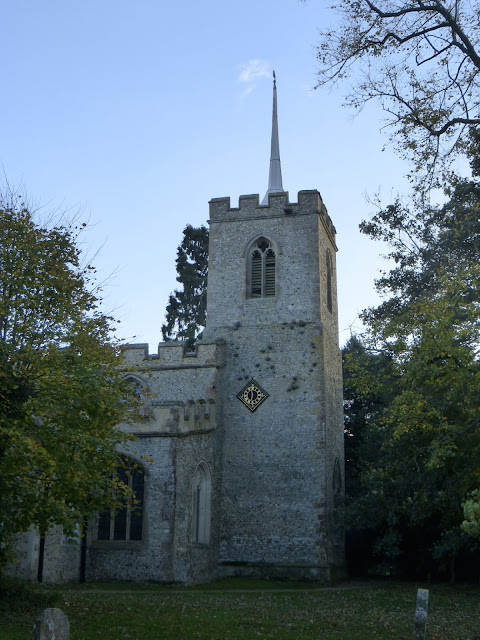 Ardeley is one of those churches that used to be open when I first started making a concerted effort to visit all the aesthetically or historically significant places of worship in Hertfordshire (a project still far from complete) in the late 80s, but is now usually locked. But the last time I visited, midweek a few months ago, there was at least an apologetic notice on the door regretting the closure and saying that the church would generally be open at weekends.

Last weekend I decided to investigate if this is indeed true. And I'm very happy to say that it is (or it least it was on one bright early autumn Sunday). I arrived at about midday, and clearly a service had only recently finished: incense was still swirling in the air, brightly lit by the heavenly spotlights of sun spearing down from the clerestory windows. (I'm not religious, but if I were I'd be a High Anglican.) 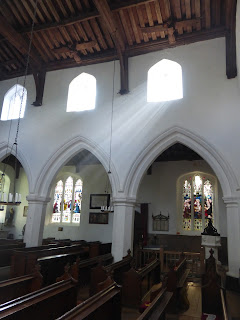 The main reason I wanted to get into the church was to see this monument again. It commemorates Mary Markham, who died in 1673. 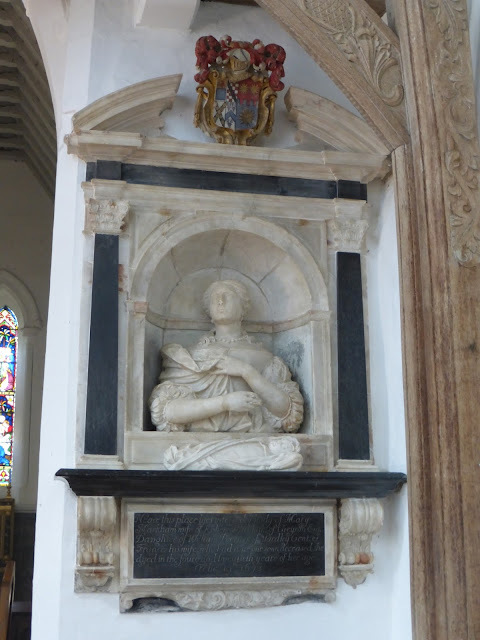 This is a very fine and more than usually moving monument. The architectural elements are pretty standard for their date, but their relative simplicity provides an excellent foil for the sculpture. I especially like the elaborate coat of arms poised between the arms of the open segmental pediment. 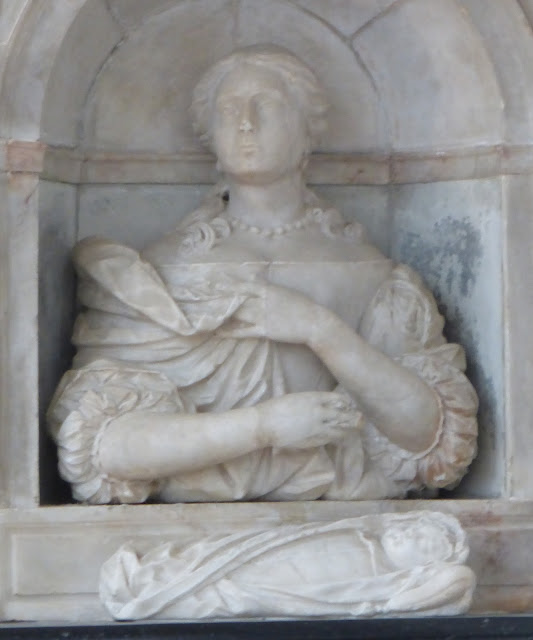 The demi-figure of Mary is brilliantly understated. She is expensively dressed but with bare forearms, which perhaps makes her look vulnerable; her puffy sleeves are finely carved. She looks off into the distance; it's hard to read her expression, but it seems to combine noble stoicism and profound suffering. No sentimentality here; the very lack of outward emotion is what makes it so emotional. In her right hand she holds something, I think a book, presumably a prayer book or bible (the book and her hand have been damaged), and her left hand clutches her dress to her chest protectively. Somehow the delicate gesture in which her little finger is separate from the others is very affecting.

What really makes this monument stand out is the swaddled baby on the ledge in front of her. He too is very tenderly carved; his face is almost unbearably touching. 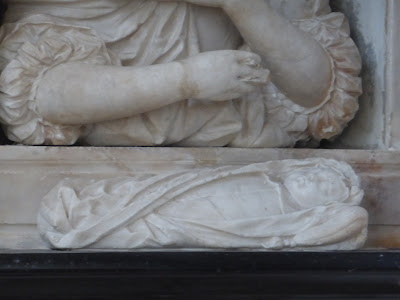 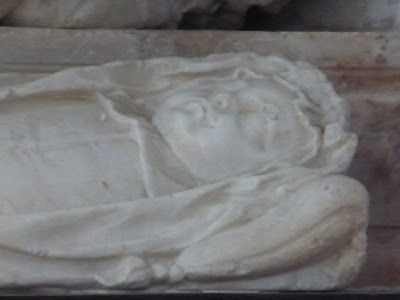 Even without the inscription we can guess the story, no doubt common enough until relatively recently, of a mother dying in childbirth, and the baby dying with her. The inscription confirms our worst suspicions. 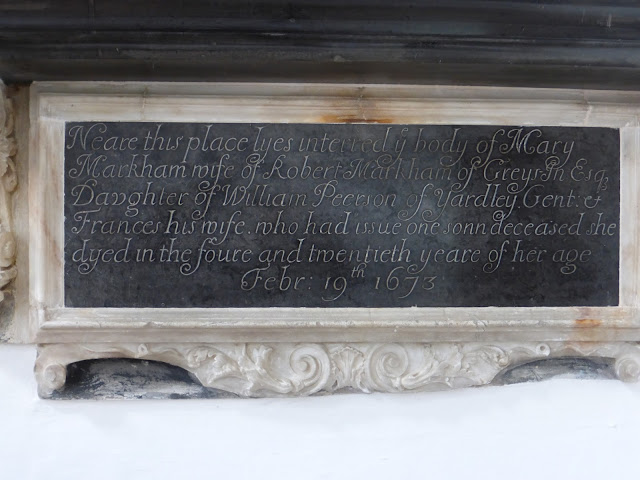 We learn that she 'had issue one sonn deceased', and that 'she dyed in the foure and twentieth yeare of her age'. In the face of such tragedy it seems almost impious to take pleasure in the exquisite lettering (see the elegant curls on many of the capitals, and the way the two 'f's in the last two lines (excluding the date) link). The carver felt free to vary the way he cut the letters; compare the 'u' in 'Daughter' with that in 'issue', for example. We can also note in passing that punctuation doesn't seem to have been thought necessary.

Pevsner (or more likely his 2nd edition reviser) attributes the monument to Edward Stanton, and everyone since concurs. The briefest of glances at Rupert Gunnis's Dictionary of British Sculptors 1660-1851, however, shows that this can't possibly be true, as he wasn't born until 1681. The mistake has come about, I imagine, because Edward Stanton is the sculptor of another monument in the church, that to Henry Chauncy, who wrote the first history of Hertfordshire in 1700 (which also, incidentally, has lovely lettering, and endearing rustic putti wearing the draperies like immensely tall hats). 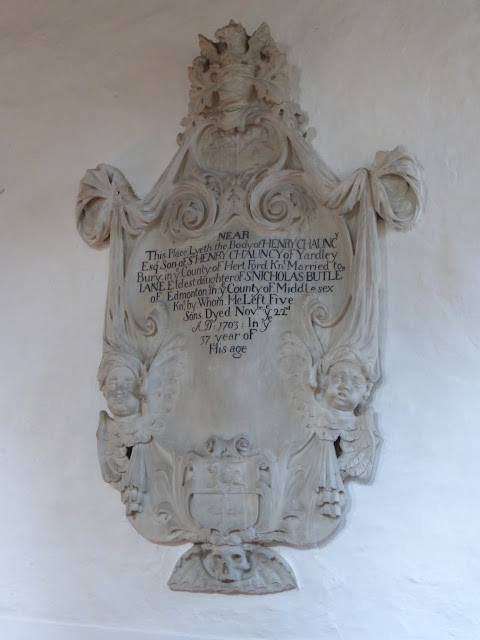 The likeliest author of the monument (though this is a stylistic attribution, and so is open to debate) is Edward's father, William Stanton (1639-1705), one of the best 17th century sculptors. (He is the probable author of the Saunders monument in Flamstead, Herts, about which I'll probably write one day.)

There's plenty more to linger over in the church. The most prominent feature is the richly carved Arts and Crafty rood loft of 1928, by F. C. Eden. 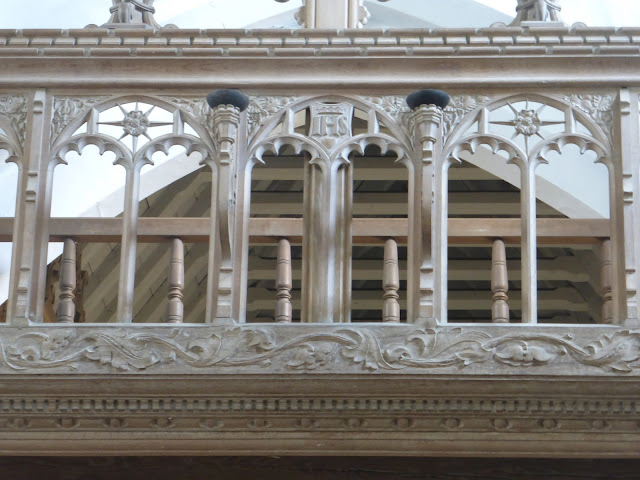 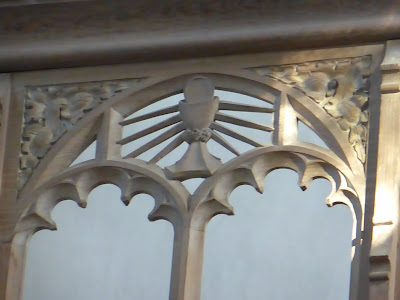 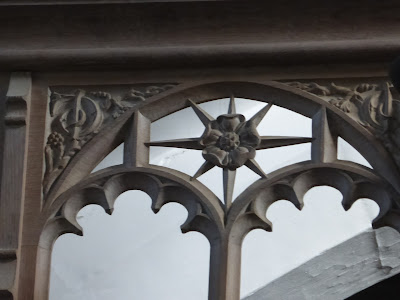 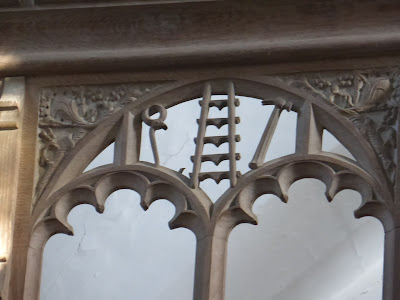 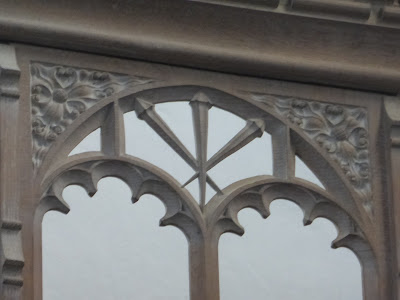 The otherwise plain octagonal font has four big heads poking rather oddly out of its sides. Pevsner speculates that it's 14th century, but no one really knows. 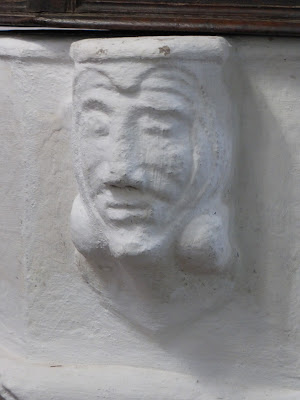 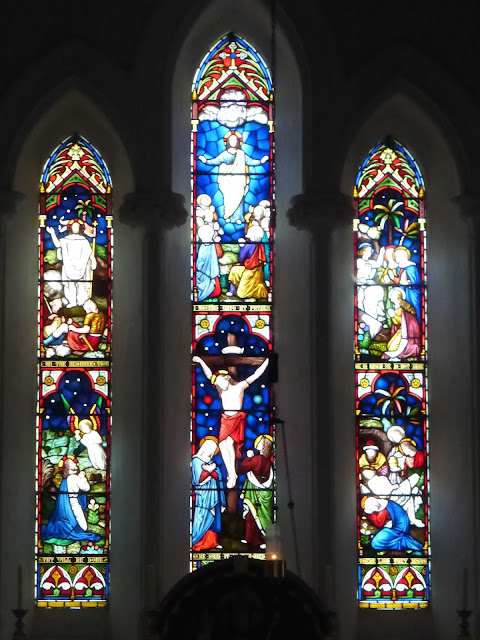 The east window is very striking. It's by the Horwood brothers of Mells, Somerset, (I have to admit I'd never heard of them; Martin Harrison's Victorian Stained Glass doesn't mention them), and commemorates a death in 1868. The faces are free of the sentimentality that so often damages Victorian windows. The leading of the sky in this detail (there are six scenes) is particularly individual. 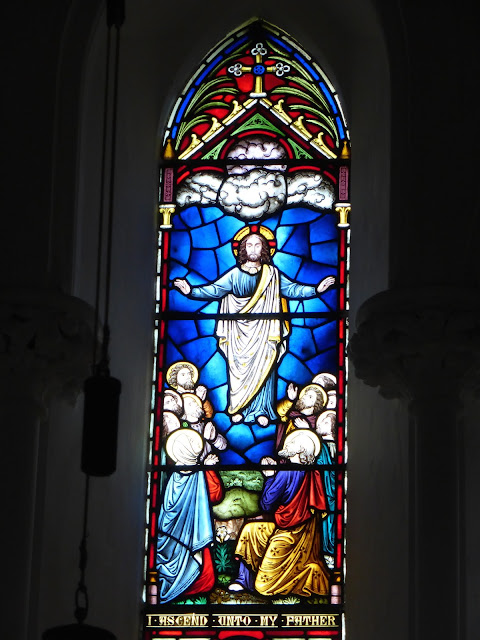 Immediately outside the church, across the road, is a crescent of thatched cottages and village hall around a brick well and green that at first glance looks ancient, perhaps 16th century, but in fact is by Eden (again) and dates from 1917. Even the statuesque dead tree in the background, looking particularly handsome against a rare blue sky, adds to its rural picturesqueness. 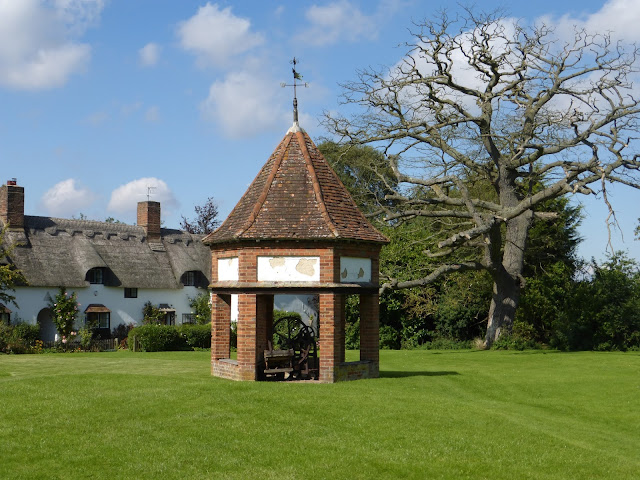 The village hall has a portico with wooden Tuscan columns, (and, on the day I was there, a visiting traffic cone). 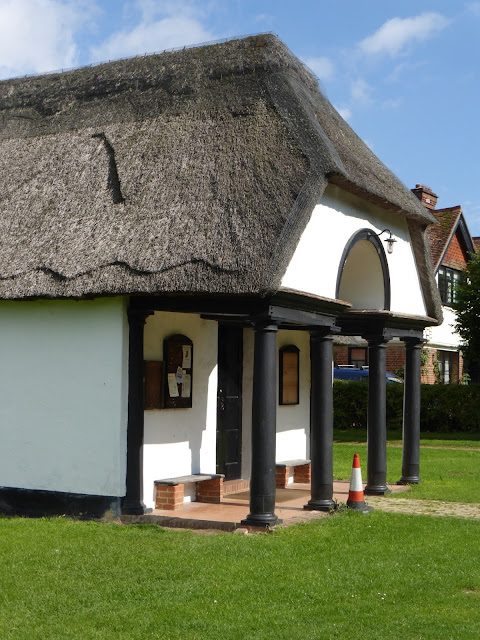 Ardeley also has a pub and an open farm with a tea shop. Why would anyone possibly want to go anywhere but here on a beautiful sunny Sunday? 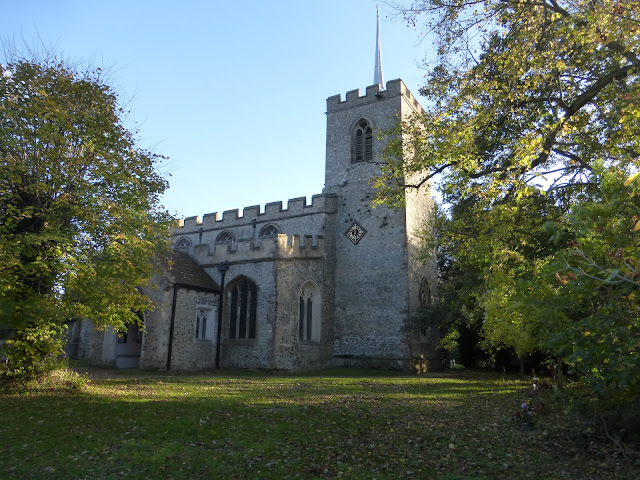 Posted by David Gouldstone at 22:46

Email ThisBlogThis!Share to TwitterShare to FacebookShare to Pinterest
Labels: Ardeley