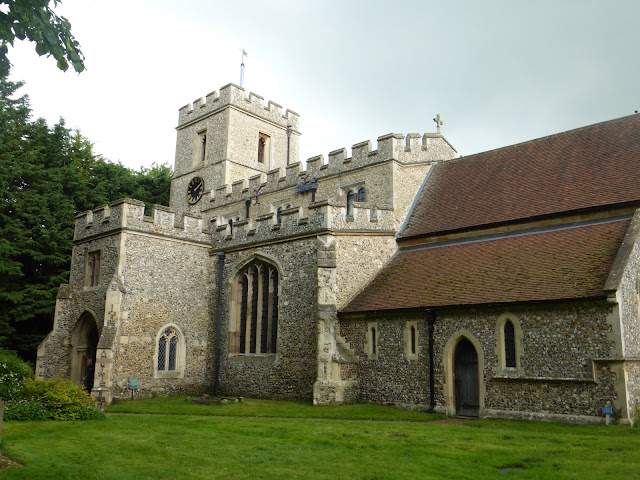 On first approaching Walkern church your first impression is that the nave, aisles and porch are typical Herts 15th century Perp'n'flint structures. This is true enough as far as it goes, but as soon as you step through the door you realise that the origins of the church are nearly half a millennium earlier. 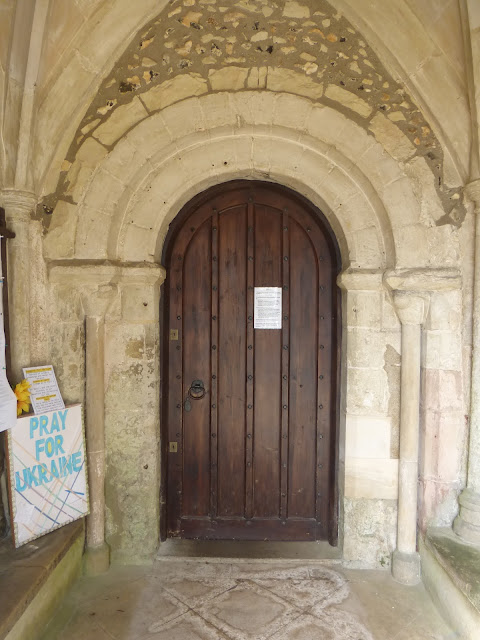 The south doorway, sheltered by the porch, is enough to alert us to the fact that the church dates back at least as far as the 12th century, as it's clearly Norman. 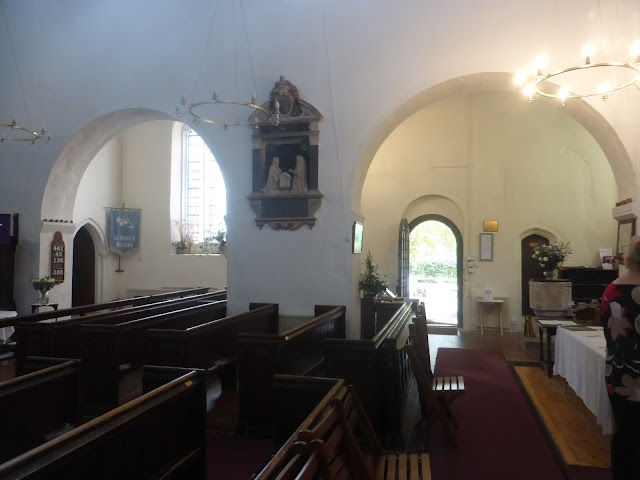 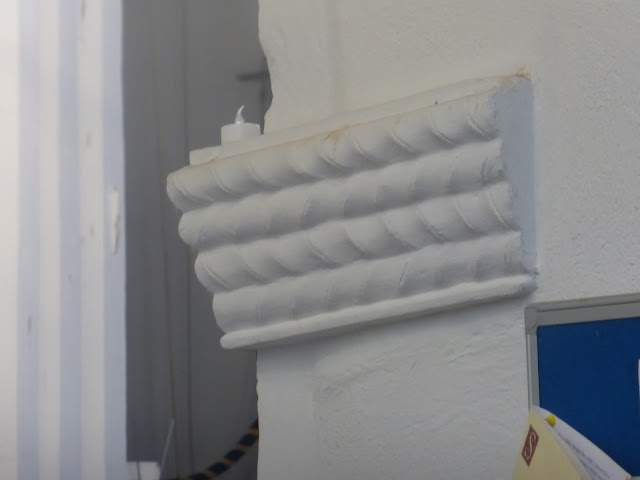 Through the doorway we are faced with two very plain arches (seen from the north rather than the south in the photo above). They are late 11th or early 12th century, but they have been cut through an earlier wall. The evidence for this is that the wall is only 2' 3" (69cm) thick, whereas Norman walls are generally much thicker, and that the imposts, one of which has four layers of cable-moulding, look Saxon rather than Norman. They were probably originally the imposts of the south door, because what we're looking at is the original south wall of the nave. (It's impossible to give an exact date to them, or even to say definitively that they're pre-Conquest, because clearly masons didn't start working in a new style on 15 October 1066, the day after the Battle of Hastings; it would have taken decades for the Norman influence to be absorbed and adopted.)

The clincher is this figure of Christ from a Crucifixion, which was once on the outside wall of the church (perhaps immediately over the original door) but is now in the south aisle. It seems to date from the mid 11th century, and is the only piece of Saxon (or earlier) figurative sculpture in a Hertfordshire church. The stylised, solemn head is in high relief (he is said to have a moustache, though this is difficult to make out); where the torso and outstretched arms once were has been cut away (perhaps to accommodate a beam). From the waist down is depicted by incised lines. He is wearing a tunic which seems to be tied by a belt, the two ends of which hang down in front. (In later depictions of the Crucifixion Christ is almost always naked.)  The figure's primitive (I use the word non-pejoratively) power pervades the whole church. 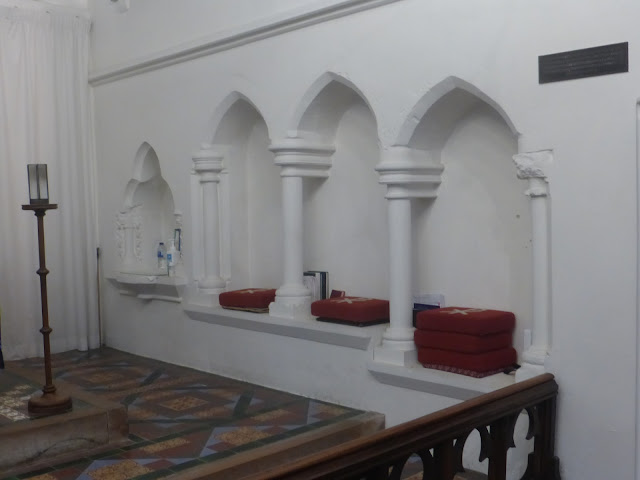 The chancel is essentially 13th century, though this is invisible externally as it's been added to and restores so thoroughly. But inside the piscina and triple sedilia are original; they were uncovered by Henry Woodyer in 1877-8 (he also rebuilt the east wall and constructed a vestry on the south). 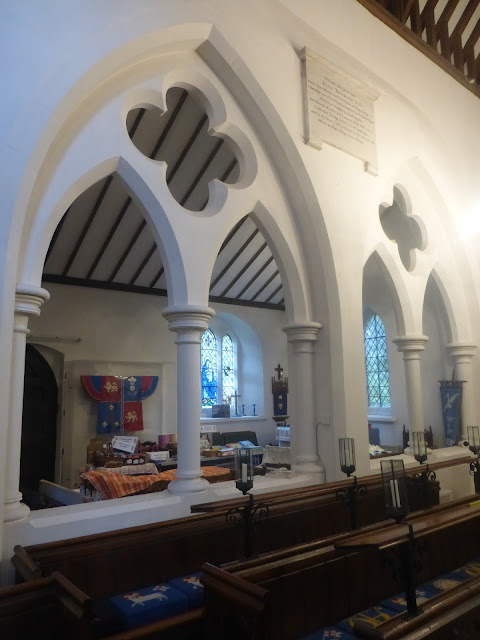 The north chapel was built by H R Gough during an 1882 restoration; the two large plate traceried openings, out of scale for a smallish parish church, are in the style of the 13th century. 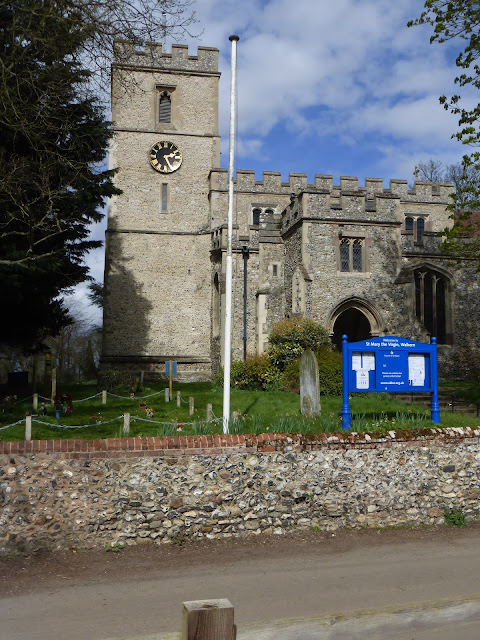 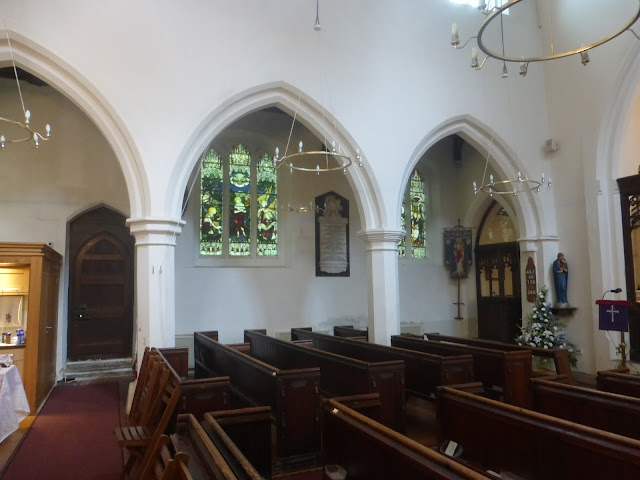 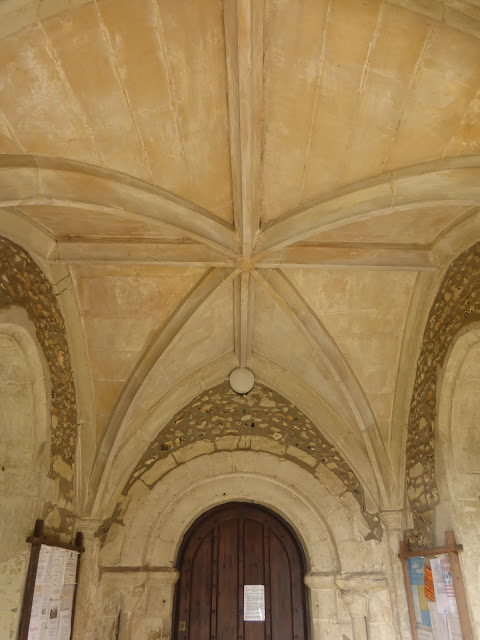 The north aisle, with its three-bay arcade, is probably 14th century (though the windows were replaced in the 15th or early 16th centuries), as is the unbuttressed tower. The 15th century two-storeyed vaulted south porch was the last addition before the Victorians. 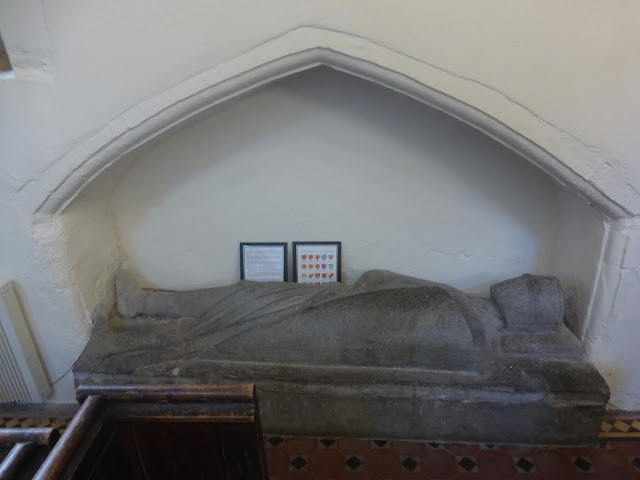 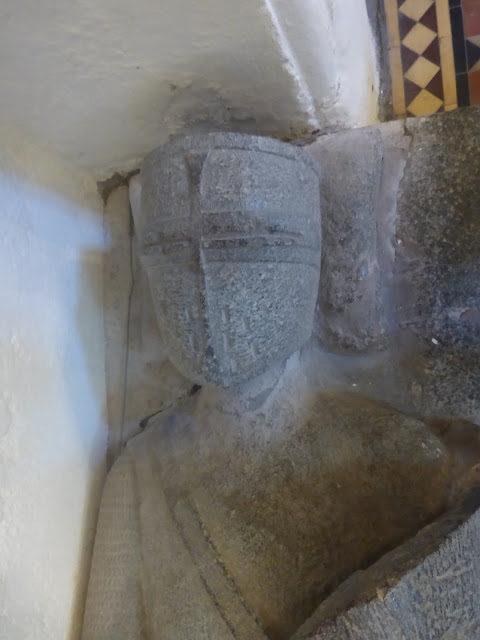 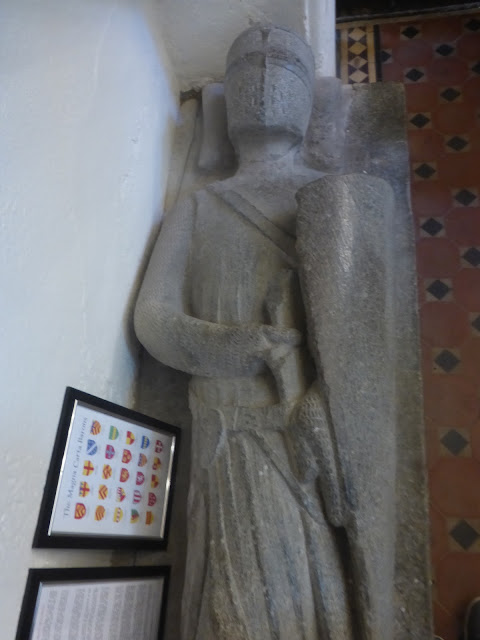 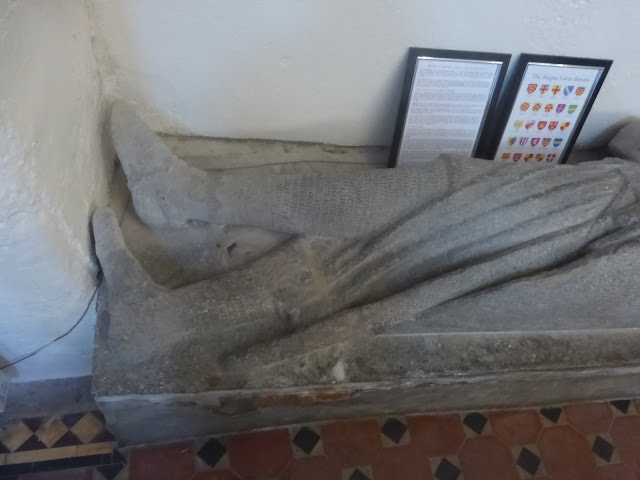 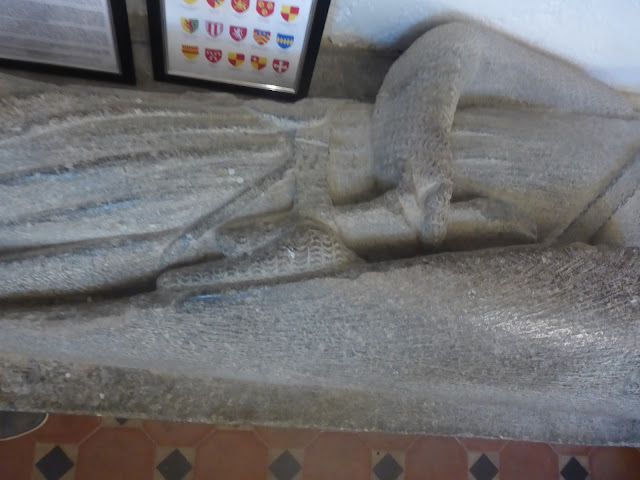 Apart from the Saxon rood the church's other outstanding feature is an early 13th century monument to a knight, traditionally said to be William de Lanvellei, who died in 1217 (though his father, also William, who died in 1204, is another possibility). William was the Lord of Walkern and the Governor of Colchester Castle during the troubled reign of King John (1199-1216). His relationship with the king is hard to determine; on one hand he accompanied him on the abortive Siege of Roche-au-Moine in 1213-14, but was one of 25 barons appointed to ensure that he obeyed the Magna Carta in 1215, which implies that he was trusted by the rebels to call the king to account when necessary. Perhaps he was one of the many who was initially loyal to his sovereign but lost patience with him. John's reign ended in a calamitous civil war and an invasion by the French king, Louis VIII, who was proclaimed King of England in 1216 (though his disputed reign lasted less than four months).
The Purbeck marble chain-mailed effigy certainly reflects the brutal, chaotic times. It's one of only three in the country to wear a helm that completely obscures the face: the effect is forbidding, alien. A medieval Cyberman. This is compounded by his hand grasping the hilt of his long sword (which extends down to his feet), apparently in the act of drawing it with hostile intent. It is the stuff of nightmares.* 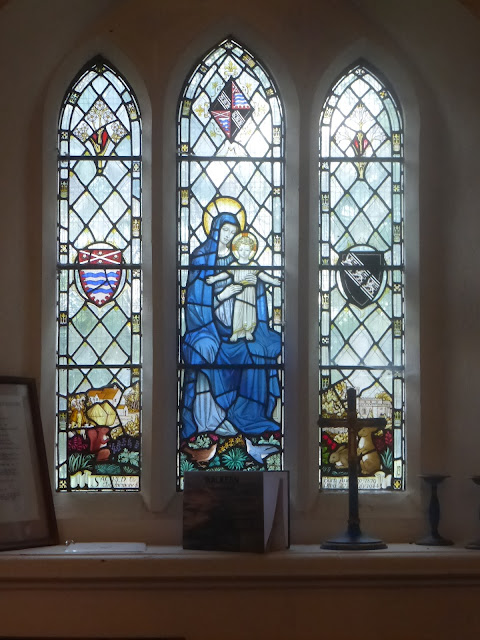 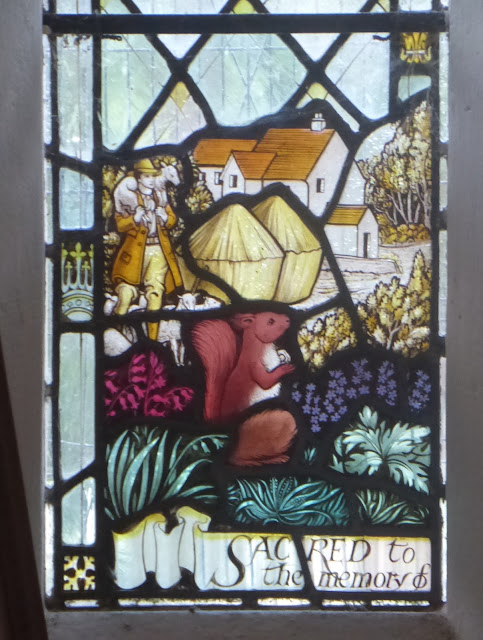 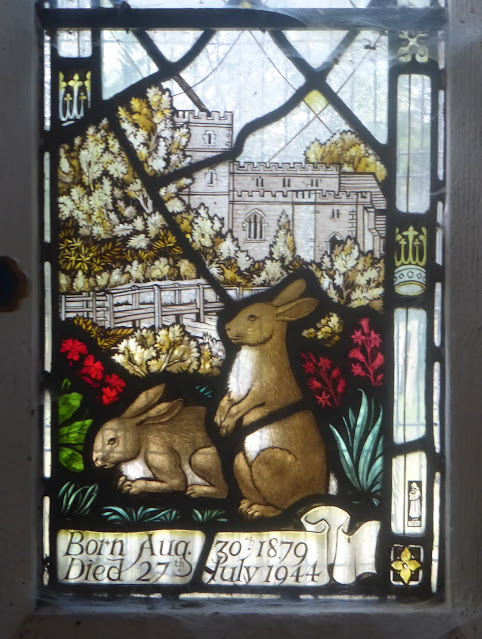 After this something sweet and even sentimental wouldn't come amiss, and that's exactly what we find in the north chapel. It's a window showing the Virgin and Child; it's by Powell and Sons (signed bottom right with a small figure of a monk), from 1950. The central figures are undistinguished, but, as so often, the incidental details are worth looking at. On the bottom left we see a shepherd carrying a sheep on his shoulders past a gabled house, and in the foreground a red squirrel among various flowers. (I wonder when the last red squirrel left Hertfordshire?) In the middle are two birds (maybe a wren, and a bluebird, which of course are not found in England). On the right are two rabbits in front of Walkern church itself. I'm not ashamed to admit that I think the furry creatures are very cute.
Walkern church is usually locked.
* It is notable that the knight has crossed legs, yet there is no suggestion that he was a Crusader, which should once and for all knock on the head the still occasionally heard false idea that crossed legs are symbolic. 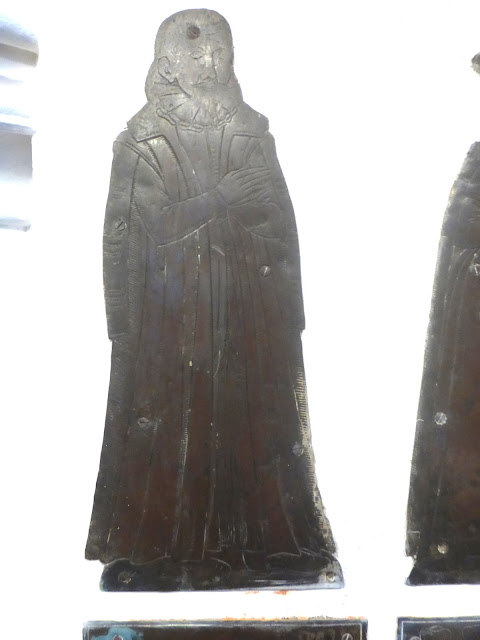 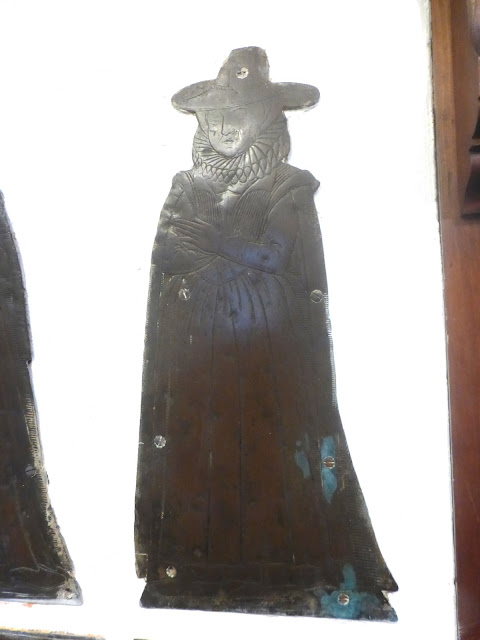 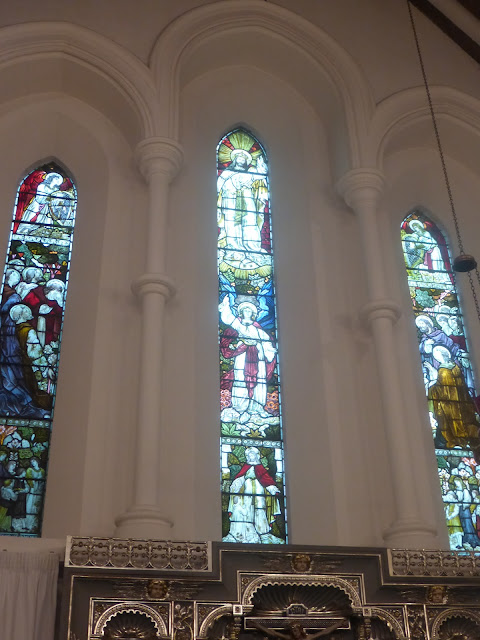 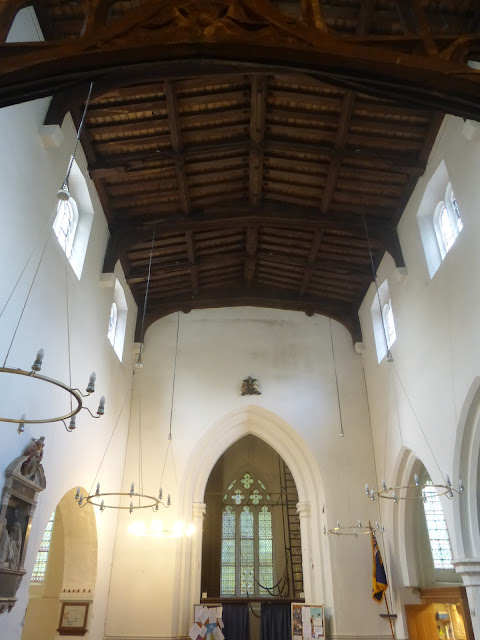 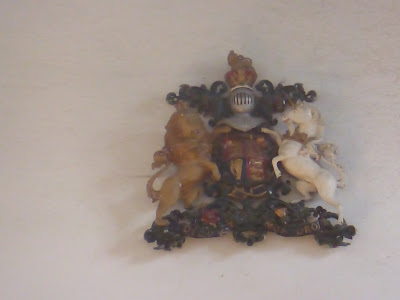 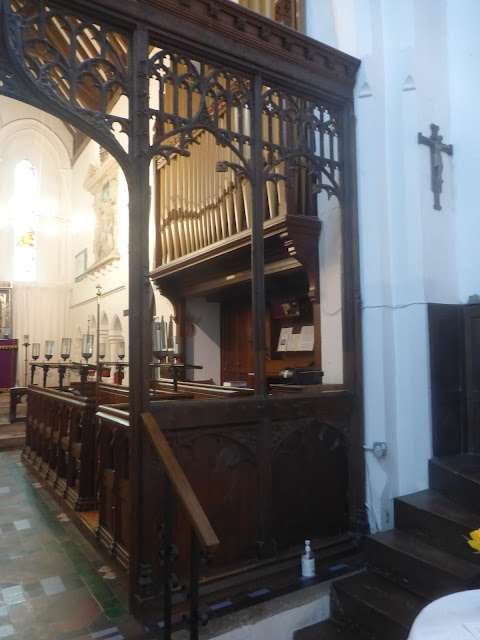 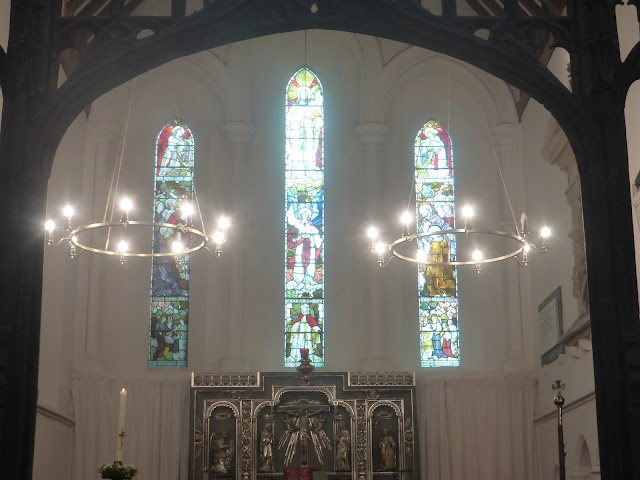 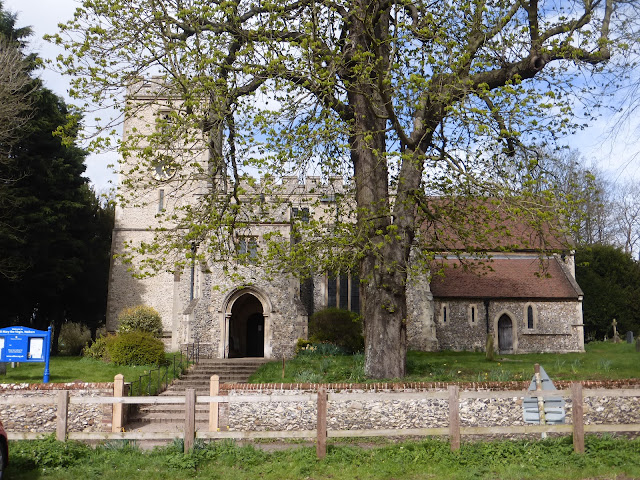 Posted by David Gouldstone at 19:01