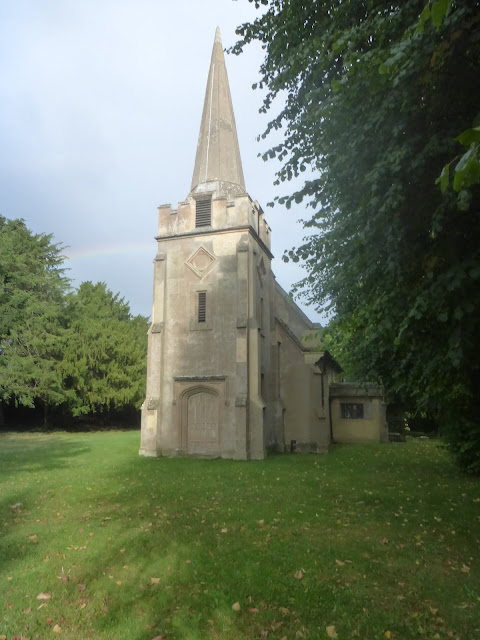 Bramfield's church is a small, unassuming building in a small, appealing village in the countryside between Welwyn and Ware. It has early origins, the chancel dating back to the 11th century, but, as the Royal Commission on Historical Monuments mournfully says, 'Restorations in 1840 destroyed nearly all traces of antiquity'. I'm sure that its parishioners and neighbours love it (and quite right that they should), but in truth it's not worth going out of your way to visit unless you're a nerdy completist (I plead guilty).

The nave was first built in the 14th century (which is also when the piscina was installed in the chancel), but again very little recognisably survives from that date. However, 1840 is a fairly early date for a church to have a through restoration, so there is interest in seeing what that period made of the job. (The evidence is obscured by a further restoration, in 1870, by C B Trollope, about whom I can find no information.) 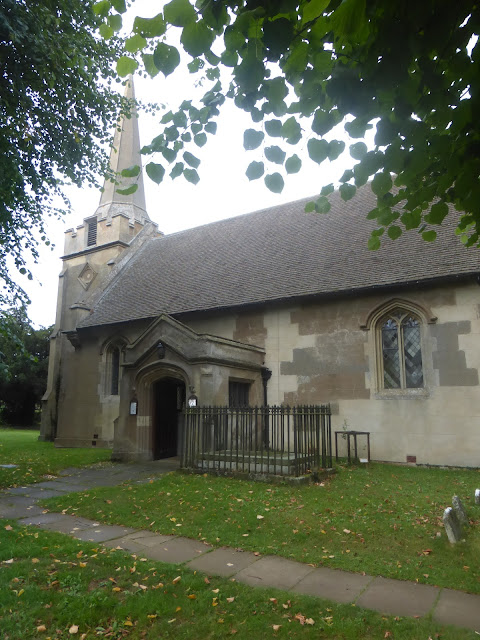 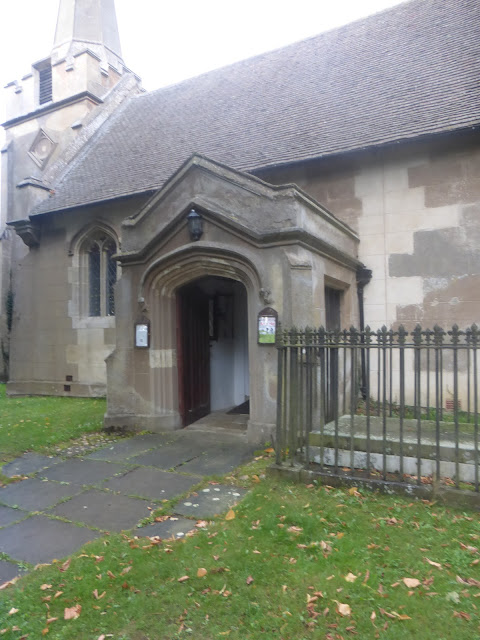 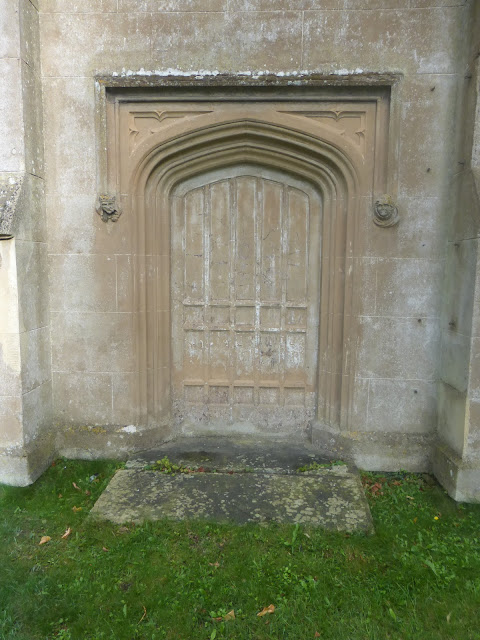 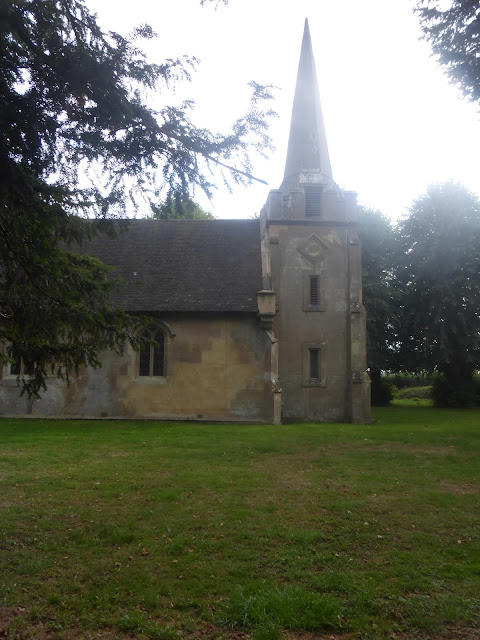 The teeny tower and spire and the porch are the main contributions from the earlier restoration. They adopt Tudor Gothic, with very flattened arches, rather than the early English or Decorated styles which would become so popular in the coming decades. There's also a hint of Gothick left hanging over from the previous century, which we can see in the lozenges near the top of three faces of the tower, and even more so in the almost absurd proportions - the tower is so small that it can't accommodate a stair, and access to the upper parts has to be by ladder. The spire is even shorter than the tower, which is always a bad look, and is splay-footed but octagonal all the way to its base (rather than square). Altogether the steeple looks as if they got the scale wrong on the plans and it is only a fraction of the intended size. (Maybe they confused inch symbols - " - with those for feet - ' - like in the Stonehenge scene in This is Spinal Tap.*)
One more curious feature is the west door. Or is it a door at all? Inside the church there's no hint of there being a door in the west wall. It looks as if the door at the foot of the tower is carved in stone, or at least moulded in plaster, and is merely for show. Can this really be so? 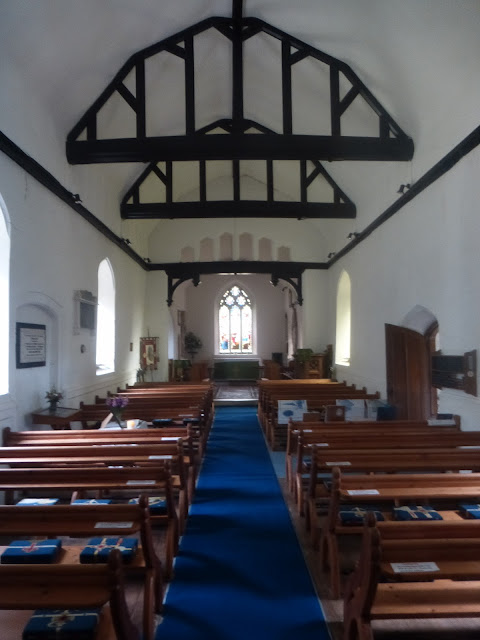 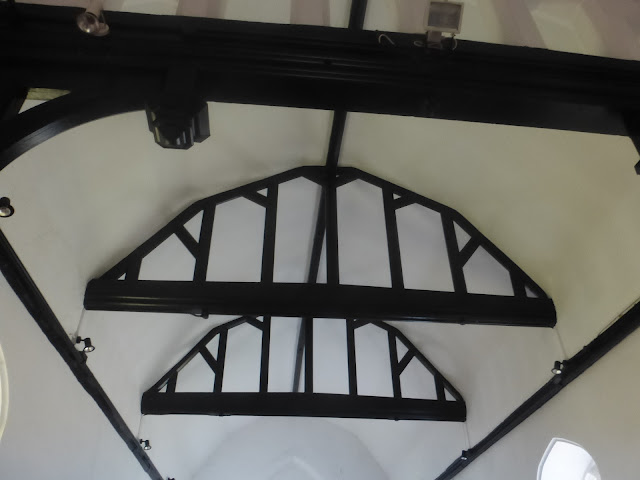 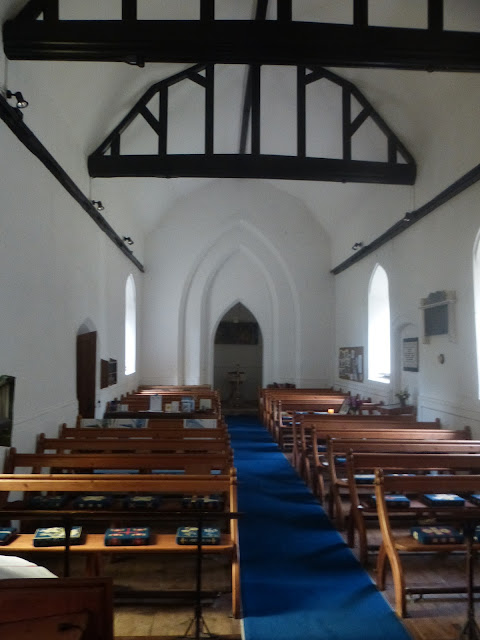 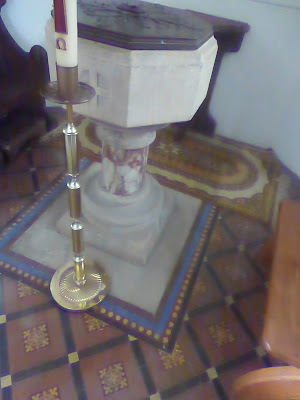 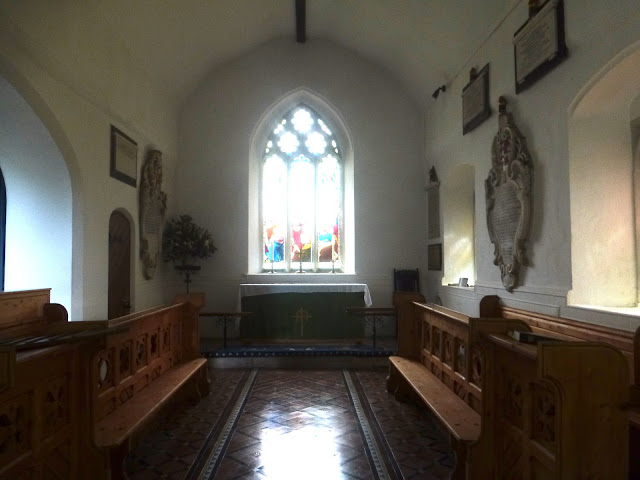 Inside, the most striking architectural features are the tie beams and struts in the roof. 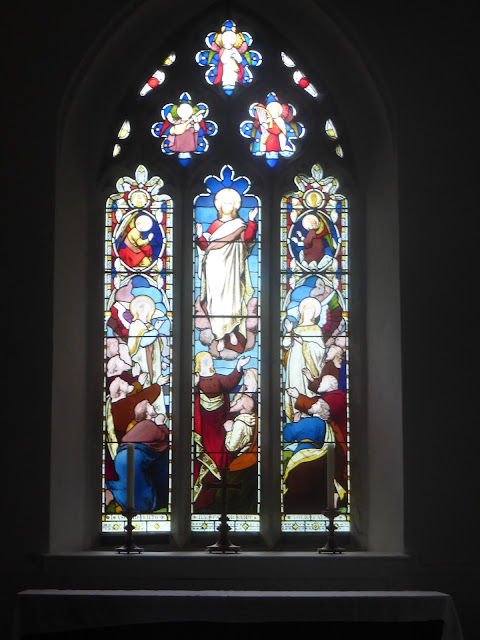 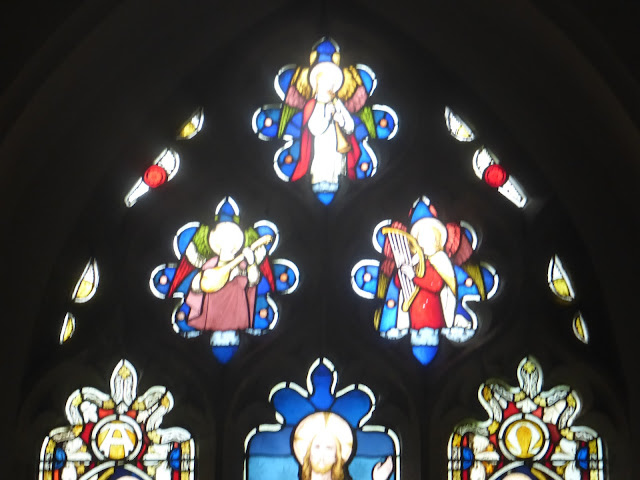 The east window, depicting the Ascension, is from 1869 and is attributed to Ward and Hughes.
There are a few monuments from the original church. 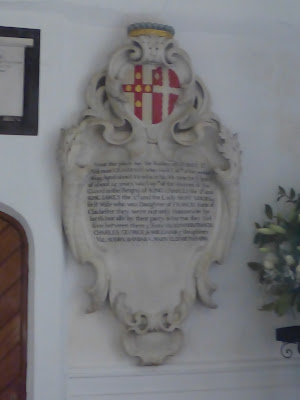 A baroque or even proto-rococo cartouche to George, Viscount Grandison, d.1699. 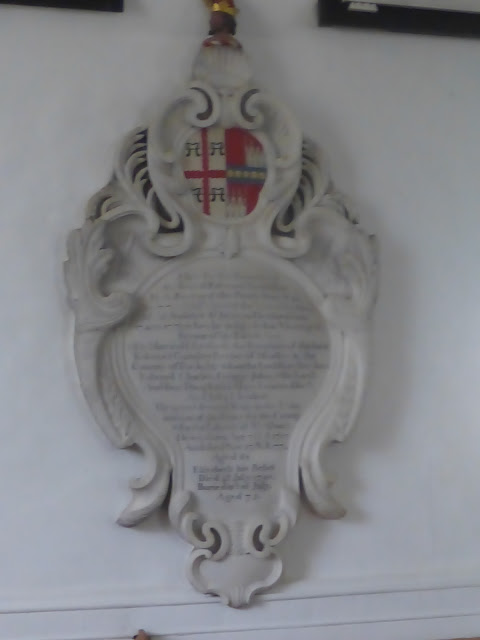 An almost identical cartouche to the Rev. Edward Bourchier, who died three quarters of a century after Grandison, in 1775, yet Bourchier's monument is an almost exact copy of the latter's. The inscription doesn't claim any kinship with Grandison, and the style must have been rather passé by then. Perhaps Bourchier or his surviving relatives had admired the earlier monument and decided to imitate it.
Bramfield is usually locked.

Virtually every source records that Bramfield was the first benefice of Thomas Becket (martyred in Canterbury Cathedral in 1170 and canonised in 1173). Some hedge their bets by saying 'according to the chronicler Matthew Paris of St Albans Abbey' (or words to that effect), while others (including The Buildings of England) simply state it as a fact.

It's true that Paris wrote about Becket, and presumably made the claim about Bramfield (I've been unable to trace the exact reference), but he was born about 30 years after Becket's death, and his statement contradicts established facts.

Becket, born about 1120 in London to reasonably well-to-do parents, was educated by the Church (which was really the only form of education available at the time). In the 1140s he joined the household of Theobald, Archbishop of Canterbury, as a clerk, probably performing a wide range of jobs. He obviously did well as in 1154 he was promoted to become the Archdeacon of Canterbury, at a salary of £100 per annum (the equivalent of well over £150,000 today). However, in order to take this post it was not necessary for him to be ordained. He remained a member of the 'secular clergy', and while he worked for the Church and the Archbishop he wasn't a priest, and could live his everyday life as before. He was supposed to have his head tonsured and wear clerical dress, but could own property and bear arms, and took no vow of obedience. It seems that he showed little if any desire to be a clergyman. In 1155 he was appointed Chancellor of England, and lived a secular life to the full.

In 1161 he was made Archbishop of Canterbury by Henry II, and of course couldn't take up this post without being a priest. So an ordination ceremony had to be hastily arranged, which took place the day before his consecration. This caused considerable scandal; Gilbert Foliot, the future Bishop of London, said grumpily that Henry had 'from a secular man and a knight ... fashioned an archbishop.'

The upshot of all this is that Becket can't possibly have been the vicar of Bramfield, or anywhere else, because he wasn't a priest until he was made an Archbishop. Which raises the question of why Paris made the claim. Did he know that Becket wasn't a priest until 1161? I suspect he did, and speculate that the Bramfield story was an invention to make his promotion seem more respectable in order to avoid besmirching the reputation of England's premier saint and martyr.

Source: Thomas Becket: Murder and the Making of a Saint, Lloyd de Beer and Naomi Speakman, 2021. 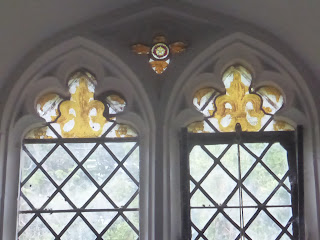 Posted by David Gouldstone at 10:02