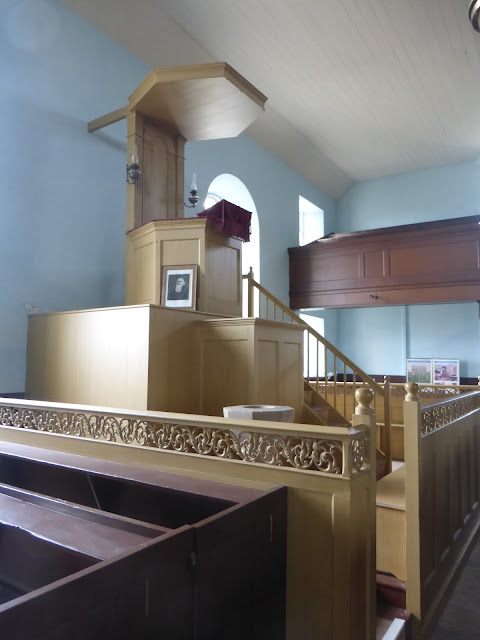 The main reason why most people go to Orkney is of course to see the Neolithic and Iron Age remains, and they are indeed very much worth the journey. But there are also more recent buildings that deserve attention, one of them being Sandwick kirk on the Bay of Skaill on the west coast of the Mainland, facing the Atlantic. 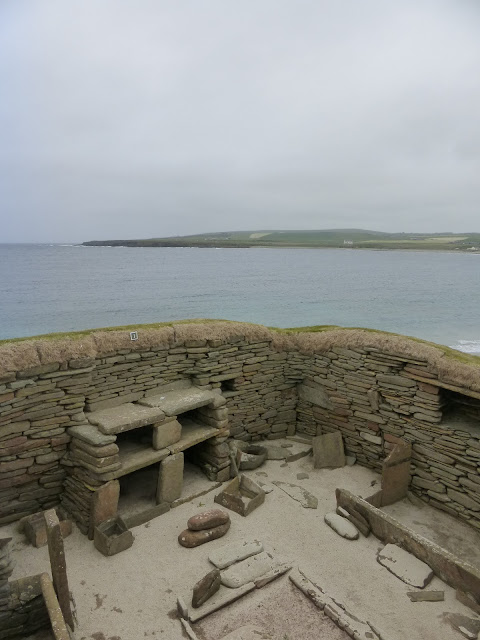 The church's position on the bay is simply superb; it is visible from the five thousand year old settlement of Skara Brae (I was there on an overcast morning - though the sun came out later that day - so it's hard to make out the church in the photo above, but it's just above the shoreline about a quarter of the way from the right edge). 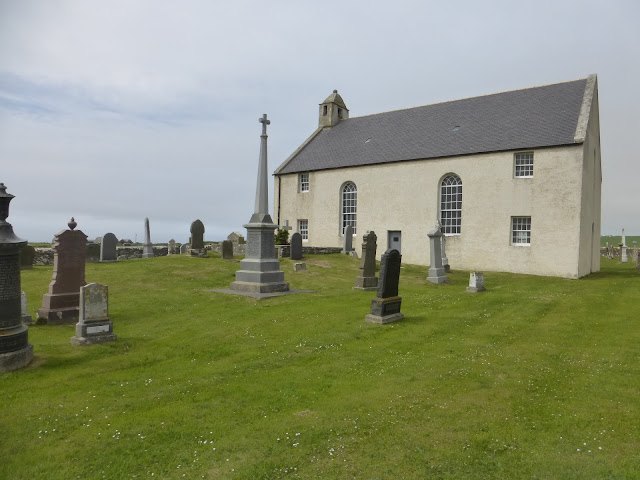 There had been more than one church on the same site over the centuries, but by 1834 the then current one (built in 1670) was semi-ruinous, being described as 'cold, uncomfortable and inconvenient.' The Minister, the Rev Charles Clouston, indignantly complained that it was 'in a very bad state of repair ... the roof being so old that no patch seems to remain longer than the commencement of the first gale of wind ... it is consequently so intolerably cold that I have been twice severely indisposed from exposure in it.' It's not hard to imagine that the gales whipping in from the Atlantic would have been extremely trying. He consequently, and not unreasonably, proposed building afresh. He also wanted to abandon the site and have his new church nearer to where the majority of the population of the parish lived, rather than on the very edge, some miles from the village. However, when eventually, in 1836, building started it was on the foundations of the older church. The mason, James Sinclair, and glazier, William Hervey, seem to have been responsible for the design. The new church cost £633/9s/8 1/2d, the equivalent of about £73,940 today, which sounds remarkably little. The same source confusingly also states that the cost was £373/11s/7d (£43,686).

A church or chapel of this date in England would probably have been built in simplified Gothic, but Sinclair and Hervey chose the Georgian style, not unlike that of much contemporary domestic architecture, with sash windows arranged symmetrically, the larger ones on the south being round-headed. The three doorways are all unprepossessing, though those on the east and west have fanlights. Externally the only thing that singles out the building as a place of worship is the small bellcote, topped by a ball finial - almost the only ornamental feature - perched at the west end.

The walls are harled (a new word to me; it's Scottish and means 'roughcast with lime mingled with small gravel') and lime-washed. The exterior is rather handsome, especially the south front, though the door is disappointingly out of scale, and the slates which replaced the original Caithness flagstone roof in 1910 are drab. 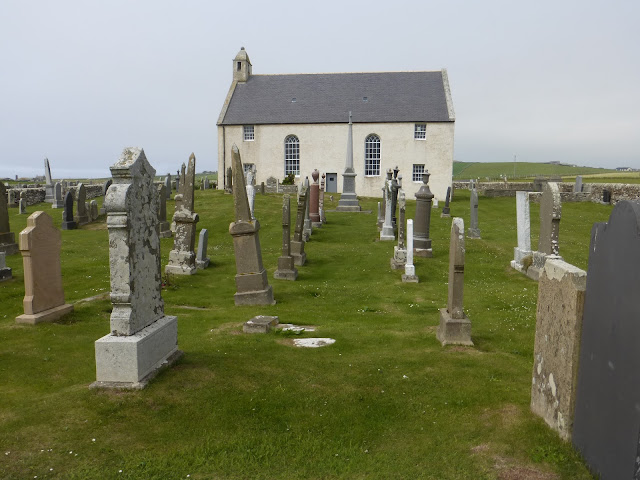 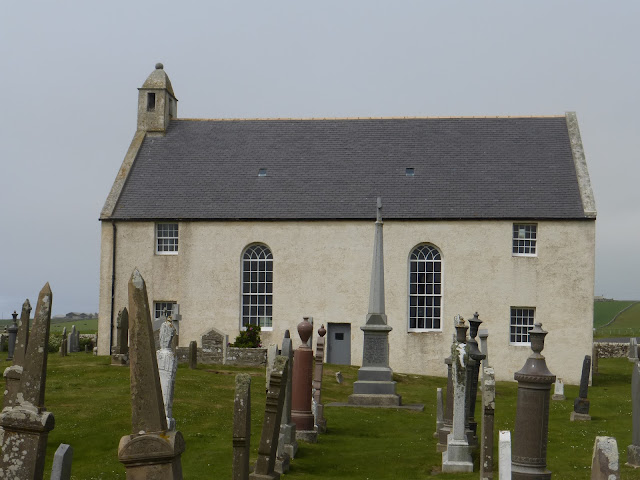 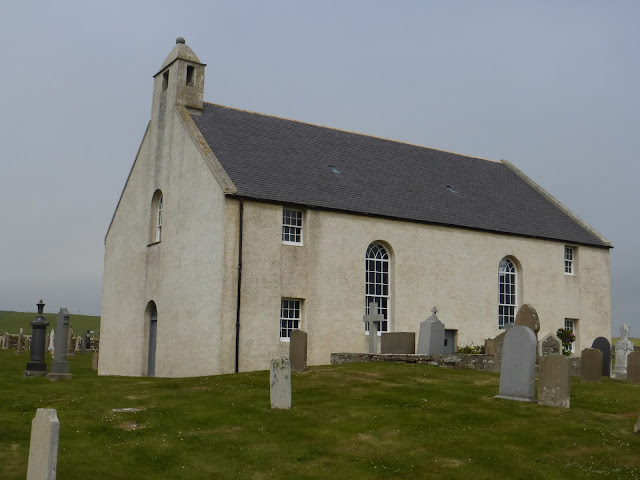 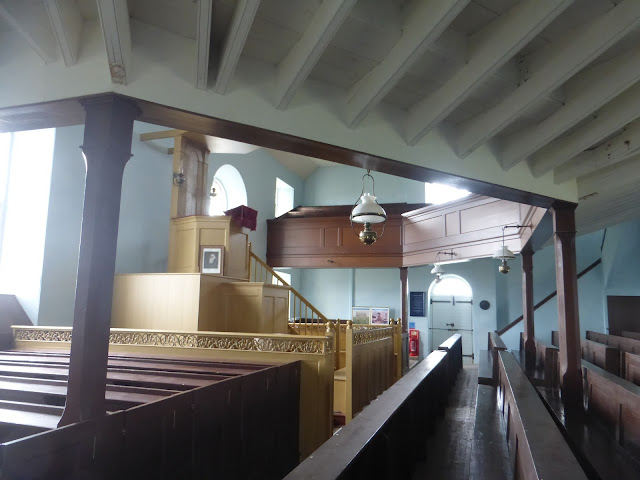 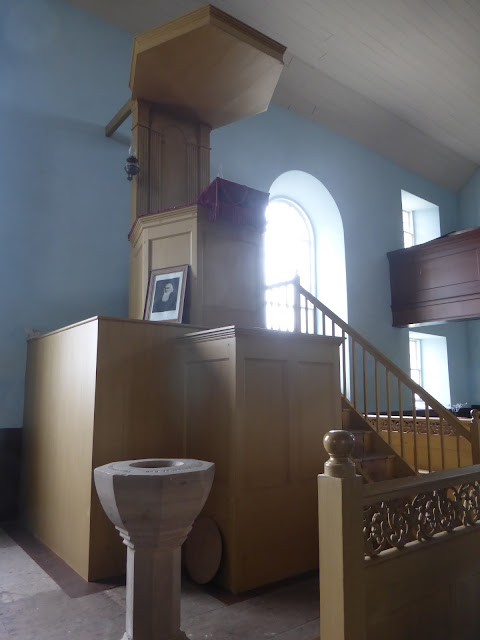 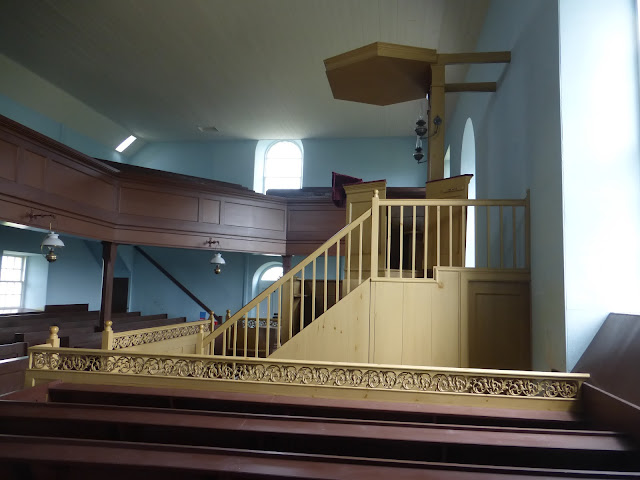 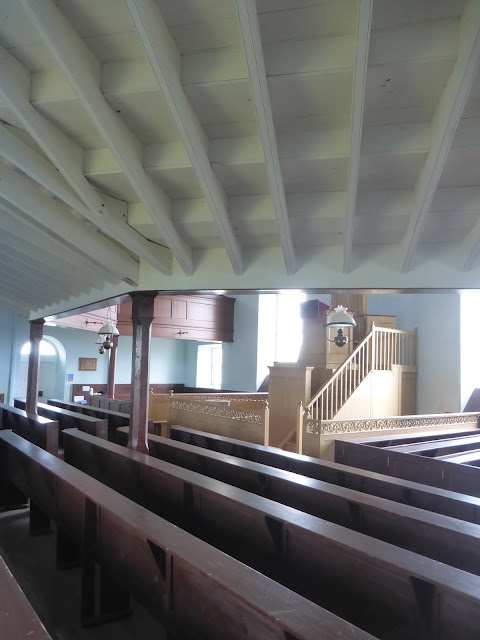 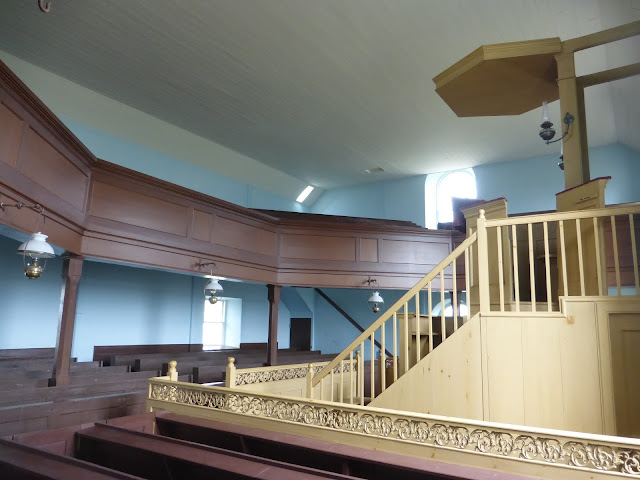 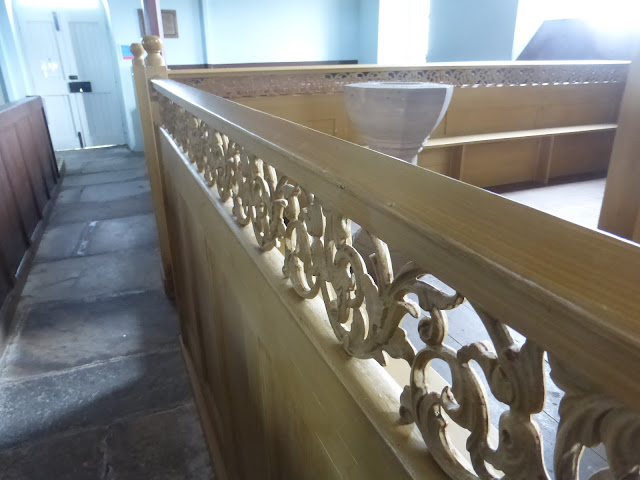 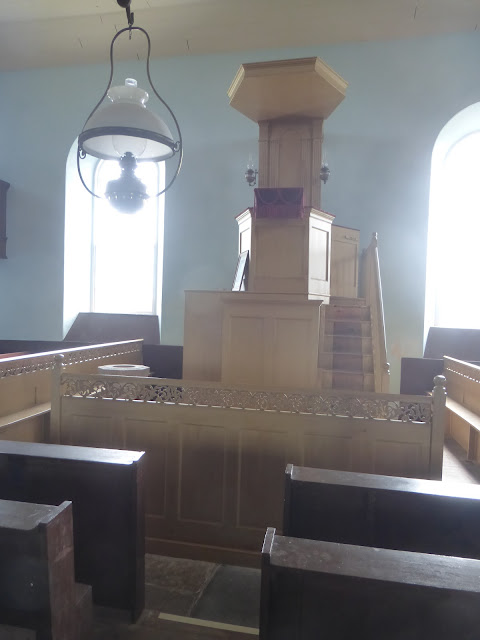 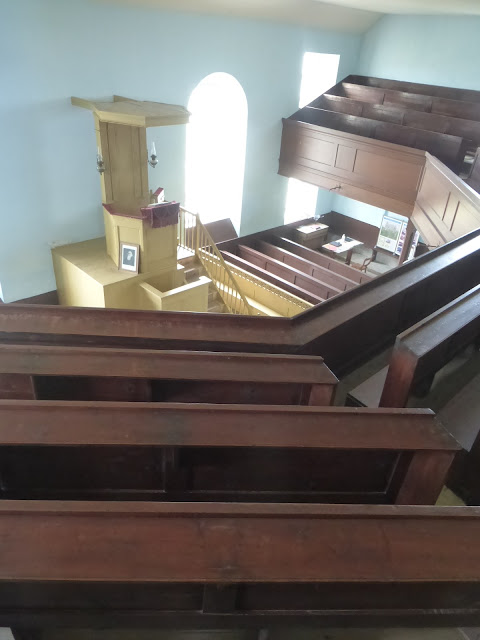 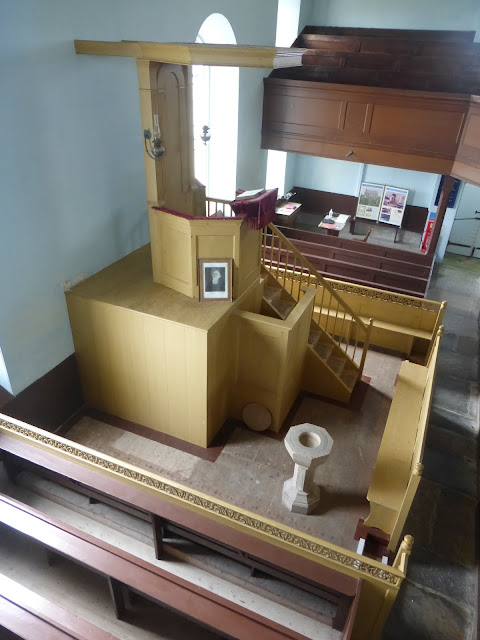 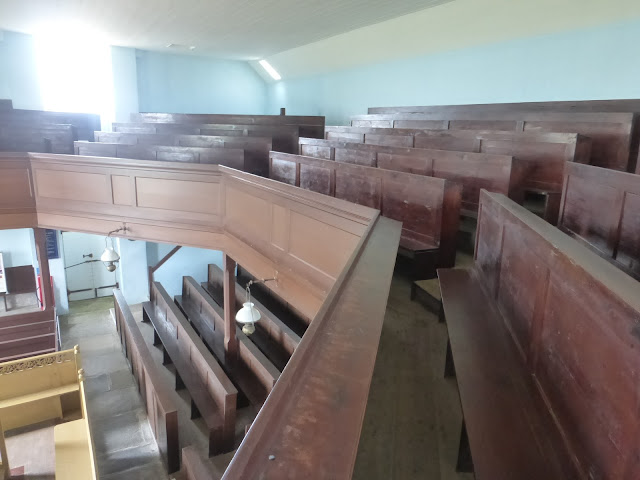 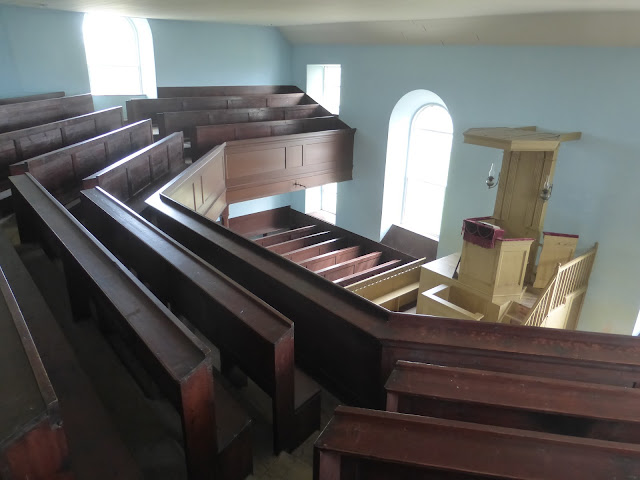 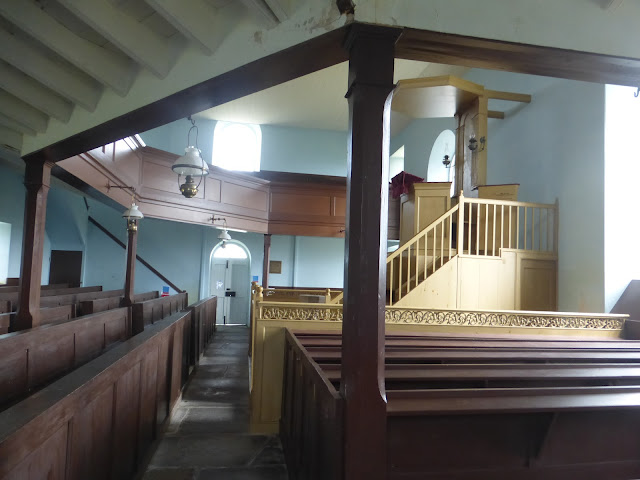 It's the interior, however, that makes you catch your breath. The Scottish Church (or Kirk) is of course Presbyterian, which means that the key element of services is the word of God in the form of the Bible, so the pulpit is the focus of the buildings. An English church of this (or almost any other) period would have been orientated towards the altar in the east; Sandwick kirk is orientated towards the pulpit in the south, not (I think) for doctrinal reasons but simply to accommodate as many seats as possible.
There are 548 seats for the congregation, each notionally a mere 18" (46cm) wide, which would have been sufficient for about half the adult population of the parish. They are artfully crammed together in two tiers of banked benches, arranged in a demi-octagon around the pulpit. It's easy to imagine them full of Victorian Orcadians, all eagerly leaning forward to catch the sermon. (If there was a communion table in the southwest corner, the logistics of getting half a thousand people to it and back to their seats must have been formidable. But apparently communion would have been taken to the congregants rather than vice versa, which would still have been quite an organisational feat. The communion table would reside in the manse (the Minister's house) when not in use in the kirk.)
The structural timbers, including the posts supporting the gallery, are from the Baltic, while the benches and pulpit are made of 'good American timber'. (Orkney itself has been mostly treeless for at least the last five thousand years; the wood that prehistoric peoples had available was mostly that which had drifted across the Atlantic from the Americas, so it's pleasing that their distant ancestors followed this tradition.) The pulpit (which is two-, not three-deckered as some authorities state) is absolutely commanding. It's made of paler wood* which of course makes it stand out, as does its towering size; the eyeline of the standing preacher isn't much below that of the seated congregation in the gallery. The only hint of extravagance in the whole utilitarian, even austere, building is the carved decoration running along the top of the partitions enclosing the pulpit, benches for the elders and small font. (Did some find the carving dangerously frivolous?) Thus all ears and eyes are turned to the Bible (and the Minister's interpretation of it).
Less than a decade after the church first opened the Rev Clouston was complaining again. In 1845 he wrote of it: 'Though so recently built, I cannot say that its present state of repair is good, for being founded partly on the foundations of the old church, and partly on soft sand, the wall cracked so far, that the arch of the window came down, and that being rebuilt, it has again cracked in such a manner, that it gives little prospect of durability.' Fortunately, time has proved him wrong. (The conventions concerning the usage of commas have changed in the same time.)
The kirk's main career lasted fractionally less than a century, until 1935 when the Church of Scotland and the United Free Church were amalgamated. To begin with services alternated between St Peter's and the former United Free Church in Quoyloo a couple of miles away, but the latter was very much more convenient and by the 1960s St Peter's had mostly fallen out of use and became a liability to the parish. In 1988 the Presbytery of Orkney recommended that the congregation should seek permission to demolish the building.
Fortunately, the architectural and historic value of the church was recognised in time, and the Scottish Redundant Churches Trust bought it for £1 in 1998. A quarter of a million pounds was raised, which resulted in a sensitive restoration in 2002/3. (Electricity had never been installed in the church, the lighting being by oil lamps. During its years of closure the lamps 'disappeared', but an appeal during the restoration apparently brought all but one of them back to their home, where they still hang.) It hasn't got the antiquity of many of the other sites on the islands, but in its own way it is just as important and evocative as them.
Times change, and the way of life encapsulated by St Peter's kirk, when rural areas were relatively heavily populated and nearly everyone frequently went to church, is almost as dead and distant as that of Skara Brae across the bay.
The church is open every day from April to November, and occasional events are held there despite the absence of electricity. 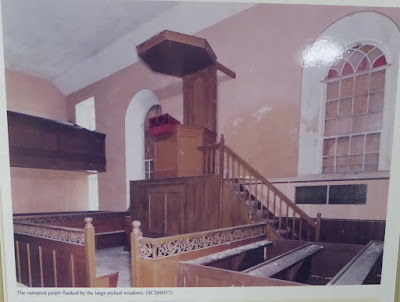 * Old photographs displayed in the church show the pulpit looking much darker, so perhaps its present appearance is a result of its varnish being stripped. 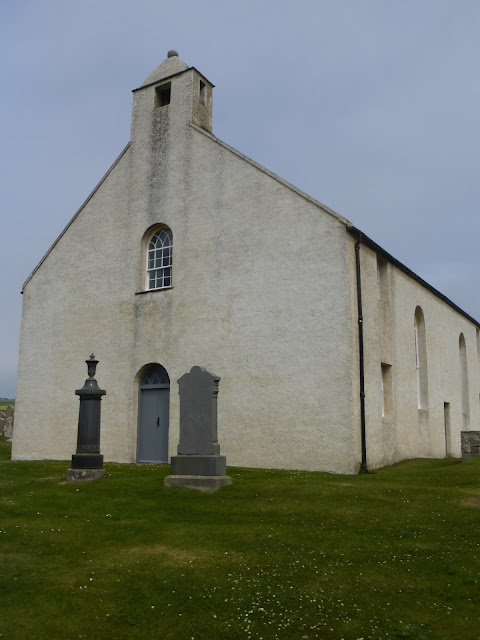 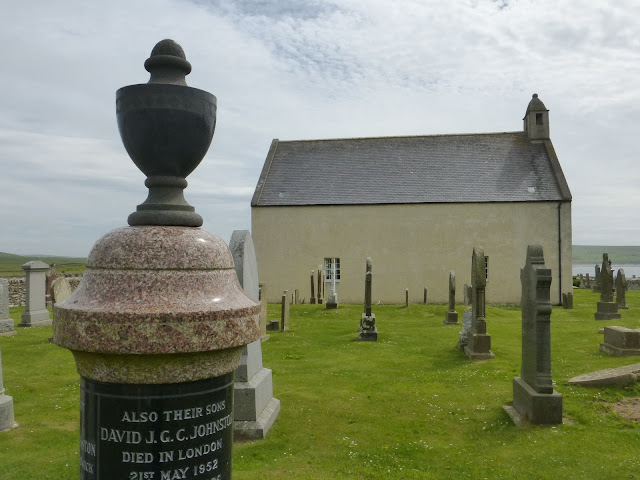 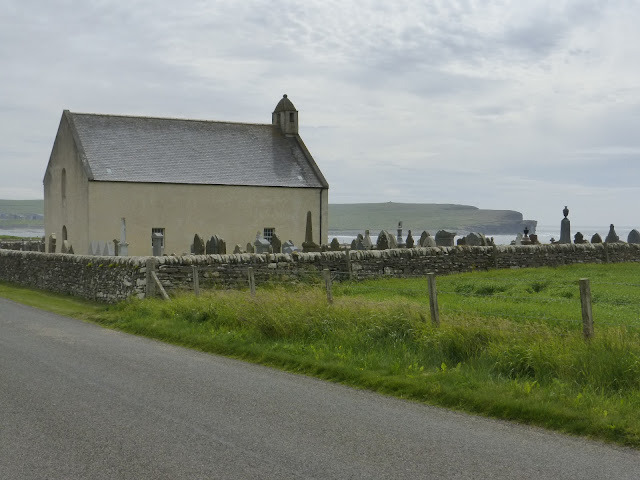 Posted by David Gouldstone at 10:48