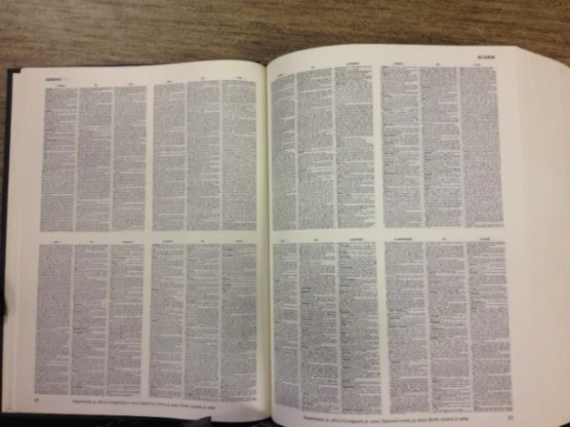 I used to own a copy of the 1971 Compact Edition of the Oxford English Dictionary, in which the text is micrographically reduced so that four pages fit on one page, and the original thirteen volumes in two (admittedly cumbersome) volumes. (The text is tiny, but I used to be able to easily read the headwords, and the smaller writing with a bit of squinting, without even using the supplied magnifying glass, whereas now I need glasses for anything smaller than screaming headlines.)

I mention this because I recently thought about a section at the back, 'A List of Spurious Words'. This consists of words that crept into previous dictionaries despite being mistakes (mostly misprints or misreadings), that is, they were never real words at all. You've got to love the idea of a dictionary devoting valuable space to words which are included because they don't exist. It's like visiting a menagerie of lexical unicorns.

Take 'munity', for example, which first appeared in 1648 as a simple misprint of 'mutiny', in Walter Montague's Miscellanea Spiritualia, a book of 'devout essays'. The mistake is corrected in the errata list in the same volume, but nevertheless 'munity' found its way into dictionaries, being assigned the meaning 'security, freedom'. In 1818 H J Todd included it in his updating of Johnson's famous dictionary, and in 1854 it appeared in Webster's American Dictionary of the English Language, and is found in later similar works. However, despite 'living' in captivity, there seems to be no record of the word ever being found in the wild. (The confusion was probably multiplied because there is a word 'munite' in Latin and Italian, meaning 'to wall round, fortify', which was used as a genuine English word with this meaning for several centuries, though it's now obsolete.)

When I was an English teacher I used to have photocopies of the 'List of Spurious Words', and every now and again I'd hand them out to a class and ask them to invent definitions for these figments of the literary imagination, and use them in stories or articles, with sometimes rib-tickling results. Earlier today I tried to find a copy, but I seem to have thrown them away. Luckily, I had the bright idea of consulting Doctor Google, and found a forum discussing this aspect of the OED in 2006.*

There are actually two lists of non-words (rather than just one, as my memory had it). The first is of 'the more important spurious words' (it's doubly delightful that some non-existent words can be more important than others); all these words are given a few lines of explanation. The second list is of about two hundred 'other spurious forms' which are included in the main dictionary.

Here's a complete list of the words in the first category (without the explanations); I've written the ones I think particularly delicious and worthy of recycling in bold:

If I had to pick one favourite, it would be 'momblishness'. This started as the French for forget-me-nots (the flowers), 'ne-moubliemies', which was mistranscribed as 'momblynes', which in turn sounds as if it's related to 'mumble'. So it acquired the pseudo-meaning 'muttering talk'. I propose that it be revived with the meaning 'the act of deliberately and repeatedly avoiding answering a question by pretending to think that another question has been asked', as in 'The government minister used all his momblishness in his interview on the Today programme this morning.' 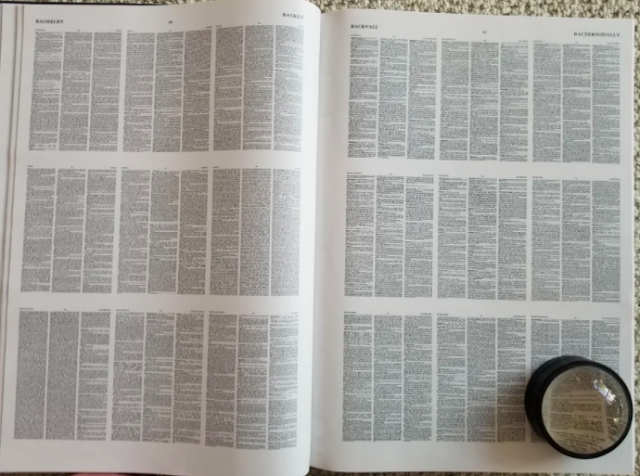 The 1971 edition was seriously out of date (though four supplements, reduced to one volume, slightly remedied this); none of the entries dated from later than 1928, and some were as first printed in 1884. Consequently I acquired the 1991 Compact Edition of the 2nd edition, an even more impressive work of scholarship and technology. (It was in this that I found the meaning of 'indagation'.) There are no fewer than nine pages per page, and amazingly the twenty volumes of normal fonts are squeezed into just one. Someone with good eyesight can probably just about manage to read the headwords without artificial aids, but the rest of the text definitely requires magnification.**

The 'List of Spurious Words' is gone from this edition. When I first noticed this I despaired. All those lovely unicorns sent out into the wicked world to live or (most likely) die. However, the OED has a policy of never deleting a word once it's appeared within its pages; all the spurious words are still there in the main text, just not in a list on their own at the end. And so they cling on like Panamanian golden frogs, extinct in their natural habitat but artificially conserved. And I for one am glad of that.

* Found at: https://alt.usage.english.narkive.com/Ru8j046y/spurious-words-in-oed I'm especially grateful for the contribution by Mark Brader.
** The 2nd edition has in turn long become outdated. The OED is now online; anyone with a UK library card can access it for free.

Posted by David Gouldstone at 17:34