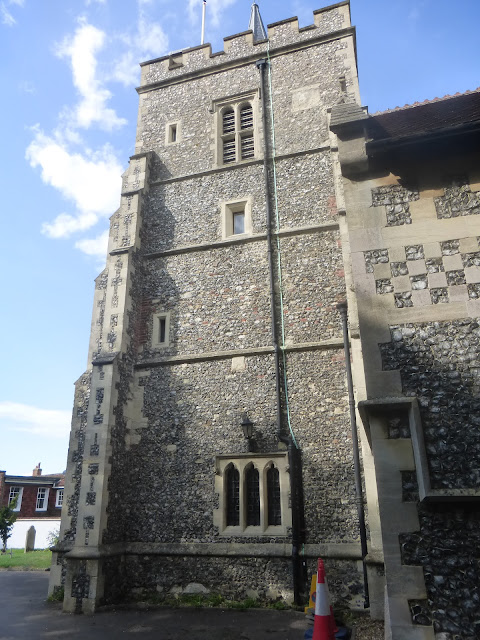 Essendon church is, externally at least, a handsome (if a little pompous) Gothic Revival building in the style of the early 14th century, dating from 1882-4. (The tower is 15th century.) The limestone chequerwork relieves what would otherwise be unrelenting expanses of knapped flint (never the most attractive material). The architect was William White (1825-1900), who restored Bengeo and Sandridge. 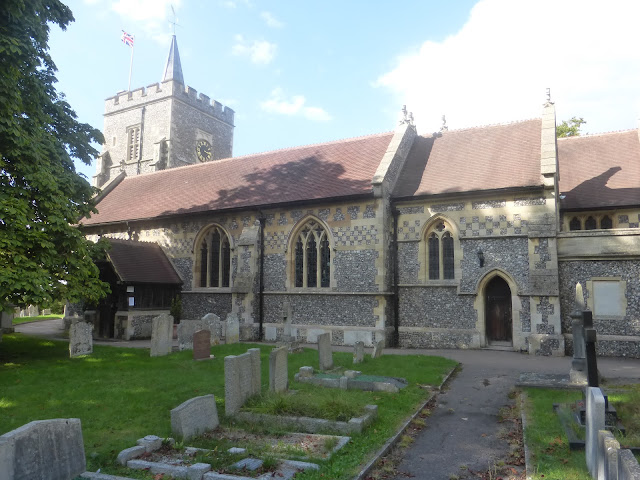 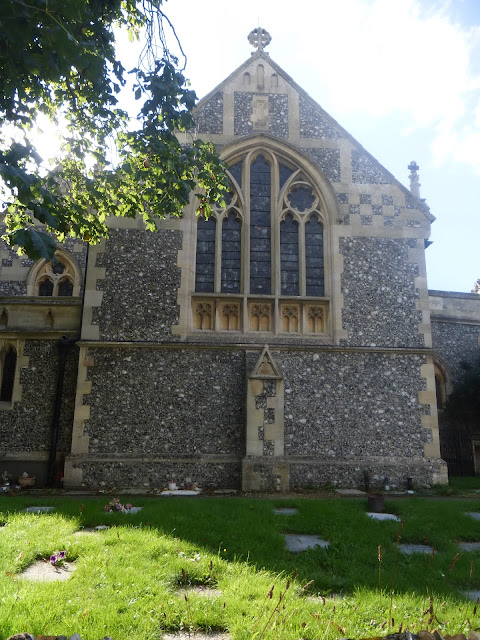 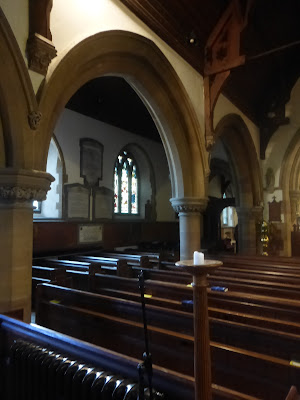 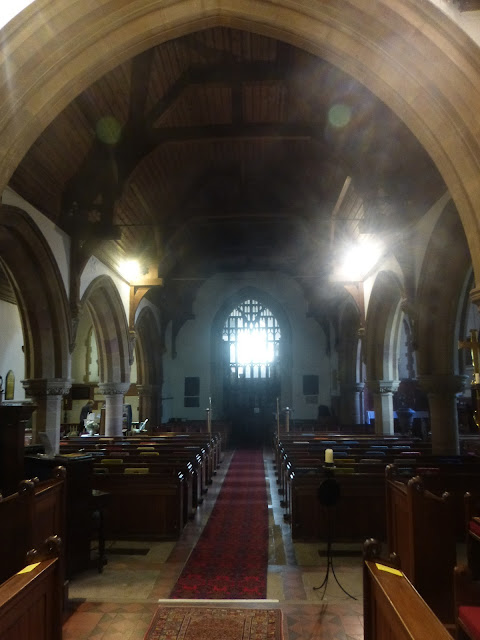 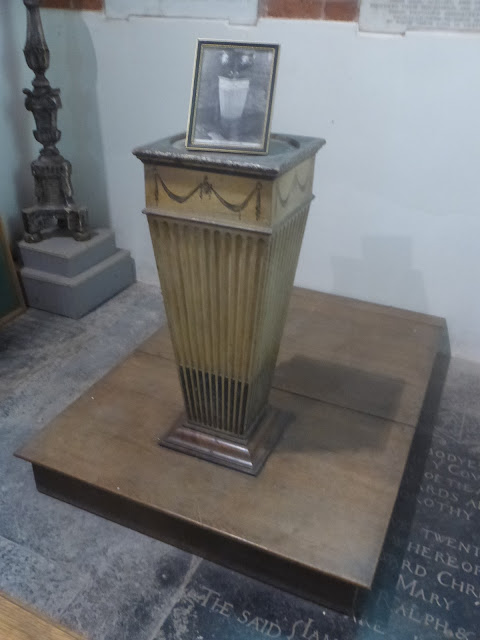 The interior is one of the most Stygian I know, even on a bright sunny day with the lights on. There is one outstanding object that makes a visit most desirable: this is the black basalt jasperware Wedgwood font of 1778, one of only five made. Unfortunately it's not currently on display. (A photo and more information about it can be found here.) Instead the original wooden pedestal bears a photo of itself and the font, like a piece of conceptual art. 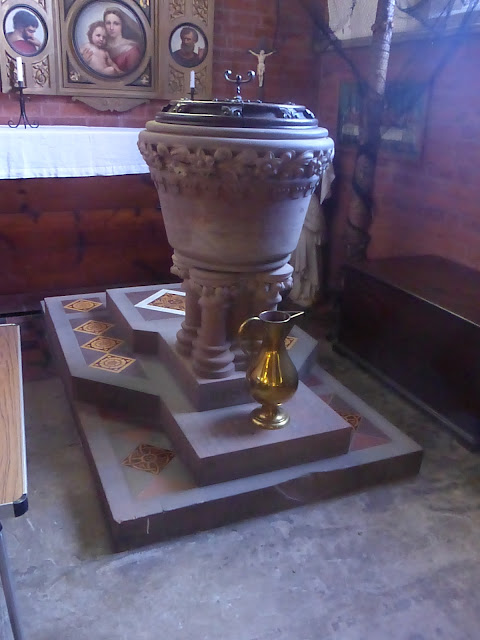 The chunky Victorian font is by Harry Hems (1842-1916), who also carved the capitals of the arcades. 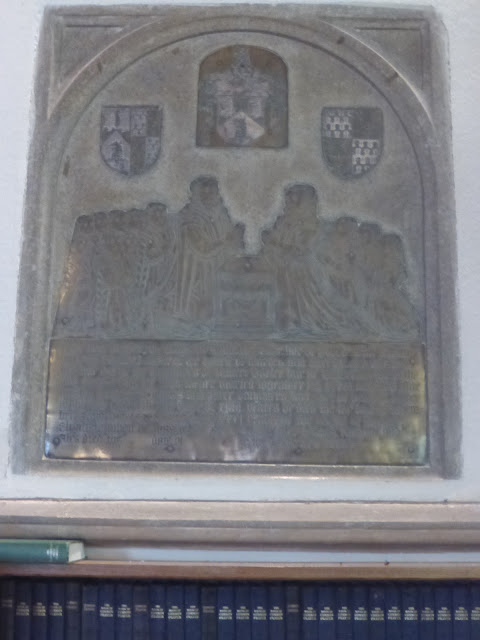 There are a few monuments from the old church before it was rebuilt. This brass is to William Tooke (d.1588) and his wife Ales (ie Alice); they were married 56 years and had nine sons and three daughters, all of whom dutifully kneel with their parents. 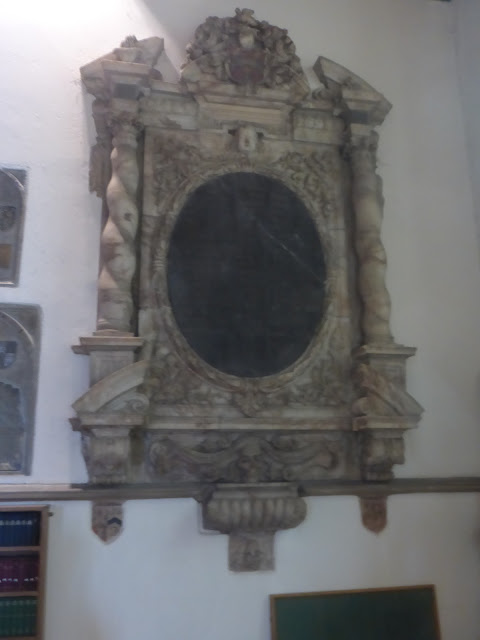 The best object in the church (given that the Wedgwood font is only notionally present) is this elaborate monument to William Prestley (d.1664). It has a vestigial pediment not only at the top but also at the bottom, an outrageously baroque conceit. 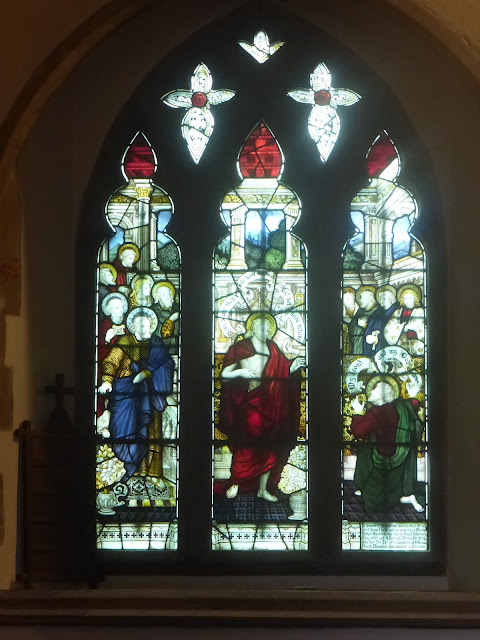 You might hope that, whatever it lacks, the church at least contains some good Victorian stained glass. Suffice it to say that the only window I thought it worth taking a picture of is this one from 1893 showing Doubting Thomas, and it's by Kempe; any regular readers this blog might have will be aware of my antipathy to almost everything he laid hands on. 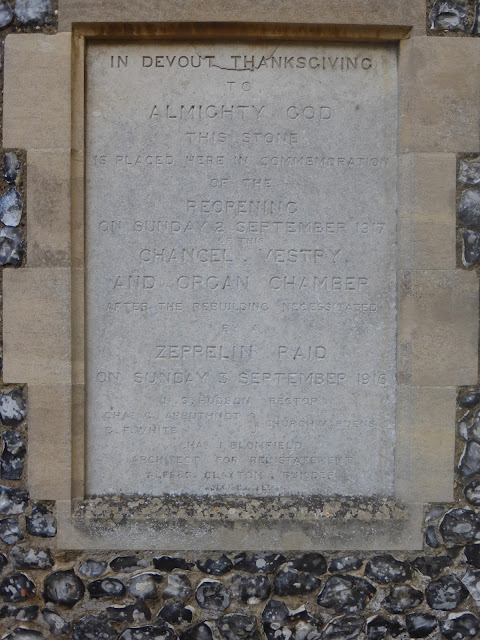 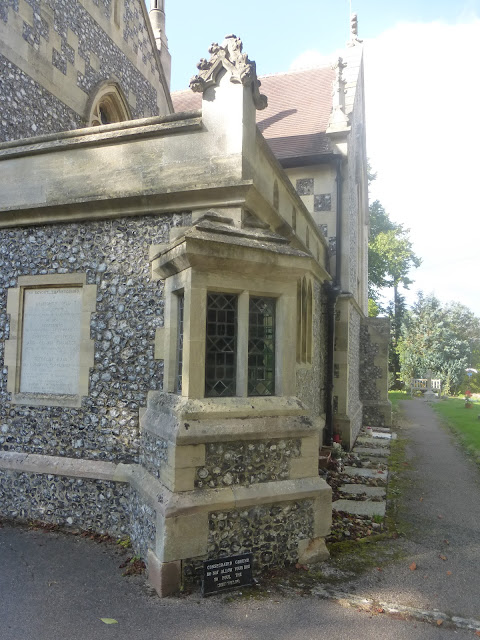 On the night of 2/3 September 1916 the largest Zeppelin raid of the First World War took place; a force of fourteen airships attacked London, the south east, East Anglia and the east coast as far north as Hull. Zeppelin L16 crossed the Norfolk coast and dropped bombs near Norwich and Bury St Edmunds, and then in or near Harpenden and Redbourn in Hertfordshire; these all proved to be almost entirely ineffectual. In the early hours of Sunday the third, the crew of L16 witnessed another airship, SL11, being pinpointed by searchlights and fired at by anti-aircraft guns, and turned away to avoid being attacked themselves. Finding themselves over Essendon, they dropped 25 bombs (though it's unclear if this was an intentional attack or whether they were simply lightening their load in order to be able to escape more quickly; if the latter, it's ironic that their only unaimed bombs were the only ones to cause any significant damage). Later they dropped another bomb on Aston, near Stevenage, and one more near Bury St Edmunds.
Meanwhile, airship SL11 (which had a wooden frame and was thus not strictly a Zeppelin) had been attacked by a B.E.2c biplane flown by Lieutenant William Leefe Robinson and crashed in Cuffley, killing all sixteen crew members. This was the first airship to be brought down over Britain, and Robinson was immediately awarded the VC. (Sadly, although he survived the war he died in the Spanish flu epidemic, in December 1918, aged only 23.)
Zeppelin L16 destroyed three cottages in Essendon and several others were damaged; tragically, the two daughters of the village blacksmith (aged 26 and 12) were killed. The east end of the church was also hit, as a plaque records, and was rebuilt within a year by Charles James Blomfield (1862-1932) (the architect to Salisbury and  Chester cathedrals). One curious feature of this is at the south east corner where there's what looks like an angle buttress with a window in it. 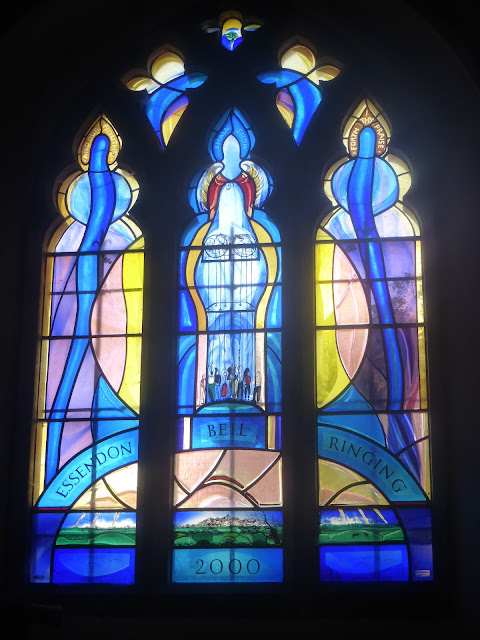 The 21st century has made two major additions. The bell ringing window, installed in 2003, is a big disappointment. The colours are feeble, and I can't be the only person who thinks that the shape in the central light is like a condom, and those in the two outer lights like monstrous earthworms. 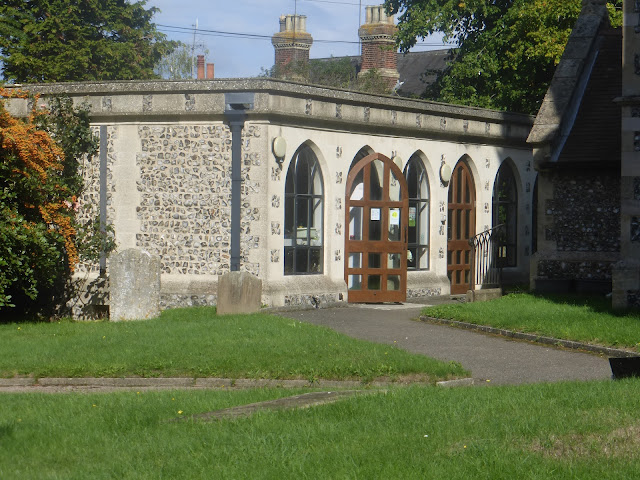 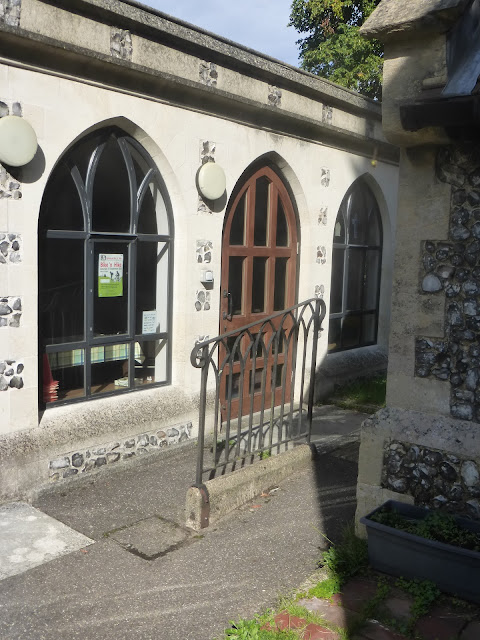 Much better are the church rooms, by David Kirby, from 2001-3, which echo the style of the church very adroitly.
Essendon church is usually locked. 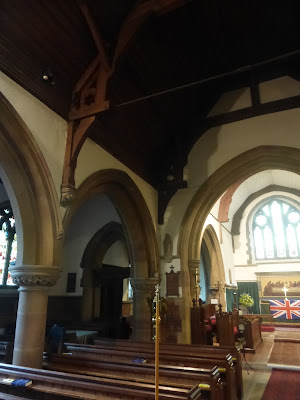 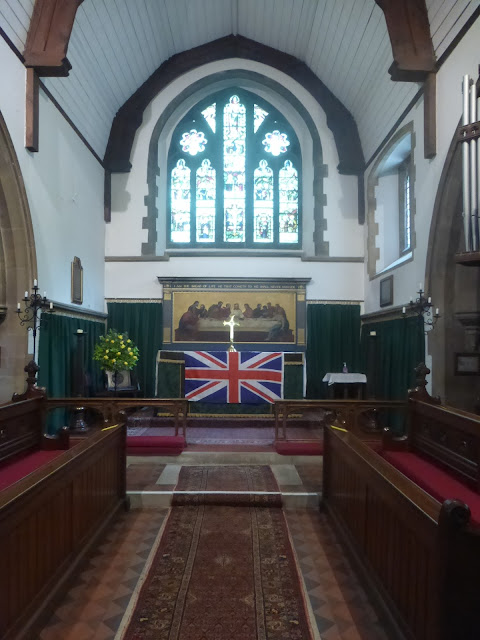 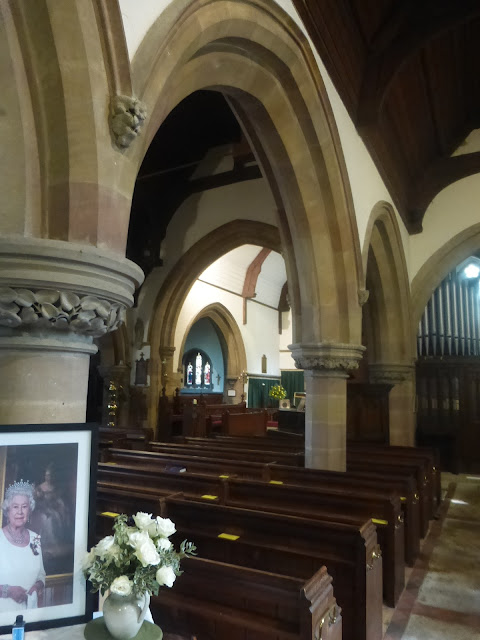 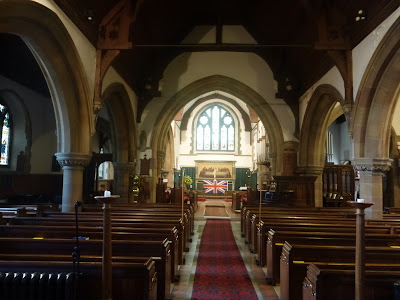 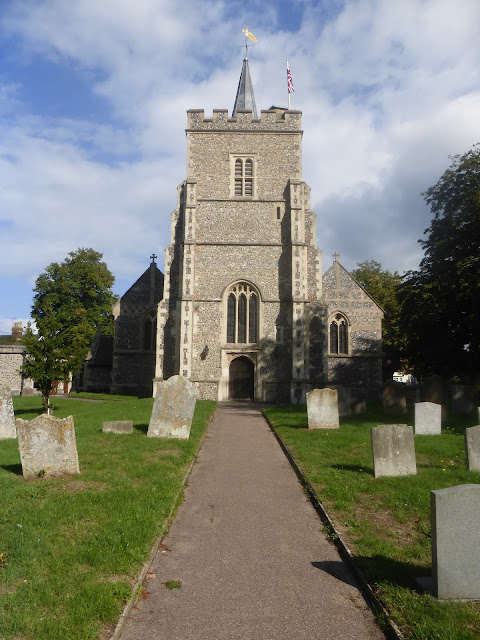 Posted by David Gouldstone at 17:39