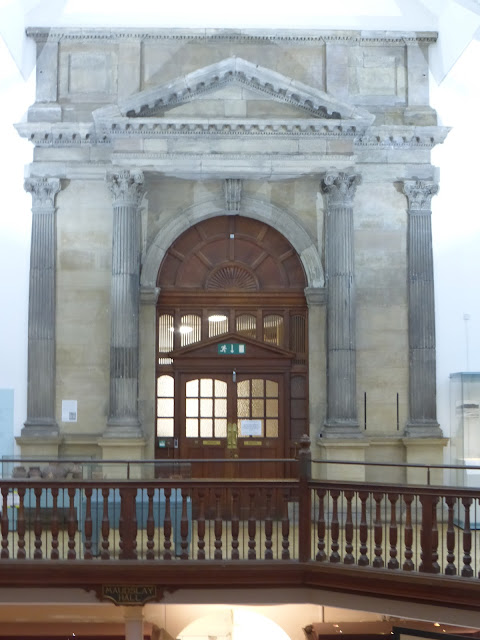 Over the last few days I've been writing a post about the Gothic Survival and Oxhey chapel. It seems to be an appropriate time to take a look at what styles, other than Gothic, could have been available to those who designed and built it.

Classical forms of architecture, filtered through various European Renaissance styles, began to arrive in England from the 1520s, and by the 1570s were well established. However, the few church buildings, or additions to existing medieval churches, of the latter half of the 16th century continued to be mostly in a simplified form of Gothic (with occasional exceptions, such as the west porch of Sunningwell, Berks, of c.1551, which combines Renaissance details with Gothic). 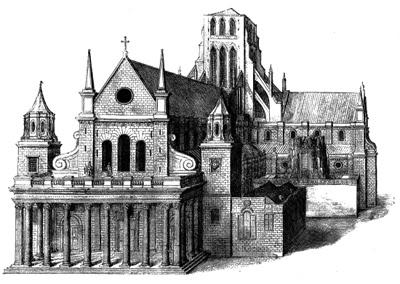 The first English architect to fully embrace classicism was Inigo Jones (1573-1652). He built the first fully classical church in the country, St Paul's, Covent Garden, in 1631. From 1634 to 1642 he was involved in repairing Old St Paul's Cathedral, including building an entirely new classical west front (which was of course destroyed, along with the rest of the cathedral, in the Great Fire of 1666).

Much less well-known than either of these projects is Jones' chancel screen for Winchester Cathedral, made in 1637-8. It's little-known because it was removed in 1820 and replaced by a stone Gothic screen designed by William Garbett. Garbett's work lasted only half a century before being in turn replaced by a wooden Gothic screen designed by Sir George Gilbert Scott. 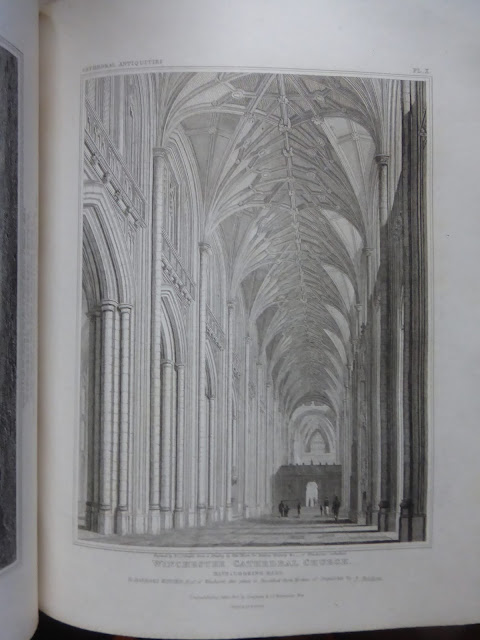 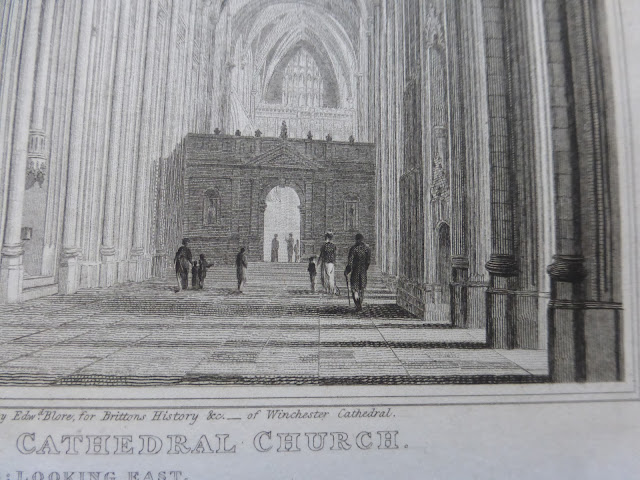 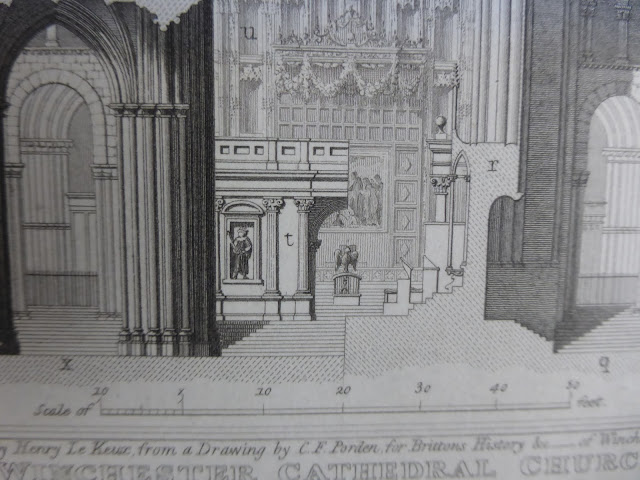 Pictures survive to enable us to see what it looked like in situ. I think it suits the space rather handsomely. When it was replaced, fortunately it wasn't destroyed but put into store in the crypt.

In 1910 Sir Thomas Graham Jackson (1835-1924) was hired to build the Museum of Archaeology and Anthropology in Cambridge. He was already, from 1899, the consulting architect for Winchester Cathedral, and had the idea that the central section of Jones' screen could be incorporated into the fabric of the new building. And that's where it remains today, accompanied by anthropological artefacts from around the world.* 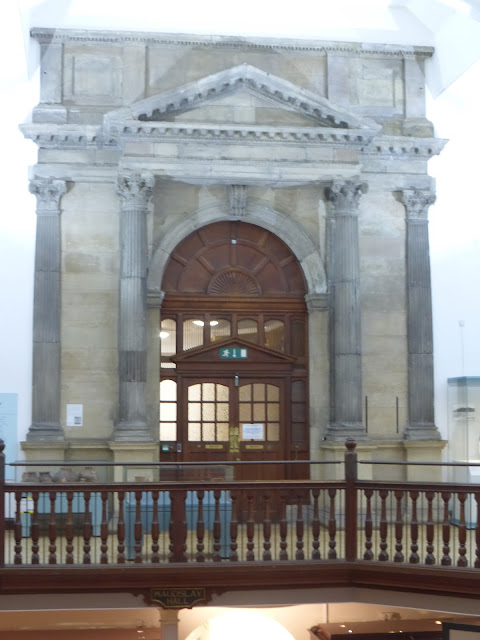 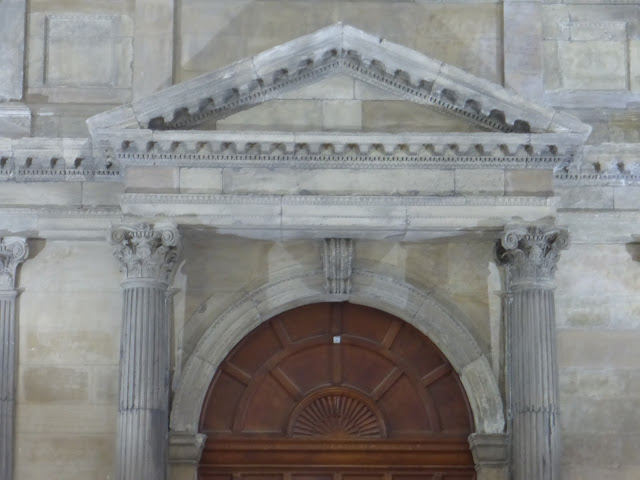 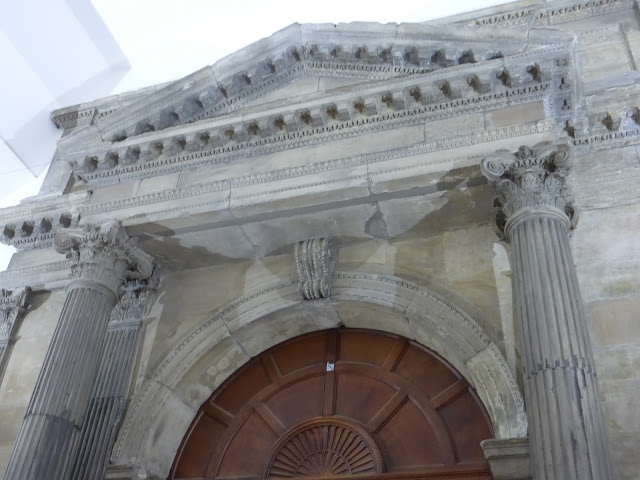 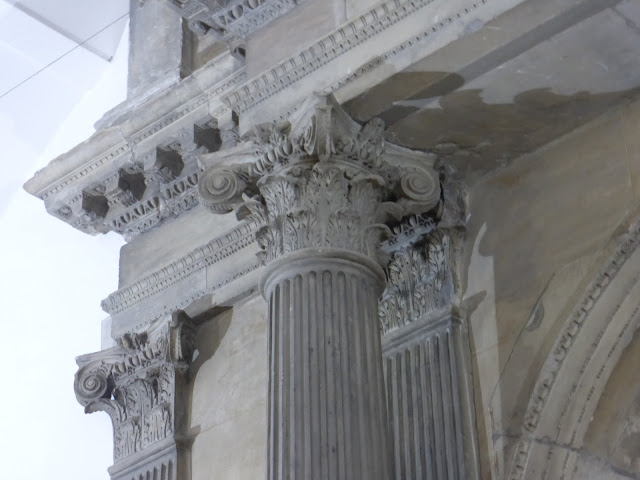 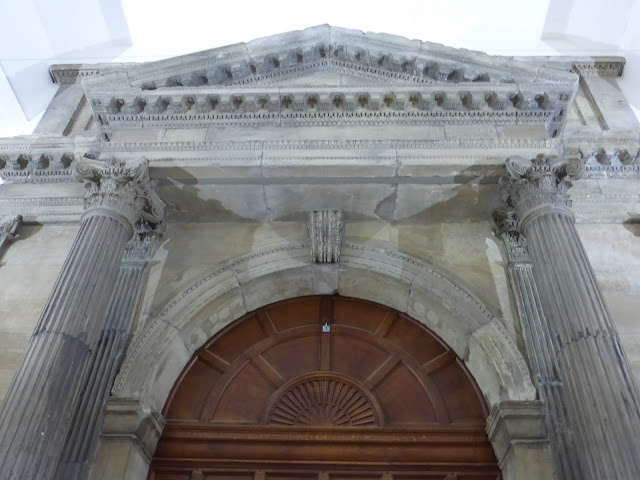 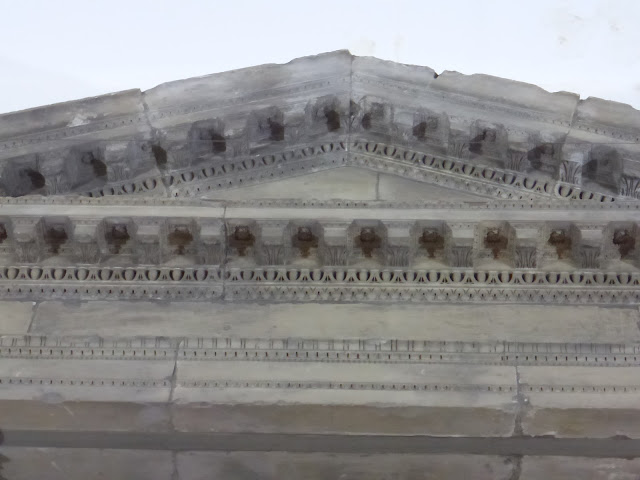 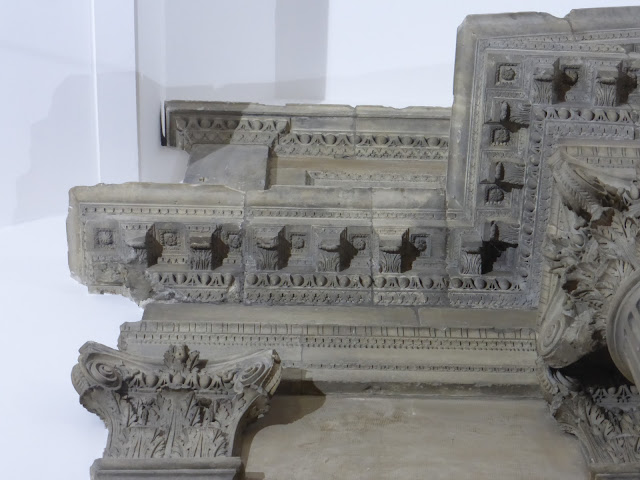 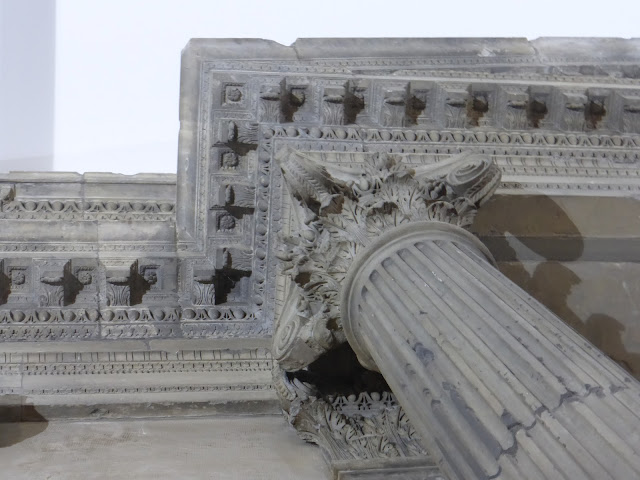 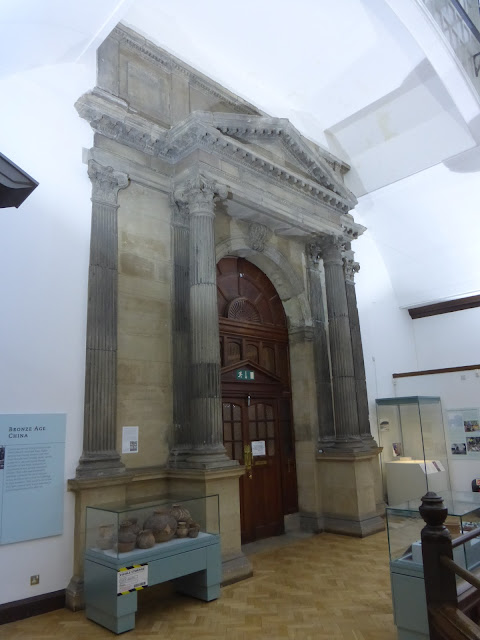 The reconstructed central section, comprising a little more than a third of the whole (the rest is still in the crypt), lacks the urns and also, most unfortunately, the symbolic female figures reclining on the pediment seen in the Woodfield picture. (One of the Britton pictures (though not the other) also shows the urns.)

Given that this is a pioneering work, it's surprising that it's so confident and accomplished. Jones had been to Italy in the party of Lord and Lady Arundel in 1613-14, and took with him his copy of Palladio's 1570 book Quattro Libri dell'Architettura, in which he made notes. (This copy still exists in the library of Worcester College, Oxford.) He clearly learnt a great deal from this experience, and this is reflected in the Winchester screen. Not only is the design absolutely convincing, but also the workmanship; the mason or masons who carved it must have been very familiar with the conventions of the Corinthian order (or Jones was able to direct them very well).

When Jones erected the screen in 1637-8 it was presumably admired by the educated. (It's hard to know what 'ordinary' people thought about it as they have left fewer records.) Everything associated with ancient Greece and Rome was considered refined and emblematic of civilisation. Medieval art and architecture came to be seen as coarse and even barbaric. The term 'Gothic' was originally used (in the later 17th century) as an insult (as we use 'vandal' as an insult today). Consequently throughout the 18th century styles of architecture based on classical models dominated.

This began to change in the mid 18th century, when the picturesque elements of Gothic began to be appreciated. But as late as 1771 Tobias Smollett, in his novel The Expedition of Humphrey Clinker, could write these words:

As for the Minster, I know not how to distinguish it, except by its great size and the height of its spire, from those other ancient churches in different parts of the kingdom, which used to be called monuments of Gothic architecture; but it is now agreed, that this stile is Saracen rather than Gothic; and, I suppose, it was first imported into England from Spain, great part of which was under the dominion of the Moors. ...
The external appearance of an old cathedral cannot be but displeasing to the eye of every man, who has any idea of propriety or proportion, even though he may be ignorant of architecture as a science; and the long slender spire puts one in mind of a criminal impaled with a sharp stake rising up through his shoulder—These towers, or steeples, were likewise borrowed from the Mahometans; who, having no bells, used such minarets for the purpose of calling the people to prayers—They may be of further use, however, for making observations and signals; but I would vote for their being distinct from the body of the church, because they serve only to make the pile more barbarous, or Saracenical.

These are the opinions of a character, Mr Bramble, not necessarily those of Smollett. He's writing (as it's an epistolary novel) about York Minster; the reference to a spire is puzzling as although the central tower did once have a wooden spire it was long gone by 1771. Perhaps Smollett hadn't actually seen York, or was mixing it up with somewhere else. Bramble is rather irascible and also criticises the Georgian architecture of Bath, but there must have been plenty of people at the time who shared his view that Gothic is 'displeasing to the eye of every man, who has any idea of propriety or proportion'.

In the 19th century the vogue changed again, and classical architecture gradually declined in status while Gothic, which was being properly studied for the first time, came to be seen as the true expression of the British. In his 1820 book about Winchester Cathedral John Britton wrote this:

Consequently, as we've seen, the screen was dumped.

At first it was thought sophisticated and beautiful, then 'bad' and 'unsightly'. In the 20th century tastes changed again and it was rescued from its ignoble descent into the crypt and obscurity. Now it's on public display, but who knows how many people know it's there or look at it. Thus the whirligig of time brings in his revenges. 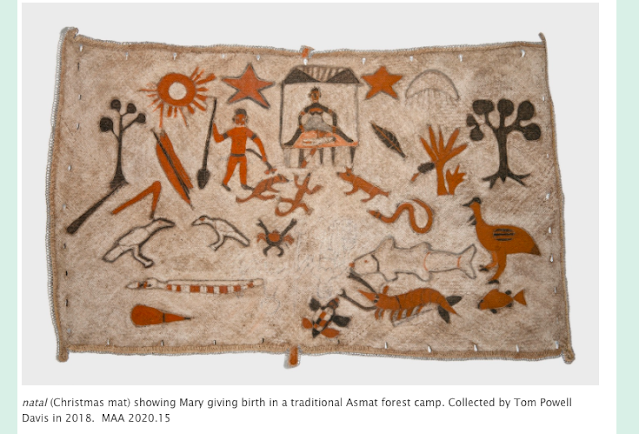 * Currently (until March 2021) near the screen is a small exhibition of contemporary woven mats made by Asman people of Papua, Indonesia (see here). They're Catholic, and their take on traditional Christian iconography is very eye-catching. In this Nativity scene, for example, the animals come to worship include fish, lizards, a jellyfish and a lobster. From now on I just don't think any lobsterless Nativity scene will cut the mustard. In fact I'm going to recruit a team of daredevil interventionist artists who are going to roam the country undercover, equipped with sacks of model crustaceans, intent on infiltrating a lobster into every Nativity in the land.

Posted by David Gouldstone at 18:40