Apostrophes shmostrophes - should we give three cheers or two hoot's for possessive apostrophes?

The Guardian reports that the Apostrophe Protection Society has given up the ghost. Its chairman has thrown in the towel, claiming that "ignorance and laziness" have bested him (though the fact that he's 96 might have something to do with it too).

Attitudes towards the APS might range from celebrating its members as brave defenders of correctness who are fighting against the armadas of illiteracy to preserve civilisation as we know it, to dismissing them as self-appointed busybodies, pedantic punctuation policemen. I freely admit that I like a nice bit of pedantry myself every now and again, but there are few things more annoying than a single issue pedant - someone with a bee in their bonnet about one isolated concern, while being indifferent to, or, more likely, ignorant of many other more pressing problems.

Language is clearly one of humanity's most vital and precious creations. It's understandable when some people feel threatened and angry when it is, in their estimation, debased. I'm exasperated about, for example, the current trend of calling any piece of music a "song". I can see how this has come about: nearly all the pieces of music most people listen to are indeed songs, and iTunes (and probably other streaming services) designate all their products as songs, so it's not surprising that this usage has become so common. But it makes no sense. Why don't we start calling all items of furniture "tables" and all items of fruit "oranges"? Imagine going into a shop and asking for "a small low table, with a back, that you can sit on", or "a long slightly curved yellow orange".

The fading away of the distinction between "shall" and "will" in the last half a century or so also seems to me to be a retrograde step; "I shall go out" means something entirely different from "I will go out." Perhaps we need a Shall/Will Protection Society.

Yet I can't summon up much indignation about the misuse of possessive apostrophes. My main justification for this indifference is that we manage perfectly well in speech without apostrophes, so we can do the same in writing. You might be objecting, "Hang on a minute, we manage without full stops and question marks in speech; do you suggest we abandon them too?" But we do 'hear' other punctuation marks: we hear full stops because the speaker's pitch lowers slightly, and he or she pauses, and we hear question marks because the pitch rises. We can't hear a possessive apostrophe, however.

The only times when possessive apostrophes are useful is when we need to distinguish between singular and plural, as in "the boy's books" or "the boys' books", and between noun phrase and statement, as in "lovers' talk" or "lovers talk". But much more often than not the context will make it clear what is meant, and if it doesn't then it's nearly always a simple job to rephrase the sentence to clear up the ambiguity. As I say, we seem to get by in speech; all we hear is "the boys books", and yet civilisation hasn't crumbled. It seems foolish to turn the preservation of apostrophes into a pseudo-moral crusade.

I'm not exactly the first person to point out that language changes, and that the English we speak and write today is the product of centuries of evolution. Trying to make every aspect of language - especially a mongrel language such as English - conform to strict logic is a mugs' game. There is no learned committee to rule what's correct and what's incorrect. Language is democratic; the usages favoured by the majority are, or become, '"correct". I might mutter darkly about the irrational shift in meaning of "song", but it won't make any difference.

The members of the APS, I should imagine, think that, on the contrary, there are eternal, almost God-given language rules that must be obeyed. History, however, throws much doubt on this attitude. Shakespeare, for example, seems to have seen no need to use possessive apostrophes. Here's an extract from As You Like It from my copy of the First Folio (only a modern reprint, sadly): 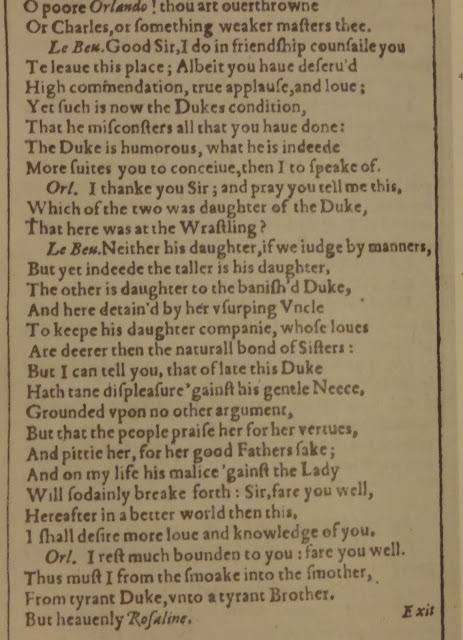 You'll notice that where the APS would have us write "the Duke's condition" and "for her good Father's sake", Shakespeare omits the apostrophes. And in case anyone claims that this was a mere printer's error, the same is true of the only extensive piece of handwriting we have that might well be by Shakespeare, the pages from Sir Thomas More. In line 33 he writes "this is the strangers case". No apostrophe.

The rules governing the use of possessive apostrophes decree that only nouns, not pronouns, require them. But in the 18th century, and into the early 19th, this wasn't the case. "It's" was used as a possessive, not just as an abbreviation of "it is" or "it has". Here's a photo of my copy of James Bentham's The History and Antiquities of the Conventual and Cathedral Church of Ely, published in 1771: 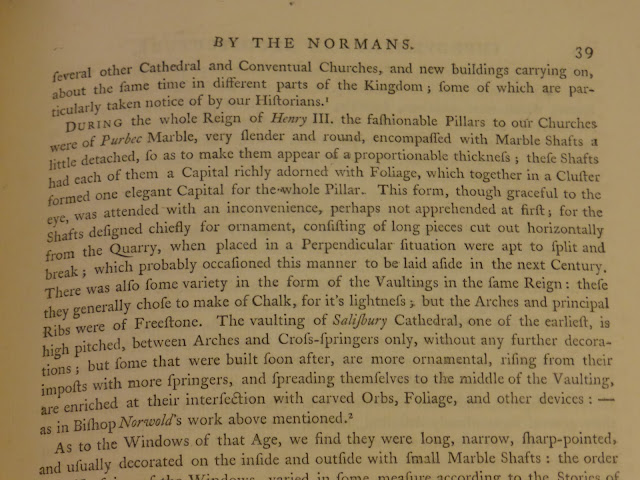 About two-thirds of the way down, in the middle of a line, Bentham writes "for it's lightness", with an apostrophe (and also a long "s", which isn't relevant here). And here's an extract from William Gilpin's Observations, Relative Chiefly to Picturesque Beauty, made in the Year 1772, on Several Parts of England, particularly the Mountains, and Lakes of Cumberland, and Westmoreland, (I can't get enough of these wonderfully prolix, punctuation-heavy Georgian titles),  published in 1788: 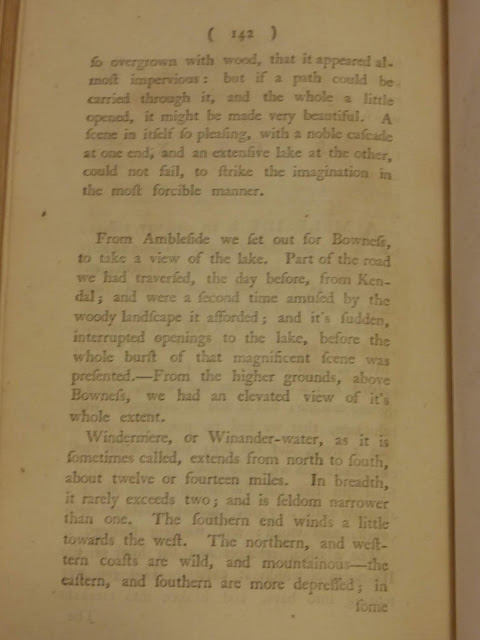 My point is that the rules about possessive apostrophes have changed over time; why shouldn't they change again? And if they change so that these particular punctuation marks disappear off the face of the page, I'm not going to lose any sleep over it. The only real function they serve is to add to the gaiety of nations by allowing me to make dad jokes about getting a free apostrophe with our meal when a menu advertises, for example, "pizza's". I'll be sad to give that up, but it's a sacrifice I'm willing to make. You can thank me later.

I shed no tears, however, for the end of the APS. Someone writing "apostrophe's" when they mean "apostrophes" seems to me a ludicrously trivial thing to get heated about. A wry smile is quite sufficient. There are far more serious threats to language that should concern us more urgently (let alone global warming, the rise of populism, etc). For example, I seem to be waging a solitary war against the "on a regular basis" construction, which is unnecessarily long, ugly and cliched. No one else seems bothered by this, I suppose because (or partly because) it seems to break no rules, and apostrophes have rules. People like rules, and like abiding by them. But saying or writing "on an eight-yearly basis" (which I heard on Radio 4 recently) is a much greater linguistic crime than writing "I'll bring apple's".

I've been using the word "rules" with regard to language, but in general I'm happier to call them "conventions", to make clear that they're not immutable or sacred or even, in some cases, sensible. Conventions are necessary and there's nothing wrong with them per se, but they're not like the laws that say that murder is wrong or that if your bails are knocked off while you're in the act of playing a stroke you're out (unless it's a no ball). They're more like the generally and mutually agreed but loose principles guiding, say, the length of men's hair or women's skirts. Most people abide by them, but if some chose not to, civilisation will endure, and they change continually. Hair and skirts get longer and shorter periodically, just as sometimes "it's" as a possessive is deemed to be correct and sometimes incorrect.

The language rules that preside over all others are:

Language should be clear.

Language should be elegant.

(These apply only to non-literary language. Literature frequently makes powerful use of controlled ambiguity, and on occasion is deliberately ugly to create certain desired effects.)  Most punctuation is strictly logical and thus more or less immutable, but everything else is convention, not rules (and certainly not laws).

Possessive apostrophes hardly affect clarity in writing, and needn't do so at all, and have no impact whatsoever on spoken language. In my opinion they're rather inelegant in writing, especially when they're huge on the fascia of a building. BARCLAYS BANK looks much neater than BARCLAY'S BANK. That priggish little tadpole wriggling its (or it's) officious way into the otherwise dignified lettering is annoying and unnecessary.

I really couldn't give two hoots (or even two hoot's) for misused possessive apostrophes. Apostrophes, shmostrophes - we'd be better off without them.

Posted by David Gouldstone at 19:39