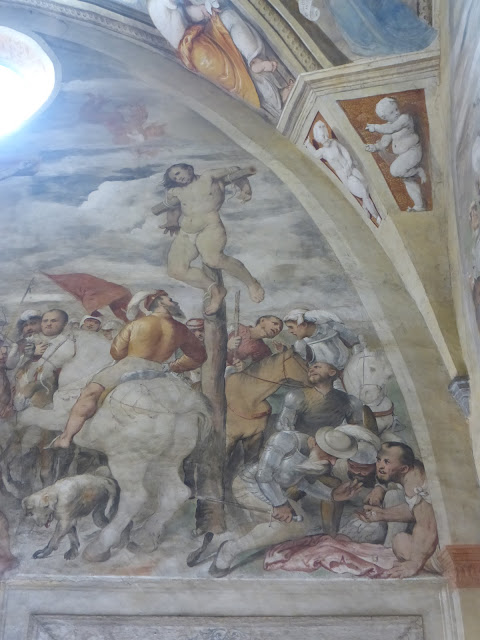 One sometimes has the impression that Italian Renaissance art consists solely of masterpieces. This idea is politely but firmly dispelled by a visit to the church of S Maria della Neve (St Mary of the Snows) in Pisogne, on the shores of Lake Iseo in Lombardy, Italy. The walls and ceiling are covered with frescos by Giralamo Romani (c.1485 - c.1566), known as Romanino, dating from 1534.

Their overall effect is certainly impressive when one first steps inside, but the more one looks, the more some details fail to convince. (Less than perfect restorations over the years may have played a part here.) The figures in Christ's Entry into Jerusalem and the Apostles Adoring the Virgin, for example, seem crudely painted, and the devils in the Harrowing of Hell just aren't very . . . well, devilish. According to the Rough Guide to the Italian Lakes the church is known as 'the Poor Man's Sistine Chapel', but this isn't mentioned in any of the local information that I've seen, and seems appropriate only in the same way that it's appropriate to say that American Budweiser is the poor man's Czech Budweiser Budvar.

On the other hand, there is plenty to enjoy here. In particular, I like the background figures in the big west wall Crucifixion - the dogs, the horses, the soldiers with their armour and lances. Furthermore, I can thoroughly recommend the pear and chocolate tart in the cafe by the lake.

More information (and a less jaundiced perspective) can be found here.