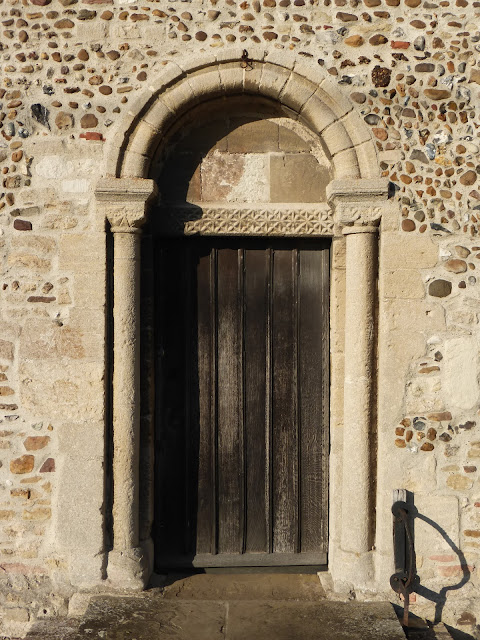 (Google has unilaterally removed the comments from readers that appeared after some posts. I'm sorry about this; it wasn't my doing. As far as I'm aware it is still possible to leave comments, and they shouldn't disappear without warning.)

When approaching a church I know nothing about, it always gives me a little extra thrill of pleasure and anticipation if entry is through a Norman doorway. Although many churches have Norman origins, most of these were rebuilt during the subsequent Gothic period and now many have only a few vestigial traces of their origins. I like Norman, partly because of its relative rarity, partly because it's dignified, and partly for its antiquity. Apart from a few dozen surviving examples from the Saxon period, Norman doorways are the oldest in the country*; stepping through them is like going back nine hundred years. And if the doorway is Norman, there's a chance that further features from that period will be found outside and in. 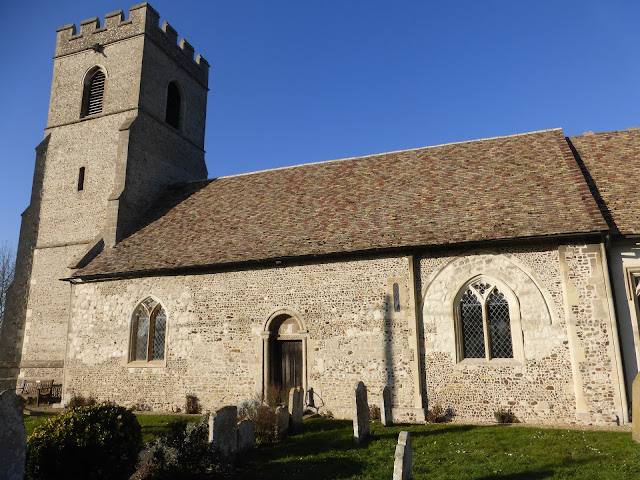 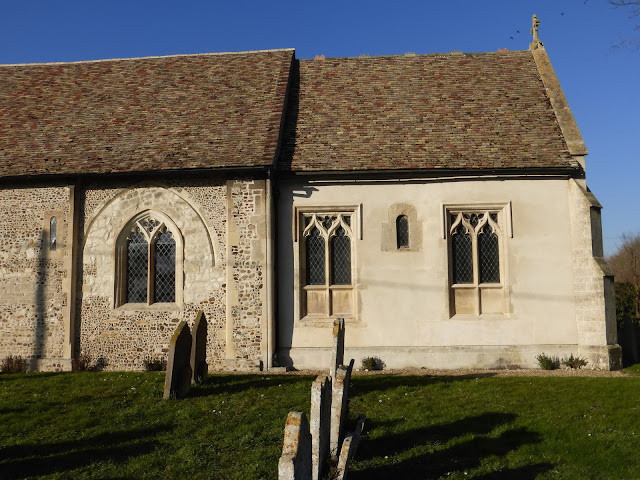 Hauxton church, Cambs, displays its Norman origins as you approach from the south. The doorway dates from c.1100, and although the tympanum is disappointingly blank and the capitals badly weathered, the lintel is attractive. It has two rows of small squares, each square containing a saltire (an X-cross), which altogether make intriguing patterns of interlinked bigger squares and diamonds. A nearby tiny window has another lintel with carved interlinked rosettes; the two were probably carved by the same mason who obviously enjoyed playing with geometry. The ghosts of long-demolished Norman transepts are also visible. 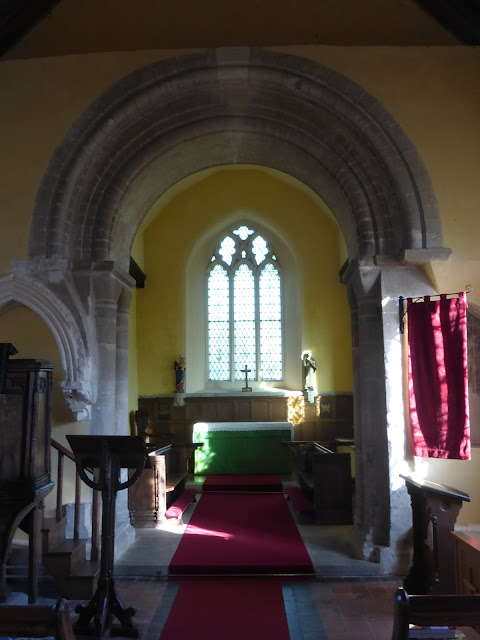 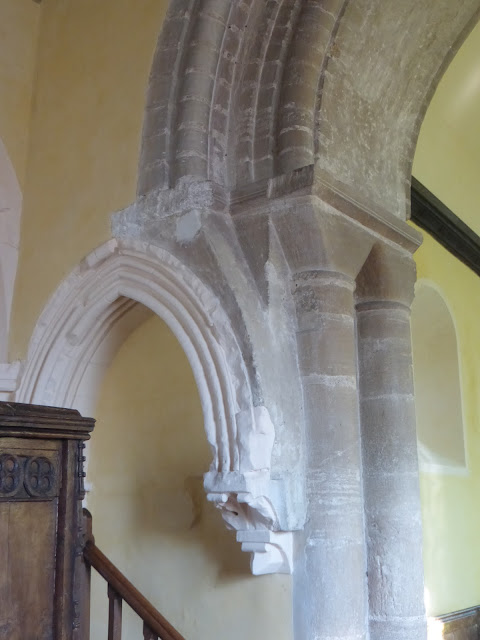 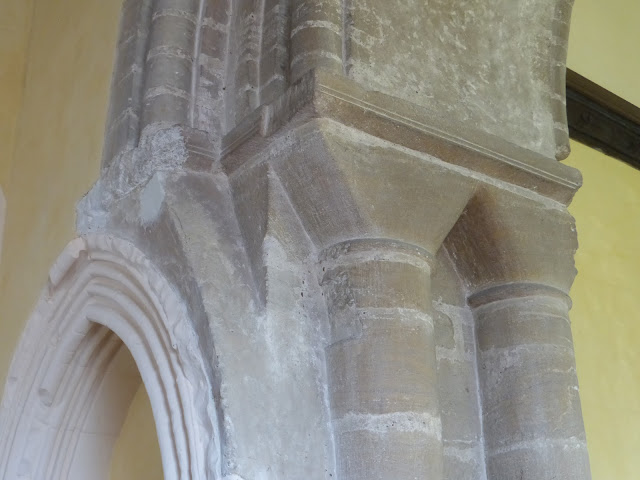 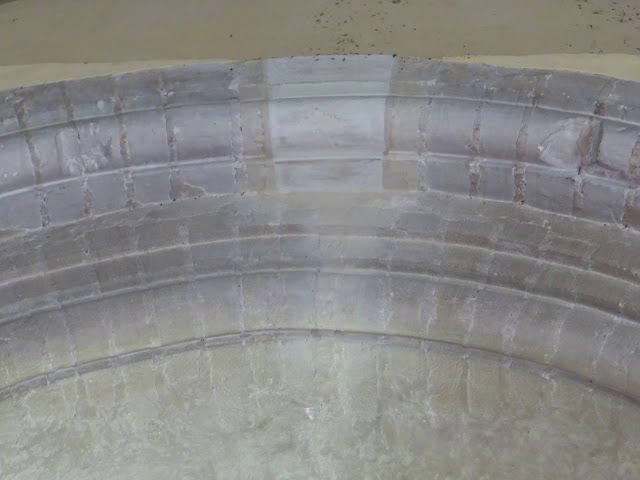 After this appetiser we wonder if there's more Norman Romanesque to be found inside. Push the door open, and a quick glance reveals that indeed there is. The most prominent internal feature is the large chancel arch, which is imposing though fairly plain. On its north side it's been partly cut away by a smaller 13th century arch that once sheltered a nave altar. 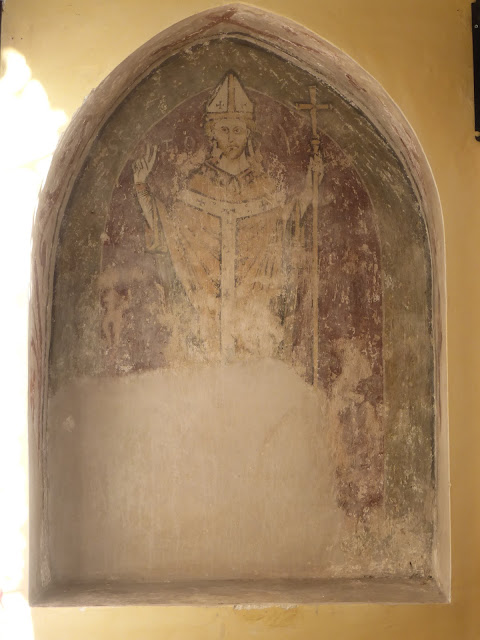 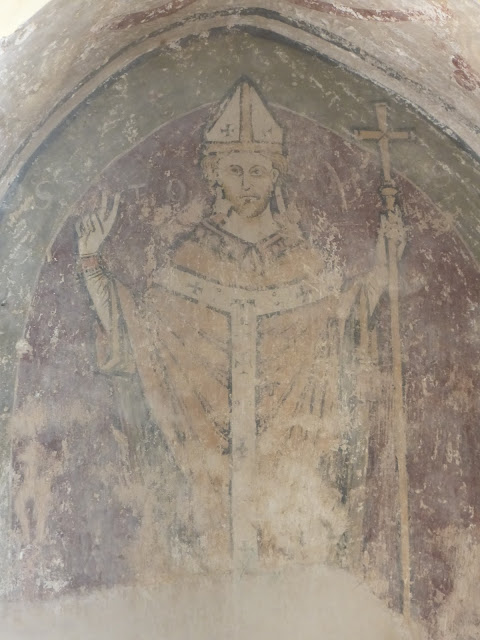 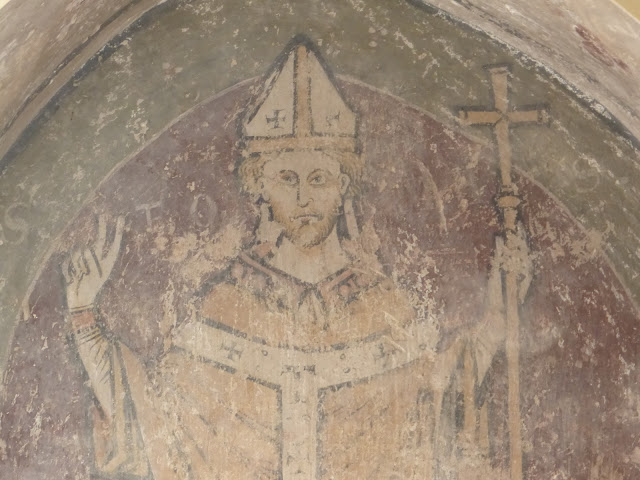 On the other (south) side of the chancel arch is an arched niche containing an early 13th century mural of St Thomas Becket, who was murdered (or assassinated) in 1170 and canonised in 1173. It's well preserved, though at some stage in its history something happened to the wall, and his legs from the knee down have gone. (The image was probably painted over at the Reformation, though I can't find any documentary evidence for this, and whoever kneecapped the saint had no idea what they were doing.) The picture is stylised and hieratical, of course, but nevertheless conveys an impression of humanity along with the stateliness. He blesses with his right hand and holds a crosier in his left; his mitre is balanced somewhat perilously on his head. 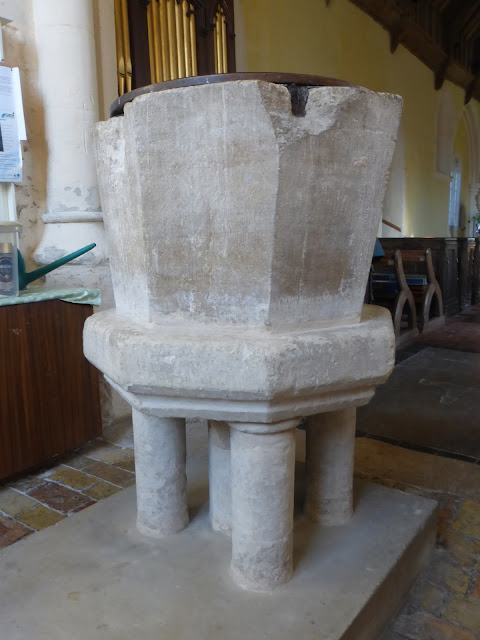 The font, which has taken a battering at some time in its existence, is dated to c.1300 by Pevsner, but looks rather earlier to me (it's included in the Corpus of Romanesque Sculpture in Britain and Ireland). 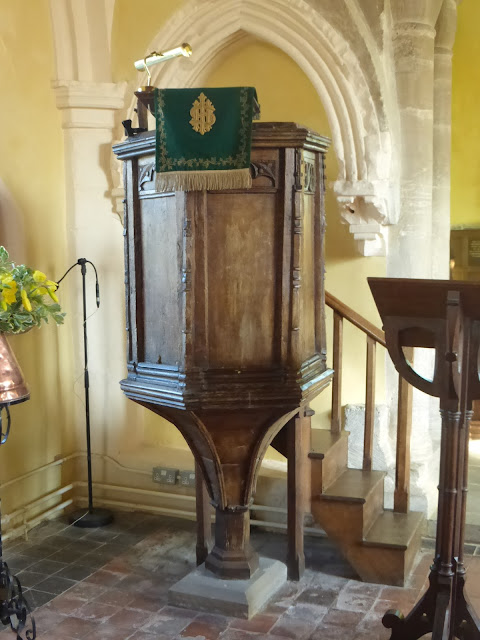 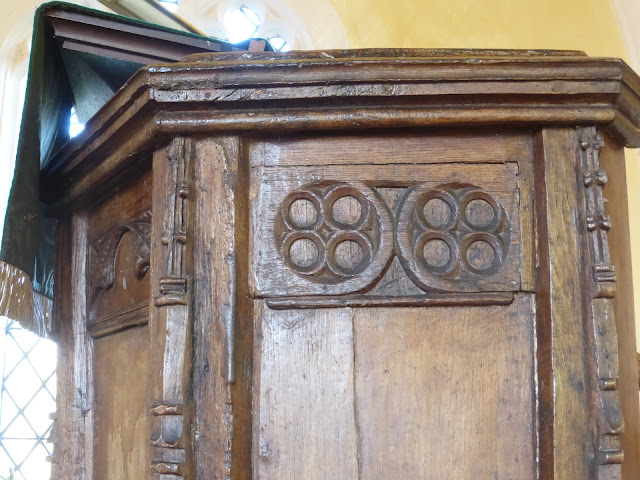 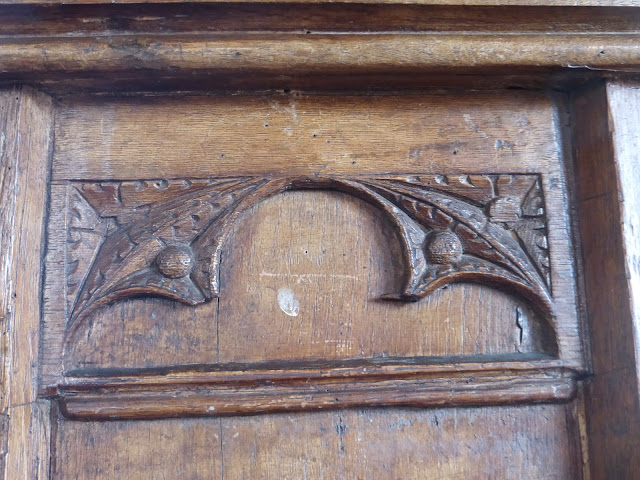 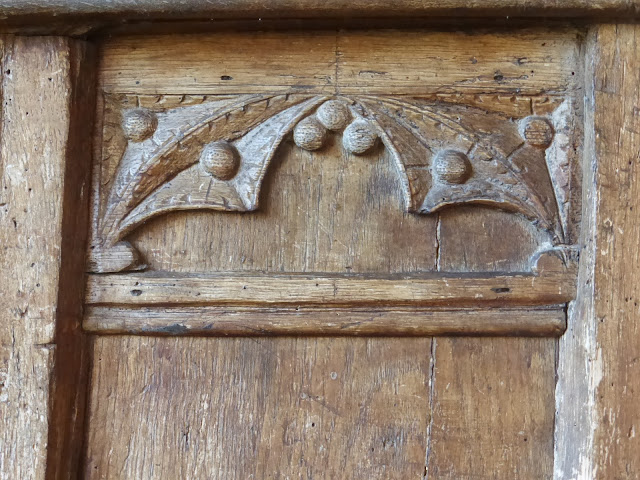 The pulpit is 15th century, and thus a relative rarity. It's clearly the work of a jobbing carpenter rather than a master craftsman, and all the more loveable for that. And that's an adjective that could well be applied to the whole church. 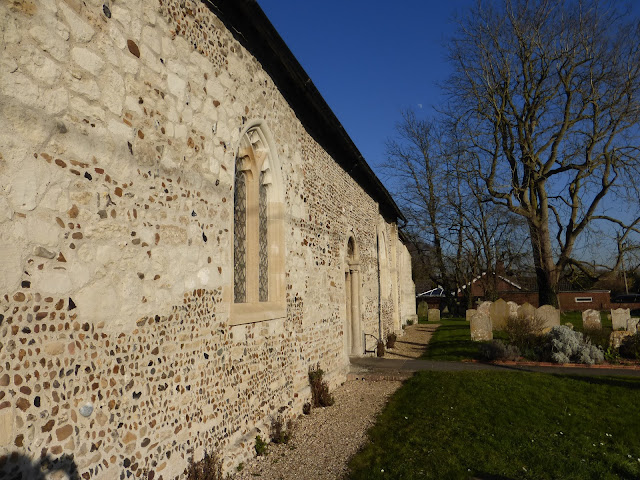 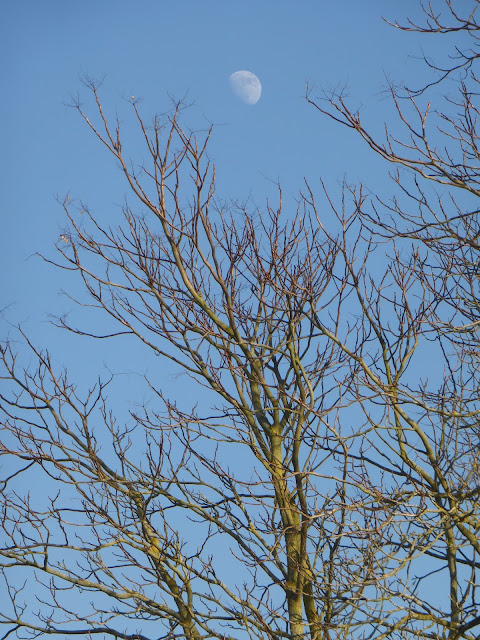 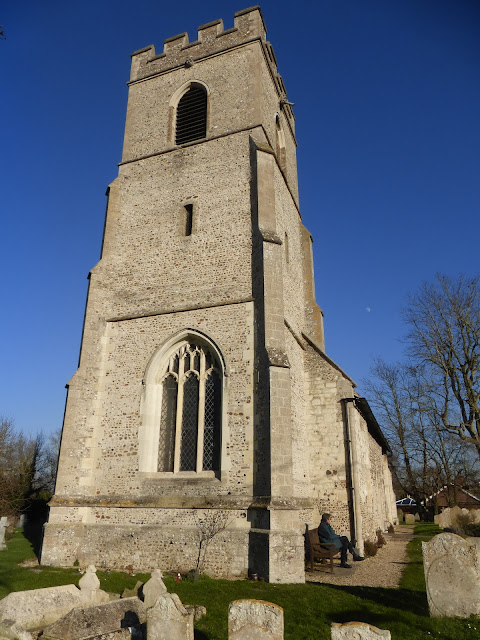 * Or are there any intact Roman doorways in Britain; the Pharos at Dover Castle, for example? And what about the entrance to West Kennet Long Barrow, built c.3600 BCE, and other similar prehistoric structures? My statement makes no sense, unless we assume I'm including only church doorways.

Posted by David Gouldstone at 19:43