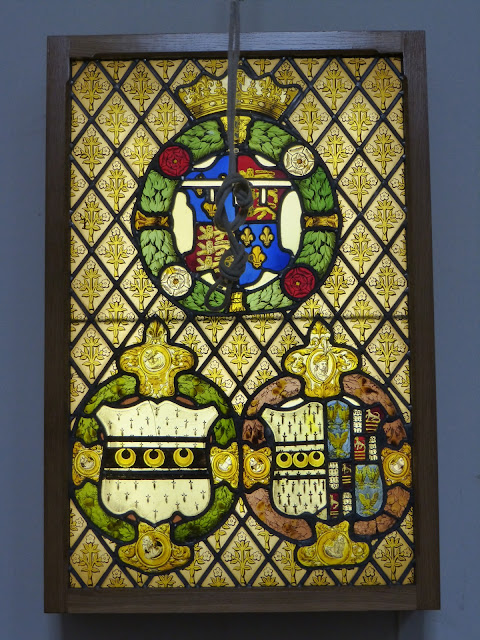 When writing about Ayot St Lawrence church (see here), I mentioned that, although there's no stained glass in any of the windows (which is standard for 18th century churches), there is some heraldic glass elsewhere. It's in a wooden display case on the north nave wall, and usually doesn't look at all interesting; it gets overlooked because you have to turn on the light which illuminates the glass in order to see what it is.

I can't find any mention of it at all in any book or website. Even the Victoria County History, which usually goes into genteel ecstasies over heraldry, seems unaware of it. (There's apparently a new church guide due in 2018, so maybe the glass will find a place in that.) I imagine that it was originally from the now derelict old church, or perhaps Ayot House, where the lords of the manor lived. * When it was moved to the new church I have no idea. It is nevertheless worth seeking out. (To find the switch, follow the electric cable down and off to the right near the floor.)

There are three coats of arms, which must all be 17th century, though the quarries (the diamond-shaped background glass) are Victorian (c.1880?). (Perhaps this enables us to date the move to the new church.)

On the day I was taking photographs, the rope that opens the windows was hanging in front of the upper coat of arms, and was impossible to reach, so apologies for the inadequate pictures. You must also bear in mind that I'm ignorant about heraldry, so forgive any howlers. (Corrections and amplifications will be gratefully received.) 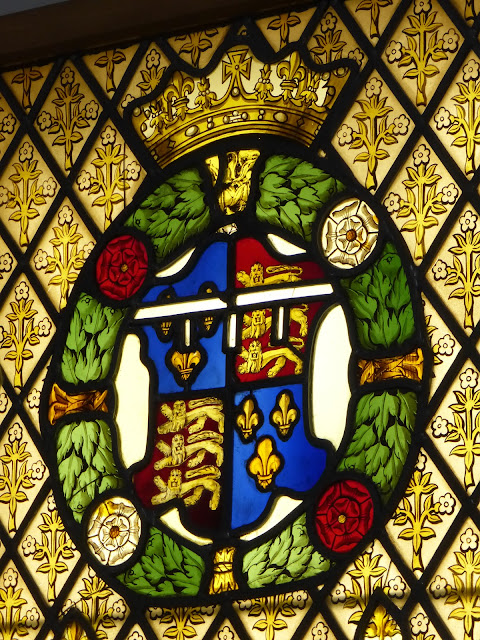 The first one is the arms of a Prince of Wales. The shield itself is of course that of England - even I can tell that - as was used from 1406-22, 1461-70, 1471-1554, and from 1558-1603. (I wish I could tell you that those dates tripped lightly from my mind to the keyboard, but I have to acknowledge, as so often, the assistance of Professor Wikipedia.) The horizontal white line and the three shorter lines hanging from it are what is known as a label, and indicate that the coat of arms is that of an eldest son.  The Prince of Wales in question must be Arthur Tudor (the elder brother of Henry VIII), Henry VIII himself before his father, Henry VII's, death, or Edward VI, before his father's death. My money's on Edward (who doesn't seem to have been officially crowned as Prince of Wales).

I don't know if he had any connection with Ayot; he had certainly spent much of his childhood in Hertford and Hatfield, Herts. But it was common for the nobility to express their allegiance to the ruling dynasty by displaying the royal arms. 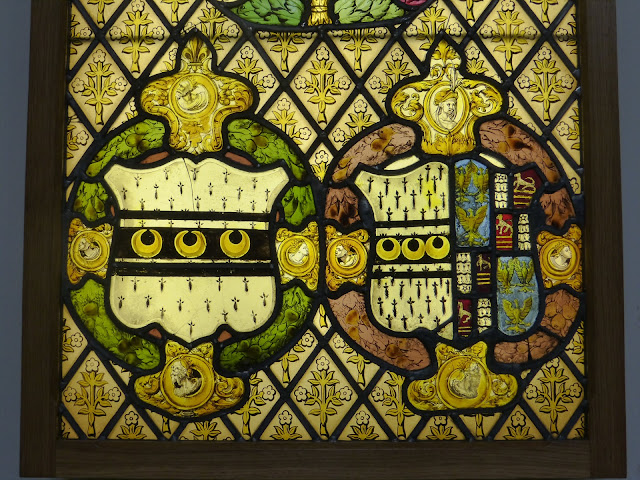 The second one, on the left in the above photo, is the arms of the Bristowe family. In the (to me) obscure but evocative language of heraldry, it's described as 'ermine a fesse corised sable with three sables or thercon.' The Bristowes lived in Ayot from 1543 to 1714. 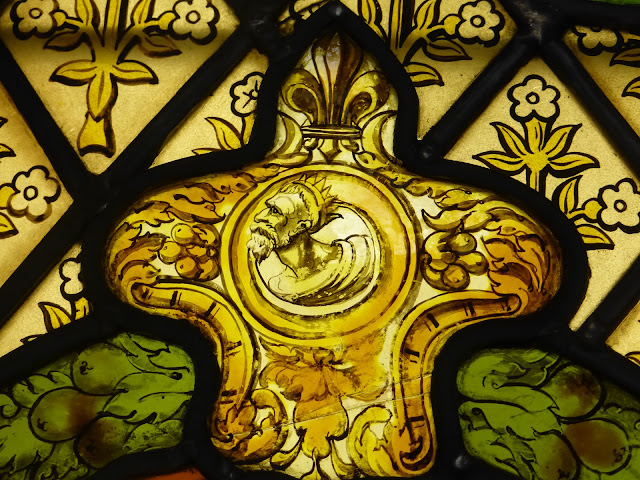 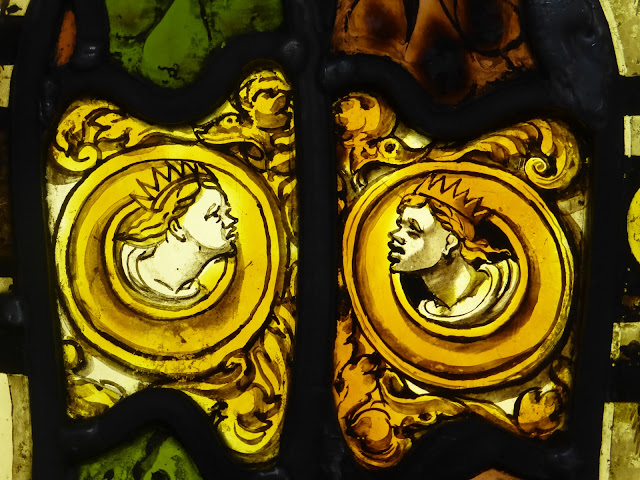 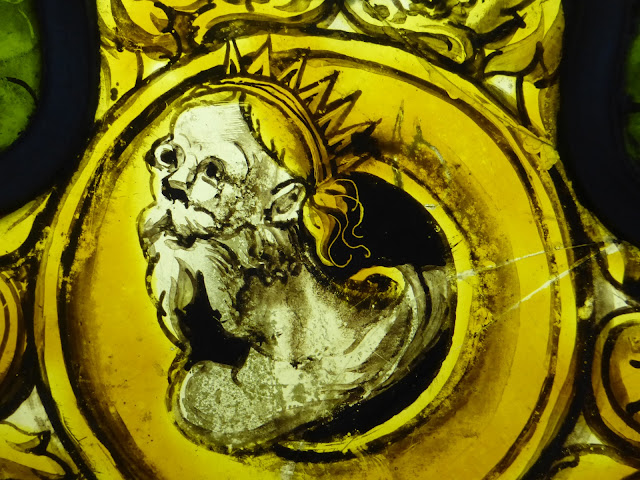 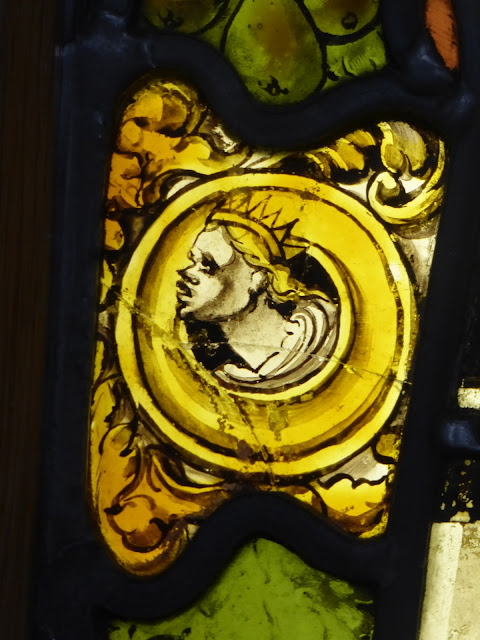 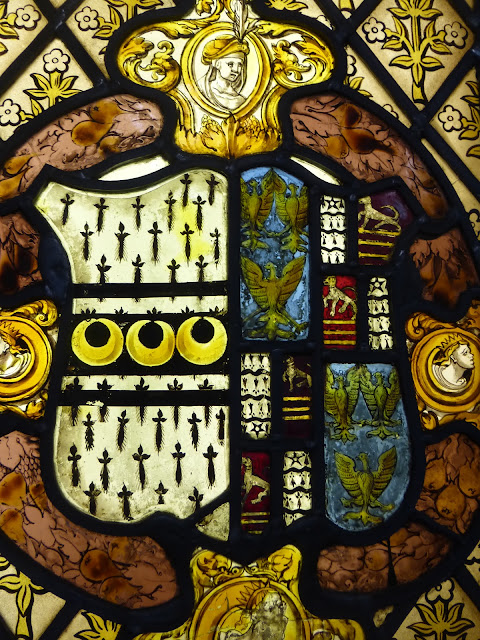 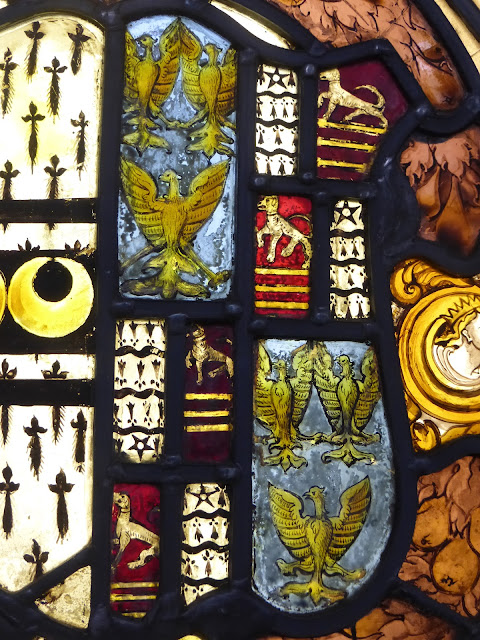 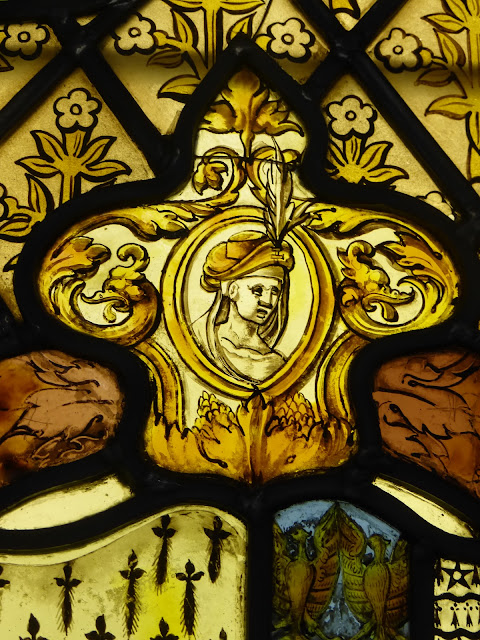 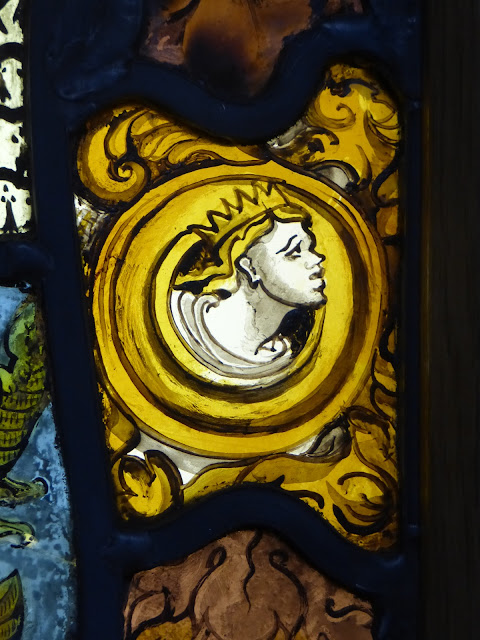 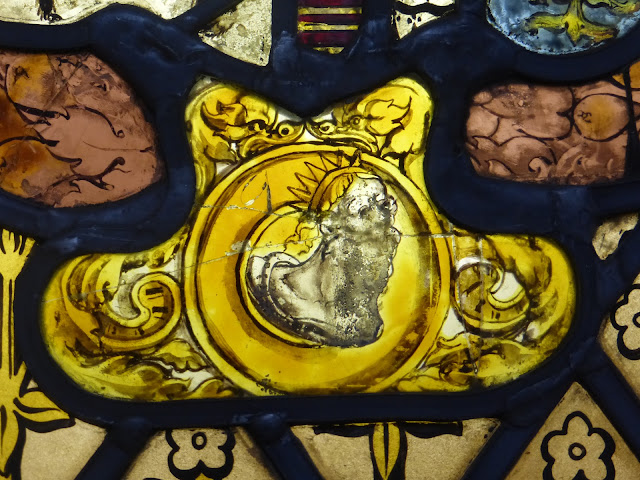 The last shield is my favourite, though I don't know whose it is, apart from that it's that of a male member of the Bristowe family who married someone with an elaborate coat of arms of their own. (The dexter side (right, when seen from the point of view of the bearer of the shield, that is, the left from the onlooker's) is reserved for the husband, while the wife is relegated to the sinister side.) Take a look at the profusion of images on her half - dogs, eagles, ermine, five-pointed stars, and three gold lines. It's all very impressive. I hope it helped her to put her comparatively heraldically challenged spouse in his place.

The Bristowe shields are surrounded by eight extremely characterful heads peering wistfully out of fictive round frames, as if they're peeping out of portholes on a galleon. There are three greybearded kings, four much more youthful queens, and a pilgrim with palm leaves in his hat. They give a touch of life to an otherwise rather routine subject.

* I've just found this in volume four of The Antiquarian Itinerary, Comprising Specimens of Architecture, Monastic, Castellated and Domestic; with other Vestiges of Antiquity in Great Britain (1816): the glass was originally in 'the east window of the north chancel'. It's described as 'some fine painted glass, with the arms of the Bristowes, formerly lords of the
manor; and above, the royal arms of England, within a bordure, charged with the cognizances of the houses of York and Lancaster: these arms are now preserved in the window of a house near the church.' It's annoying when the answer to a question turns out to have been hiding away in a book I had on my shelf the whole time.
Posted by David Gouldstone at 18:48