Flemish stained glass amid the furniture in Hitchin, Herts 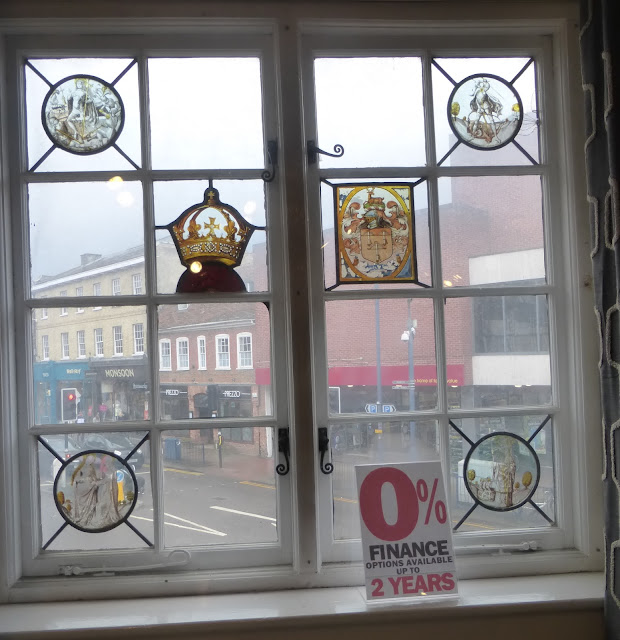 Some months ago I happened to go into a furniture shop in Hitchin, Herts. I was looking at tables and sofas and so on, probably without much enthusiasm, when suddenly my eye was caught by this window. It seemed from a distance to contain some late medieval stained glass, which hardly seemed possible in a run-of-the-mill shop probably built in the 1920s. However, a closer look showed that I was right. For a moment I was deluded and arrogant enough to think that I might have 'discovered' them (that is, that I was the first person who knew what they were to have noticed them). Back home it took about thirty seconds on the Corpus Vitrearum Medii Aeva website to realise that far from being ahead of the field I was trailing a long way behind; the glass has indeed been noticed and documented before. Nevertheless, it feels like a discovery of sorts - I'd lived in Hitchin for twenty years without knowing of its existence, and how many inhabitants of Hitchin realise it's there? (and how many would care?) - and this afternoon, passing by with my camera in my pocket, I took the opportunity to photograph them. 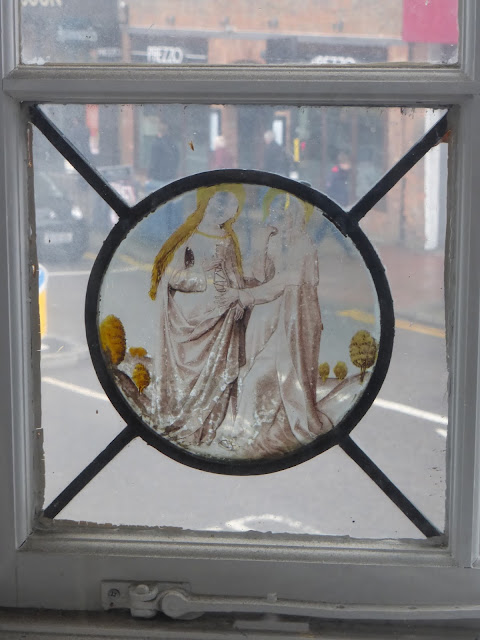 Getting decent photos isn't at all easy, as the bottom two roundels have as their natural background an intrusive street scene clearly visible. You have to crouch down onto the floor, in a very restricted space, to find an angle that has the sky behind (which distorts the perspective). Also the shop lights create distracting reflections. All this while the shop workers plainly think you're bonkers. Nevertheless, I think my photos of the last two roundels are better than those obtained by the CVMA.

There are four roundels, a coat of arms and a crown. The roundels date from the 1520s, and are probably Flemish or Netherlandish. The heraldry and crown are probably of similar date. The roundels are quite elaborately painted in monochrome on a single piece of glass, and heightened here and there with yellow, made by applying silver nitrate (or another  silver compound) to the glass. (See here for examples of 13th and 14th century glass, very different in style and technique, and much more expensive.) 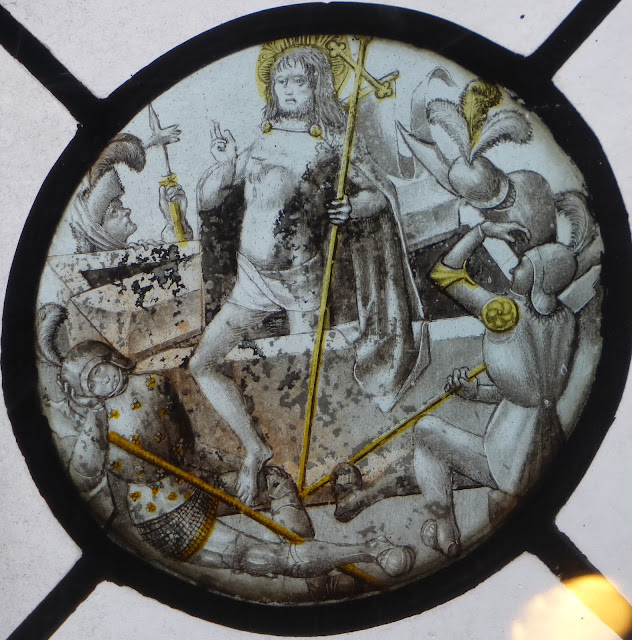 Top left is a Resurrection. Two soldiers sleep on while Christ arises from the dead, witnessed by two other soldiers (the one on the left doesn't seem very impressed). The soldiers, with their swanky feathered helmets (the one on the top right has three feathers, including a yellow one, while all the others have to make do with just one relatively drab specimen), frame the composition. The left leg of the bottom left soldier is weirdly bent to fit. Christ is handsome and heroic, though the lid of the tomb was much too small to cover the aperture, so pushing it aside can't have been all that difficult. 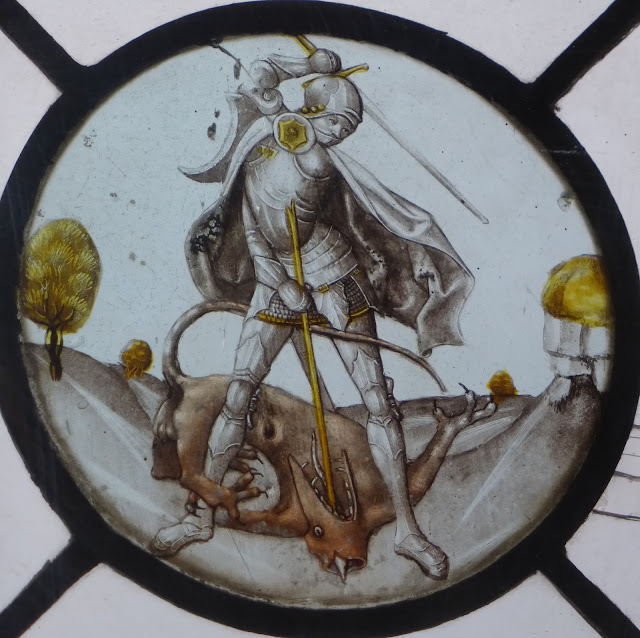 Top right, the archangel Michael skewers Satan in the form of a dragon. It's been decapitated, and its claws are extended in its death agonies. Its whippet-like tail extends between the archangel's legs, and its testicles are clearly depicted. The background suggests a rocky landscape with three trees, and a cliff on the right. I'm not sure how the brown of the dragon was created; maybe an alteration to the recipe of iron or copper filings that were applied to the glass to create the monochrome lines and washes did the job. Similarly, the green of the trees was probably made by changing the silver compound that usually produced yellow (or orange). 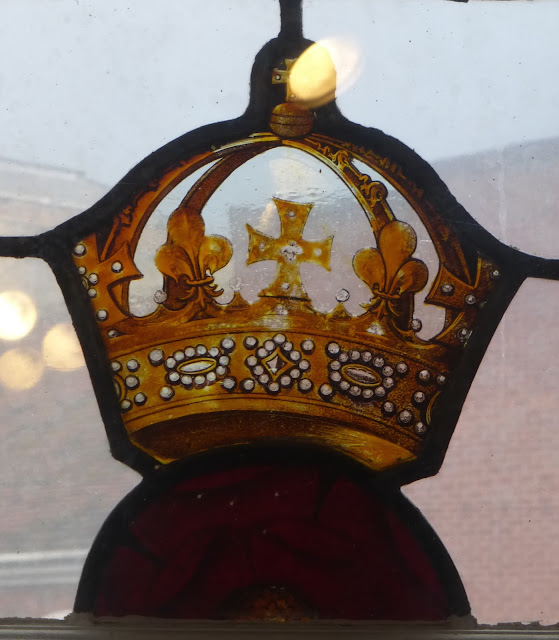 On the left in the middle tier is a crown, on half of what I think is a rose. This may refer to the Virgin Mary as the Queen of Heaven, but without more context it's impossible to be sure. 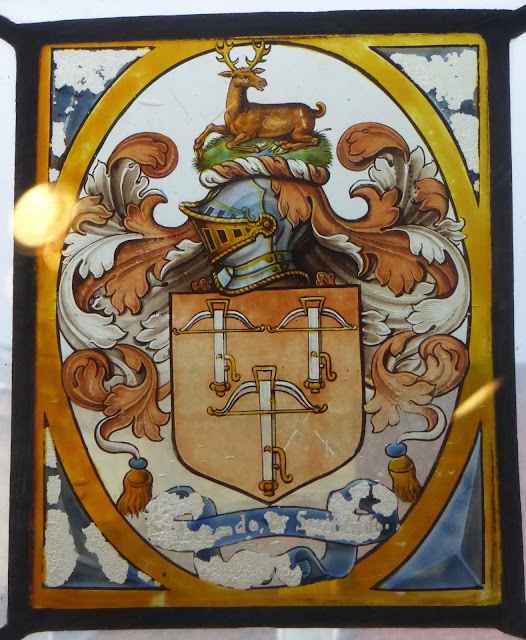 On the right is a coat of arms, with a shield displaying three crossbows. There's a motto, but I can't read it. Very likely someone knows whose coat of arms this is (or was), but unfortunately I don't. The acanthus leaves are painted vigorously, and end, strangely, in tassels. The colours were made by applying enamels to the glass. 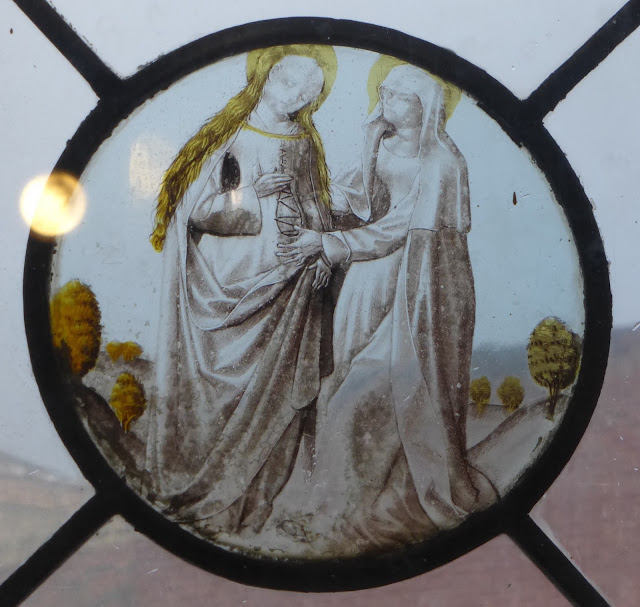 On the bottom left is a scene known as the Visitation. Mary, pregnant with Jesus, visits her cousin Elizabeth, pregnant with John the Baptist. Elizabeth puts her hand solicitously on Mary's swelling belly; the latter casts her eyes down modestly. The event takes place in a pleasantly wooded landscape. 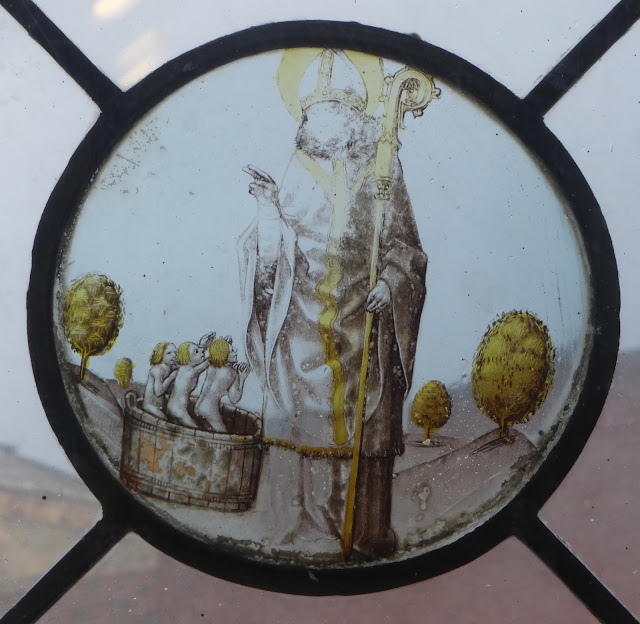 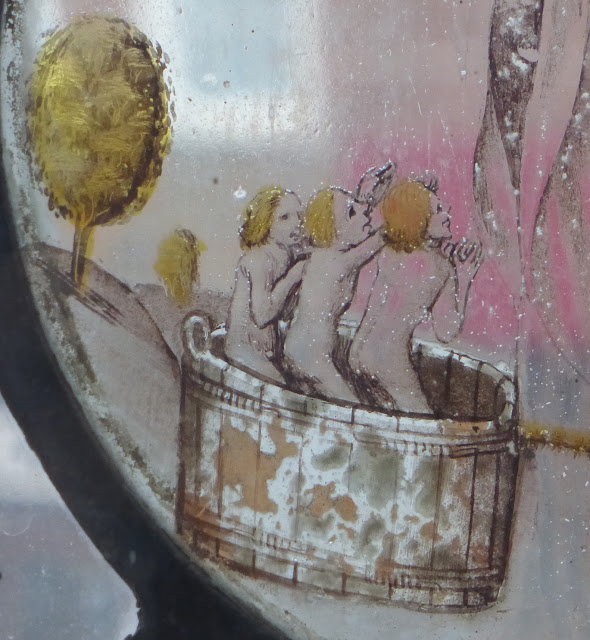 The final roundel shows St Nicholas bringing three murdered boys back to life. The story goes that, during a famine, a villainous butcher lured three boys into his house, murdered them, and stored their bodies in a barrel to cure, intending, Sweeney Todd-like, to sell them as ham. Nicholas, whose face isn't well-preserved, resurrected them by his prayers; another symbol of the triumph of good over evil and life over death.

What are these stained glass scenes doing in a furniture shop in Hitchin? We can guess that  when it was built, c.1920, the proprietor wanted to add a bit of class to his premises and picked up the glass, probably for a song, and it's been there ever since, largely unnoticed and unremarked. 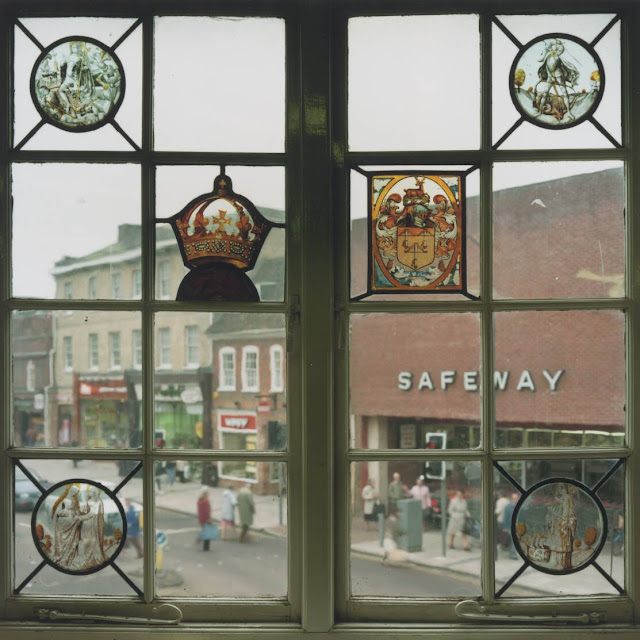 The image above is from the CVMA website. It seems to have been taken in 1987, and brings back nostalgic memories for me. I moved to Hitchin in 1985, and did most of my shopping, on my bike, in the Safeway supermarket visible through the window. I could have been in the shop or street when the photo was taken. Incidentally, the building (now a Wilkinson's) is a dismaying example of 1960s or 70s planning. It's in Bancroft, but forms the termination of the view down Hermitage Road, which has the greenery of Windmill Hill at the east end, and once had an unexceptional but dignified Georgian building at its west. (I can't find a photo on the web.) But somehow, despite its sensitive position, it was allowed to be demolished, and somehow, despite the aggressive, ill-proportioned brick facade of the new building, it was allowed to be replaced. Let's be thankful that at least these random bits of stained glass have remained untouched over the years.

Posted by David Gouldstone at 10:10