Hertfordshire, and specifically Hertfordshire churches, has always been the main focus of this blog.* This is because I believe Herts to be an often under-appreciated county, and because I've lived there a long time. Watford was the town that had the dubious pleasure of witnessing my birth, and I lived there for the first four years of my life. When I was looking for my first proper job as a newly qualified teacher, I think I'd really have preferred what I regarded as a more glamorous county (Sussex or Oxfordshire might have fitted the bill), but I ended up in Welwyn, and stayed for three years. It was there that I first started to realise that Herts has much to recommend it. I then moved to Hitchin, which was so agreeable that I lived there for twenty-one years. Twelve years in Letchworth takes the story up to February 2018. Which means that of my sixty years so far, exactly two thirds of them have been in Hertfordshire.

So it seems almost a betrayal to have moved out of the county. I've been creeping northwards (Watford - Welwyn - Hitchin - Letchworth), and I've accelerated the trend by making a twenty-five mile giant step north into Cambridgeshire; Cambridge itself, in fact. Cambridge can hardly be called under-appreciated; it must feature on most tourist itineraries, which means that it's often hard to negotiate its crowded streets and pavements (as well as hazardous, thanks to the lecture-intent two-wheeled students careering everywhere). I'm still a tourist myself, and will be until such time as I start taking views like this for granted: 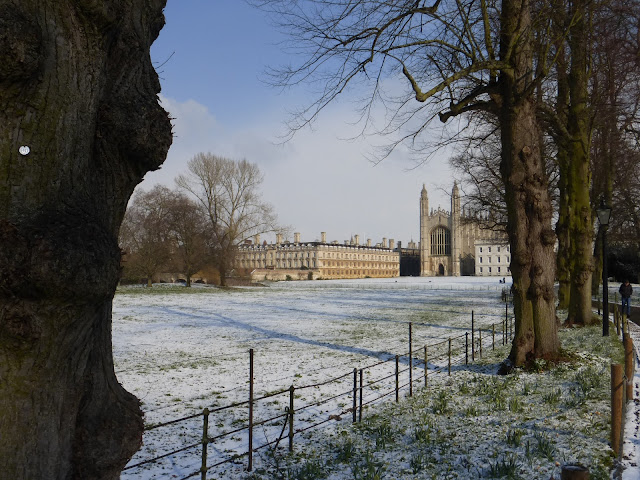 I've moved between the only two (so far as I and Dr Google are aware) places in the world to have a David's Bookshop. (David's Bookshop, Letchworth; David's Bookshop, Cambridge.) (The two are commercially unrelated; the first is named after someone with the forename David, the second after a surname. I recommend them both.) As a fellow David, this pleases me.

What pleases me less is that the move, from one excellent place in which to buy books to another, has enforced a book cull. Quantities of books that can be accommodated in a largeish house can't be easily crammed into a middling flat. Already large numbers have been sent off to seek their fortunes in Oxfam, and, I fear, more will have to be given their marching orders. Some hard decisions are ahead.

For example, can I really justify keeping all my Wisden Cricketers' Almanacs? I have most of them back to the Second World War, and they take up a lot of shelf space. In truth, I don't read them very often. Yet I find their presence comforting; they represent the past. They are nostalgia made tangible.

English has a huge vocabulary, but it's always seemed to me that the concept of nostalgia is inadequately served by having only one word to denote it. At least three are required. Firstly, there's the longing for your own childhood and youth. Secondly, an attraction to the years and decades just before your birth - your parents' younger years. Lastly, a feeling that the more distant past must have been a Golden Age, and everything has gone downhill since then. The first two of these are embodied in my Wisdens (and if I could afford the older ones, as they go back to 1864, the third would be too). But is this sentimentalism a good enough reason for continuing to clutter my shelves? Will the days of the Festival of Britain and Tubby Hayes' early recordings drift off into dark obscurity if I sell off the 1950s volumes? Will a chunk of my childhood really be thrown away if I get rid of those from the 60s? Will my school and undergraduate days fade further in my memory if I ditch the 70s books? Cold reason says no; my foolish heart says yes.

Most things in life are a compromise, and compromise is what I shall probably resort to here. I shall have to abandon my compulsive completeism and weed out all the volumes in which England or Essex didn't do well. (Herts, of course, has never had First Class status.) Certain years, in which they not only didn't do well but suffered humiliation, can be satisfyingly hurled as far away as possible, though occasionally this will lead to a dilemma. Take the forthcoming 2018 volume, for example, which will detail Essex's astonishing 2017 season (winners of the Championship by 72 points, having won twice as many games as their nearest rivals!) as well as England's . . . let's just say somewhat less successful tour of Australia in 2017-18. Maybe I can glue together the pages detailing the latter, and pretend they don't exist.

I've drifted a long way from the supposed theme of this post. But I intend to keep indagating around Herts churches on this blog (along with other subjects, among which Cambs churches will no doubt feature). The nearest point of Herts is after all only about 20 minutes drive away, and the Icknield Way does just about (though only just about) go through Cambs, so I can still justify the blog's (embarrassingly pretentious) title.

* However, I've just counted and found, to my surprise, that fewer than a third of the 76 posts so far are directly Herts related.
Posted by David Gouldstone at 14:31