A farrago of faces and figures in Finchingfield church, Essex 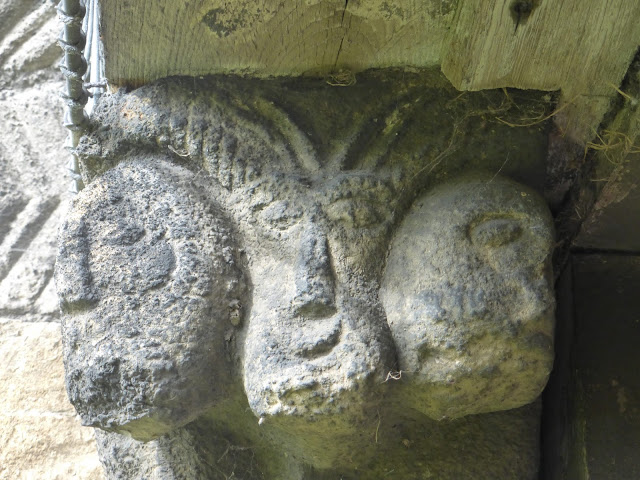 Finchingfield, Essex, is an extravagantly, even absurdly pretty village. Alas, its picturesqueness is its downfall, as it attracts visitors from far afield and is consequently crammed with a clutter of cars parked bumper to bumper (a desecration to which I hypocritically contributed). I'd been to the church several times before, and found it enjoyable enough without being really excited by it. On today's visit, however, I spotted numerous little details that I'd previously overlooked, and I think they're worth sharing.

I'm increasingly finding that such minutiae - corbels, label stops, graffiti, miscellaneous carvings - are what attract and intrigue me. Finchingfield has an imposing 14th century Decorated north arcade, but I barely looked at it; for one thing, it's not unlike a dozen, a hundred similar arcades, and for another it's 'official' and 'approved'. The masons who made it were essentially following orders and doing a job, albeit a job worth doing, and doing it well. On the other hand, the many incidental figures, usually hidden away in plain sight, are (presumably, though we can't be certain) unofficial expressions of their individual makers' thoughts and feelings, folk art that gives us, perhaps, the closest thing we have to a window into the minds of 'ordinary' medieval people. 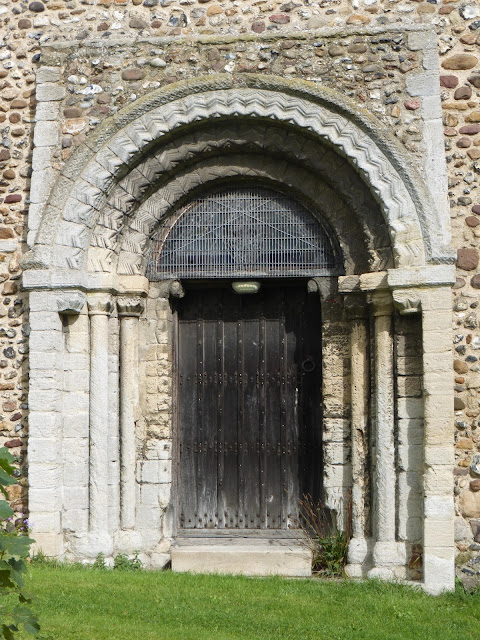 On approaching the church, this commanding 12th century Norman west doorway is the first thing you see. If you look closely, you notice that there are carvings of heads on either side of the top of the door. Those on the north (left) can be seen at the top of the page, a figure with a human face, a lopsided grin and the ears and horns of a goat. Was this intended to be symbolic of the part divine, part animal nature of mankind, or was it just a humorous whim of the sculptor? We can only guess. He is flanked by two badly weathered heads. 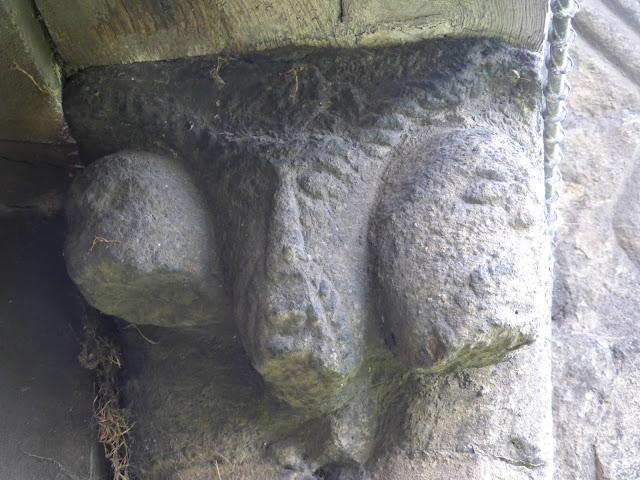 Those on the south (right) are even more badly decayed, but the central head seems to have a droopy moustache, and has horns but lacks ears. 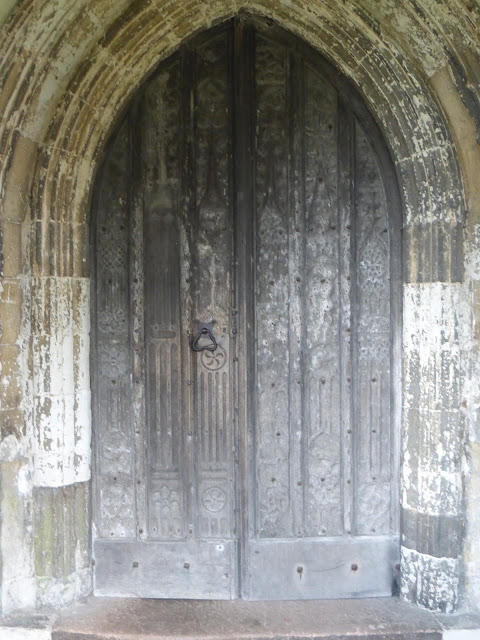 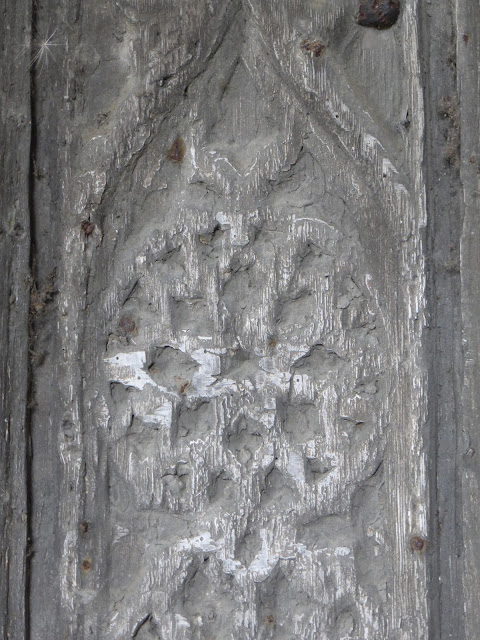 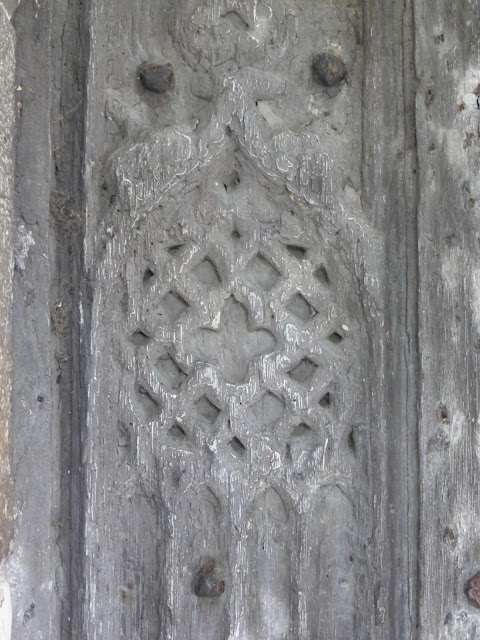 Entry is via the south door, which is original (c.1370) and lavishly decorated (and, unfortunately, very much showing its age). The main motifs are based on elaborate window tracery.

The following photos show a selection of corbels and label stops, all from the 14th and 15th centuries: 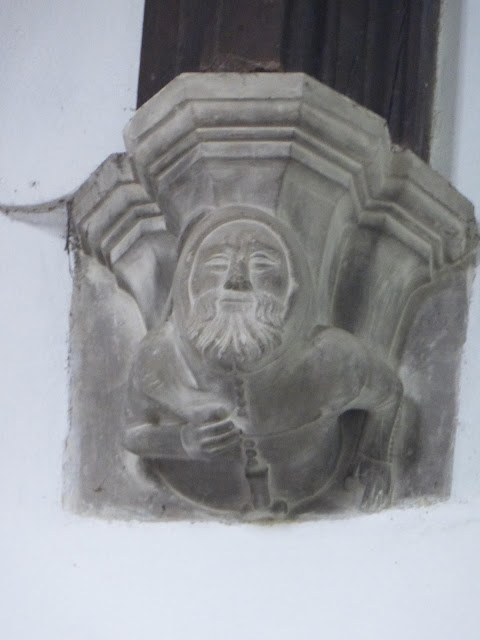 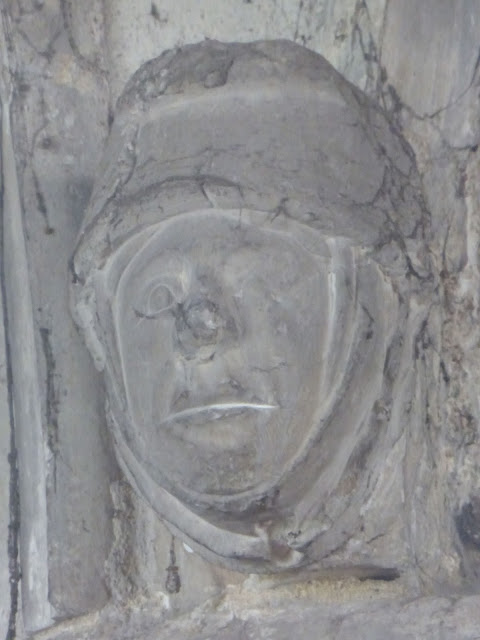 A wide-eyed, very troubled figure, wearing a helmet-like hat. It looks as if he's just been struck by the utter emptiness and meaninglessness of life. 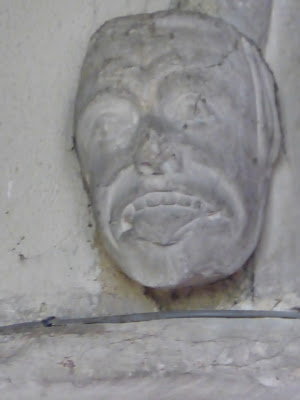 A lively carving of a defiant tongue-sticker-outer. 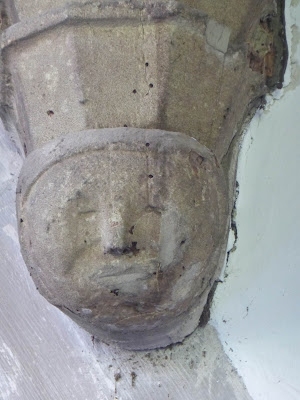 A moon-faced figure, perhaps unfinished; he or she seems to have their eyes shut. 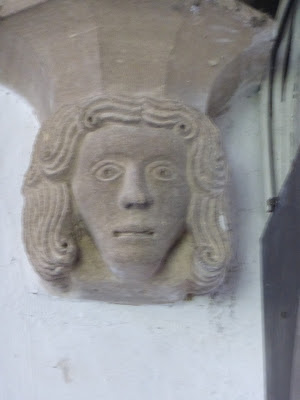 A rather aristocratic figure with fashionably flowing locks; he (or she?) also looks as if he's made a dreadful discovery. 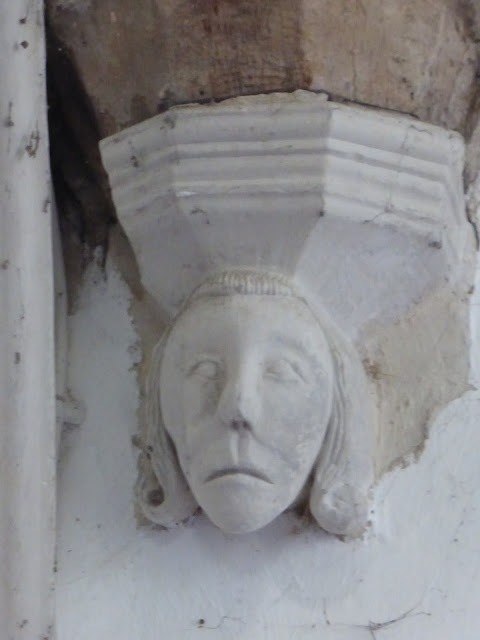 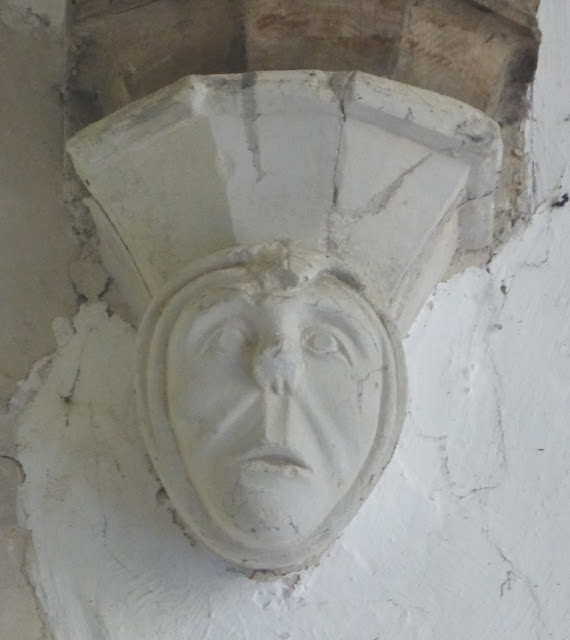 Something has startled this chap. 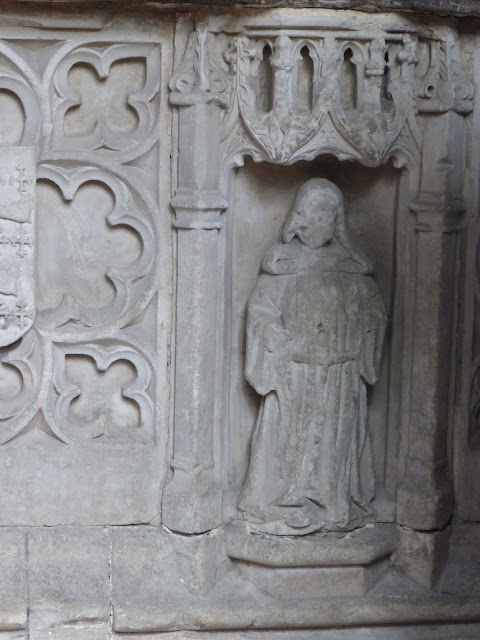 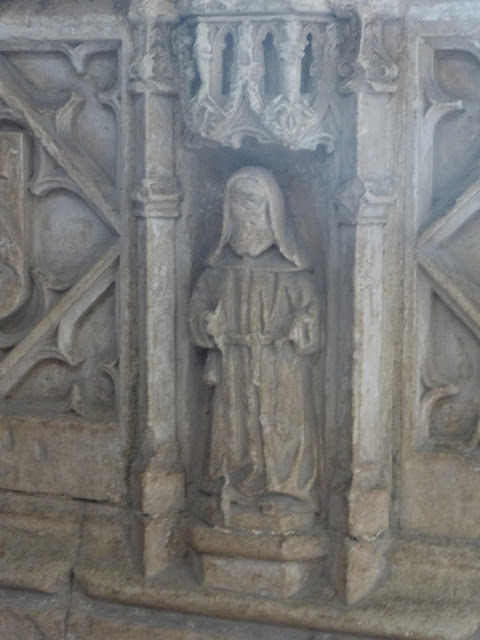 Two bedesmen (or beadsmen) from the tomb of John and Elizabeth Berners; she died in 1523, while his date of death is given simply as 15__ (i.e. the last two digits were never filled in). Bedesmen were employed to pray for the souls of their benefactors, and these figures carry rosaries. Presumably their faces have been deliberately targeted by iconoclasts. 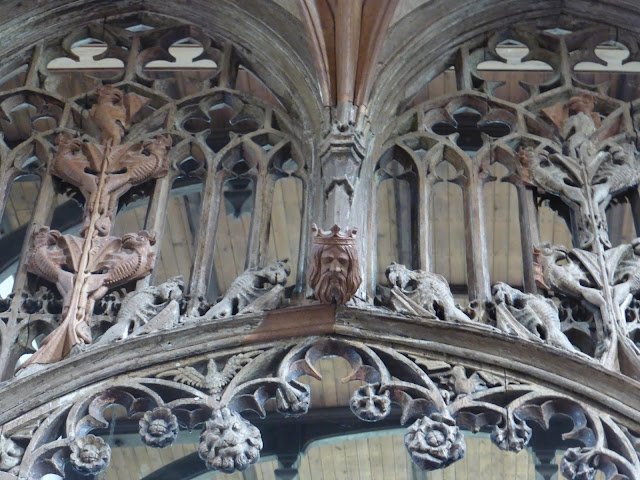 The early 15th century chancel screen is, according to Pevsner, one of the most elaborate in the county, and includes amongst the frothy carving this head of a king (or, more likely, Christ the King). 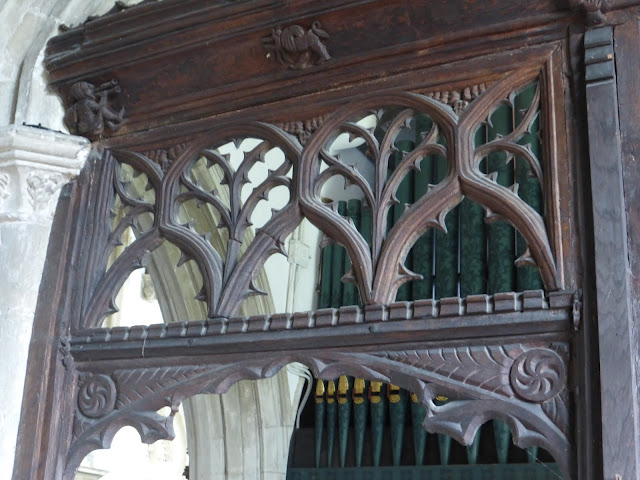 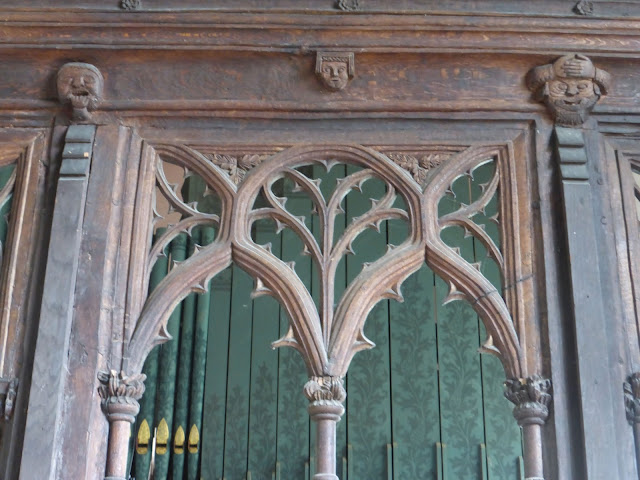 I think my favourite object in the church is the screen in the south aisle, which dates from the mid 14th century. The tracery at the top of each division is a delight of curving shapes flowing one into another. But I particularly love the seven little carvings on the bressummer beam that runs across the top. They are, from left to right: 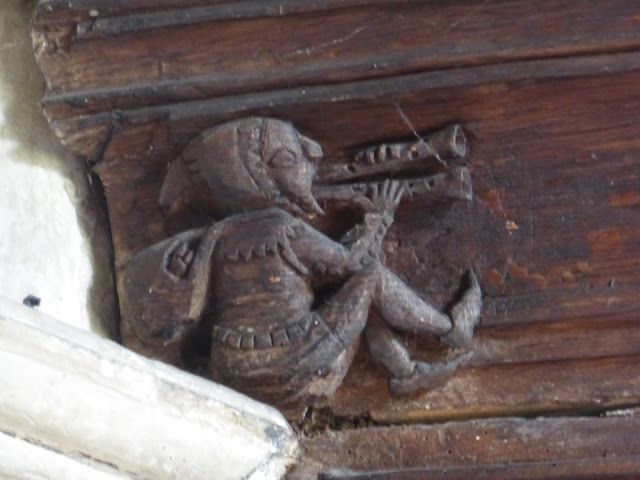 A medieval musician goes all Rahsaan Roland Kirk. He has snazzy pointed shoes and a bag slung over his shoulder; something is poking out of the bag, but it's impossible to tell what. He is sitting down and playing a double pipe, opening his mouth cavernously to accommodate it (them?). Double pipes are characteristic of the music of early cultures; they can be reed instruments (like clarinets) or reedless (like recorders). Sometimes one of the pipes provides a drone while the other plays a tune, but in this carving each pipe clearly has several finger holes, enabling the musician to play a duet with himself. There are plenty of examples of double pipes being played on Youtube; see here, for example. 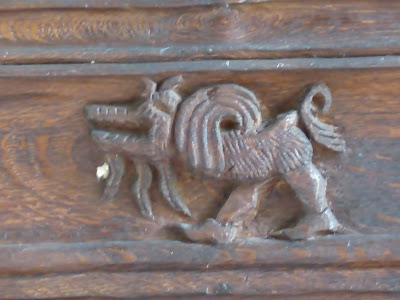 This looks like a fantastic beast with human feet (and shoes like those of the double pipe player). I think that it depicts a man dressed as a dragon for a procession or festival. There's a rare survival of such a costume in Norwich Castle Museum (read a blog about it here). Probably the central purpose of the costume was to re-enact St George's battle with the dragon, but no doubt the actor had plenty of fun mock-terrifying the crowds. 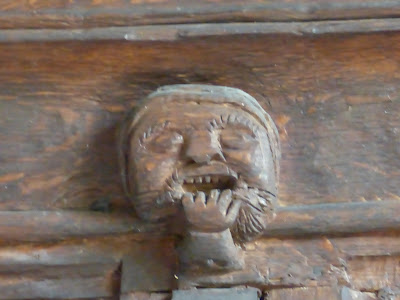 A bearded mouth-puller, i.e. someone using his hand to make an amusingly ugly face. It has to be said that his effort is tame compared to that of many of his fellow gurners found in medieval churches. 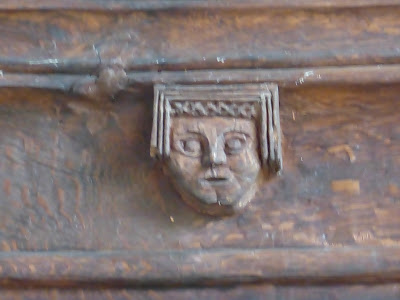 A small figure of a lady with a square headdress, very characteristic of its period. She looks as if she's inadvertently got her head stuck in a box. 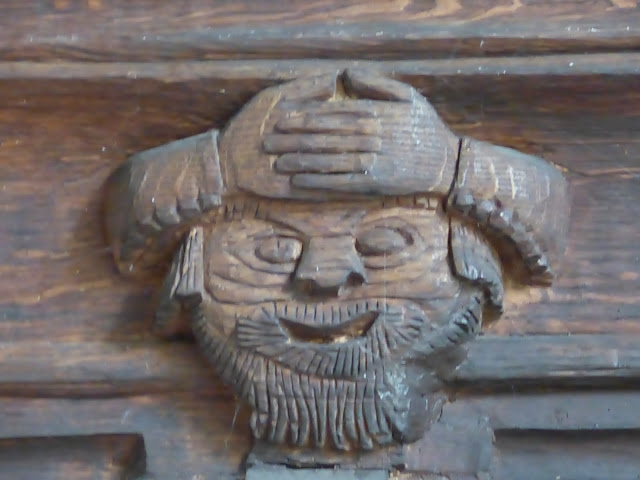 This chap has just seen something comically absurd, and he claps his hands to his forehead in disbelief. I wonder what aspect of human behaviour has struck him so forcefully as he looks down the aisle and watches with such incredulity the churchgoers and visitors come through the main entrance. He's been laughing at them for the best part of seven centuries. This figure, though only a few inches across, is full of character. 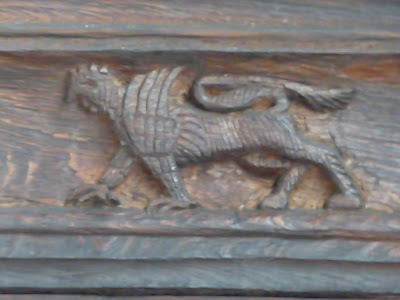 Another fantastic beast, though this one clearly isn't a man in a funny costume. It's a griffin, with the body of a lion and the head, legs and wings of an eagle. However, its head looks more like that of a chicken, which isn't quite so imperial. 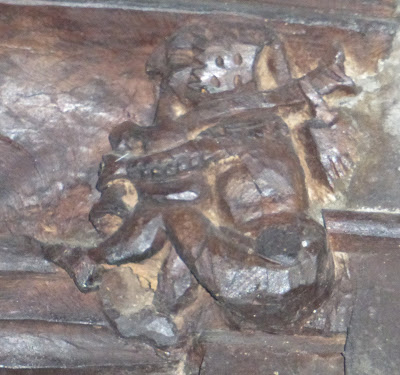 Another musician, seated facing his colleague, playing the bagpipes. Bagpipes are, in the minds of many 21st century people, associated almost exclusively with Scots, but this is of course wrong; numerous cultures have their own tradition of the instrument, including the English. Wouldn't it be fun to be able to hear the music the double pipes and bagpipes are making together.

Finchingfield church has always been open whenever I've visited. If you visit, try to be less invasive than me and go on foot or by bus or bike. 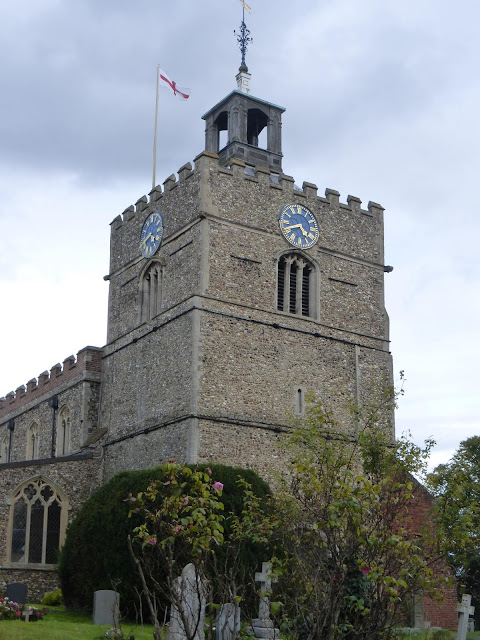 Posted by David Gouldstone at 09:54