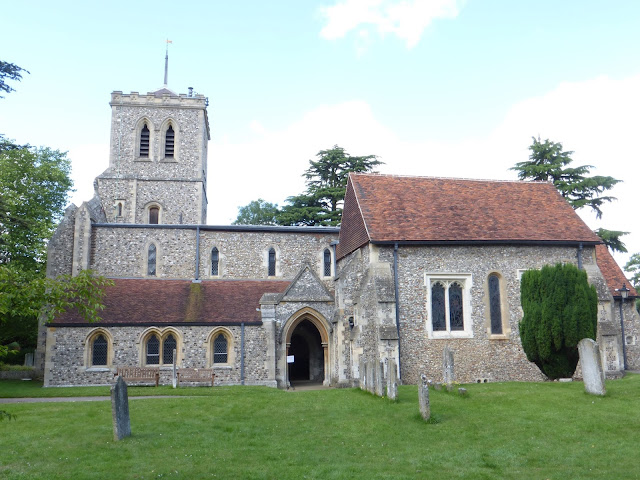 St Michael's church is a winding walk from St Albans cathedral down Fishpool Street, with its many medieval and later houses and low bridge across the River Ver. The church is within the walls (only a few fragments of which remain, however) of the Roman city of Verulamium; to be exact, it stands on or just to the north of the site of the basilica (rather like a town hall-cum-stock exchange). A short distance to the west is the Roman theatre (enough survives to enable the visitor to vividly picture the crowds and the entertainments they presumably wanted to see so much that they were willing to endure the unholy trinity of outdoor seating, English weather and togas). And just across the road is the excellent Verulamium Museum, home of outstanding mosaics and the gorgeous Verulamium Venus.

The church could almost have been designed as a textbook demonstration of the the five main period of medieval English ecclesiastical architecture: Saxon, Norman (or Romanesque), Early English, Decorated and Perpendicular.* I can't think of any other place in Herts where this is true (even the cathedral, though it was founded in Saxon times, has no visible evidence of work from that time), and there can't be many in the rest of the country. Add to this the proximity of the Roman remains, and, less exotically, the Victorian portions of the building, and St Michael's could justly claim to be one of the most historic buildings in the country.

The Saxon work is best seen inside the church. The walls of the original nave, dating from about 1000 (roughly the same date as the nave of Reed church), largely survive, and now form the north and south arcades. The best Saxon details are the remains of windows above the arcades, the jambs  and arches made from Roman bricks salvaged from the ruins of the Roman town. There are three on the north; of the two visible in this photo, one is no more than a flourish on the white plaster, while the other is still recognisably a window though it's been cut off vertically. (In the chancel there's also a door of similar appearance in the north wall.)

Above the south arcade there's a similar Saxon window, cut off horizontally, and now communicating with the south chapel.

The Norman contribution was to add aisles. They did this by simply cutting semi-circular arches through the Saxon walls. Pevsner dates these to the early 12th century, while the Victoria County History and the Royal Commission on Historical Monuments plump for late 12th century. Given how simple, even crude, the arches are, I'm inclined to agree with Pevsner. Curiously, whenever they were cut, no attempt was made to make the two arcades align with each other; the piers and arches on the north don't correspond to those on the south, so there's a disorientating sense of things being out of kilter in the nave. (The round-headed east window of the north aisle is also Norman.)

Early in the 13th century the nave was heightened and clerestory windows in the latest Early English style added. In this period pointed arches were used for the first time, and windows were usually tall, thin and sharply-pointed, and are known as 'lancets'. Some of the clerestory windows have been replaced by later ones, but on the south there are still four lancets, and three on the north. 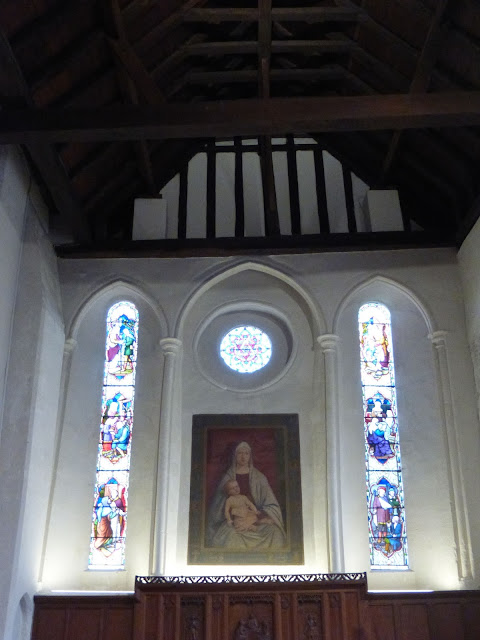 Probably just a few years later, and still in the Early English style, the south chapel was added (probably as a Lady Chapel, that is, one dedicated to the Virgin Mary). The east wall has a triplet of windows, framed by elegant shafts. The central window is circular***; it's possible that this is a later, perhaps post-Reformation, replacement for the original lancet, though if this is true why it was thought necessary I can't guess, and there are no hints of rebuilding in the external masonry. Oddly, although the canopies of the outer windows are pointed, the windows themselves are round-headed. Again, this is very hard to explain; I don't remember seeing a similar feature elsewhere. Perhaps the designer, or builder, wanted to make the exterior of the building blend with the existing Saxon/Norman structure. Medieval builders don't normally seem to have had such qualms, however; generally they apparently relished imposing the latest styles on old buildings. 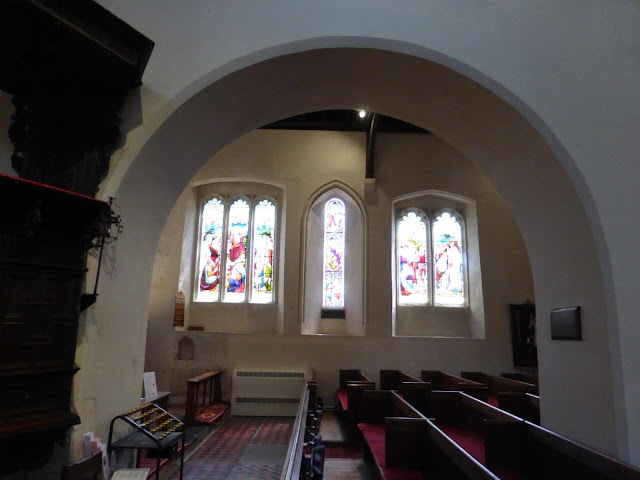 The south wall of the chapel has a single central lancet (though again round-headed), which is flanked by later windows, to which we'll return. 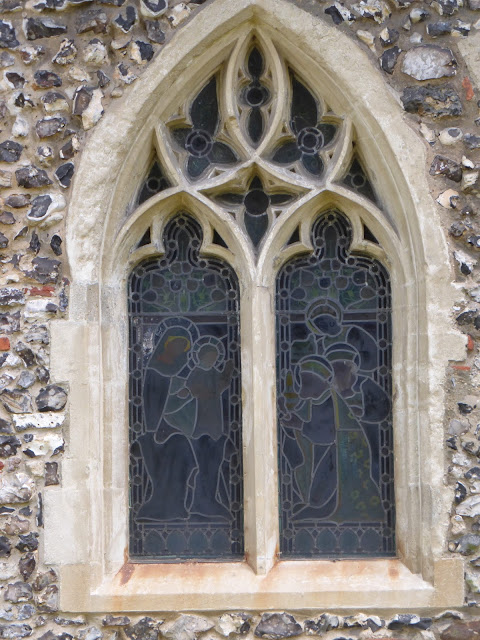 Late in the 13th century the Decorated style arrived, which, as its name suggests, is much more elaborate than Early English; in particular, decorative stone tracery appeared in the top of windows (which weren't so sharply pointed as before). Decorated architects were especially fond of the ogee, (pronounced, more or less, like 'Oh gee! I've just invented a new style of architecture!'), that is, an S-shaped curve. The window above is in the north aisle; the stonework looks new but it probably reproduces the original of about 1340. As you can see, it's very graceful though essentially composed of the simplest elements, merely four ogees, two smaller (springing from the central mullion) and two larger (springing from the jambs). 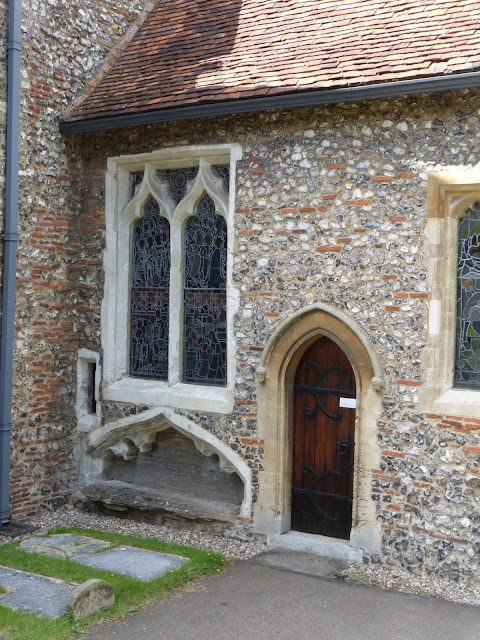 The south side of the chancel has an external tomb recess; the ogee curve here isn't as marked as in the windows above it, or that in the north aisle, but the little upward flick at its apex is enough to qualify it as such, and for us to assign it to the Decorated period. (The tiny window to the left of the recess is a squint, to enable those outside the church to witness the services, though how much could be seen through it is doubtful. Alternatively, the VCH suggests that it allowed an anchorite (a religious hermit who'd vowed to spend their life sealed in a room attached to a church) to have some communication with the outside world - for example, to have food and drink passed to them - while living in their now long-gone cell.)

The Decorated style (or 'Dec' as amateurs of churches familiarly call it in a hopelessly doomed attempt to seem casual and cool) is the peak of English medieval architecture. Witness, for example, the east end of Lincoln cathedral, or Ely's crossing and choir. Sadly, it didn't last. It's tempting to think, though impossible to prove, that the Black Death of 1348 put an end to such frivolity (as those searching for an explanation for the terrible plague might have seen it), and a new, less exuberant and inventive and more strait-laced style****, Perpendicular, emerged, to suit the more sombre times. As its name suggests, it emphasises straight vertical lines. Arches are even flatter and less pointed than in Dec, and window tracery becomes repetitive and grid-like. Perp lasted for almost two centuries, nearly four times as long as the far superior Dec.

Partly because it lasted so long, and partly because it coincided with England becoming relatively wealthy and therefore there being plenty of rich donors around willing to sponsor church building projects, a majority of medieval churches have some Perp features, often ones that dominate or replace earlier ones. This is certainly true of Herts churches. St Michael's, however, has got away fairly lightly. 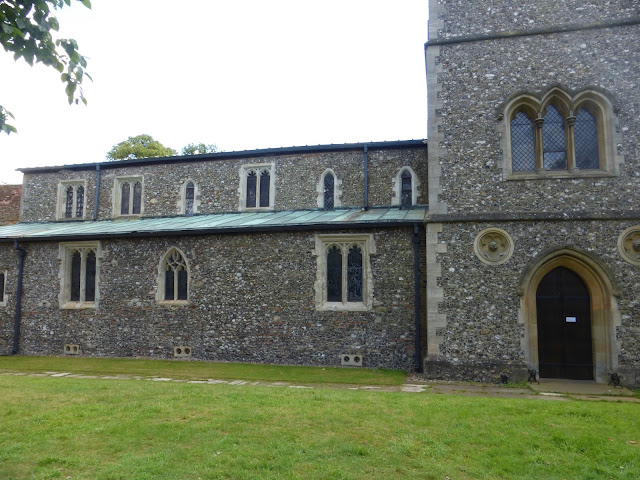 The picture above shows the north side of the nave and the tower (on the right - ignore that for a moment). There are three EE lancets in the clerestory, and the previously discussed Dec window in the nave; all the other windows are flat-topped Perp designs, with a central mullion running right up to the arch. The windows in the south wall of the south chapel, flanking the lancet, are a similar design (indeed, minor variations on this theme were rung for the best part of two hundred years, while Perp dominated). But on the whole we can be glad that between the 1350s and 1530s only minor work was carried out, leaving the bulk of the building to rejoice in its textbook status.

Alas, what many builders spent almost two hundred years mostly failing to do, one builder did in a year or so. Edmund Beckett, 1st Baron Grimthorpe (1816-1905), should be honourably remembered as the designer of the clock in the Houses of Parliament that rings Big Ben. Instead, he's generally reviled as a vandalising wrecker of St Albans cathedral (from the 1880s on). He seems to have had no architectural training; his only qualifications for the job of taking over from Sir George Gilbert Scott as restorer of the cathedral were that he wanted to, and could afford to (he paid for the work).

I'd like to be able to give a revisionist assessment of Lord Grimthorpe, pointing out, for example, that his rebuilt transepts in the cathedral aren't bad. But he demolished the west front and rebuilt it in his own clumsy style, and he did the same at St Michael's (in 1898). Were the west fronts so rickety that demolition and rebuild from scratch was the only option? I don't know, but I doubt it. The result at St Michael's is an awkward assemblage of mostly EE inspired motifs (the pentagonal window seems to be his own invention). The most cack-handed feature is the buttress between nave and tower, which ruins whatever harmony the composition might have had, and notice the way the buttress's three unequal stages don't correspond with the tower's stages.

In part two of this post I shall write about the church's contents, in particular the Doom painting, another sort of medieval textbook, one designed to teach the congregation to toe the Church's line.

* These terms were first coined in 1817 by Thomas Rickman in his Attempt to Discriminate the Styles of English Architecture, and, although they're not completely satisfactory, and despite some competing terms**, they've stuck.  It took a century or so for them to become generally accepted, however; in the 19th century the prosaic 'First', 'Second' and 'Third Pointed' were more commonly used. Two early 20th century mammoth works of scholarship, the volumes of the Victoria County Histories and the Royal Commission on Historical Monuments (all now freely available online), don't seem to have ever used Rickman's terminology, preferring instead to ascribe architectural features to a century (or more precise date) rather than a style. Pevsner's use of Rickman's terms is perhaps what's really cemented them in the church-visiting public's consciousness.

** In 1763 Thomas Warton (later to become Poet Laureate) proposed the terms 'Saxon Gothic',  'absolute Gothic', 'ornamental Gothic' and 'florid Gothic', which I rather like. (By 'florid Gothic' he means very late medieval buildings such as Henry VII's Chapel at the east end of Westminster Abbey, which architectural historians now sometimes assign to a subset of Perpendicular known as 'Tudor'.)

*** There's another, lower than head height, circular window in the west wall of the south chapel, which now communicates with the porch but once did so with the original south aisle. All the authorities agree that it's 'curious' but say no more about it. It's presumably a squint (or hagioscope) through which parishioners in the aisle could witness mass being celebrated at the altar in the chapel.

**** I recognise that I'm being partisan and not completely fair here. There are of course many superb Perpendicular buildings; the choir of Gloucester cathedral will immediately spring to the mind of anyone who's seen it. The style is also especially suited to the design of towers, as found in such abundance in Somerset.

Posted by David Gouldstone at 09:36